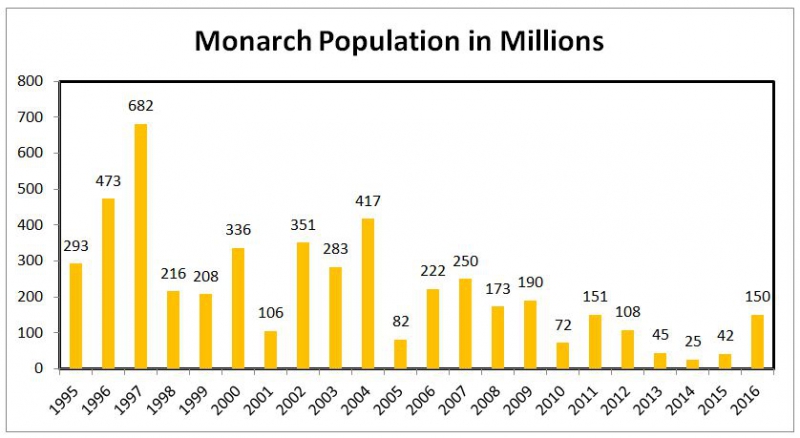 original image (838x459)
The population was expected to be up this winter due to favorable summer weather conditions in the monarch’s U.S. breeding areas, since butterfly populations fluctuate widely with changing weather. But the estimated 150 million monarchs currently gathered in Mexico for the winter still represent a population decline of 32 percent from the 22-year average — and a decline of 78 percent from the population highs of the mid-1990s. This year’s population was expected to be two to five times larger than last year’s, due to the favorable weather during the late-summer breeding season.

“The increase in monarch numbers is great news for sure, but the bottom line is that these butterflies must reach a much larger population size to be resilient to ever-increasing threats,” said Tierra Curry, a senior scientist at the Center for Biological Diversity. “So this much-loved butterfly still needs Endangered Species Act protection to make sure its amazing migration will endure for generations to come.”

“Monarch populations are still severely jeopardized by milkweed loss in their summer breeding grounds due to increasing herbicide use on genetically engineered crops,” said George Kimbrell, a senior attorney at Center for Food Safety. “Only Endangered Species Act protection will provide the scientific and legal blueprint that is needed to ensure the butterfly’s future.”

Found throughout the United States and southern Canada during summer months, most monarchs from east of the Rockies winter in the mountains of central Mexico, where they form tight clusters on trees. Scientists from World Wildlife Fund Mexico estimate the population size by counting the number of hectares of trees covered by monarchs.

Monarchs need a very large population size to be resilient to threats from severe weather events, pesticides and climate change. A single winter storm in 2002 killed an estimated 500 million of the butterflies, more than two times the size of the current population even with this year’s boost. Severe weather is expected to take a toll on the population later this winter due to the strong El Niño this year.

Climate change and logging in their Mexican habitat also threaten monarchs, whose dramatic decline has been driven in large part by the widespread planting of genetically engineered crops in the Midwest, where most monarchs are born. The vast majority of genetically engineered crop acreage is planted in varieties made to be resistant to Monsanto’s Roundup herbicide, a potent killer of milkweed, which is the monarch caterpillar’s only food. The dramatic surge in the use of Roundup and other herbicides with the same active ingredient (glyphosate) with Roundup Ready crops has virtually wiped out milkweed plants in the Midwest’s corn and soybean fields. In the past 20 years, it’s estimated, these once-common, iconic orange-and-black butterflies may have lost more than 165 million acres of habitat — an area about the size of Texas — including nearly one-third of their summer breeding grounds.

Last year the U.S. Fish and Wildlife Service announced that it will provide a total of $3.2 million to support monarch conservation, but that total is only enough to restore 1 percent of the habitat that has been lost, and will not address the most critical habitat: milkweed in agricultural areas. There is too little potential habitat outside of cropland to support a viable monarch population. Corn and soybeans dominate the Midwest landscape — the heart of monarch breeding range — leaving little area in roadsides, pastures and other land where milkweed can grow.

“Without addressing the eradication of milkweed within agricultural fields, monarch populations will not rebound to resilient, healthy levels,” said Kimbrell.

Logging on the monarch’s Mexican wintering grounds also threatens the butterfly’s survival. Although in recent years Mexican authorities had made great progress in reducing illegal logging, in August they reported that 49 acres of key habitat had been illegally logged in San Felipe de los Alzati, and in December 2015 it was reported that an additional 25 acres of the Monarch Butterfly Biosphere Reserve in Sierra Chincua had been illegally cut.

Concerns over the threats facing the monarch led the Center for Biological Diversity, Center for Food Safety and allies to petition the Fish and Wildlife Service in August 2014 to protect the butterfly as threatened under the Endangered Species Act. In December 2014 the Service announced that protection may be warranted for the monarch and commenced an official review of its status. The groups notified the agency in early January that they intend to file suit if the Service does not set a legally binding date to issue a decision on whether the butterfly will be federally protected. The agency is now late in issuing a legally required “12-month finding” that will determine whether to protect the monarch butterfly under the Act.

More than 40 leading monarch scientists, 50 members of Congress, and more than 200 organizations and businesses submitted letters to the Service in support of federal protection for monarchs.

The Center for Biological Diversity is a national, nonprofit conservation organization with more than 990,000 members and online activists dedicated to the protection of endangered species and wild places. http://www.biologicaldiversity.org

Center for Food Safety’s mission is to empower people, support farmers, and protect the earth from the harmful impacts of industrial agriculture. Through groundbreaking legal, scientific, and grassroots action, we protect and promote your right to safe food and the environment. Please join our more than 750,000 consumer and farmer advocates across the country at http://www.centerforfoodsafety.org.


http://www.biologicaldiversity.org/news/press_releases/2016/monarch-butterfly-02-26-2016.html
Add Your Comments
LATEST COMMENTS ABOUT THIS ARTICLE
Listed below are the latest comments about this post.
These comments are submitted anonymously by website visitors.