“California officials can’t even map this aquifer consistently, let alone justify turning this underground water into a garbage dump for oil waste,” said Maya Golden-Krasner, a Center attorney. “The EPA must protect the water supplies of people living near this oil field. The errors and inconsistencies in this disturbingly shoddy proposal highlight how little effort California regulators put into verifying the oil industry’s self-serving claims about this aquifer.”

The Center’s letter urges the EPA to consider contamination threats to nearby drinking water wells. The letter points to evidence that state officials have failed to acknowledge water wells within or very near the proposed aquifer boundary.

Price Canyon-area residents are deeply concerned. “State regulators have really let us down, so my neighbors and I are counting on the federal government to protect our water from pollution risks,” said Natalie Risner, who lives about a mile from the Arroyo Grande oil field. “Our water wells are so important to us, but this is an issue that should matter to every person in California. We just can’t afford to let the oil industry endanger our dwindling water supplies.”

Hydrogeologist Matt Hagemann says state officials have failed to demonstrate that the proposed exempted area is hydraulically isolated from drinking water supplies. “The claim that boundary conditions create an impermeable hydraulic barrier that would preclude the intercommunication of drinking water aquifers with oil field activities is unsubstantiated by any physical tests or computer simulations,” Hagemann writes in an analysis of the exemption proposal.

The application also does not account for Freeport's plans to increase oil production ten-fold by drilling or reworking up to 450 wells, which could dramatically change underground water pressure and movement.

This is the oil industry’s first attempt to seek an aquifer exemption following revelations earlier this year that California regulators have let oil companies drill thousands of injection wells and dump waste into scores of protected underground water supplies across the state (interactive map: http://www.biologicaldiversity.org/publications/maps/highlighted_maps/enhanced_oil_recovery_wells.html). About 90 of those unlawful wells are in the Price Canyon area.

“California’s water shortages aren’t going away, and we need to protect every drop from oil industry pollution,” Golden-Krasner said. “The EPA needs to halt the Brown administration’s profoundly irresponsible effort to give away our precious water supplies.”


The Center for Biological Diversity is a national, nonprofit conservation organization with more than 990,000 members and online activists dedicated to the protection of endangered species and wild places. 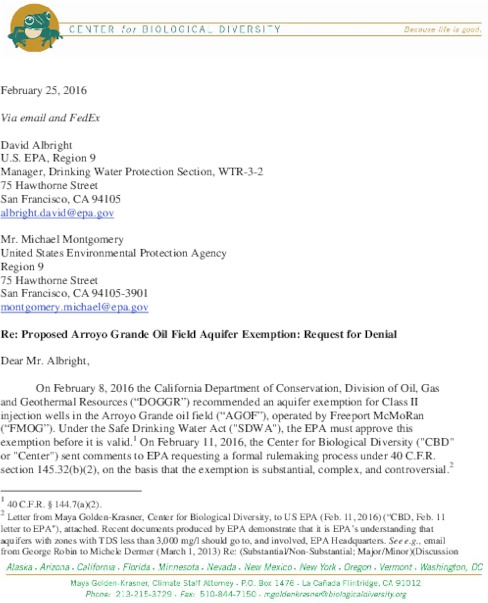