Add an Event
Newswire
Calendar
Features
Home
Donate
From the Open-Publishing Calendar
From the Open-Publishing Newswire
Indybay Feature
Publish to Newswire
Add an Event
Related Categories: Santa Cruz Indymedia | Government & Elections | Health, Housing & Public Services | Police State & Prisons
Proposed Camping Ban Amendment Set for March 8 Council Hearing
by Steve Pleich
Tuesday Feb 23rd, 2016 11:41 AM
Proposed Amendment Would Create the Right to Sleep in Santa Cruz
For several weeks, a group of concerned citizens has been meeting to strategize ways to move forward in support of the right to sleep in Santa Cruz. The group includes members of the faith community, civic leaders, advocates for people experiencing homelessness, nonprofit executives and Santa Cruz City Council Members Micah Posner and Don Lane. Lane, a former Mayor, describes the city’s existing camping/sleeping ban like this: “I do wonder what the harm is from the act of sleeping or wrapping oneself in a blanket on a cold night. And, more importantly, I wonder what the harm is when a government penalizes people for behavior they cannot and should not avoid.”

The group plans to introduce an Amendment to Section 6.36 of the Municipal Code (Camping) to remove reference to the act of sleeping and use of blankets. Among the talking points developed by the group for the campaign to generate broad community support for the proposed amendment are (1) Santa Cruz does not need a sleeping prohibition in its camping ordinance to effectively manage our public and private spaces; (2) All the activities that trouble so many community members: dirty campsites, long-term occupation of locations within parks and greenbelts, human waste depositing, etc. are fully addressed in other provisions in the Camping Ordinance, along with ordinances on littering, public urination/defecation, trespassing and “hours of use” in parks; and (3) Santa Cruz’s ban on sleeping outside has not been an effective tool in reducing the number of homeless individuals in the city, even with one of the most restrictive “sleeping” ordinances in California.

This new initiative comes at a time when federal agencies are closely scrutinizing cities and towns than continue to enforce camping/sleeping bans in the absence of adequate and available shelter. When the winter shelter program ends in mid-March, the city of Santa Cruz will literally have only a handful of beds available for the hundreds of individuals in the community without shelter. In other words, adequate shelter space does not exist. The existing ordinance would, in the opinion of the United States Department of Justice, be criminalizing some people simply because they are homeless. Additionally, the Department of Housing and Urban Development is now telling local communities that their applications for federal funding will be scored lower if criminalization of involuntary acts such as sleeping outside is part of local policy. Says Santa Cruz Housing NOW founder Linda Lemaster. “As a housing advocate, I fear that the current policies in our community prohibiting sleep may jeopardize the more than $2 million Santa Cruz receives annually from the HUD”. It is also notable that bans on sleeping are now being roundly criticized from a purely economic perspective. Scott Keyes, Senior Reporter for ThinkProgress.org writes, “Criminalization policies are problematic not only from a human rights perspective, but also because they’re costly and counterproductive. Criminalizing homelessness also hurts taxpayers. When accounting for law enforcement and emergency health care costs, numerous studies have found that leaving homeless people on the streets winds up costing taxpayers more than three times as much as simply giving them housing and supportive services.”

The group talking points also reference The United Nations Human Rights Committee statement in reference to the criminalization of homelessness in the United States: “While appreciating the steps taken by federal and some state and local authorities to address homelessness, the Committee is concerned about reports of criminalization of people living on the street for everyday activities such as eating, sleeping, sitting in particular areas etc.” This statement echoes the concerns of Santa Cruz attorney and long time homeless activist Ed Frey who says, “Sleeping is and has always been a human right that should be protected and defended by international convention. The time is right for a full throated advocacy of that right at the highest levels.”

The proposed amendment is agendized for council consideration on March 8 although it is uncertain at this time whether it will be considered at an afternoon or evening session. Until then, efforts will continue to actively lobby business and community groups in support of the proposal as sound economic and public policy as well as a call to conscience for the entire community. The working group asks everyone who supports the Right to Sleep in Santa Cruz to email the Santa Cruz City Council at citycouncil [at] cityofsantacruz.com and to come to the council session on March 8 and speak in favor of the proposed amendment. There is also a change.org petition supporters are urged to sign. 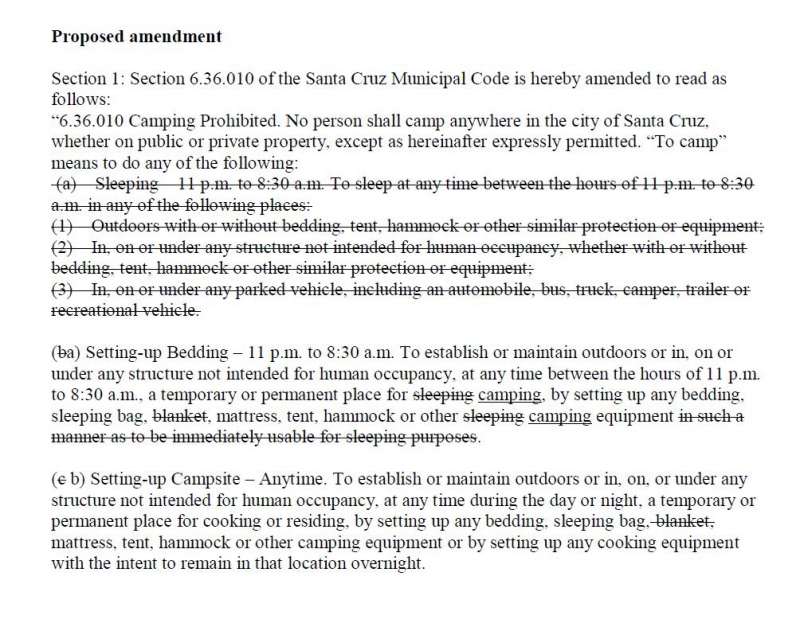 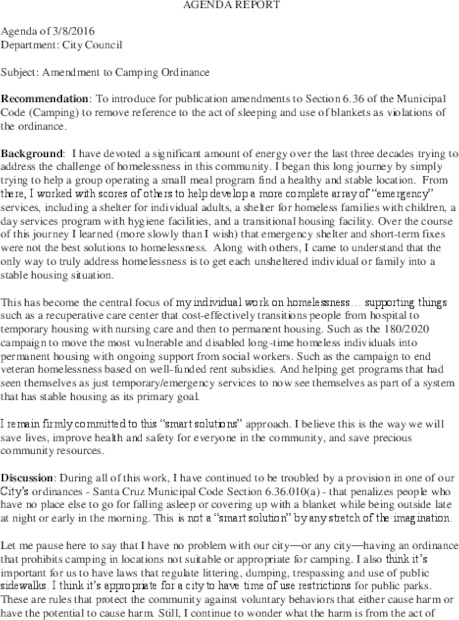 Download PDF (666.5KB)
Source: Source: https://www.facebook.com/Don.Lane.SC/posts/1093418087345991
Add Your Comments
LATEST COMMENTS ABOUT THIS ARTICLE
Listed below are the latest comments about this post.
These comments are submitted anonymously by website visitors.