by Alex Darocy (alex [at] alexdarocy.com)
This month the downtown post office in Santa Cruz was cleared by police of what had been a large and regular presence of sleepers at night. The post office had been used as shelter for 6-12 people a night for some time. A homeless man who was sleeping outside of Bookshop Santa Cruz and cited with two other sleepers for trespassing this month said he thought the police were ticketing at increased rate recently to get homeless people to move along before the next rains arrived. [Top photo: SCPD officer Dominique Hohmann places her hand on her gun as she issues a man sleeping outside of Bookshop Santa Cruz a citation.] 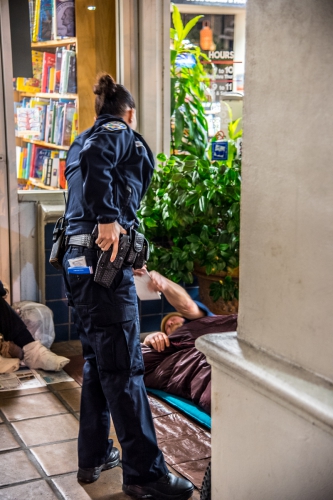 original image (801x1200)
The current enforcement patterns in the City of Santa Cruz are an extension of the homeless sweeps that began in 2012. According to Santa Cruz Police Department statistics, the number of camping ban citations issued by police officers is presently at the same level as when the department dramatically increased enforcement of the ordinance during their widely publicized series of homeless sweeps initiated in the city in July of 2012. (see chart below)

Reports have come in from a variety of sources noting that police have been methodically targeting the most common locations in in the commercial corridor of downtown Santa Cruz where homeless individuals sleep. One member of the Freedom Sleepers said this has been happening since January. The Freedom Sleepers are a group of activists who have been sleeping at Santa Cruz City Hall on Tuesday nights since July 4 to protest local laws that criminalize homelessness. Additionally, many of the Freedom Sleepers believe that sleeping as part of a larger protest group at city hall has provided them some level of safety from law enforcement.

One of the three sleepers cited at Bookshop Santa Cruz this month was a 59-year-old woman who had no bedding. She was using her jacket to cover herself as she crouched and reclined somewhat while sitting on several thin layers of newspaper. (see photos below)

A grey-haired man next to her used cardboard as a sleeping pad on the tile walkway. He covered himself with a blanket and a lightweight sleeping bag that was unzipped and opened up.

The third person used a higher quality sleeping bag and slept on a manufactured sleeping pad on top of a tarp.

The three people were sleeping outside of an unused entrance to the bookstore, on the Front Street side of the building, in the middle of the night. All three were elders and were sleeping with a minimal amount of possessions.

Officer Dominique Hohmann, of the Santa Cruz Police Department, was the first police officer on the scene. She began writing up the paperwork for the first citation before any of the three sleepers were awake, and before a back-up officer arrived.

She then woke the first person up and gathered his personal information as he lay in his sleeping bag.

When it came time for him to sign the citation, Hohmann leaned down to hand it to him while placing her free hand on her gun The move clearly demonstrated how potentially volatile the situation was.

She kept her hand on her gun during the entire encounter with the man.

Back-up officer David Gunter then arrived in another patrol vehicle.

With Gunter close to her, Hohmann continued to hold her gun in the same manner while issuing the next two people their citations.

According to Hohmann, Bookshop Santa Cruz has a trespassing complaint letter filed with the City Of Santa Cruz that gives police the authority to automatically cite individuals for trespassing if they are seen on the property after hours.

The first person cited told police this was not true.

He claimed that Bookshop Santa Cruz had no such letter filed and he did not believe that the people sleeping there were in violation of the law.

When another of the three asked why they were being cited for trespassing, Hohmann said it was just one of the laws that she could potentially write them up for. She said she could also write them up for lying on the sidewalk and for "camping."

"If you prefer a camping one, I can write you for that also," she said in a condescending tone.

Without waiting for an answer, Hohmann told the woman to "have a great night" before returning to her patrol vehicle.

Before she left, the man who claimed Bookshop Santa Cruz did not have a trespassing complaint on file with the police shouted that he would, "see her in court."

Neither of the officers on the scene provided the group with any information about places they could sleep legally or safely.

Incidents occurring on other evenings in February reveal details of the energy Santa Cruz police direct towards homeless people sleeping at night downtown.

At about 11:30 pm on one evening this month, two Santa Cruz police officers confronted a person who was sleeping in front of the downtown Santa Cruz post office. The person was sleeping with barely any supplies at all when he was woken up and cited. (see photos below)

At about 1am on another evening this month, a Santa Cruz police officer and his sergeant were called to the Santa Cruz Civic Auditorium by a First Alarm security guard in order to move along a homeless person sleeping outside one of the Center Street side exits of the building.

The sergeant told him that "City Hall" had a trespassing complaint letter on file with the police department and that they would cite him for trespassing if he did not leave.

The homeless man said the first Alarm guard had asked him to leave his sleeping spot at the Civic, but that he did not leave fast enough for the guard The guard then grabbed at the man's bicycle, which was locked to a hand rail, and attempted to forcibly move it away from the civic auditorium. That was when the guard called the police on the man Police did not issue him a citation and the homeless man left after the warning.

The homeless sweeps by police have come at a great cost to the city.

In 2012, SCPD statistics showed that 42 percent of all arrests and 32 percent of all citations issued by the department were for "nuisance crimes" related to the homeless population. An article published in 2013 in the Santa Cruz Sentinel reported that assistant city manager Tina Shull estimated the police response to incidents involving the homeless would cost the city around $1 million annually when applying that year's police data.

Additionally, the city contracted with First Alarm to patrol downtown Santa Cruz for $350,000 at that time.

Data from the Santa Cruz Police show that the number of citations issued for illegal camping has skyrocketed since the department, along with the department of Parks and Recreation, initiated the homeless sweeps in 2012. The decision to initiate those sweeps were departmental, and never went before the city council for approval.

At the city council's most recent public safety study session held on November 3, Deputy Chief of Police Rick Martinez explained the increase in citations in 2012 was the result of the establishment of a "camping" hotline by the SCPD and the city's parks department. The sweeps are supported by a "directed enforcement team," which focuses on targeting homeless sleeping sites in the city.

In 2014 the number of camping citations issued by police reached a recent high. Martinez gave a breakdown of those statistics.

Martinez noted that many nuisance citations are issued at business locations that have a trespassing complaint on file with police, but he did not go into specifics, and the statement seems to be contradicted in the "Nuisance Crimes Citations" chart that was included in the public safety presentation. The chart shows trespassing citations have remained at a constant before and after the initiation of the 2012 homeless sweeps.

The statistics presented by police at the study session did not include the number of times homeless people were contacted by police when a citation was not issued.

Neither was the overall cost of contacting, citing, and arresting so many homeless individuals. 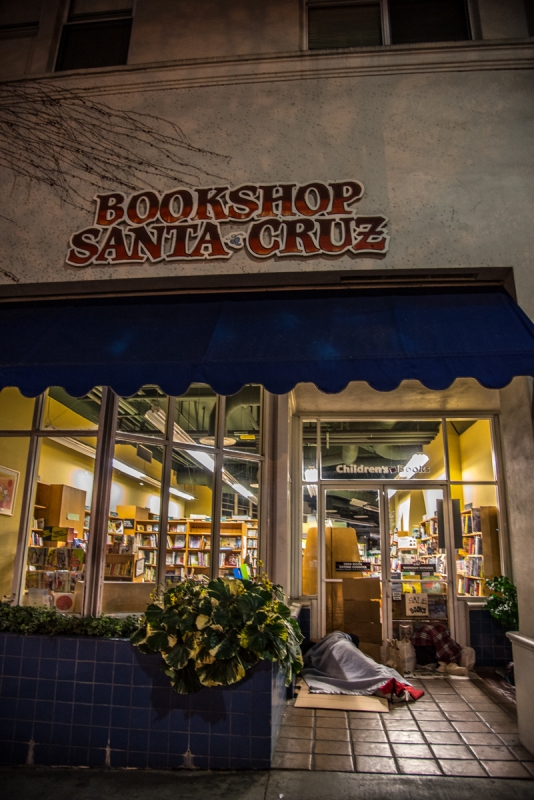 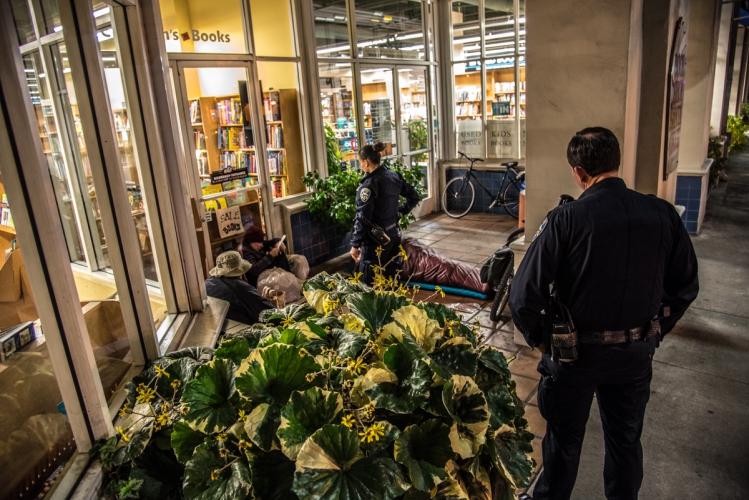 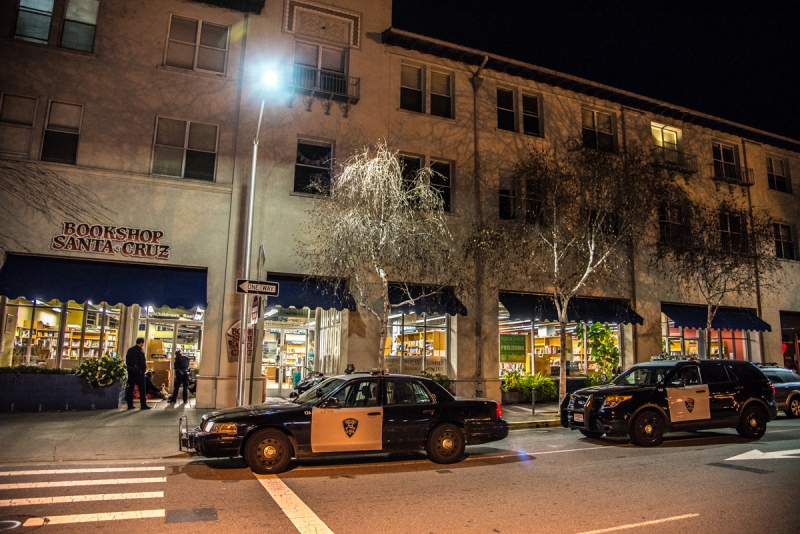 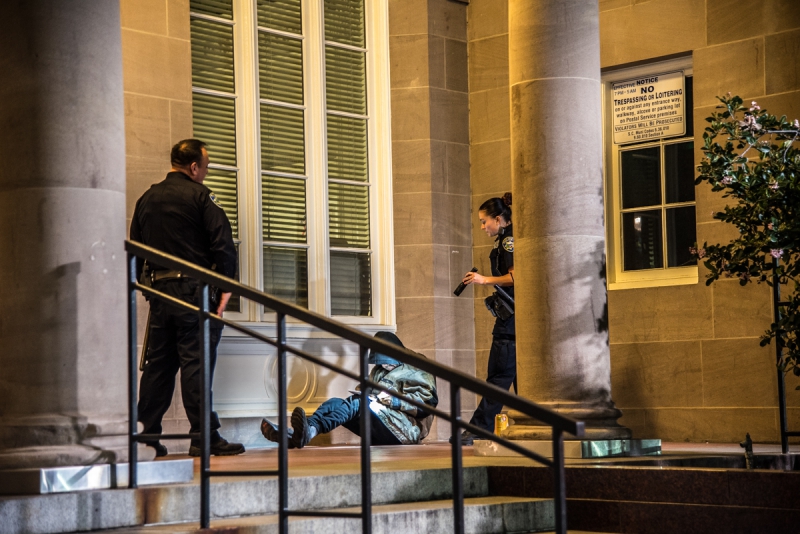 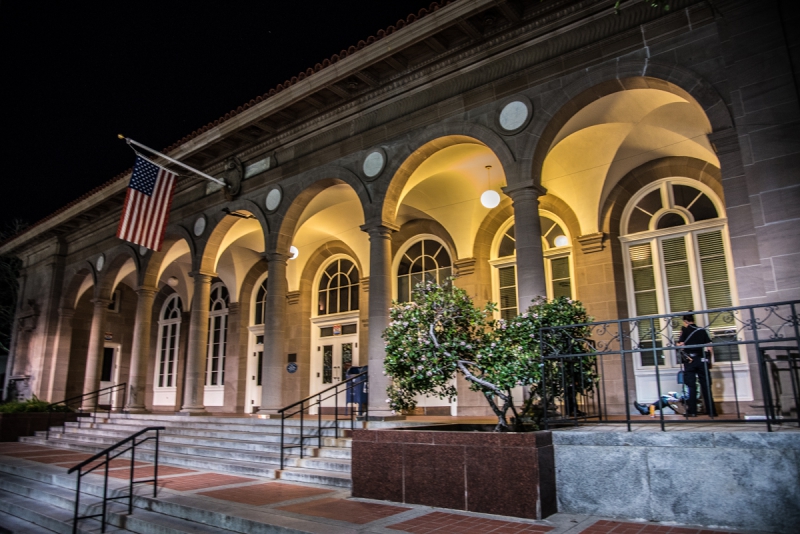 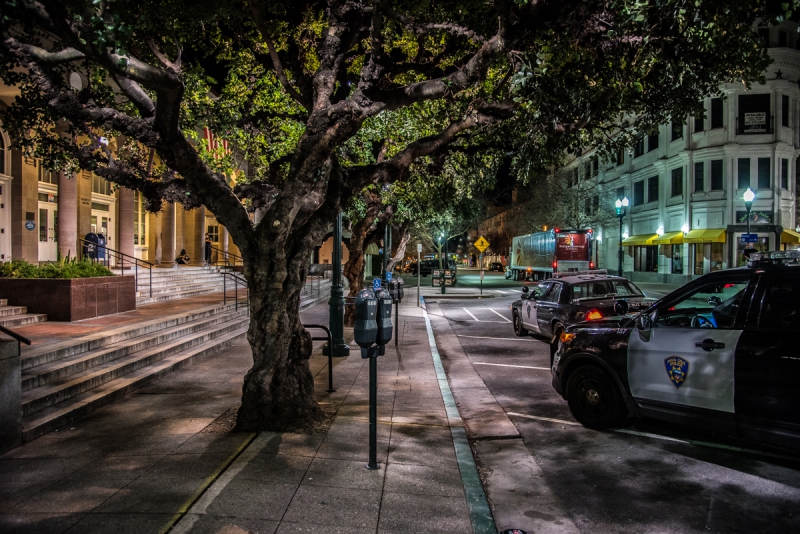 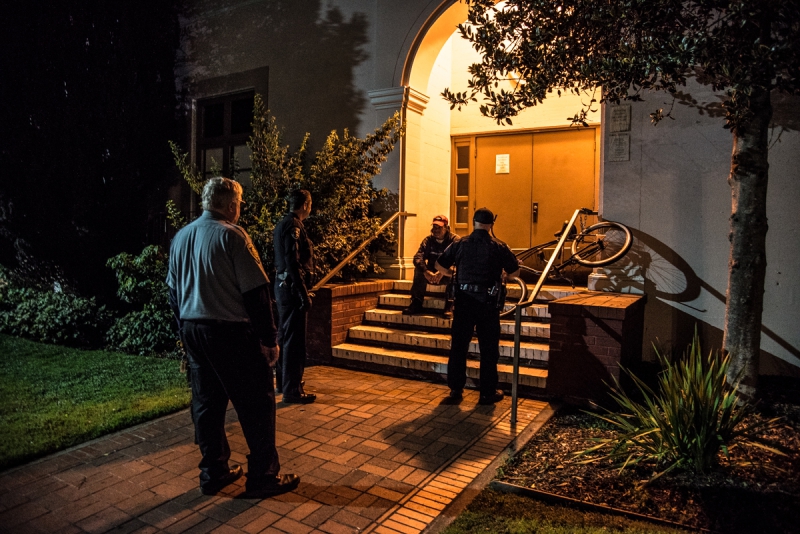 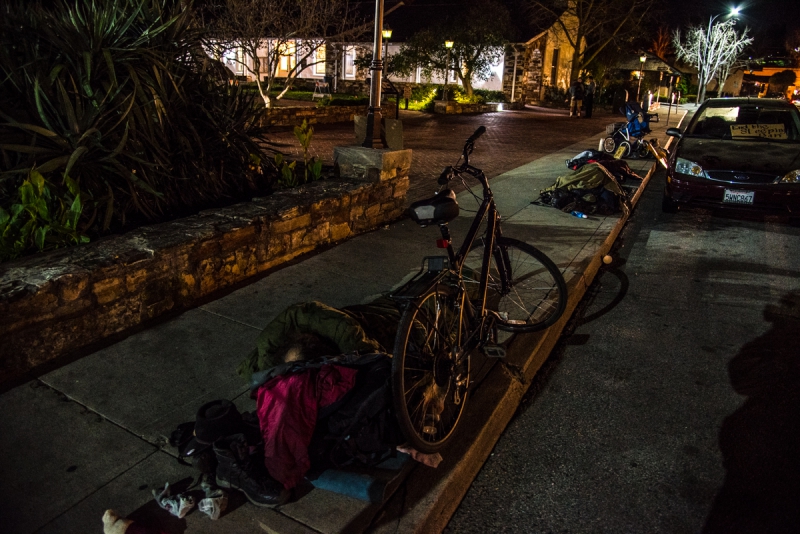 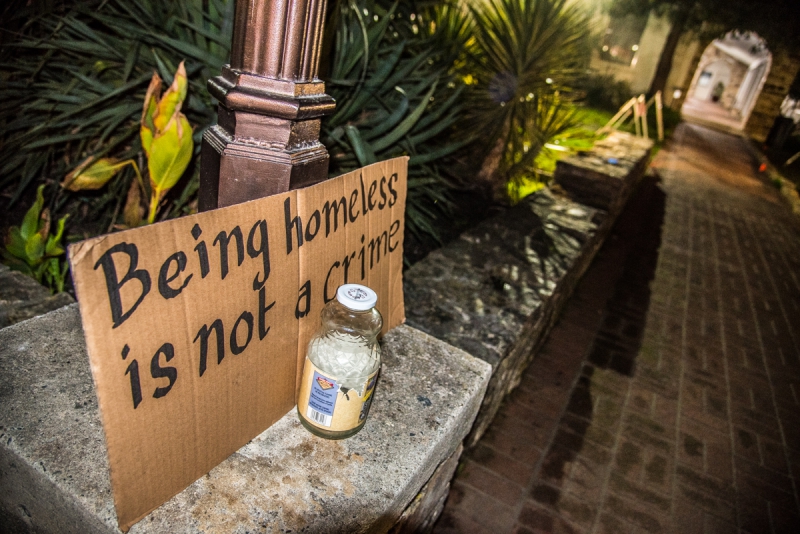 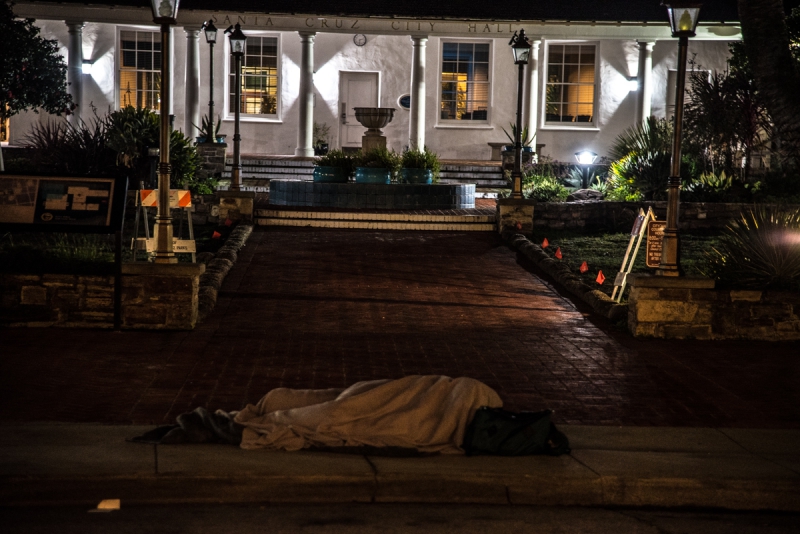 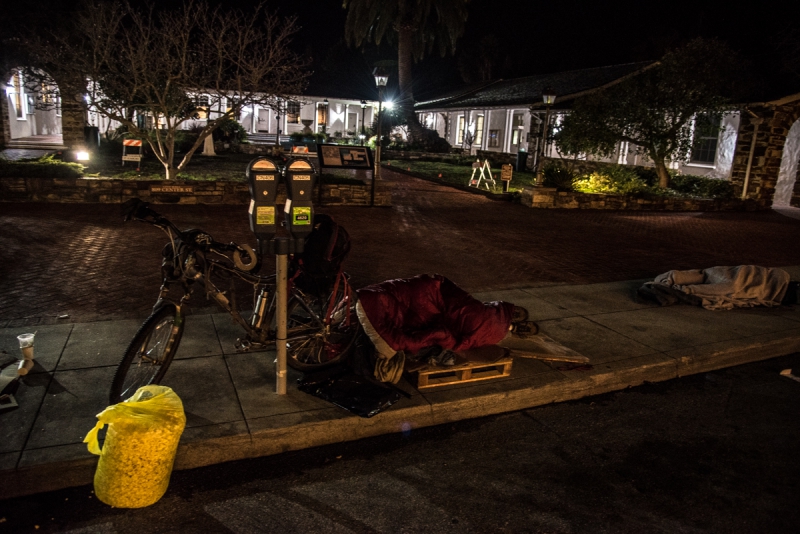 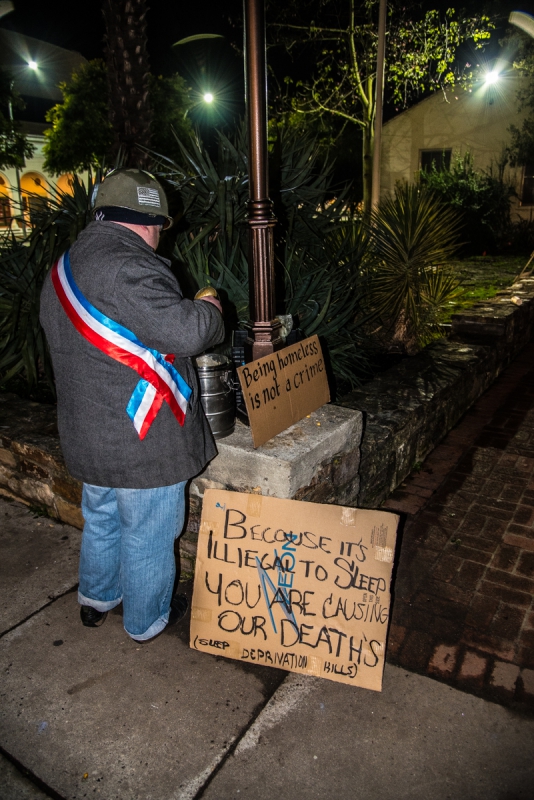 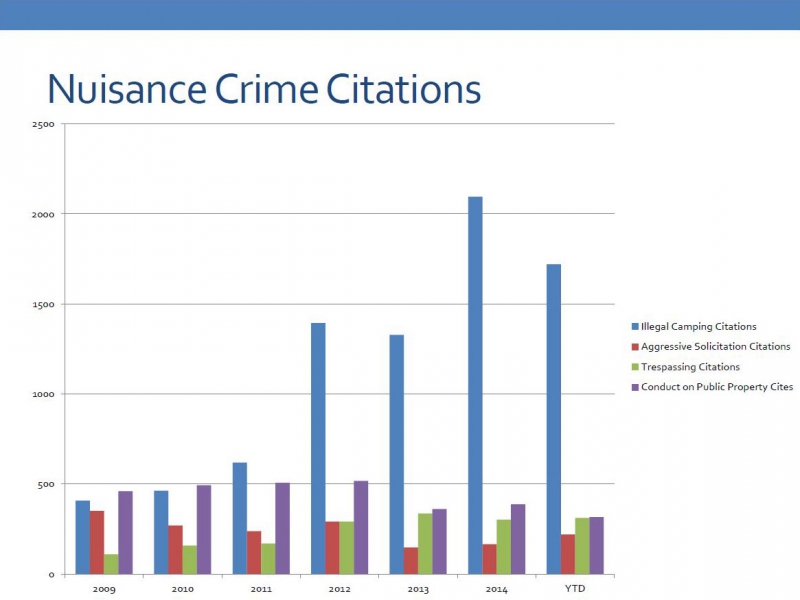