Add an Event
Newswire
Calendar
Features
Home
Donate
From the Open-Publishing Calendar
From the Open-Publishing Newswire
Indybay Feature
Publish to Newswire
Add an Event
Related Categories: California | Central Valley | Environment & Forest Defense | Government & Elections
Crab and salmon fisheries threatened by a 'historic crisis'
by Dan Bacher
Monday Feb 15th, 2016 8:19 AM
“This forum works, but the fishermen are not,” said Senator Mike McGuire, Chair of the Committee, in his opening comments. “The salmon and crab fisheries are threatened by a historic crisis. We’re facing a fishery disaster that will impact many families.”

Beautiful Sacramento River Chinook salmon like this one are threatened by the mismanagement of Central Valley reservoirs by the state and federal water agencies during a drought, massive water exports from the Delta, the plan to raise Shasta Dam and Governor Jerry Brown's Delta Tunnels Plan. Photo by Dan Bacher. 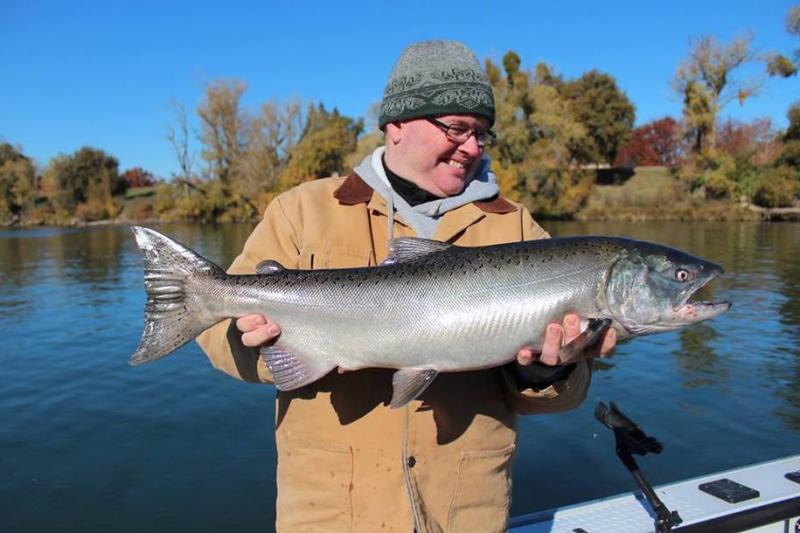 Legislators, members of commercial fishing families, fishing group representatives and Brown administration officials testified about the dire situation that the salmon and crab fishery is in during the 43rd Annual Zeke Grader Fisheries Forum of the Joint Committee on Fisheries and Aquaculture held at the State Capitol in Sacramento on February 11.

“This forum works, but the fishermen are not,” said Senator Mike McGuire, Chair of the Committee, in his opening comments. “The salmon and crab fisheries are threatened by a historic crisis. We’re facing a fishery disaster that will impact many families.”

“We’ve gone from abundance to scarcity. The crab fishing fleet is sitting at the docks right now,” said McGuire.

McGuire said the crab fishery is worth $46 million to the California economy — and is worth up to $250 million once you calculate all of the money that it generates to the coastal economy.

Citing CDFW figures, McGuire said the commercial salmon fishery income has declined from $52 million in 2013, to $31 million in 2014, to $15.5 million in 2015 (according to preliminary estimates). Due to lower than expected returns on both the Sacramento and Klamath systems, things are expected to be even worse this year.

McGuire thanked Governor Brown and CDFW Director Chuck Bonham for sending a letter to the U.S. Secretary of Commerce requesting federal disaster relief for the commercial fishing industry this week. However, he said and other legislators indicated this is disaster relief is by no means a “slam dunk” because it depends on an Act of Congress to appropriate the needed money.

“These are truly desperate times,” Senator McGuire emphasized. "Imagine losing 75 to 100 percent of your annual income, and trying to survive.”

In a letter to U.S. Secretary of Commerce Penny Pritzker, Governor Brown on February 9 requested federal declarations of a fishery disaster and a commercial fishery failure in response to the continued presence of unsafe levels of domoic acid, a potent neurotoxin, in Dungeness and rock crab fisheries across California and the corresponding closures of those fisheries. (http://nrm.dfg.ca.gov/FileHandler.ashx?DocumentID=116284)

Something’s going on in the ocean

State officials and scientists spoke on the unprecedented changes in the ocean believed to be impacting crab, salmon and other fish populations.

“Something’s going on in the ocean, and it’s not right, and it doesn’t fit our historical understandings,” Bonham told the Committee.

In addition to the crab closure caused by domoic acid, a neurotoxin found in the algae bloom along the coast, he pointed to a number of ecological disasters. These include the massive deaths of sea stars, the decline of the squid fishery, the closure of the sardine fishery, the decline of kelp habitat and the loss of most of the red sea urchins north of San Francisco recently.

Southern species such as wahoo are showing further north, while sea snakes have been seen off Southern California coast.

“This should be an alarm to the general public to stay aware and engaged in this ecological change that’s going on in the ocean,” Bonham said.

“The outlook for the salmon fishery is not good." either, said Bonham. He said the fall salmon returns on both the Klamath River and Sacramento River systems are below the escapement objectives set by the Pacific Fishery Management Council (PFMC), pointing to season restrictions this year.

However, he said that “all is not gloom and doom,” noting a few successes in coastal coho runs and other fish populations.

“The coho run on the Noyo River in Mendocino County this fall was at a 15 year high and the coho redd (nest) count on Lagunitas Creek was 269, beating the previous high count of 250,” said Bonham.

In addition, the CDFW’s pelagic rockfish survey was the highest it’s been in 30 years, said Bonham.

Dr. Clarissa Anderson from the Institute of Marine Sciences at UC Santa Cruz reported that the domoic acids in the ocean are at a record high,

“We have been measuring pretty routinely and have seen that every year it seems to get a bit worse," Anderson stated. "There have been a few dips in there, but in the last five, six, seven years, we start to see an unprecedented level every year.”

Don Marshal, PCFFA board member, was supposed to testify, but could not attend because he was working a part time job that day to make ends meet.

“My husband is a second generation fisherman and my son is a third generation commercial fisherman. We’ve always had some reserves saved up coming into the crab season,” she said.

However, other fishermen are not so fortunate, and she started a fund me facebook page for commercial families impacted by the crab closure that has raised $5500 to date. She has received requests from as far north as Crescent City to help the families out in these hard times.

She also said she has had to rely on her business, a chicken and egg business, to pay their expenses during the closure.

French said food banks have been set up in Bodega Bay, Crescent City and elsewhere to provide food for commercial fishing families.

“I cannot begin to describe what B.S. it is to ask for food for people who provide the food for other people’s tables,” she said.

Changes in river and reservoir operations proposed to restore salmon

Dave Bitts, President of the Pacific Coast Federation of Fishermen’s Associations, and John McManus, Executive Director of the Golden Gate Salmon Association, spoke on the status of salmon fisheries.

McManus said one solution to successfully growing fatter and healthier salmon is to more fully utilize flood plains in the Sutter Bypass and Yolo Bypass during their downstream migration. He said these bypasses could be operated to allow greater access to juvenile salmon, providing for a more resilient fish population.

He also said the Department of Water Resources should change the way it operates the Thermalito Afterbay to make the water cooler when it is released into the Feather River, including the possible creation of a bypass canal.

Other changes in the operation of Central Valley reservoirs that could help prevent the winter run Chinook disasters of the last two years from occurring include fixing the temperature control curtains at Whiskeytown Reservoir. “The water coming from Clear Creek out of Whiskeytown Reservoir into the Sacramento River is now warmer than the Sacramento River itself,” said Dr. William Duffy, Chair of the California Advisory Committee on Salmon & Steelhead Trout.

McManus noted that the trucking of 100 percent of the fall chinook salmon from the CDFW’s Feather River, Nimbus and the Mokelumne River fish hatcheries and the federal Coleman Hatchery to the estuary in 2015 and all of the smolts from the state hatcheries and 8 million smolts from Coleman in 2014 could serve as a “bridge”in the fishery between the drought years and 2017 and 2018.

After the reports were finished, over a dozen people commented on an array of issues concerning fisheries, ranging from opposition to Governor Jerry Brown’s Delta Tunnels to how foreign farmed fish have replaced sustainable local live halibut and starry flounder fisheries because of current California commercial fishing closures.

Commercial and sportfishing groups and Tribal leaders have strongly criticized the Bureau of Reclamation and Department of Water Resources for emptying Trinity, Shasta, Oroville and Folsom reservoirs during the drought in order to export Delta water to corporate agribusiness interests on the west side of the San Joaquin Valley, Southern California water agencies and oil companies conducting fracking and other extreme oil extraction methods in Kern County. The draining of the reservoirs resulted in lethally warm water conditions for winter-run and fall-run Chinook salmon on the Sacramento River over the past two years.

Salmon and steelhead are not only are threatened by the mismanagement of Central Valley reservoirs by the state and federal water agencies during a drought and changing ocean conditions, but by Governor Jerry Brown's California Water Fix project to build the Delta Tunnels and a federal plan to raise Shasta Dam. Both plans are opposed by the Winnemem Wintu Tribe and other Tribes, environmental organizations and fishing groups.

Note: On the day this forum was held, recreational Dungeness crab fishing season on the California Coast south of Point Reyes in Marin County opened. The commercial Dungeness crab fishery remains closed statewide, although it could potentially open this week.(https://cdfgnews.wordpress.com/2016/02/11/recreational-dungeness-crab-fisheries-open-south-of-point-reyes)
Add Your Comments
LATEST COMMENTS ABOUT THIS ARTICLE
Listed below are the latest comments about this post.
These comments are submitted anonymously by website visitors.