by Occupy the Farm
For the second time this year, farm defenders halted construction on the Gill Tract farm in Albany, CA. Five farm defenders are sitting in silent meditation on the path of heavy machinery that was removing the topsoil, and plan to remain there as long as possible to halt at least another day of construction over the contested farmland. 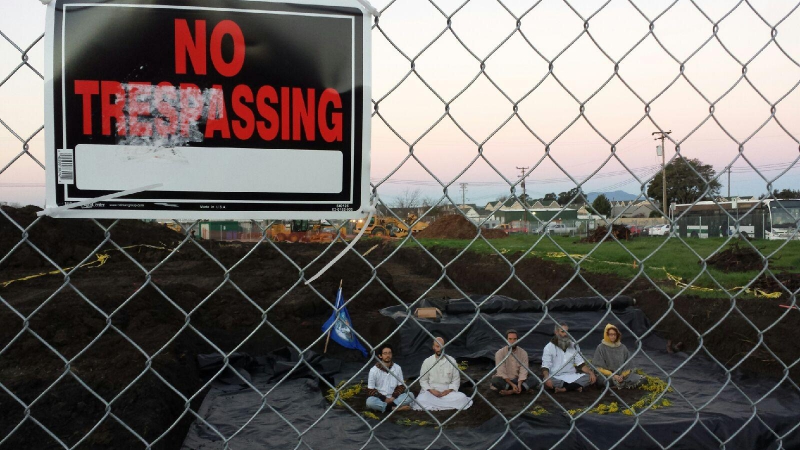 Contractors began work on the southern portion of the Gill Tract in January, and last week several truckloads of healthy topsoil began to be removed from the historical farm. The Gill Tract was sold to the University of California in 1928 under the condition it would be used for agricultural research and education.

"The Gill Tract represents the global struggle to restore caring relationships with Mother Earth and the contest between resource and human exploitation and healing connections," explained Pancho Ramos in a pre-released statement, one of the protesters sitting in silent meditation. The group Occupy the Farm vows to continue disrupting construction until the UC and its corporate partners cancel construction projects on the land. Such tactics of disruptions and delays in construction, increasing costs beyond expected, has effectively caused several other socially and environmentally contested projects to be cancelled in the US and elsewhere.

The group Occupy the Farm removed surveying stakes placed the week contractors started working on the Gill Tract, and disrupted also the first five days of the new Sprouts supermarket in Oakland with a campaign for the community to boycott Sprouts. All construction was halted at the Gill Tract on January 28th when two members of Occupy the Farm locked themselves to an excavator.

Community members, students, and UC faculty have put forth an alternative proposal to use all twenty acres of the historic Gill Tract as a Center for Urban Agriculture and Food Justice, serving the University of California’s mission of research and education for the public good, while also operating as a productive urban farm that provides students, workers, and community members with access to affordable local produce. This proposal better aligns with UC President Napolitano’s Global Food Initiative as well as the sustainability and climate mitigation policies of the state of California.

“The UC administration's argument for privatization and construction is shortsighted and irresponsible”, explains Gustavo Oliveira, a member for Occupy the Farm. “The UC could embrace the vision of agroecology for this land to generate three times more revenue than it is obtaining through the privatization of this valuable public asset.”

Stanford has raised over $3 million since it launched the O'Donohue Family Stanford Educational Farm in 2014, and they accomplished this with significantly less academic resources and prestige than the University of California holds on urban agriculture and agroecology.

Occupy The Farm uses a broad spectrum of tactics, including direct action, to reclaim and expand the commons for sustainable farming and community education. We are building a network of relationships with nature and each other that will sustain us, respect our common human heritage, and unite us in our struggles against oppression. Our goal is to heal our ecosystems, expand biodiversity, and embrace the wisdom of indigenous & traditional practices of stewardship and knowledge of the land, as we work to dismantle the systemic injustices which have separated people from these central relationships.

The privatization and construction launched on the site has been contested by students, faculty, and members of the community for almost two decades. In 2004, the UC Regents approved commercial development despite years of campaigning by students, faculty, and community members for the preservation of the land for urban agriculture and food justice, and proceeded bulldozing greenhouses in 2008 and contracting with Whole Foods for development of the site.

In April 2012, Occupy the Farm reenergized this struggle by camping on the land and planting a publicly-accessible farm on the Gill Tract. Under pressure, Whole Foods pulled out of the proposed development, and the UC administration granted protection for a portion of the land, some of which is now the vibrant Gill Tract Community Farm.

However, the 7 acres of the southern portion of the Gill Tract remains slated for development with a shopping center anchored by Sprouts supermarket, a hihg-end senior housing complex, and a parking lot. UC Capital Projects now seeks to implement this project despite another occupation in May 2013 and other mobilizations on the land in 2014 and 2015, two lawsuits, an Albany City referendum effort, broad based and constant community participation at the Albany City Council in favor of preserving the farmland for agricultural use, and an ongoing campaign for Sprouts to drop its proposed construction project over the Gill Tract. 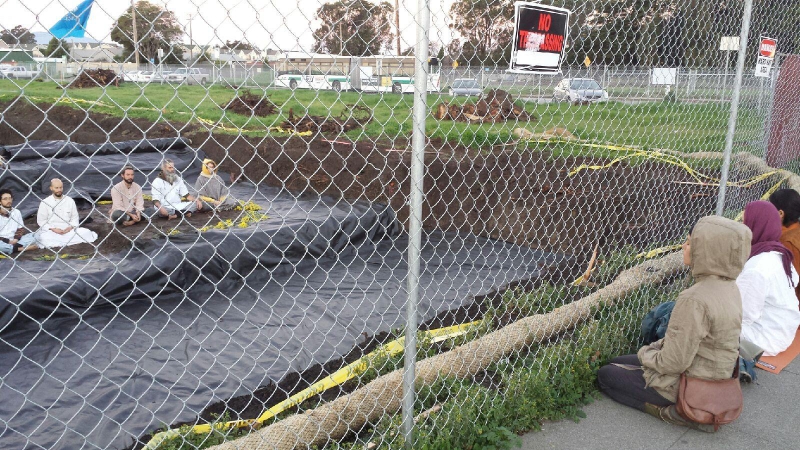 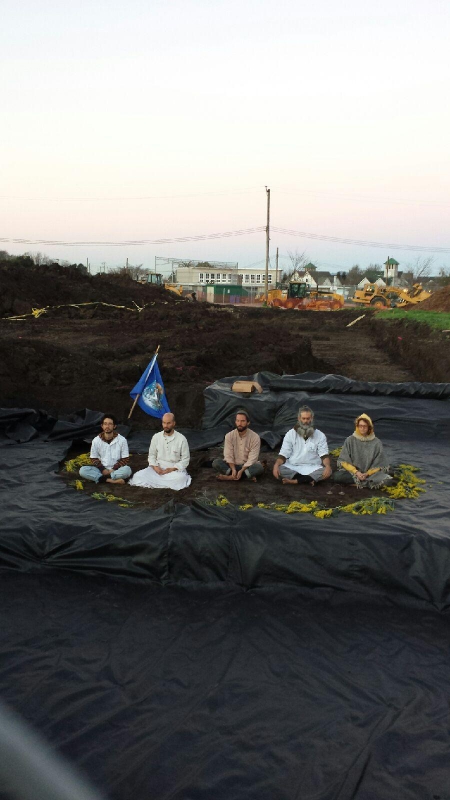 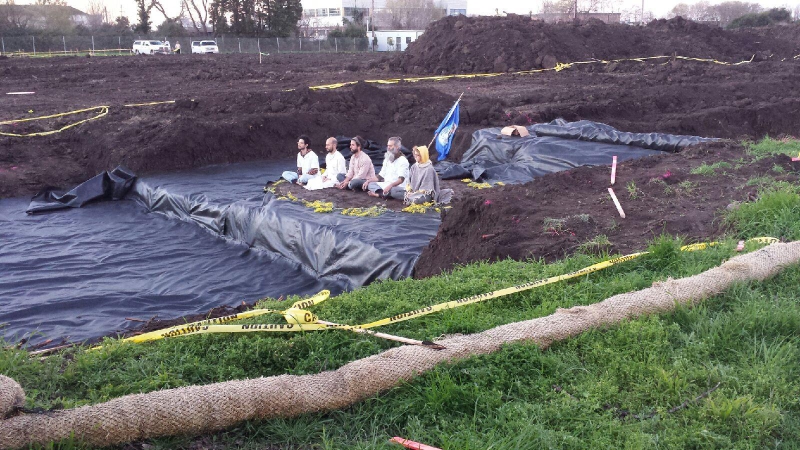 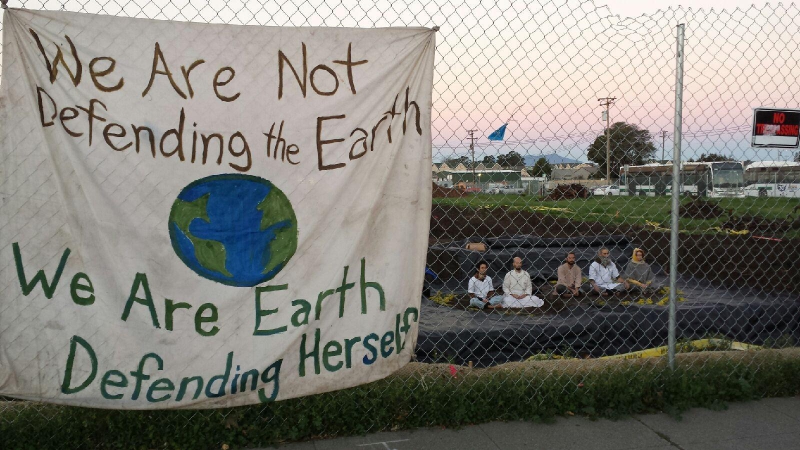 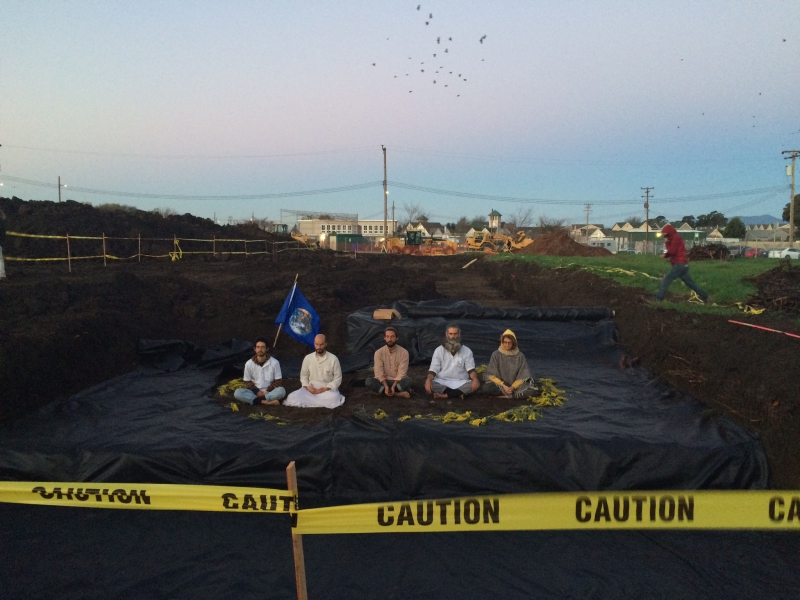 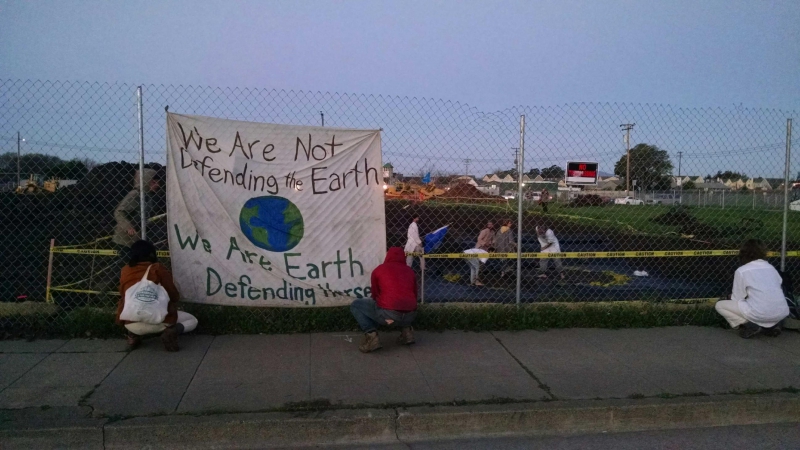 original image (2592x1459)
§Video from today's action to halt construction
by Occupy the Farm
Copy the code below to embed this movie into a web page:
Download Video (42.0MB) | Embed Video
(video 1:45)

Add Your Comments
Comments (Hide Comments)
§UPDATE: Three Arrested in Disruption of Construction at the Gill Tract
by Occupy the Farm
New video footage of the February 8 silent meditation to preserve farmland.
END_OF_DOCUMENT_TOKEN_TO_BE_REPLACED
Add a Comment
Support Independent Media
We are 100% volunteer and depend on your participation to sustain our efforts!