by D. Boyer
No business as usual, and ICEoutofSF were the mantra's being communicated at a protest over the treatment of immigrants in downtown San Francisco on Wednesday January 26, 2016. Women, men, teenagers, and children blocked two intersections in San Francisco's Financial District for several hours culminating in the arrests of at least 15 of them over the treatment of immigrant's by the U.S. Federal government.
Video and Photos from that protest.
Copy the code below to embed this movie into a web page:
Download Video (87.9MB) | Embed Video
Recently and only weeks after San Francisco swore in newly elected Sheriff Vicki Hennessy a person by the name of Pedro Figueroa was detained by the San Francisco Police Department for simply reporting that his car was stolen. As part of that process the victim has to give the police identifying documents such as a drivers license and proof of ownership. Figueroa handed over the documents at which time the police "ran his name," and found warrants. So he was briefly detained by SFPD. The San Francisco Sheriff's Department called the Immigration and Customs Enforcement Department aka ICE as part of their process. However Figueroa was released because there "were no details on the warrant." Coincidentally an ICE agent was parked outside the Southern Police Station in San Francisco when he was released. The ICE agents took him into custody. ICE said “The Fugitive Operations officers targeted Mr. Zarceno-Figueroa for arrest based upon his conviction for DUI and an outstanding order of removal issued by an immigration judge in 2005. Mr.Zarceno-Figueroa’s case is now being reviewed by the immigration courts to determine whether he has a legal basis to remain in the U.S.” Pedro Figueroa is from El Salvador.

That is just one more horror story featuring recent immigrants, so they take to the streets and protest and peacefully assemble and risk arrest to get their voices heard. Their are hundreds of other horror stories over the treatment of recent immigrant's by the US Federal government. Until their demands are met they promise there will be no business as usual.

Their demands are "Stop the Raids, and Stop the Deportations, #ICEoutofSF, and an end to the systemic abuse by an outdated immigration system. It appeared that at least 15 people were arrested, and taken away in paddy wagons.
Related Categories: San Francisco | Immigrant Rights | Police State & Prisons
§Protesters blocked 2 intersections in downtown San Francisco
by D. Boyer 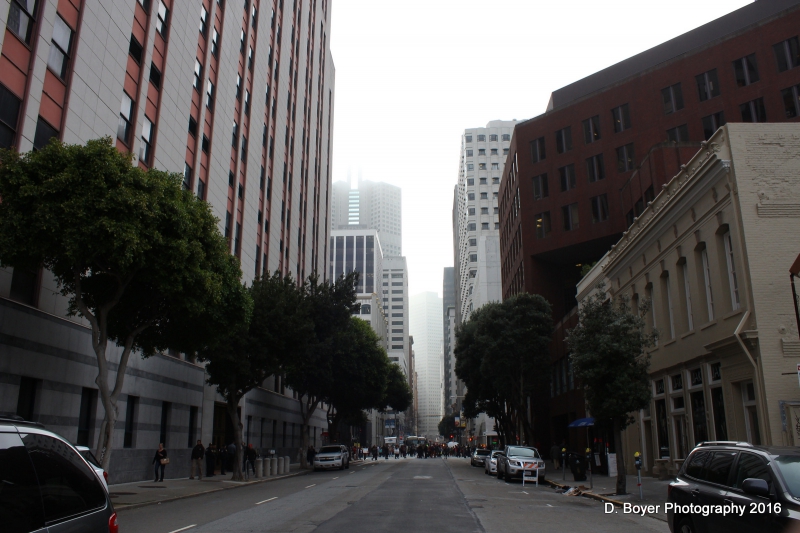 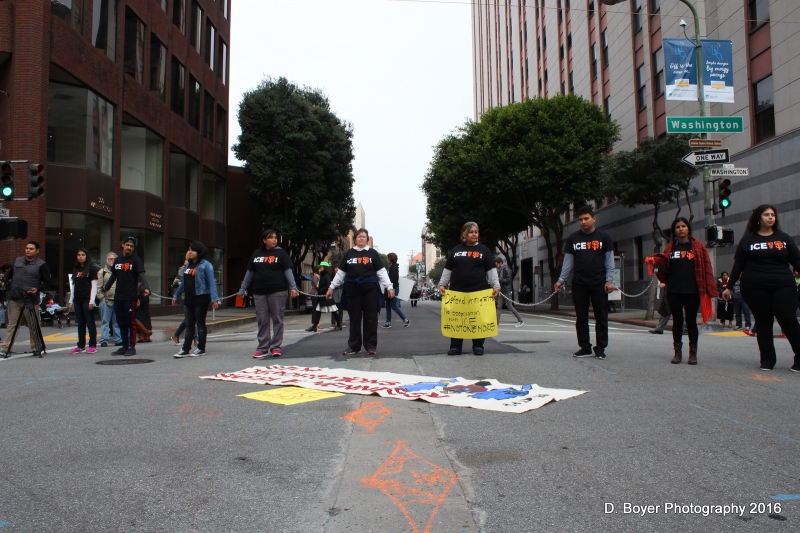 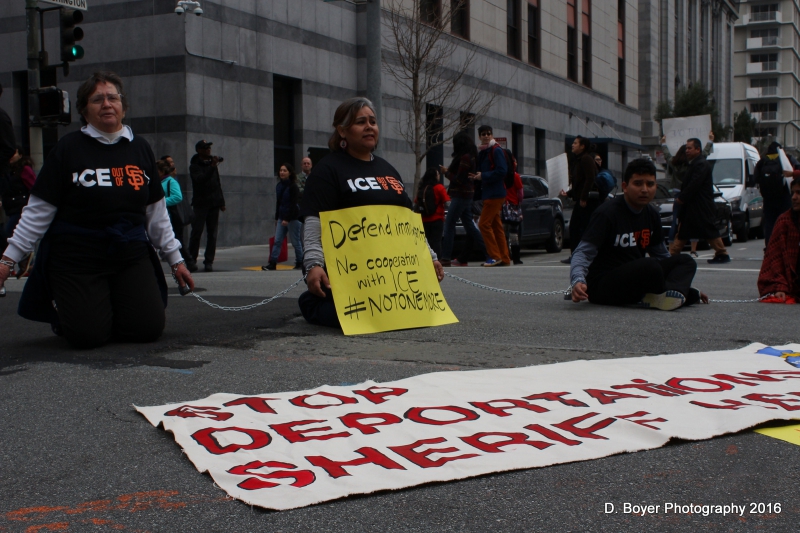 original image (1600x1067)
§Stop the Criminalization of the Immigration Communities.
by D. Boyer 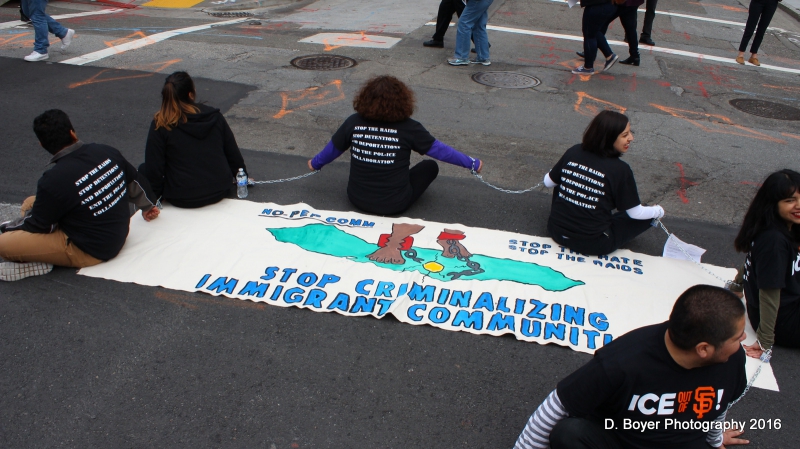 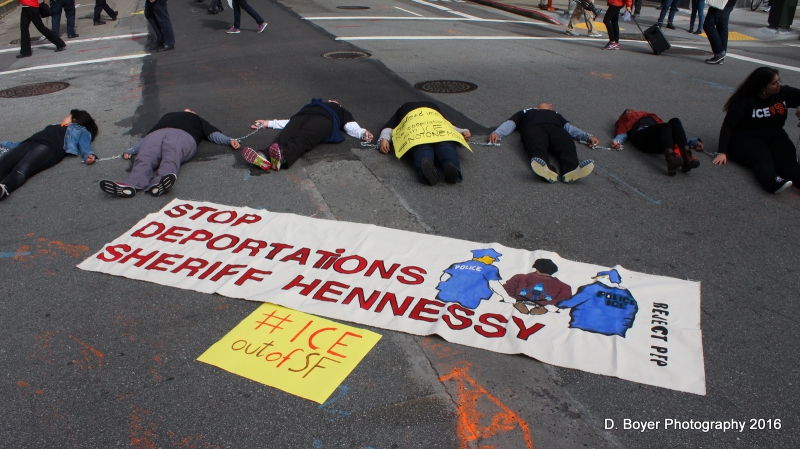 original image (1600x899)
Sheriff Vicki Hennessy can choose whether to communicate with ICE during an arrest of an immigrant.
§Risking Arrest
by D. Boyer 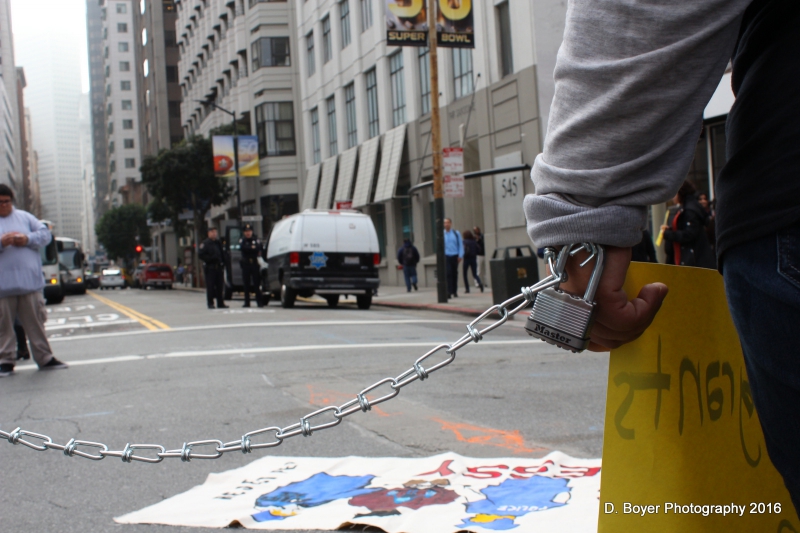 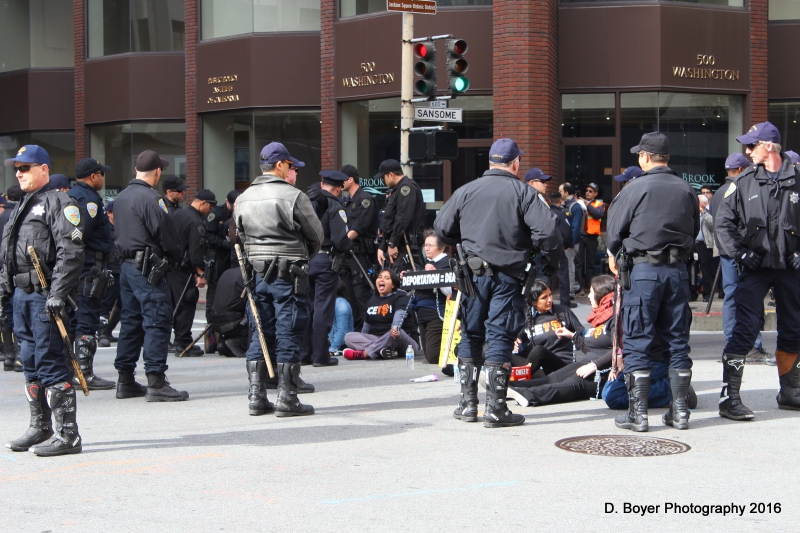 original image (1600x1067)
SFPD allowed them to peacefully assemble for hours before declaring it unlawful.
§signage
by D. Boyer 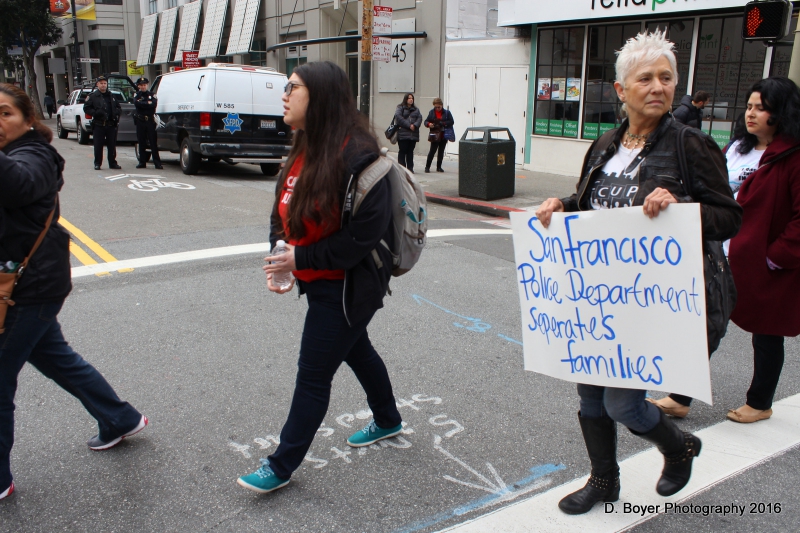 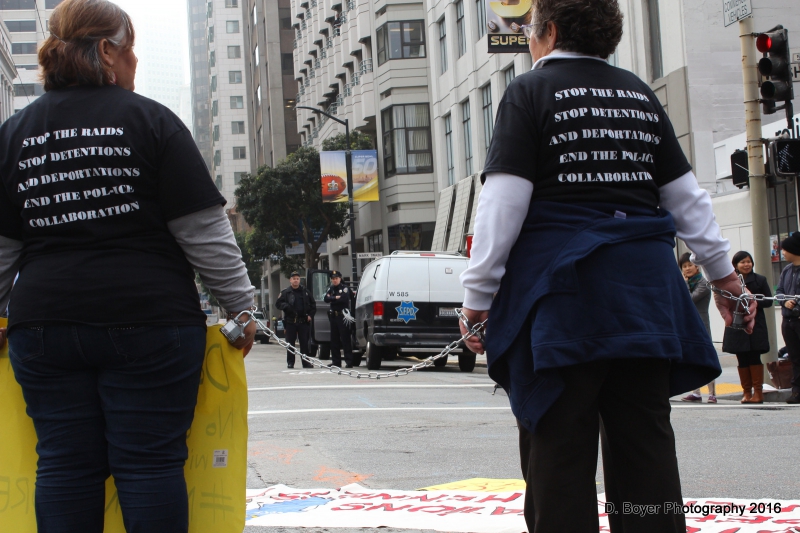 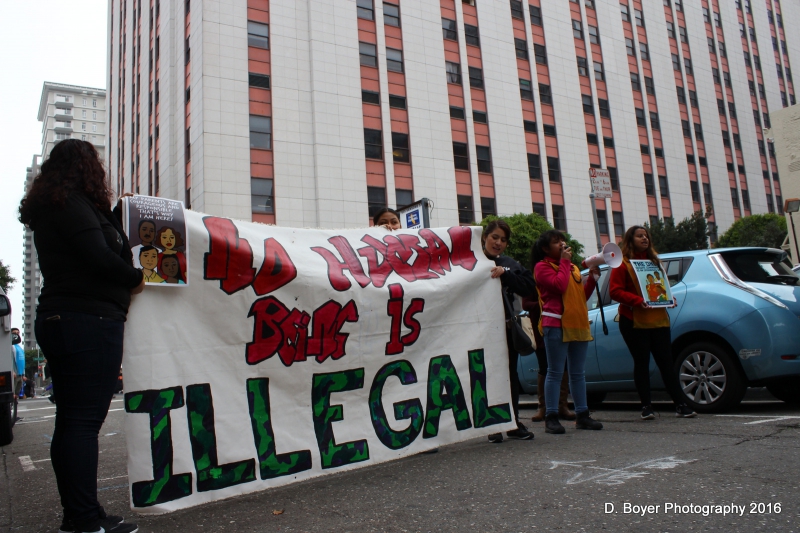 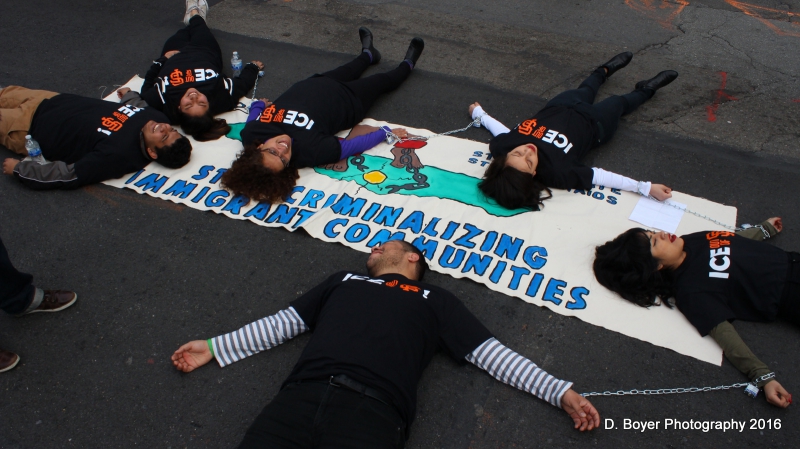 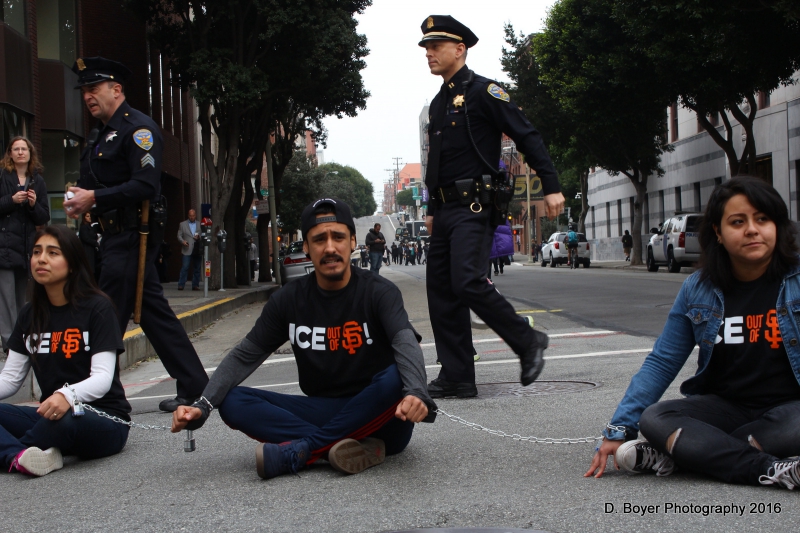 original image (1600x1067)
§Young adults risking arrest and chained together they still made their voices heard.
by D. Boyer 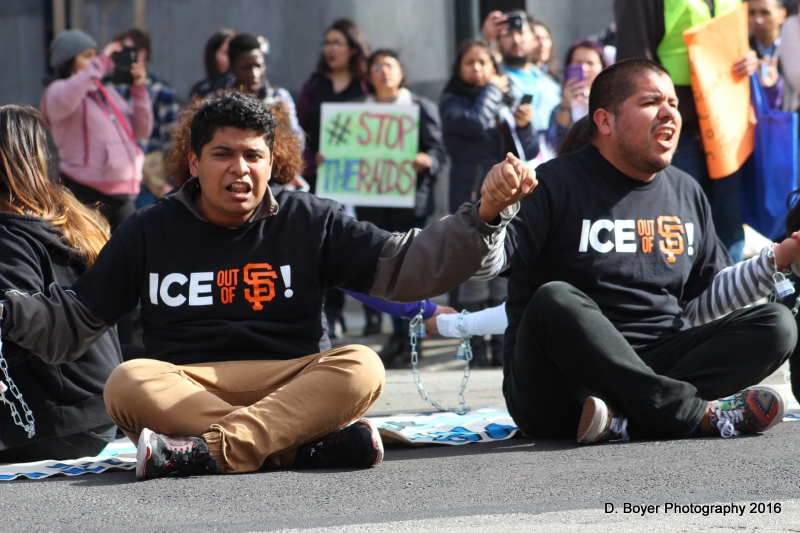 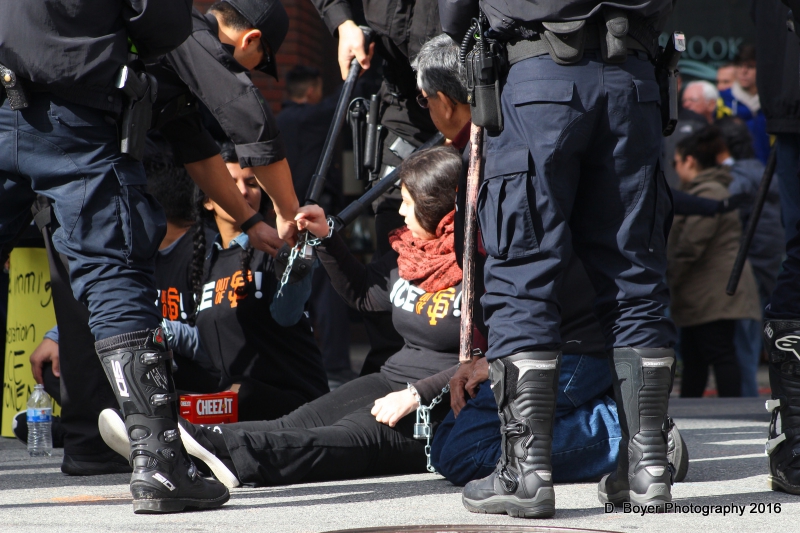 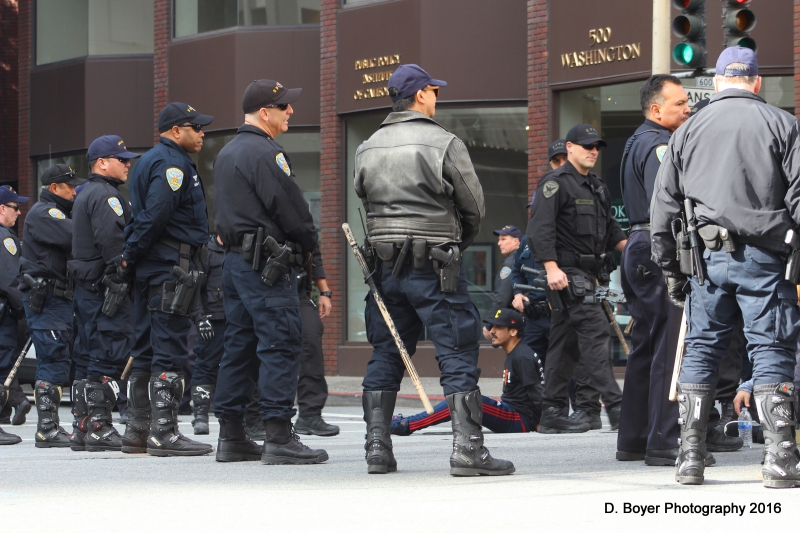 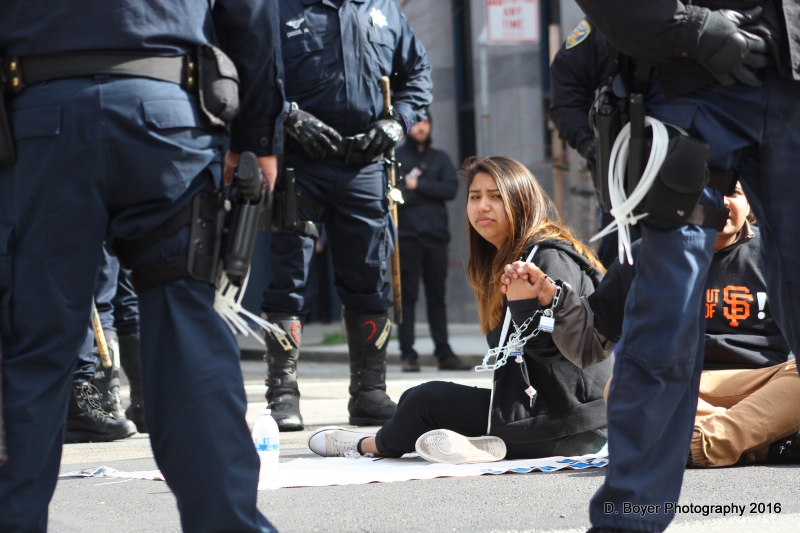 original image (1600x1067)
One of their chants was "Undocumented and Unafraid."
§Bolt cutters had to be used to first free the chained protesters.
by D. Boyer 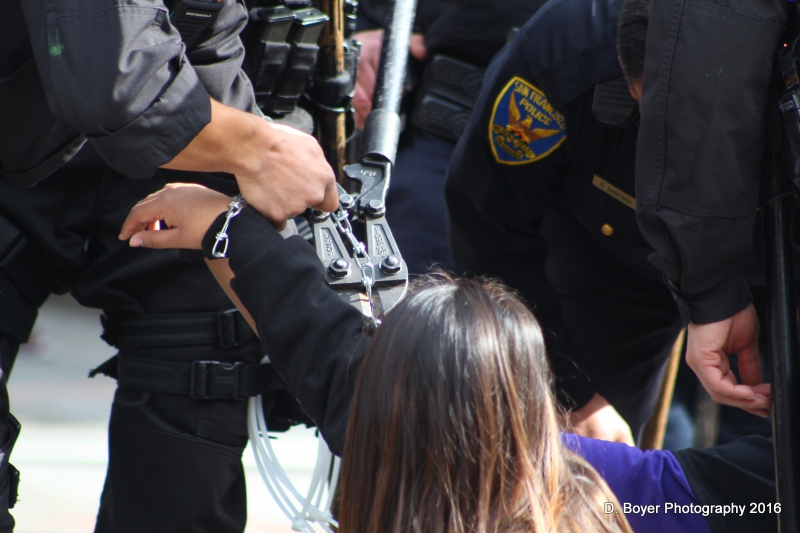 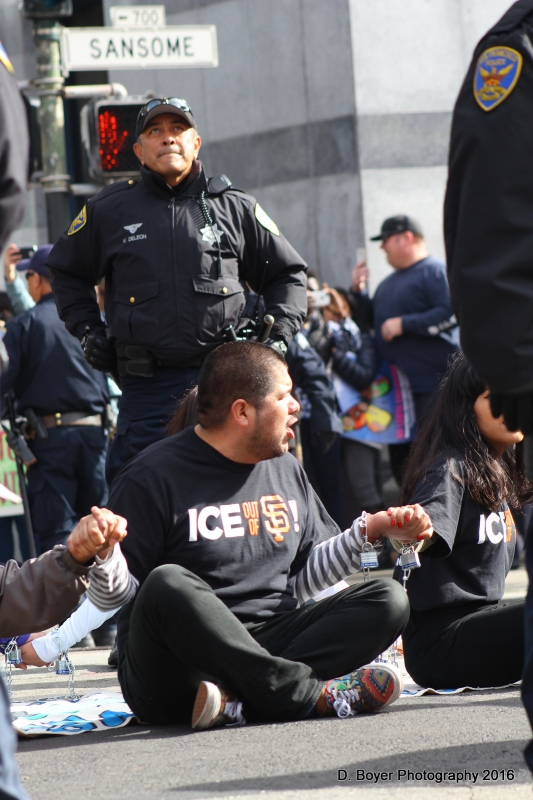 original image (1067x1600)
Add Your Comments
Latest Comments
Listed below are the latest comments about this post.
These comments are submitted anonymously by website visitors.
TITLE
AUTHOR
DATE
Democrat Hennessey & Democrat Obama are anti-immigrant
Register Peace & Freedom or Green
Support Independent Media
We are 100% volunteer and depend on your participation to sustain our efforts!