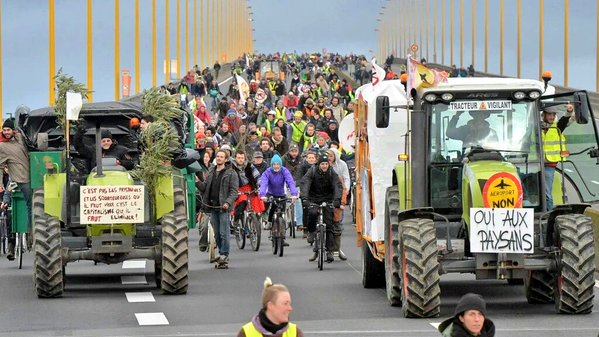 Protesters argue that building a new international airport is a climate crime, adding to and encouraging flight carbon emissions.

But also it turns productive agricultural land into non-productive fields, tarmac and terminals, while also endangering biodiversity and the habitat of 130 protected species. Surveys of the site have identified at least five legally protected species that have not been taken into account by the project records made ​​available to the investigation and related prefectural orders. (See Naturalists Fight: Notre-Dame-des-Landes 5 new protected species question the airport project).

There has been opposition to the airports for many years. A day of action was called for January 9th after the ‘adjourned’ trial of December 10th aimed at evicting the historical inhabitants, with a climate of impending evictions and resuming work early 2016. A hearing has been set for 13/01/2016 to evict historical inhabitants and peasants.

The case is being prosecuted by lawyers for Vinci, a French construction firm, with the contract to build the airport. The court ruling being sought is for expulsion of the residents of 3 farms and 4 houses from expropriated land. They are also seeking punitive damages of 200 Euros per day for each case of non-compliance.

The project goes back as far as 1972, but opposition escalated after 2000 as the project proposal was developed, according to the Zone A Defendre (ZAD) timeline. Read associated stories on Notre Dame des Landes at Nantes Indymedia.

While the main protest occurred near Nantes, there were solidarity protests around the French regions and towns and at Gare Montparnasse in Paris (Storify).

During the afternoon blockade of the Chevire bridge across the Loire, the farmers announced the blockade would continue until Presidente Hollande negotiated. The blockade continued into the night with a camp set up on the bridge with music and toilets. Tensions mounted in the late evening with the arrival of numerous police and CRS (riot police) trucks.

The protest was disbanded following negotiations with the police before midnight. Tear gas and water cannon were used on protestors, after the withdrawal had already been agreed. See Blockade of Le Pont de Chevire (Storify).

A statement from the ZAD website from 27 December 2015 outlines a 6 point alternative future for the land without an airport:

"As there will be no aeroport... We defend this place and intermingle here in our many different ways. We want to take care of the woodlands, its inhabitants, its diversity, its flora and fauna and we plan to stay.

Once the aeroport project is abandoned, we ask;
1- That the inhabitants, proprietors and tenants that were subject to an expropriation or eviction procedure can stay on the zone and reclaim their rights.
2- That the farmers in the struggle affected, having refused to fold when faced by AGO-VINCI, can freely cultivate the land that they currently have use of, reclaim their rights and continue their activities in good conditions.
3- That the new inhabitants who came to occupy the ZAD to take part in the struggle can stay on the zone. That that which has been built since 2007 in the occupation movement in terms of atypical agricultural experimentation, self-built or light homes and accommodation (cabins, caravans, yurts etc), ways of life and struggle, can be maintained and continued.
4- That the land redistributed each year by the chamber of agriculture for AGO-VINCI under the form of indeterminate leases be taken on by an entity from the movement in the struggle which assembles all its elements. That it be therefore the anti-aeroport movement and not the customary institutions that determine the usage of these lands.
5- That these lands go towards new agricultural and non-agricultural institutions, official or alternative and not to extensions.
6- That this basis becomes a reality by our collective determination. And we pay attention together to resolve the possible conflicts linked to their being put into place.

"We are already seeding and building a future without an aeroport with diversity and cohesion. It’s up to us all, from today, to make it flourish and to defend it."

The goal of the six points mentioned above is to put some necessary common bases into place to project the future of the ZAD once the aeroport project is definitively abandoned. They were discussed by a regular assembly which had as its objective to think about the future of the land once the project is abandoned. It is an assembly that brings together people from different parts of the struggle. This is a long-debated text, both in assemblies and in different organisational spaces within the movement."

Farmers announce in the afternoon that they will continue at blockade at the Chevire bridge until President Hollande makes an announcement. The Pont de Chevire is the bridge over the Loire River west of Nantes on the ring road.

But the protest and blockade was opposed by Bruno Retailleau, President of the Regional Council of Pays de la Loire, "Having taken hostage the residents of Notre-Dame-des-Landes, the zadistes now take hostage all the usual motorists who use Cheviré bridge, which is also a major economic center for our region," he said in a statement as reported by Ocean Presse. "I ask the State to take all measures to end this intolerable occupation. Because this time, enough, exasperation is at its peak." he said. "The courts have ruled, Europe too, for the airport."

About 9pm the atmosphere is still festive on the bridge although as the police presence builds so does the tension. Police closed down access to prevent more protesters or journalists joining the gathering of about 500 people. Just after 10pm an evacuation ultimatum was given to organizers by police.

According to Ocean Presse report, brief negotiations between police and demonstrators occurred at about 11:10pm which led to the decision by opponents of Notre-Dame-des-Landes proposed airport, to lift the blockade of the bridge.

But as the blockaders start leaving, the Police from the St. Herblain side start tear gassing the heights of Cheviré bridge at 11:40 p.m and using water cannon.

The blockaders retreat for the night to their headquarters in Notre-Dame-des-Landes at the Laughing Cow, with some 70 tractors stationed on both sides of the southern Cheviré bridge. On both sides of the bridge, the tractors were surrounded by long queues of CRS (riot police) trucks. They had with them lifting gear to move trucks.

Jean-François Guitton, explained on behalf of 300 demonstrators, a few minutes before leaving the Cheviré bridge: "The security forces used excessive means. They were ready to break and move our material. It is a little revenge of the authorities in relation to the mobilization that was very important today and that's still a victory for us. We're going back to Laughing Cow to see in what new form we can challenge President Hollande."

https://storify.com/takvera/thousands-prot...
Add Your Comments
Support Independent Media
We are 100% volunteer and depend on your participation to sustain our efforts!