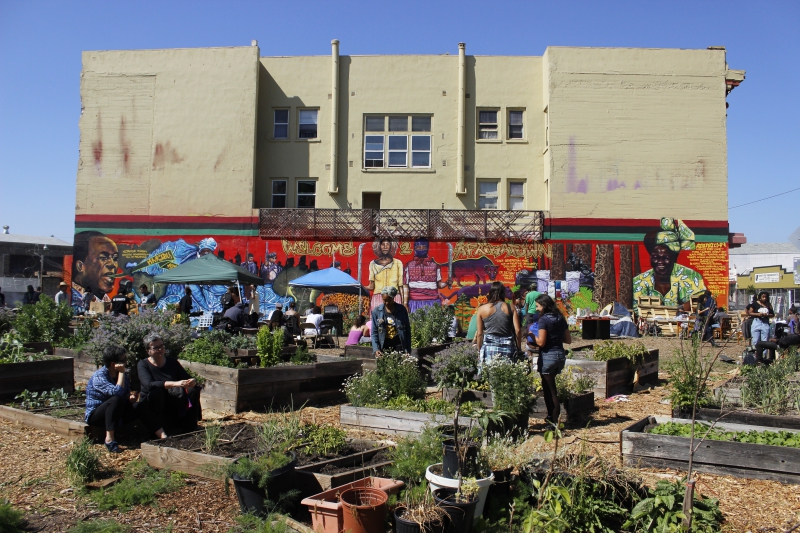 original image (5184x3456)
Over 300 people recently came out to prevent the destruction of “Afrika Town” Community Garden in West Oakland.

The Afrika Town Garden sits on a lot at the intersections of San Pablo, 23rd and Brush streets in West Oakland, just blocks from the “Uptown” district in downtown Oakland.

A year ago, the vacant lot reeked of urine and was littered with trash and syringes. Today, more than the dozen garden beds filled with fruits and vegetables provide fresh food to anyone who asks within an impoverished food desert.

Last fall, volunteers at Qilombo–a social center adjacent to the lot–cleaned up the lot and collaborated with Planting Justice and college students and planted vegetables to feed the community.

On March 7, hundred came to the garden and painted a large “Afrikatown” mural on the side of Qilombo’s building. The mural features Black Panthers, Kwame Nkrumah, and other liberation movement-inspired artwork. The colorful mural not only attracted the approving eye of residents, activists say, but also the attention of developers.

On March 26, the current property owner, Noel Yi, along with his realtor, Gary Robinson, came with Oakland Police, demolition equipment and the intention of destroying the garden. Afrika Town volunteers stood between the bulldozers and the lot’s fence to prevent the uprooting of the garden. After negotiations, the owner agreed to give volunteers one week to dig up the beds before the bulldozers would return.

Instead of removing the fruits and vegetables, lead volunteer Linda Grant and other volunteer organized to defend Afrika Town’s garden.

On April 3, a day billed as ‘Liberation Day,’ the Afrikatown garden lot featured live poetry and musical performances, a “Know Your Rights” workshop by Oakland’s Copwatch, and even a children’s jumper (bounce house). Hundreds attended throughout the day and expressed solidarity with the vision for an Afrika Town in Oakland.

“We want this to be a resource for the community,” said Danae Martinez, a community college professor of African American Studies at Laney and Merritt Colleges. Her students there and throughout the Bay Area helped plant the garden and paint the mural. “We want it to be for Black people and for Black people.” The garden is just a seed for Afrika Town, envisioned as an autonomous zone for Black people.

“A lot of other races and cultures have a designated space, like Chinatown, or Fruitvale, or Hills for the White folks,” said Emani Alyce, a volunteer at Qilombo.
“Afrikatown is a space where Black folks can come and feel comfortable with.” Back in February, organizers painted concrete blocks on the sidewalk the colors of red, black and green, and hoisted “Afrika Town” banners on San Pablo Ave that read, “Karibu, Afrika Town,” Swahili for Welcome! Afrika with a “k” is also a Swahili spelling.

After lobbying from activists and supporters, and a call from Oakland City Councilwoman and Cal alumnus Lynette Gibson McElHaney, Yi and Robinson agreed to work with Afrikatown’s gardeners.

Despite the small victory, Afrika Town’s volunteers are still concerned with gentrification, particularly the West Oakland Specific Plan. Abiola said, “We had a small victory today. It’s nowhere near over.” 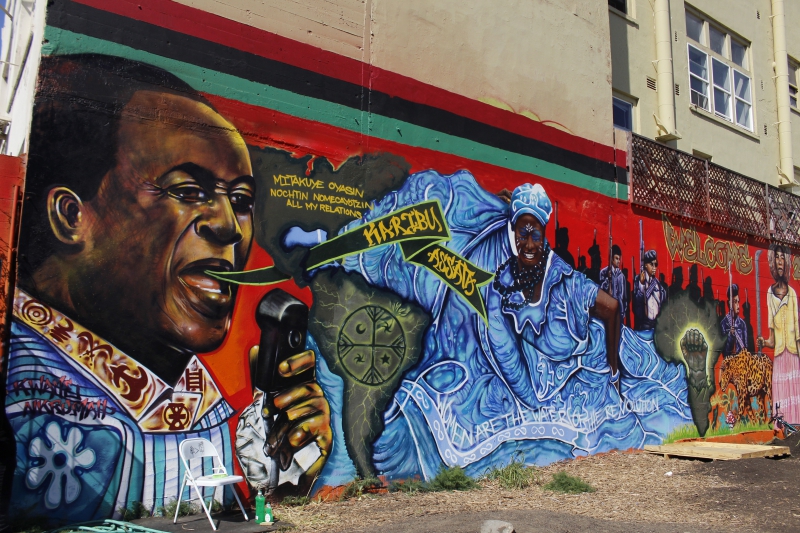 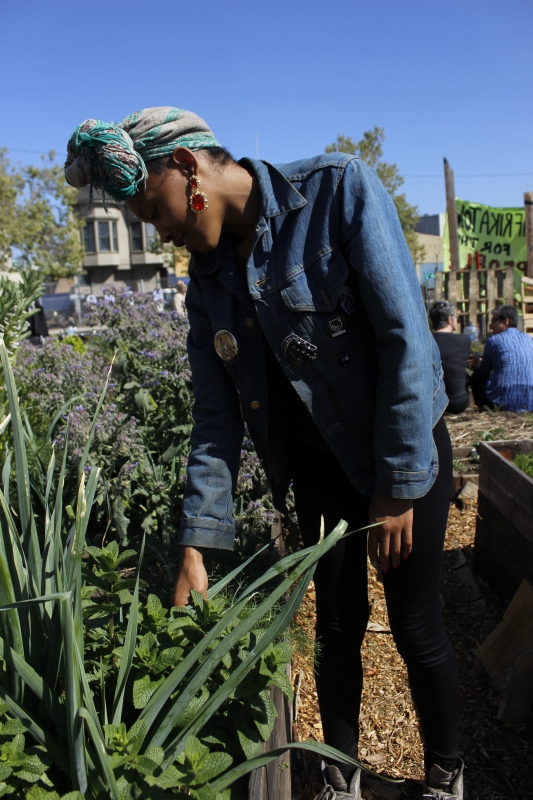 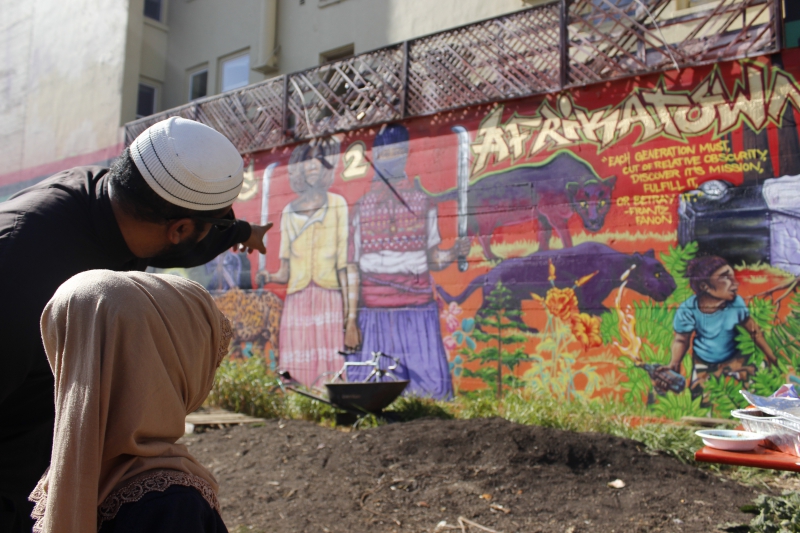 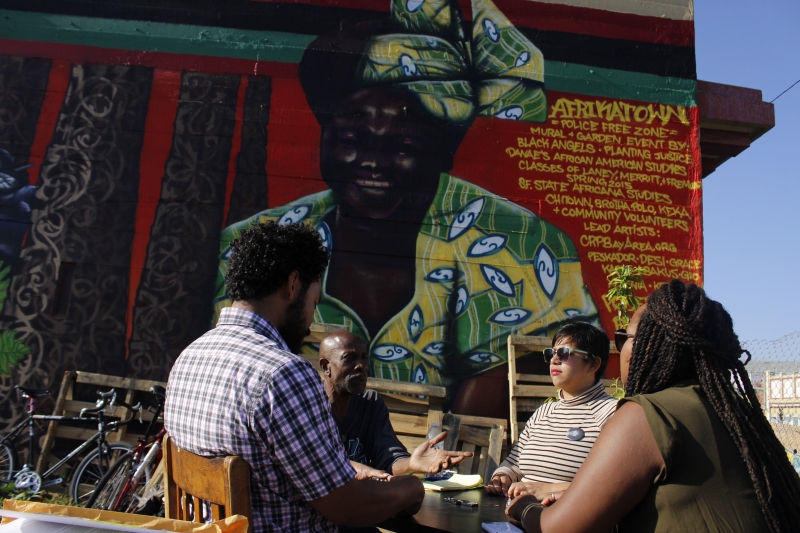 original image (5184x3456)
http://onyxexpress.org/2015/04/05/hundreds...
Add Your Comments
Support Independent Media
We are 100% volunteer and depend on your participation to sustain our efforts!