Add an Event
Newswire
Calendar
Features
Home
Donate
From the Open-Publishing Calendar
From the Open-Publishing Newswire
Indybay Feature
Publish to Newswire
Add an Event
Related Categories: International | Police State & Prisons
Seven Years Against Prison: On the practice of prison noise demos in Ontario
by The Hamilton Institute
Friday Jan 1st, 2016 5:32 PM
For the past seven years, anarchist and other radicals in South-western Ontario have celebrated New Year's Eve with noise demos outside of the areas many prisons. We love to party and celebrate on New Year's and this tradition has allowed us to do so in a spirit of antagonism and solidarity. Here we offer some history and analysis of these actions 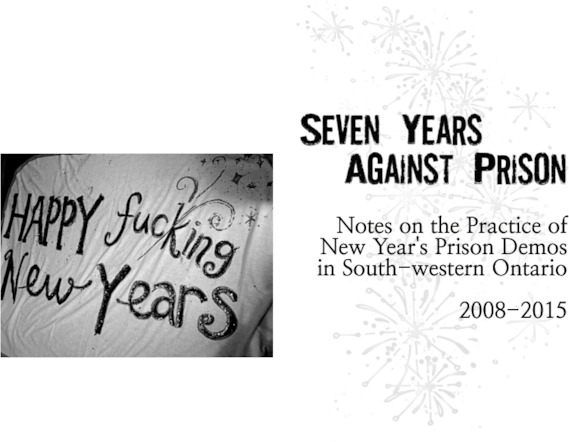 <em>“The prison door opens, and now he knows what to do; keep the memory alive, leave no space for oblivion, never forget the comrades left behind, pick up the thread of insurgency from where it was interrupted, pour the poison of insubordination into the reproduction networks of the capitalist society” </em>

For the past seven years, anarchist and other radicals in South-western Ontario have celebrated New Year's Eve with noise demos outside of the areas many prisons. We love to party and celebrate on New Year's and this tradition has allowed us to do so in a spirit of antagonism and solidarity. We can have fun in a way that actually inspires us and that brings some joy to people who are locked up. Connecting through the walls with prisoners is a direct action against the alienation and separation that prison creates and it transforms the urban space, bringing in to focus the prisons that dot the landscape and making vivid the coercive violence of the state that controls our lives. Prison impacts us every day, whether or not we're locked up, and the New Year's Noise Demos make this conflict tangible.

One of the initial intentions of the noise demos in Hamilton was to participate in an international practice of anarchist solidarity with prisoners. In 2009, it was a direct response to a call to support an international hunger strike campaign by anarchist prisoners, launched by Gabriel Pombo Da Silva from a prison in Germany. The following year, several of our comrades were still locked up from the G20 mobilizations and there had been demos earlier in the year at Vanier/Maplehurst and The Don Jail in support of anarchist and other prisoners held there. This marked a time when, for many of us, the reality of prison intruded more starkly into our lives and the combative anger of the demos that year showed an escalation in hostility still anchored in the spirit of international solidarity, particularly with prisoners in the US state of Georgia who were on hunger strike and with an international call for new year's noise demos (the exact same text has been re-released this year as a fresh call for demos).

This year, let's show our solidarity with the international call for a Black December released by anarchist prisoners in Greece, Nikos Romanos and Panagiotis Argirou. They called for insurrectionary actions around the world which they hope “will be the detonator for the restart of anarchist insurgency, inside and outside the prisons”. Their call has already been answered by more than fifty actions around the world, including in Canada, where an attack on a police vehicle and a confrontational march in Montreal have been claimed as part of Black December. (There is a timeline of actions at rabble.org.uk).

From 2011, the demos expanded – to support prisoners in struggle at the Grand Valley Prison in Kitchener, to visit anarchist prisoners in West Toronto and in Penetanguishene, the Syl Apps youth prison in Oakville – while continuing to anchor themselves with a stop at Hamilton's Barton Jail. This prison, described as 'a monument to human misery', that looms over one of Canada's poorest urban areas, remains very overcrowded and kills several of its prisoners every year.

The shit-eating screws of the OPSEU union use the Barton Jail as a centre-piece in their disputes with the province, allowing conditions there to degenerate to deadly levels to improve their negotiating position. In 2012, a so-called “strike” action by the guards only ended after a prisoner died following a month of lockdown. (But can they really be thought of as workers when their job is to manage the misery of others? Would not such an action more accurately be called hostage-taking or extortion?)

This year, we're stopping at the new Toronto South, or Mimico, prison on the Toronto-Mississauga border. This new maximum security nightmare, which, when full, will be among the largest prisons in Canada, has already seen at least two prisoners die in the year it's been open. Prisoners there describe being locked down three or four days a week and being persistently denied needed medical care. There is no yard in this jail – they meet their requirement for outdoor time by putting prisoners in a concrete room with windows. There are no real visits either – although friends and family still have to travel to the jail, they can only see their loved one by video screen.

The Mimico prison is an escalation of the cruelty and cynicism of the system against us all and it deserves to be vigorously opposed. The intensive management and surveillance of the lives of those locked inside it mirrors the increasing social control we experience outside. The prisoners there have been courageously organizing to demand better conditions, using hunger strikes, press releases, and collective demands, and they definitely deserve our support and participation in a shared struggle.

It's beautiful that we've kept the tradition of New Year's noise demos alive for so many years – as a chance for collective joy, for collective rage, a chance to dramatize the violence of the capitalist system, to remember its many victims, a chance to participate in an international mobilization against prisons and the world that needs them. Happy fucking New Years.

“<i>Prison is not a domain reserved for specialists such as those who have done time themselves or have a particular rapport with individual prisoners, it is the underlying reality of everyday life, each and every discourse of capital taken to its logical conclusion.”</i>

https://thehamiltoninstitute.noblogs.org/p...
Add Your Comments
Support Independent Media
We are 100% volunteer and depend on your participation to sustain our efforts!