by via Center for Food Safety
CHEYENNE, WY (December 29, 2015) – A federal judge noted “serious concerns and questions” about the constitutionality of Wyoming’s controversial “data trespass” laws in response to a suit from a diverse coalition of conservation, press, academic and animal-protection groups. The suit claims that in violation of Americans’ constitutional rights, the laws punish communication to government agencies of photos and data taken on open land, criminalizing otherwise lawful advocacy in an attempt to undercut protection of public lands and the environment.
In response to the State of Wyoming’s motion to dismiss the case, Judge Scott Skavdahl issued a 38-page order in which he refused to strike the plaintiffs’ First and Fourteenth Amendment claims against the state laws, confirmed that the groups had standing to challenge the laws in court and ordered the removal of Governor Matt Meade as a defendant in the case. In evaluating the suit’s First Amendment claims, the Court noted “serious concerns and questions as to the Constitutionality of various provisions of these trespass statutes...” and wrote that the state’s arguments in favor of the law “appears to simply be a façade for content or viewpoint discrimination.”

Following are quotes from plaintiffs in the litigation:

"Laws like this one in Wyoming seriously jeopardize public and environmental health by shielding public lands from scrutiny. To stop food borne illness outbreaks we need to increase transparency, not make it illegal for the pubic to share information about the environmental or food safety problems they observe," said Cristina Stella, attorney at Center for Food Safety.

"The NPPA is very pleased with the commonsense order by the judge upholding press freedoms at this point in the litigation,” said Mickey Osterreicher, General Counsel for the National Press Photographers Association.

“The legal challenge withstood its first test in court, and I believe that the judge demonstrated a clear understanding of what is at stake if these laws are allowed to stand: selective enforcement, penalties for certain types of speech, and unequal protection for American citizens who seek to protect natural resources,” said Travis Bruner, Executive Director of Western Watersheds Project.

"The Court's order dispels the myth that Wyoming has attempted to create that its laws intend to protect private property rather silence the voices of those concerned about the environment and animal welfare. I am optimistic that when the Court reaches its ultimate conclusion, it will understand that such censorship is entirely inconsistent with the First Amendment,” said Justin Pidot, law professor at the University of Denver, who is acting as counsel for Western Watersheds Project and National Press Photographers Association.

“This victory reinforces recent Ag-Gag wins in Idaho and Utah and tends to confirm that media activities like recording are protected by the First Amendment,” said Justin Marceau, representing the Animal Legal Defense Fund.

"Americans have a First Amendment right to expose illegal activities and cruelty to animals, such as was done in PETA's exposé of the wool industry, in which workers were seen beating, kicking, and killing sheep in Wyoming," says general counsel to PETA Jeff Kerr. "Free speech has prevailed against 'ag-gag' laws in 20 states so far, and PETA looks forward to seeing Wyoming's law fall, too." 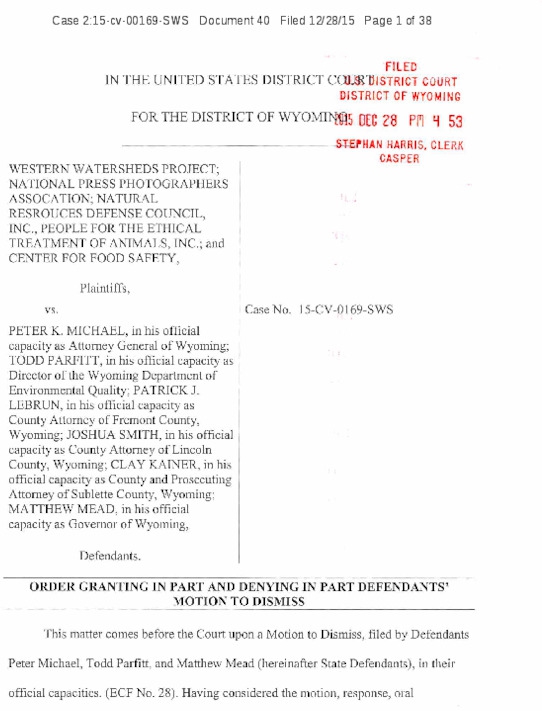 Download PDF (2.5MB)
Add Your Comments
Support Independent Media
We are 100% volunteer and depend on your participation to sustain our efforts!