Add an Event
Newswire
Calendar
Features
Home
Donate
From the Open-Publishing Calendar
From the Open-Publishing Newswire
Indybay Feature
Publish to Newswire
Add an Event
Related Categories: Americas | California | Central Valley | International | U.S. | Environment & Forest Defense | Government & Elections | Racial Justice
Indigenous Leaders Slam Jerry Brown, UN for Backing Potentially Genocidal Carbon Trading
by Dan Bacher
Thursday Dec 10th, 2015 5:30 PM
"REDD is a carbon offset mechanism which privatizes the air that we breathe and uses forests, agriculture and water ecosystems in the Global South as sponges for industrialized countries pollution, instead of cutting emissions at source," said Tom Goldtooth, Executive Director of the Indigenous Environmental Network. "REDD brings trees, soil, and nature into a commodity trading system that may result in the largest land grab in history. It steals your future, lets polluters off the hook and is a new form of colonialism. NO to Privatization of Nature!”

Photo: Indigenous leaders challenged Brown's support of pollution trading and fracking after he spoke in Paris on December 8. Photo courtesy of Rae Breaux. 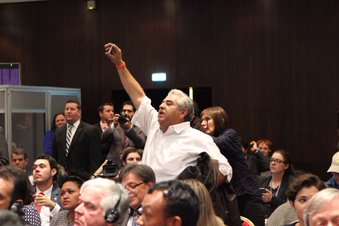 At the end of his keynote address at the World Climate Summit in Paris on Tuesday, December 8, Indigenous leaders heckled Governor Jerry Brown, challenging him on his support of controversial carbon trading polices that represent “a new form of colonialism” that could potentially cause genocide.

Brown had just finished his remarks when Penny Opal Plant of Idle No More stood up and shouted, “Richmond, California says no to REDD and no to evacuating indigenous people from their forests. NO REDD!” Indigenous leaders and environmental activists in the room around her joined her in yelling, "NO REDD!"

According to the Sacramento Bee, “California officials have considered ways to link the state’s cap-and-trade program, in which polluters pay to offset carbon emissions, to tropical rainforests in Chiapas, Mexico and Acre, Brazil.”

On his fourth day at the conference, Brown spoke at events highlighting what the Governor’s Office called “bold action to accelerate zero emission vehicles, reduce short-lived climate pollutants and build partnerships with other states, cities and regions to cut dangerous carbon pollution.”

"We are really a crucial element in making the fundamental change from a carbon intensive economy to one that is on the side of nature, and therefore sustainable," said Governor Brown. "Individual jurisdictions – cities, states, provinces and regions – can be a coalition of the willing."

Indigenous leaders from throughout the world disagreed that the Governor’s strong support of carbon trading and fracking represents a “fundamental change” that is “on the side of nature.”

A facebook post from the Winnemem Wintu Tribe commented, "Jerry 'Frack King' Brown" felt some heat in Paris today, where he has been continuing his charade as a 'green' leader, while opening the state to fracking and toxic fracking water dumping."

Caleen Sisk, the Chief and Spiritual Leader of the Tribe, is currently in Paris participating in the events, protests and meetings at the Climate Summit.

On the same day that Brown was heckled, civil society, environmentalists and Indigenous Peoples joined together at the foot of a miniature Eiffel Tower to reject REDD.

A joint news release from the Indigenous Environmental Network and Friends of the Earth International described REDD as a “carbon market mechanism, land-grabbing false solution to climate change that could potentially cause genocide.” (http://www.ienearth.org/un-promoting-potentially-genocidal-policy-at-world-climate-summit)

“Instead of cutting CO2 and greenhouse gas emissions, the UN, the US, the EU, China, Norway and climate criminals like BP, Total, Shell, Chevron, Air France and BHP Billiton are pushing a false solution to climate change called REDD (Reducing Emissions from Deforestation and Degradation)," according to Tom Goldtooth, Executive Director of the Indigenous Environmental Network.

"REDD is a carbon offset mechanism which privatizes the air that we breathe and uses forests, agriculture and water ecosystems in the Global South as sponges for industrialized countries pollution, instead of cutting emissions at source," said Goldtooth. "REDD brings trees, soil, and nature into a commodity trading system that may result in the largest land grab in history. It steals your future, lets polluters off the hook and is a new form of colonialism. NO to Privatization of Nature!”

The REDD program is just one of the many anti-environmental policies of the self-styled "climate leader" that range from support of the environmentally destructive Delta Tunnels that would divert massive quantities from the Sacramento River, to promoting the expansion of fracking in California, to pushing water policies that have driven winter-run Chinook salmon, Central Valley steelhead, Delta and longfin smelt, green sturgeon and other fish species to the brink of extinction.

REDD is new phase of colonization

The No REDD in Africa Network describes REDD and all its variants as “unjust mechanisms designed to usher in a new phase of colonization of the African continent.”

“The REDD mechanism is a scam and the polluters know that they are buying the ‘right’ to pollute. Coming at a time when climate action has shifted away from legally binding requirements to voluntary, ‘intended nationally determined contributions,’ REDD provides a perfect space for polluters to keep polluting while claiming they are champions of climate action,” according to the Network.

“The worst form of slavery is to willingly offer yourself on the auction block, get bought and pretend you are free. This is what participation in the mechanism called REDD is,” said Nnimmo Bassey, co-director of the No REDD in Africa Network and recent winner of the Right Livelihood Award (the alternative Nobel Peace prize).

In 2013 the Government of Kenya was getting “ready” for REDD in the Embobut Forest — and now it is violently evicting the Sengwer People and forcing them “into extinction," said Bassey.

According to Survival International, “as many as a thousand homes have already been torched.” The UK Guardian has characterized the eviction against the Sengwer People as “scorched earth tactics.”

The Network said the Kenya Forest Service and Administration Police, a paramilitary unit of the police, has evicted some of the Sengwer, touting AK-47s, not just from the Embobut Forest but from the entirety of the Cherangany Hills, destroying property and burning homes. “The government of Kenya is forcing us into extinction,” a Sengwer spokesman has said.

“Since most of the world’s forests are in Indigenous Peoples’ territories, human rights activists are particularly concerned about the potential of REDD to cause genocide,” the Network noted.

Casey Camp–Horinek of the Ponca Nations said, “Yesterday’s genocide was done with guns and blankets with small pox. Now they are using carbon trading and REDD.”

Isaac Rojas, Friends of the Earth International Forest and Biodiversity Program Coordinator, said REDD is also a "disaster" for the environment. “Forests are not simply groups of trees and inert materials that can be reduced to ‘carbon stocks,’ commodities that can be traded on stock exchanges and markets,” he explained.

"REDD could also create adverse incentives for deforestation. As REDD offset credits are only supposed to be generated when deforestation or forest degradation has been avoided, governments and corporations are supposed to demonstrate that, at a given time, they were planning to log or clear certain areas of forest. It is thus in their interest to be able to maintain high levels of planned deforestation," the release concluded.

As Jerry Brown continues to promote REDD and the expansion of fracking in California, along with hiring Big Oil-friendly officials to “regulate” the state’s oil and gas industry, reporters and editors from the mainstream media generally provide fawning covering of the Governor’s trips to climate conferences across the globe to greenwash his tainted environmental legacy.

In addition to his support of REDD and fracking, Jerry Brown has overseen a plethora of anti-environmental policies and projects that rip away the Governor’s “green” façade, including the following:

• He promotes the environmentally destructive Delta Tunnels, a project that would lead to the demise of the Sacramento-San Joaquin River Delta, the largest estuary on the West Coast of the Americas.

• In collaboration with the Obama administration, Brown has presided over the draining of Trinity, Shasta, Oroville and Folsom reservoirs during a record drought to supply water to corporate agribusiness interests.

• He presided over record water exports out of the Sacramento San Joaquin River Delta and a record Sacramento splittail kill in 2011.

• Brown “completed” the faux “marine protected areas” developed under the helm of a Big Oil lobbyist under the privately funded Marine Life Protection Act (MLPA) Initiative. These “marine protected areas, based on terminally flawed “science” and the violation of Tribal gathering rights, fail to protect the ocean from fracking, offshore oil drilling, pollution, oil spills, military testing, corporate aquaculture and all human impacts on the ocean other than sustainable fishing and gathering.

For more information on the toxic environmental legacy of "Big Oil Brown," go to: http://www.truth-out.org/speakout/item/30452-the-extinction-governor-rips-the-green-mask-off-his-tunnels-plan

You can also read my online debate with Tom Hayden over whether Jerry Brown is a "climate hero" or "greenwashing villain" at: http://sandiegofreepress.org/2014/06/tom-hayden-greenwashes-governor-browns-abysmal-environmental-record/14

For more information on Big Oil lobbying money in California, go to: http://redgreenandblue.org/2015/11/10/big-oil-lobbying-money-turns-california-the-wrong-kind-of-green/
Add Your Comments
Support Independent Media
We are 100% volunteer and depend on your participation to sustain our efforts!