Add an Event
Newswire
Calendar
Features
Home
Donate
From the Open-Publishing Calendar
From the Open-Publishing Newswire
Indybay Feature
Publish to Newswire
Add an Event
Related Categories: International | Environment & Forest Defense | Police State & Prisons
Nantes, France: brutal and deliberate attack on freedom protest
by Winter Oak
Monday Dec 7th, 2015 11:36 AM
A protest “against the state of emergency and COP21” was organised for the evening of Friday December 4 in Nantes, France. The main aim was to keep a presence on the streets after the banning of the Paris demo and to protest against the house arrests of activists and the authorities’ raids which are openly targeted people of the Muslim faith. The gathering was also intended to give people the chance to exchange views and break the sense of isolation and fear. 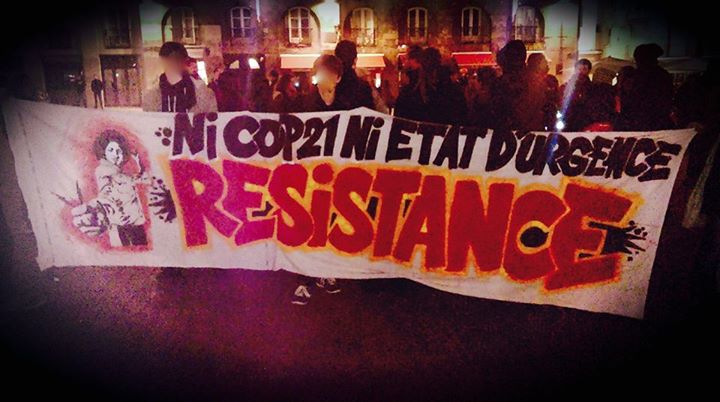 Shortly after 6pm, the little gathering took shape and a banned was unfurled reading “Neither COP21 nor state of emergency – resistance!”. A few people spoke to make the point about the current high-security climate. The police weren’t visible and the atmosphere was calm.

Around 6.45pm, the little march of around 150 people set off amidst a few smoke bombs. There were people of all ages in the demo. For some, it was their first protest. People weren’t masked up, the mood was definitely not one of attack or conflict. People chorused the slogan: “State of emergency, police state, they won’t take away our right to demonstrate”.

After barely 100 metres, the march came across a car and motorbikes from the local police. There was a confused exchange. The local cops very quickly started using a massive amount of tear gas cylinders and batons on some of the protesters.

The scenes which followed were gobsmacking. It was a real unleashing of police violence. All of it happened in less than five minutes.

A brigade of the BAC (“Anti-Criminal Brigade” – national police usually in plain clothes) surged into the heart of the protest, batons first. These non-uniformed police had been hiding at the back of the group from the start. One protester was pushed to the ground and beaten, while a 50-year-old woman shouting “No violence!” was also thrown to the ground by the police and hurled against the window of Galeries Lafayette (a shop). She was hit several times.

The arrested protester was thoroughly beaten while on the ground. He was thrown into the local police’s car, his face burnt by tear gas and twisted in pain.

The cops continued to empty their tear gas into the air to saturate the road with irritant spray, even when protesters were ten metres or more away from them. The air was unbreatheable.

Police vans turned up straight away. The top chief of police – the Departmental Director of Public Security – was there with his men. The attack was therefore premeditated. He stood back and let it happen. Incredible. Police in riot gear, with shields, rushing at full speed, yelling, in total confusion, hitting anyone, male or female, who came within reach. A couple of passers-by were batoned, customers sitting outside a cafe were frightened.

“Seeing as he was still coming towards me, hitting out at me, I let go off the banner and turned my back on him. At this point he smashed me on the head with his baton. I fell down. He hit me again several times while I was lying there. Other people quickly came over and I was able to get up – I then realised I was bleeding heavily.”

This protester was taken to hospital with an extensive head wound.

Shocked passers-by intervened. A man in a suit, coming out the Decré shop, stood in the way of a policeman relentlessly beating a young woman on the ground.

Everything happened very quickly. At the same moment, a local police vehicle drove at speed into a group of protesters, who managed to scatter at the last minute, only just avoiding being run over. As it set off, the car had already driven over somebody handcuffed and lying on the ground. The injured person was taken to hospital, unconscious.

The demonstration broke into several small groups. Some went back to the Place du Bouffay before dispersing. The toll: at least two in hospital, dozens gassed and two or three arrested. The absence of any media probably allowed this to happen.

The march can only have lasted ten minutes, and covered a hundred metres or so, before it was subjected to an unleashing of totally incredible unexpected violence. Nobody had foreseen the possibility of this sort of police aggression.

The police deployed, commanded directly on the ground by the Nantes chief of police, clearly set out with the aim of crushing the slightest sign of resistance to the state of emergency in the city.

Let’s turn out in force on Saturday December 12 at the Place du Bouffay, Nantes, at 3pm, against COP21, the state of emergency and police violence! 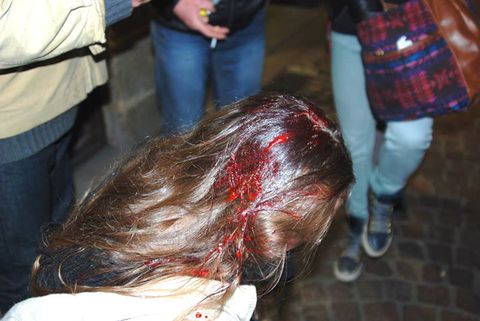 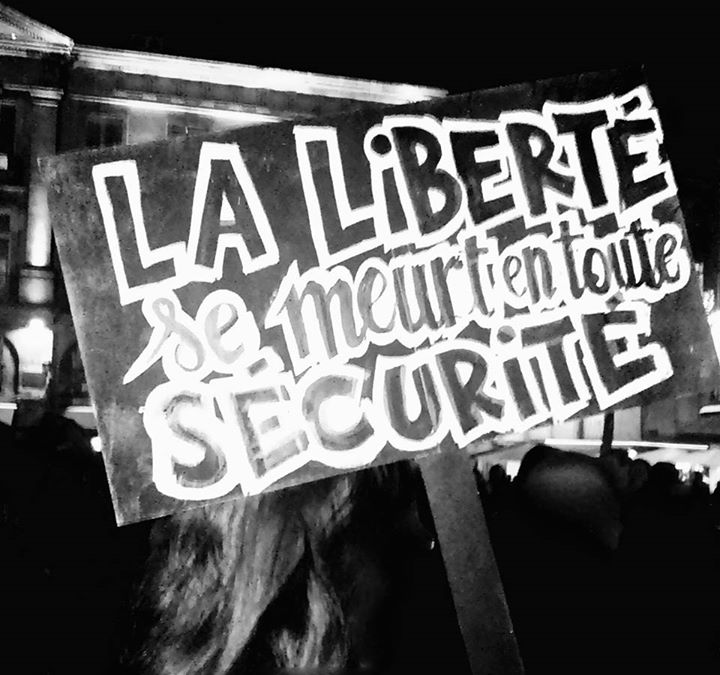 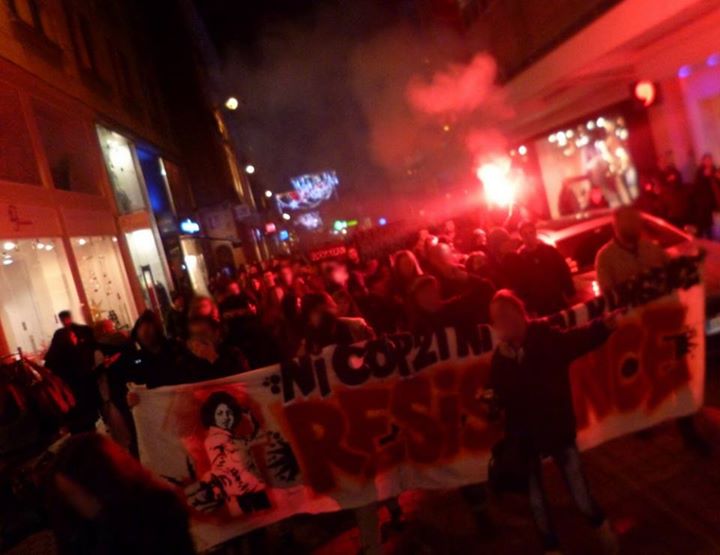