by Dan Bacher
"Genetically engineered salmon pose a serious potential threat to wild salmon stocks that our members rely on to make a living or fish for food and sport," the group said in a statement. "In addition, GE salmon also pose a threat to salmon protected by the federal Endangered Species Act."

Photo courtesy of the Center for Food Safety. 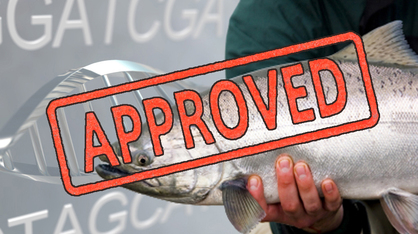 The federal Food and Drug Administration (FDA) on November 19 approved genetically engineered salmon, called "Frankenfish" by critics, as “safe” for human consumption in spite of massive public opposition to the decision.

The Golden Gate Salmon Association (GGSA) announced it was “disappointed” in the decision, joining a broad coalition of fishing groups, environmental organizations, Tribes and consumer groups in criticizing the approval of the first-ever genetically engineered animal for the dinner table.

The FDA approved the controversial AquaBounty Technologies’ application for AquAdvantage Salmon, an Atlantic salmon that reaches market size faster than non-GE farm-raised Atlantic salmon, claiming it is safe to eat, safe for the environment and safe for the fish itself, despite a large amount of evidence provided by GMO opponents challenging this contention.

The company added a growth hormone-regulating gene from a Pacific Chinook salmon and a promoter from an ocean eel pout to the Atlantic salmon’s 40,000 genes, allowing the fish to grow year-round instead of only during spring and summer.

The FDA regulates GE animals under the new "animal drug" provisions of the Federal Food, Drug, and Cosmetic Act because the recombinant DNA (rDNA) construct introduced into the animal meets the definition of a "drug," according to the FDA. (http://www.fda.gov/NewsEvents/Newsroom/PressAnnouncements/ucm473249.htm)

“The FDA has thoroughly analyzed and evaluated the data and information submitted by AquaBounty Technologies regarding AquAdvantage Salmon and determined that they have met the regulatory requirements for approval, including that food from the fish is safe to eat,” said Bernadette Dunham, D.V.M., Ph.D., director of the FDA’s Center for Veterinary Medicine.

Since the FDA claims there is no biological difference between the "Frankenfish" and non-GMO salmon, Aquabounty is not required to label the genetically engineered fish.

The GGSA (goldengatesalmon.org), a coalition including commercial and recreational salmon fishermen, businesses, restaurants, an Indian Tribe, environmentalists, elected officials, families and communities that rely on salmon, disagreed with the FDA's claims that the "Frankenfish" is safe for people, the environment and the fish itself.

"Genetically engineered salmon pose a serious potential threat to wild salmon stocks that our members rely on to make a living or fish for food and sport," the group said in a statement. "In addition, GE salmon also pose a threat to salmon protected by the federal Endangered Species Act."

The creator of the GE salmon, Aquabounty, claims the fish will be "sterile" and kept in closed tanks, but GGSA said reports suggest that as many as five percent would be fertile and able to reproduce or possibly hybridize with wild fish if they escaped into the wild,

“No one knows if genetically engineered fish would spell the end for wild stocks if they escaped and hybridize but it’s not something any of us wants to find out,” said GGSA executive director John McManus. “History clearly shows that to date, farmed salmon have escaped every form of capture where they’ve been confined.”

On the same day, the Center for Food Safety announced plans to sue the FDA to block the agency’s approval for sale and consumption of the genetically engineered AquaAdvantage® salmon. The suit will be filed in coordination with other colleague plaintiffs. (http://www.centerforfoodsafety.org/press-releases/4131/fda-approves-first-genetically-engineered-animal-for-human-consumption-over-the-objections-of-millions )

“The fallout from this decision will have enormous impact on the environment. Center for Food Safety has no choice but to file suit to stop the introduction of this dangerous contaminant,” said Andrew Kimbrell, executive director of Center for Food Safety. “FDA has neglected its responsibility to protect the public.”

"In approving the AquaBounty transgenic salmon, the FDA ignored millions of Americans and more than 40 members of Congress who have expressed vocal opposition. FDA also neglected the concerns of more than 300 environmental, consumer, health and animal welfare organizations, salmon and fishing groups and associations, food companies, chefs and restaurants," he said.

Approximately 2 million people filed public comments with the FDA in opposition to this action, the largest number of comments the FDA has ever received on an action, according to the Center.

“The review process by FDA was inadequate, failed to fully examine the likely impacts of the salmon’s introduction, and lacked a comprehensive analysis. This decision sets a dangerous precedent, lowering the standards of safety in this country. CFS will hold FDA to their obligations to the American people,” said Kimbrell.

Wenonah Hauter, Executive Director of Food & Water Watch, responded to the decision by stating, "This unfortunate, historic decision disregards the vast majority of consumers, many independent scientists, numerous members of Congress and salmon growers around the world, who have voiced strong opposition." (http://www.indybay.org/newsitems/2015/11/19/18780167.php)

“FDA’s decision also disregards AquaBounty’s disastrous environmental record, which greatly raises the stakes for an environmentally damaging escape of GMO salmon. In recent years, AquaBounty facilities outside the United States have dealt with an accidental disease outbreak, an accident that lead to ‘lost’ salmon, and a $9,500 fine from Panamanian regulators who found the company in breach of that country’s environmental laws," Hauter said.

In an action alert to members, Food and Water Watch also said, "Needless to say, we're disappointed, but not surprised. The fact that the FDA made this call - despite the outcry from hundreds of thousands of concerned citizens like you - speaks to the immense pressure that the biotech industry put on them."

The group said the targets in their campaign to stop Frankenfish from reaching the nation’s dinner tables are President Obama and Congress, who have the power to revoke the GMO salmon's approval.

To sign a petition asking President Obama and your members of Congress to revoke the approval of GMO salmon, go to:https://secure.foodandwaterwatch.org/site/Advocacy;jsessionid=2AF8EC76CF6ED95F2846D0BD880DE192.app324a?pagename=homepage&page=UserAction&id=2423&autologin=true

Caleen Sisk, Chief and Spiritual Leader of the Winnemem Wintu Tribe, sees the approval of genetically engineered salmon as a big threat to their culture and traditions.

"Salmon is in our traditional stories, songs and dances," said Sisk. "We must stay pure to exist in the ancient circle connecting our tribal customs to salmon. The Winnemem Wintu have a right to protect salmon, and certainly NOT allow them to be genetically modified in anyway. They must not have their genes and DNA subject to exploring ideas.

"It must be recognized as an inherent right of Indigenous Peoples for the Winnemem Wintu to hold the salmon as a relative that is so intrinsic to our culture. There are complete ecosystems based on the clarity, knowledge and health of the salmon," said Sisk. (https://intercontinentalcry.org/winnemem-wintu-chief-says-frankenfish-must-be-stopped)

For example Michael Taylor, the FDA's Deputy Commissioner for Foods and Veterinary Medicine, is a former Monsanto lobbyist who served as the Vice President for Public Policy at the Monsanto Corporation from 1998 until 2001. (http://www.organicconsumers.org/news/michael-taylor-monsantos-man-obama-administration)

The FDA's approval of Frankenfish couldn't come at a worse time for Central Valley and Klamath/Trinity River salmon. Both the Obama and Brown administrations are fast-tracking the California Water Fix to build two massive, salmon-killing Delta Tunnels, considered by many to be the most environmentally destructive public works project in California history.

As if that wasn't enough, over the last three years of drought the Bureau of Reclamation and California Department of Water Resources systematically drained Folsom Lake on the American River, Lake Oroville on the Feather River, Lake Shasta on the Sacramento River and Trinity River on the Trinity River to export water to corporate agribusiness interests on the west side of the San Joaquin Valley, Southern California water agencies and oil companies conducting fracking and other extreme oil extraction methods in Kern County.

Because of the Obama and Brown administrations' mismanagement of the Central Valley and Trinity River reservoirs and the Delta during the drought, Sacramento winter-run Chinook salmon, Delta and longfin smelt, green sturgeon and other imperiled fish species are getting closer and closer to the dark abyss of extinction.

If preliminary figures released by the National Marine Fisheries Service in late October are confirmed, this would be the second year in a row that nearly all of the juvenile winter-run Chinook salmon perished in lethally warm water conditions on the Sacramento River, due to the over-appropriation of water to agribusiness.(http://www.sacbee.com/news/state/california/water-and-drought/article41684160.html)

Other fish species have also declined dramatically, due to massive water exports from the Delta and mismanagement of the reservoirs. The fall midwater trawls surveys conducted annually by the California Department of Fish and Wildlife show that population indices of Delta smelt, striped bass, longfin smelt, threadfin shad, American shad and Sacramento splittail have declined 97.80%, 99.70%, 99.98%, 97.80%, 91.90%, and 98.50%, respectively, between 1967 and 2014, according to Bill Jennings, Executive Director of the California Sportfishing Protection Alliance (CSPA).