by Bob English
Today we remember and honor Swedish-American labor organizer, poet and songwriter Joe Hill who was executed 100 years ago Nov 19, 1915. Traveling widely and organizing workers under the Industrial Workers of the World (IWW), he was popular and visible as a speaker, writer of political and union songs - the first written for the American working class - which he performed at strikes and rallies. Those songs helped galvanize the union movement and IWW, whose activism triggered violent opposition from the wealthy class, the ‘1 percent.’ This year his life, last hours and legacy to the labor movement and folk music are narrated in a performance and album of his songs, "Joe Hill’s Last Will" by singer/songwriter John McCutcheon. 100 years later Joe Hill is one of, if not the most renowned, beloved and inspiring labor leaders of the 20th century. He inspired Woody Guthrie, a primary influence for modern singer/songwriters. The IWW principle/vision of One Big Industrial Union for all workers is central to understanding current issues, dynamics and effectiveness of labor organizing. 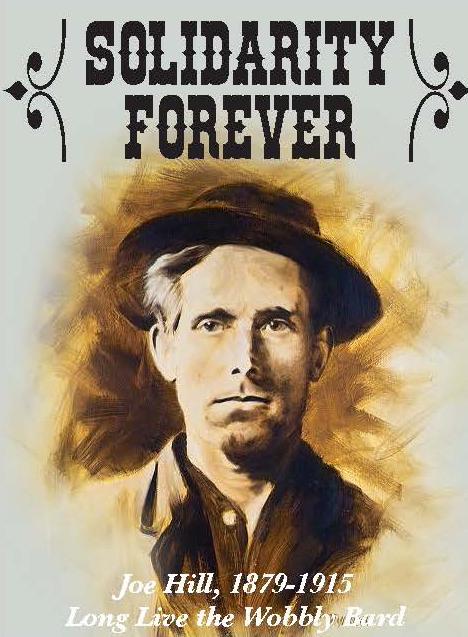 
I dreamed I saw Joe Hill last night,
Alive as you or me …

Swedish-American labor organizer, poet and songwriter Joe Hill was executed 100 years ago on Nov 19, 1915. Born Joel Emmanuel Hagglund, Oct 7, 1879, he emigrated to the US in 1902. Working on the West Coast as a migrant laborer in 1910, he joined the Industrial Workers of the World (IWW), the “Wobblies,” a radical union of immigrants (subjected to the anti-immigrant hysteria of that period), founded on the principle of One Big Industrial Union for all workers http://www.iww.org/history.

Traveling widely and organizing workers under the IWW, Joe Hill was wildly popular and visible as a speaker, writer of satirical poems, political and union songs (based on tunes of the times), which he performed at IWW strikes and rallies.

Would you have freedom from Wage slavery…
Would you from mis’ry and hunger be free...

Come, all ye workers, from every land,
Come, join in the grand industrial band.
Then we our share of this earth shall demand...

This year Joe Hill’s life, last hours and legacy to the labor movement and folk music are honored and narrated in a performance and album of his songs, Joe Hill’s Last Will by singer/songwriter John McCutcheon https://www.folkmusic.com/store/recordings/joe-hills-last-will; http://www.thefreight.org/joe-hills-last-will . The stage play, written by Si Kahn, was first performed in Sebastopol, California 2011.

“Hill channeled his experiences into songs, the first written for the American working class. Those songs helped galvanize the union movement, specifically the IWW, whose activism triggered violent opposition from the wealthy class we now refer to as the ‘1 percent’” (from the show announcement).

As such, he was targeted by the 1% and capitalists, particularly the “copper bosses” of Silver King mine, Park City Utah where he was arrested for murder in 1914, framed and convicted. The unjust trial and capital punishment sentence were challenged by a prominent clemency campaign and generated international media attention, union and public protest. In the stage narration of his last hours in jail before his execution at dawn, Hill thought few would remember his life and work.

(Written in his cell, on the eve of his execution)

My will is easy to decide,
For there is nothing to divide.
My kind don’t need to fuss and moan —
“Moss does not cling to a rolling stone.”

My body? Ah, if I could choose,
I would to ashes it reduce,
And let the merry breezes blow
My dust to where some flowers grow.

Perhaps some fading flower then
Would come to life and bloom again.
This is my last and final will.
Good luck to all of you.

In October 1960 in Sydney, Australia, the great Paul Robeson performed a powerful rendition of “Joe Hill” to construction workers at the site of the future Sydney Opera House.

And standing there as big as life
And smiling with his eyes
Says Joe, “What they forgot to kill
Went on to organize.

From San Diego up to Maine,
In every mine and mill –
Where working people [men] defend their rights
It’s there you’ll find Joe Hill.

Through his progressive songwriting a century ago, Joe Hill articulated and transmitted still current issues of immigrant and workers rights, economic and class inequality, feminism, religion and war. “Casey Jones–The Union Scab,” “The Preacher and the Slave,” “The Tramp,” “The Rebel Girl” and “There is Power in a Union” are folk and union standards.

Currently, there are struggles throughout the labor movement (e.g. National Union of Healthcare Workers defection from SEIU/United Healthcare Workers) for more democratic, “member driven,” inclusive unions, fighting for the interests and benefits of all workers, ready to take on (not accommodate, deal or collaborate with) management, the corporate-governmental complex, political machines and power structures.

These differences and conflicts between industrial and craft or business unions, their effects in terms of representing, including or excluding workers, are analyzed in an upcoming, related article, reviewing recent history and politics of Pacifica-KPFA community radio unions, a complex, controversial and well-documented subject. 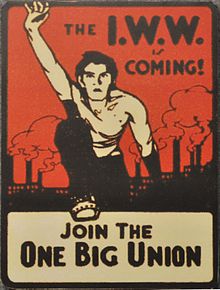 END_OF_DOCUMENT_TOKEN_TO_BE_REPLACED
Add Your Comments
Latest Comments
Listed below are the latest comments about this post.
These comments are submitted anonymously by website visitors.
TITLE
AUTHOR
DATE
Thanks
Bob English
Support Independent Media
We are 100% volunteer and depend on your participation to sustain our efforts!