Photo of Faith Leaders singing "We Shall Not Be Moved" at the State Capitol by Dan Bacher. 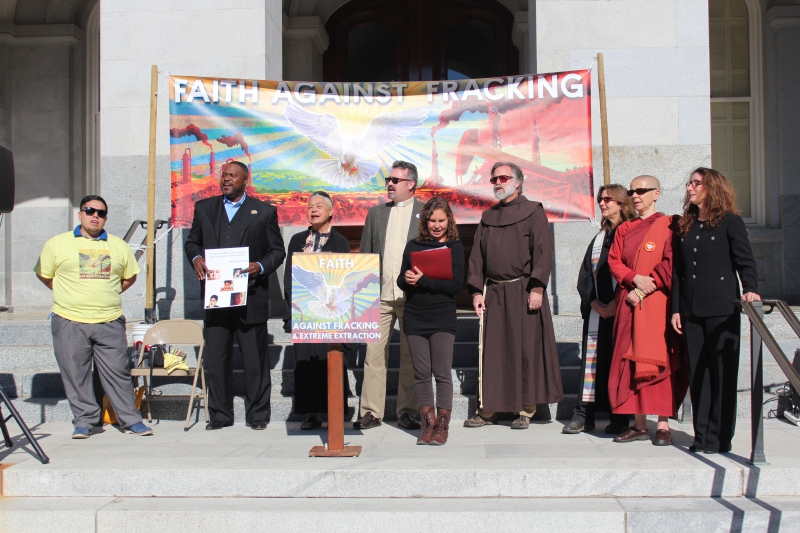 As Governor Jerry Brown was getting ready to portray himself as a "climate leader" at the upcoming United Nations Climate Summit in Paris, faith leaders, environmental advocates, frontline communities and residents from across California rallied at the State Capitol in Sacramento on November 12 to call on Brown to halt all dangerous oil and gas drilling practices, including fracking.

They urged Brown to "remember his own religious studies, the moral imperative for planet stewardship, and need for climate justice when heading into global discussions around fossil fuel extraction," according to a news release from Californians Against Fracking.

Brown has studied both Catholic theology and Zen Buddhism. After entering Santa Clara University in 1955, the young Jerry Brown left after a year. He then attended Sacred Heart Novitiate, a Jesuit novice house, with the intent of becoming a Catholic priest, Brown left the novitiate after three years, enrolling at the University of California, Berkeley in 1960,

Brown also traveled to Japan to study Zen Buddhism after serving as governor from 1975 to 1983 and losing a race for U.S. Senate,

In the hope of pressuring Brown to ban fracking and other extreme oil drilling methods, 50 people attended a rally on the south steps of the State Capitol during which leaders in the Native American, Jewish, Christian, Buddhist and other faith traditions led a prayer and meditation. Faith leaders joined forces with environmentalists coinciding with this year’s Global Frackdown to Paris, an annual international day of action to ban fracking and other unconventional oil and gas extraction techniques worldwide.

The faith leaders pointed out the contradiction between Brown's claim to be a "climate leader" and his support of fracking and oil drilling in California. They said the Governor has "stood by as oil companies continue to employ dangerous drilling methods—like fracking, acidizing and cyclic steaming—despite mounting evidence of their harmful impacts to the environment and human health."

Faith leaders wrote, “We are mindful that the climate crisis places unequal burdens on the world’s poor, who are already suffering increased rates of sickness, death, and displacement as a result of human-induced climate change.”

They cited a recent state-commissioned study by the California Council on Science and Technology (CCST) concluding that operations close to human populations present substantial public health concerns, including disproportionate risks on sensitive populations, including children, pregnant women, the elderly, and those with pre-existing conditions. More than 1.67 million Californians live within a mile of an active oil well in the Los Angeles Basin alone.(https://ccst.us/projects/hydraulic_fracturing_public/SB4.php)

In further analysis of the CCST report, Californians Against Fracking revealed that the study itself provides "numerous reasons to ban fracking outright." (http://californiansagainstfracking.org/top10/)

"Leave the oil in the ground - we don't have to squeeze every drop of oil out of Mother Earth," she said. "We need to ban fracking. Climate leaders don't frack. Governor Brown is supposed to represent us, not Big Oil".

Kristen Debler, Coastal Miwok and a member of the Federated Indians of Graton Rancheria, said people must speak up for Mother Earth, pointing out the big threat to California's water resources that fracking represents.

"We can't live without water," she said. "It is our soul and life blood - and we must protect our water."

David Braun, with Faith Against Fracking, quipped, “If Jerry Brown thinks that being a climate leader means helping the oil industry get away with carbon intensive practices like fracking, then he clearly needs an intervention; today, we’re praying for him.”

“While Jerry Brown’s leadership on climate change has been admirable, we can’t help but notice how his policies, which enable the worst climate polluters and support fracking, undermine his best intentions," said Reverend Ambrose Carroll, with Church by the Side of the Road. "Half measures on fracking and other dangerous extraction techniques won’t save the climate, or our communities.”

“As Governor Brown prepares for Paris, we are urging him to take bold action that will set an example for other world leaders," said Mark Schlosberg, a national organizer with Food & Water Watch. But Governor Brown will not be a climate leader as long as he continues to promote fracking and increased extraction of oil and gas here in California, which has resulted in pollution of our water, crops, and communities. Rather than focusing on Paris, Governor Brown should focus on California, reign in the oil and gas industry, and ban fracking now."

Reverend Laurie Manning, with Skyline Community Church in Oakland, stated, “It is the moral responsibility of all people of faith to stand with those who are suffering as a result of these toxic enterprises, like fracking and extreme extraction.”

Shoshana Wechsler, with Sunflower Alliance, said, “As persons of faith and seekers of justice, we decry an energy system that mandates sacrifice zones, allowing entire communities to be poisoned and water and land contaminated. We call on Gov. Brown, himself a man of faith, to heed our call to end fracking and other extreme oil extraction now.”

Gustavo Aguirre, Jr., Organizer with the Central California Environmental Justice Network, spoke on the four-day "Fast Against Fracking" that took place in Bakersfield starting on November 5 to oppose a plan by the Kern County Board of Supervisors to fast track extreme oil drilling in Kern County. (http://www.indybay.org/newsitems/2015/11/06/18779745.php)

In September, Californians Against Fracking released a short documentary film in which faith leaders discuss the intersection of faith and environmental stewardship. Watch the full video at: http://bit.ly/1Op6cwK.

Californians Against Fracking is a coalition of about 200 environmental business, health, agriculture, labor, political and environmental justice organizations working to win a statewide ban on extreme drilling including fracking. Follow @CAagainstFrack on Twitter.

In breaking news, the Paris Prefecture of Police has announced that due to the tragic events that took place on November 13, where over 150 people were killed by guns and bomb blasts, the Global Climate March planned for November 29 and the December 12 mobilizations planned will not be allowed to proceed in Paris.

Activists responded in a press release that "we are more determined than ever to make our voices heard on climate justice and throughout both weeks."

"We realize the gravity of the situation, but now more than ever, we need to find creative ideas to call on people to unite around climate action,” said Juliette Rousseau, coordinator of the Coalition Climat 21, the network of NGOS coordinating the mobilisations (http://www.commondreams.org/newswire/2015/11/18/plans-mobilizations-paris-cancelled-authorities-french-activists-more-determined?utm_campaign=shareaholic&utm_medium=email_this&utm_source=email)

The mainstream media and much of the "alternative" media have provided mostly fawning coverage of Governor Jerry Brown's grandstanding at climate conferences and photo opportunities around the world as he continues to strongly support the expansion of fracking and other extreme oil extraction methods in California.

However, the latest Big Oil scandals in the Brown administration have finally forced even the reluctant mainstream media to take a closer look at Brown's very close relationship with the oil industry and his avid support of the expansion of fracking in the state.

In the latest scandal. an investigation by the Associated Press reveals that the Governor ordered the state oil and gas regulatory agency to survey his private property, a ranch in Northern California for drilling potential. This raises questions about the governor’s use of public resources and sheds light on his handling of oil and gas operations in the state. (http://bigstory.ap.org/article/7780d1a9b1fd436284a40a1f6d6bd969/ap-exclusive-brown-had-state-workers-research-oil-ranch)

The latest hypocritical action by Brown follows his appointment of Bill Bartling, 61, of Bakersfield, who has worked as an oil industry executive and consultant, to district deputy for Bakersfield in the Division of Oil, Gas and Geothermal Resources (DOGGR) at the embattled California Department of Conservation. (http://www.eastbayexpress.com/SevenDays/archives/2015/10/12/governor-brown-appoints-republican-oil-executive-to-be-industry-regulator)

Ironically, Brown made the controversial appointment on the same day that DOGGR, the state agency in charge of regulating the state’s oil and gas industry, released a critical internal review documenting the poor job it has been doing.

The expansion of fracking in California – and the resulting pollution of groundwater supplies – is just one of the many environmentally devastating policies that the Brown administration has promoted, as I have pointed out in article after article.

Governor Brown has relentlessly pushed the salmon-killing Delta Tunnels under the Bay Delta Conservation Plan(BDCP)/California Water Fix; has promoted water policies that have driven salmon, steelhead, Delta smelt and other fish to the edge of extinction; presided over record water exports out of the Delta in 2011; backs the clearcutting of forests in the Sierra Nevada; and is a strong supporter of neo-liberal carbon trading policies that routinely promote environmentally ineffective and socially unjust projects across the globe.

For a complete discussion of Brown’s tainted environmental policies, go to: http://www.truth-out.org/speakout/item/30452-the-extinction-governor-rips-the-green-mask

For more information about Big Oil money and power in California, go to: http://www.indybay.org/newsitems/2015/11/06/18779728.php andhttp://www.eastbayexpress.com/SevenDays/archives/2015/07/29/californias-biggest-secret-oil-industry-capture-of-the-regulatory-apparatus 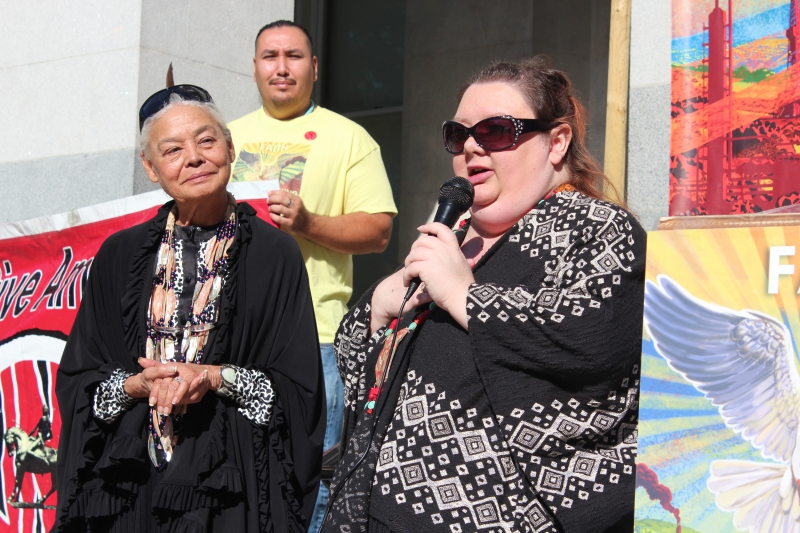 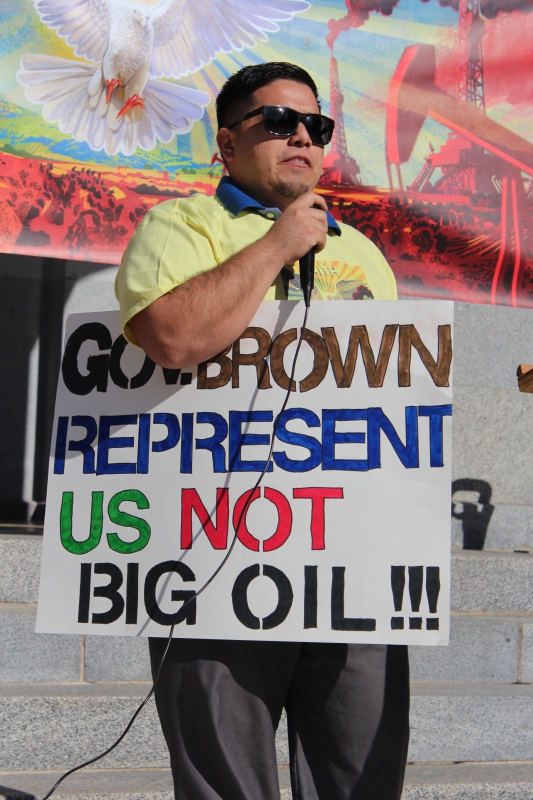 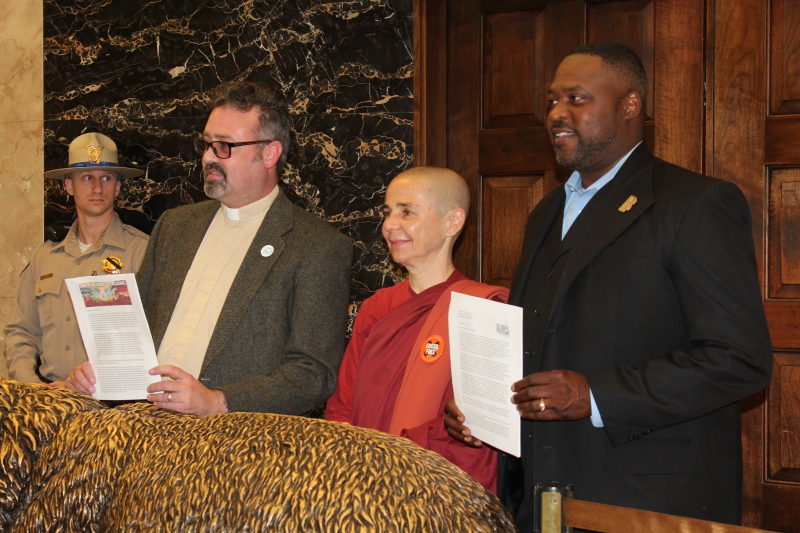 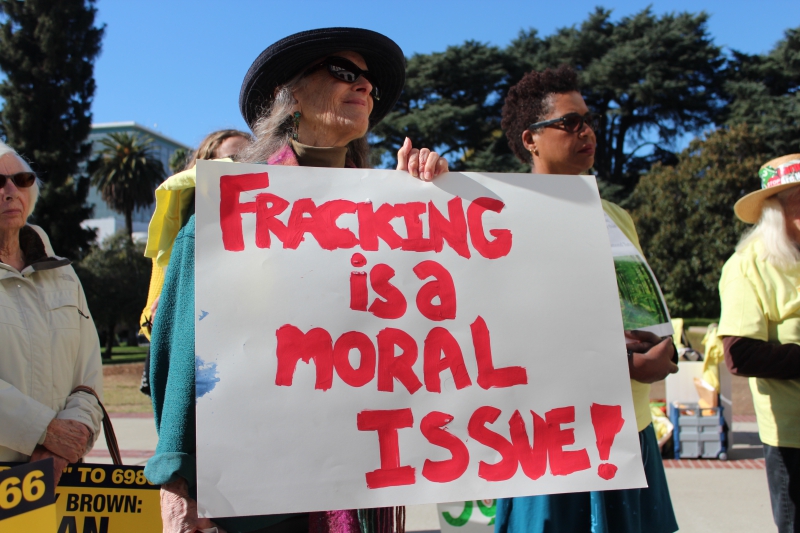 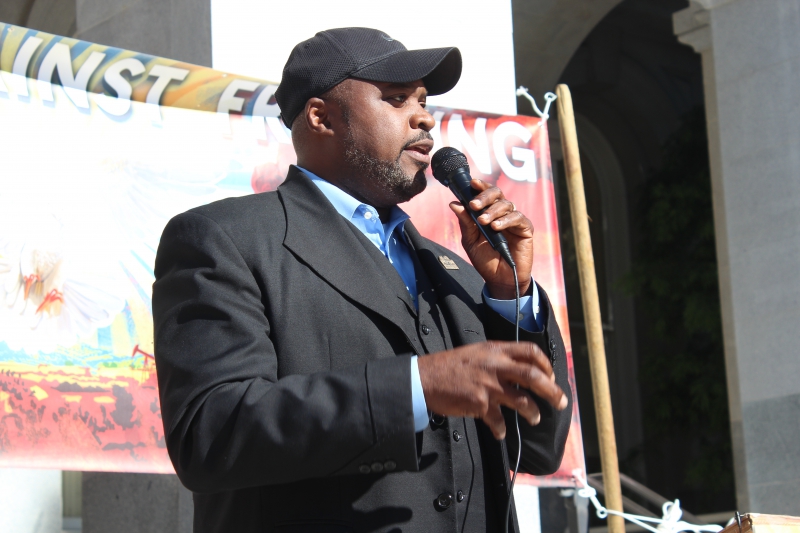 original image (5184x3456)
Reverend Dr. Ambrose Carroll, Senior Pastor of Church by the Side of the Road in Berkeley and founder of Green the Church, speaks before the faith leaders sing "We Shall Not Be Moved." Photo by Dan Bacher.
§David Braun
by Dan Bacher Wednesday Nov 18th, 2015 5:08 PM 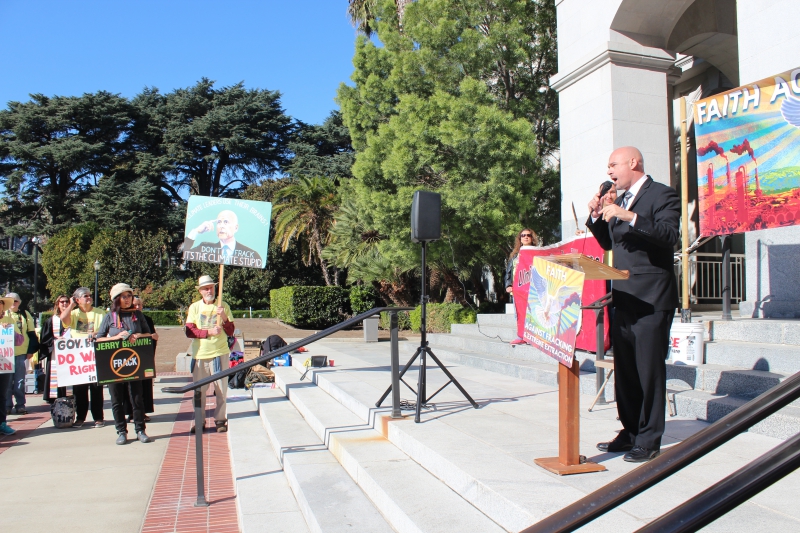 original image (5184x3456)
David Braun of Faith Against Fracking, says, "The science is in" regarding the devastating impacts of fracking on human health and the environment. Photo by Dan Bacher.
§Rabbi Nancy Wechsler
by Dan Bacher Wednesday Nov 18th, 2015 5:08 PM 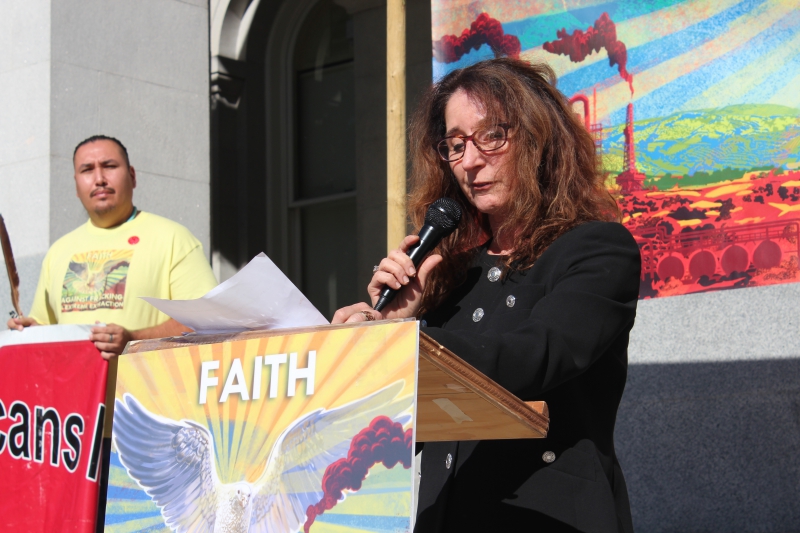 original image (5184x3456)
Rabbi Nancy Wechsler of Congregation Beth Shalom in Carmichael reads her statement at the rally. Photo by Dan Bacher.
Add Your Comments
Support Independent Media
We are 100% volunteer and depend on your participation to sustain our efforts!