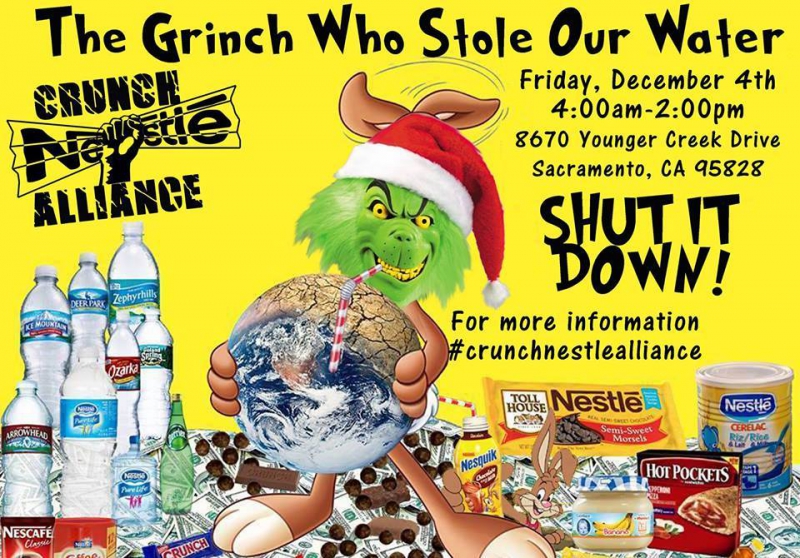 original image (960x670)
Nestlé: The Grinch Who Stole Our Water

The "Crunch Nestlé Alliance," the group that "shut down" the Nestlé Waters bottling plant in Sacramento in March 2015 and October 2014, will be protesting at the plant again on December 4, but this time the alliance is doubling down on a shut down.

This time the group is also going to shut down the Alhambra Water Company, owned by DS Waters of Atlanta, Georgia, located directly across the street from Nestlé Waters. The theme of the protest is "The Grinch Who Stole Our Water," according to Bob Saunders of the alliance.

“That’s right,” said Saunders. “In the midst of an extreme drought in its fourth year, an out-of-town bottling company is drawing water from Sacramento to go with the gluttony of Nestlé's water drawing and profiteering actions. Additionally the large amount of plastic waste (water bottles) that is generated by these companies, much of which ends up in our ocean, is another factor in the need to stop these companies from further damaging our environment.”

“Given the success of our two previous shut downs and our successful protest outside Governor Jerry Brown’s loft in midtown Sacramento this past summer, and the neglect by the city of Sacramento and its politicians, we decided it was time once again to step forth and protest and shut Nestlé down at their local water bottling plant and raise awareness to a higher level,” stated Saunders. “After all, they sure deserve a shut down.”

The Swiss-based Nestlé Corporation is notorious for its decades of human rights violations, water profiteering and environmentally destructive activities around the world. You can read about the March shut down at the Nestlé Waters Bottling Plant in Sacramento by going to: http://www.truth-out.org/speakout/item/29947-activists-shut-down-nestle-water-bottling-plant-in-sacramento

Saunders noted that Governor Brown, who is currently fast-tracking two massive salmon-killing Delta Tunnels under the “California Water Fix,” has yet to publicly speak the words “water bottling” or “fracking” as contributors to the drought crisis, nor has he asked either industry to slow down or put a moratorium on their operations until we at least make it out of the severe drought conditions.

“Both industries continue to operate according to business as usual, which is an obscenity as the state draws closer to our fifth year of a major and devastating drought,” said Saunders. “The burden of drought has been put primarily on the shoulders of the people, the average Californian, in cutting back water usage , with exemption after exemption granted groups, individuals and industries over the past six to nine months.”

In fact, growers statewide actually expanded their almond acreage by 150,000 acres during the current drought, as I documented in an East Bay Express article: http://eastbayexpress.com/SevenDays/archives/2015/05/15/californias-thirsty-almond-acreage-grows-by-150000acres-during-record-drought

Saunders asked several questions regarding agribusiness use of water during the drought that have yet to be addressed by state and federal water agency officials:

• Why aren’t growers, who use 80 percent of water used in the state of California, required to implement micro flooding, rather than relying solely on macro flooding, during the drought?

• Why aren’t farmers using gray water whenever and wherever they can?

• Why are large corporate agribusiness interests like Beverly Hills billionaires Stewart and Lynda Resnick, the owners of The Wonderful Company, still allowed to use enormous amounts of water while the rest of California scrimps for available water?

• Where is the “shared sacrifice” by these industries and groups that so many politicians talk about?

California’s reservoirs and aquifers are at some of the lowest levels in history, due to abysmal management of the state’s water resources by the state and federal governments during the drought.

“The future prospects seem grim even though many people hold out hope for a very wet El Niño winter,” said Saunders. “Sadly, the warm weather pattern of this winter’s predicted El Niño storms will bring little relief to our thirsty needs.”

During the current drought, the state and federal water agencies systematically drained Trinity, Shasta, Oroville and Folsom reservoirs, imperiling salmon and steelhead runs on the Sacramento and Klamath/Trinity River systems and bringing Delta and longfin smelt, green sturgeon and other fish species closer and closer to the abyss of extinction. This subsidized water was exported to corporate agribusiness interests irrigating toxic land on the west side of the San Joaquin Valley, Southern California water agencies and oil companies conducting fracking and other extreme oil extraction methods.

“California is literally sinking as a result of the drought, with little or no prospects for improvement or change,” emphasized Saunders. “And where is the comprehensive crisis team to deal with such an overall calamity?”

“So in accordance with much of the political inaction by the politicians, and especially by companies like Nestlé, the largest culprit of these predatory behaviors (and who are all still pumping massive amounts of water and bottling it while the state is going dry), we are going to call them out regarding their piggish ways and water profiteering and shut them down,” he said.

The theme of the event is “The Grinch Who Stole Our Water.”

You can also contact Bob Saunders, Crunch Nestlé Alliance, email RSaund3980 [at] aol.com, cell phone: 916-370-8251.
Add Your Comments
LATEST COMMENTS ABOUT THIS ARTICLE
Listed below are the latest comments about this post.
These comments are submitted anonymously by website visitors.