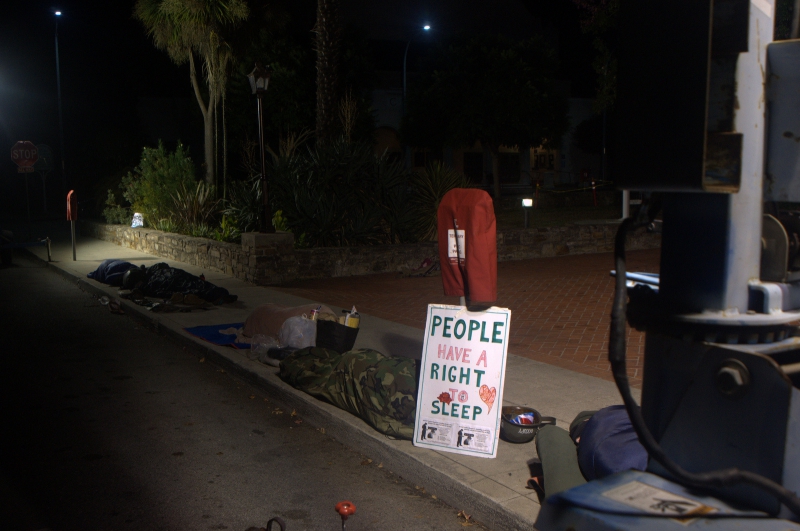 original image (1600x1063)
The Freedom Sleepers – the Santa Cruz activist group engaging in civil disobedience every Tuesday night in front of Santa Cruz city hall to protest the city's sleeping ban law – held their 17th civil disobedience protest last night, November 3. An organizer's head count reported 26 people sleeping out at city hall and on the sidewalks around it. Though police visited the protest late in the night to turn on three sets of diesel-powered construction lights rented from A-Tool Shed, they did not issue any citations, despite the many people sleeping out in direct violation of the city's camping ban.

The Freedom Sleepers provided peanut butter and jelly sandwiches, apples, and other donated food for anyone who came to or through city hall, as well as hot coffee to help warm folks up. First Alarm security guards stood staring at cell phones near the construction lights – which they have apparently been retained to watch over – as protesters gathered by the food table to talk and eat.

Some sleepers walked over to the city council chambers to sit in on a meeting called by the council under the broad heading of public safety. Officers from the Santa Cruz police department, including Chief Kevin Vogel, made presentations to city council on crime statistics for the area. Reports included specific data on violent crimes, property crimes, and so called “nuisance” crimes (quotes present on a paper detailing the council agenda for the night). The department also presented to the council on its employee recruitment and retention, which has apparently been quite dynamic. The council agenda report states the police department has hired 19 non-sworn staff since 2013 and lost 18, and in the same period hired 26 sworn officers and lost 19.

After the council meeting, a group of protesters informally met and spoke with City Councilmember Micah Posner. The group discussed upcoming items of interest with the councilmember, including an agenda item on a safe sleeping zone for unhoused residents of Santa Cruz that was to be raised on November 10, but has now been moved to November 24. According to Posner, the city council plans to hear an agenda item on bans of RV parking within the city, but could not hear the item on the ban without also including a discussion of the safe sleeping zone. Many unhoused residents of Santa Cruz live out of RVs. Some issue has been made of the number of RVs present in the affluent West Cliff neighborhood, with a recent Santa Cruz Sentinel article that mentions housed neighborhood residents complaining about the behavior of RV dwellers: http://www.santacruzsentinel.com/government-and-politics/20151013/santa-cruz-city-council-tightens-rules-on-rv-parking-near-steamer-lane.

The air was bitterly cold out last night at city hall. A weather.com report states that a minimum temperature of 47 Fahrenheit was recorded for yesterday in the 95060 zip code area. Many sleepers, housed and unhoused, brought blankets, sleeping bags, or layered clothing to sleep in and deal with the night's temperatures, but what people brought was not always enough. Some sleepers covered up on the sidewalk with only a single blanket not large enough to cover the entire body. A welcome donation of blankets and sleeping bags provided some protection for protestors without sleeping gear, but was not enough to provide for everyone present. Luckily for the protesters, there was no rain at city hall last night.

The Freedom Sleepers show no signs of stopping their protests, but are concerned about the upcoming changes in weather. Cold is not the only thing they are worried about. The forecast for this year's el Niño indicate a strong possibility of powerful rainstorms, with chances of flooding within Santa Cruz city limits. It's not only challenges to the protest the sleepers are worried about, it's also concerns about shelter for unhoused people. The city council voted last week to provide some funding to open the National Guard Armory winter shelter in Delaveaga Park. That facility has faced criticisms related to cost effectiveness, accessibility, and safety for residents, but also can only house a fraction of the houseless population in the city. Without more shelter space, unhoused people may be forced to camp or trespass in violation of city laws in order to guard their own lives. The city and its police force may face a dilemna in enforcing the law; evict people from sheltered areas, or allow them safe camping places to ride out bad weather? Time will tell whether the city will choose a compassionate response or if a law and order approach will rule the day.
§Animal liberation
by zh Wednesday Nov 4th, 2015 3:58 PM 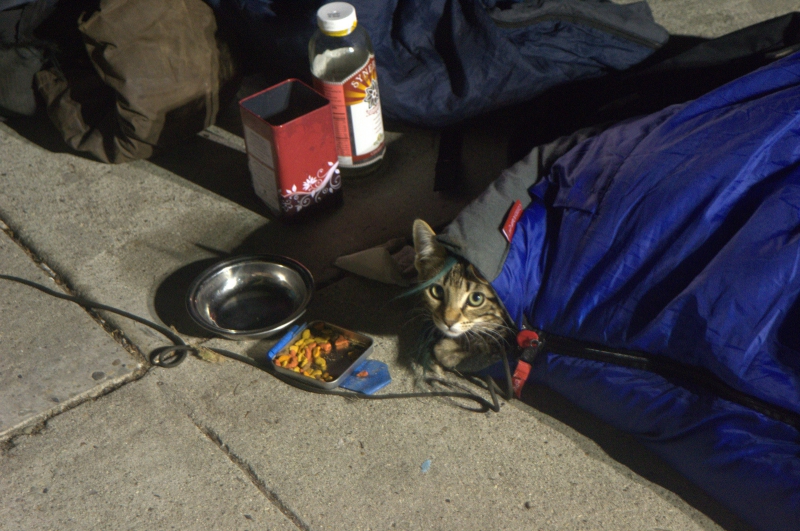 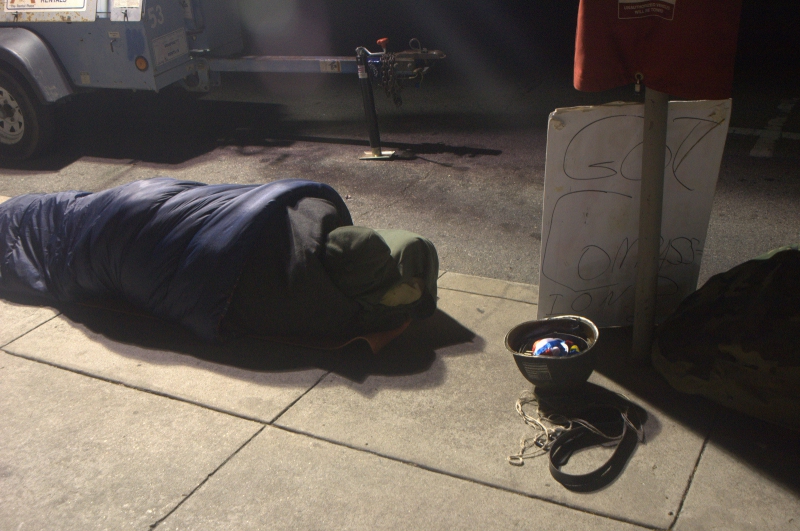 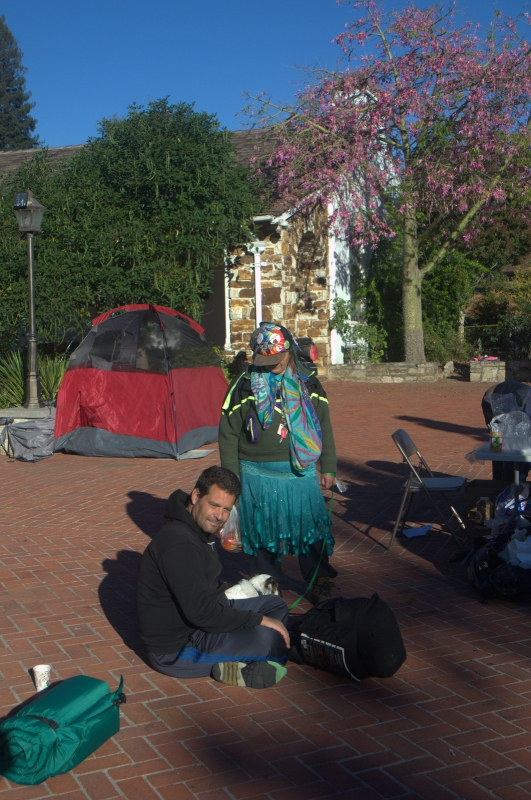 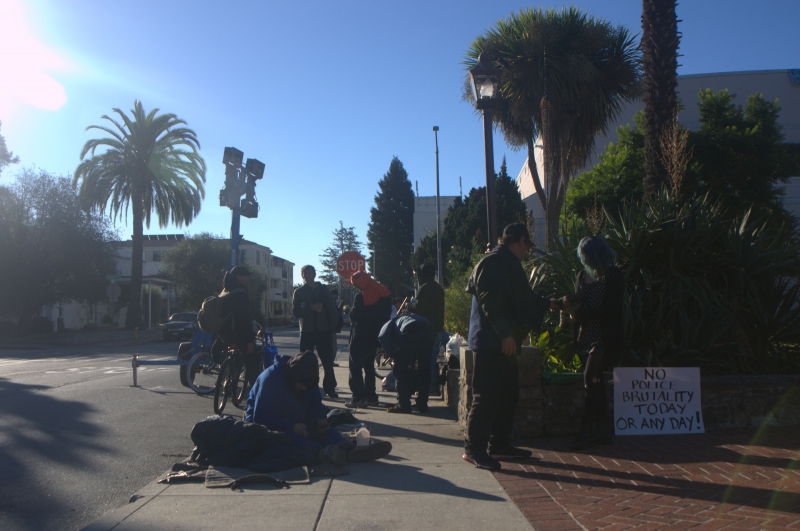 original image (1600x1063)
Sleepers congregate over breakfast and coffee
Add Your Comments
LATEST COMMENTS ABOUT THIS ARTICLE
Listed below are the latest comments about this post.
These comments are submitted anonymously by website visitors.