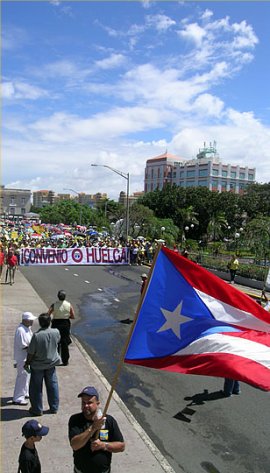 As you know the economic situation in the US colony of Puerto Rico continues to deteriorate rapidly as the corporate class, led by the unscrupulous vulture hedge funds, Wall Street and banks, increasingly imposes greater hardships on the poor and working class. Despite many setbacks and repression, the fight-back continues with the leadership of independent unions together with rank & file, grassroots, community and progressive activists.

The Teachers Federation of Puerto Rico (FMPR) has been a leader in these struggles for many years, and, as you will read in the attached letter, has been summarily attacked by the Government/Employer, who has been unrelenting in its attempts to destroy the union completely.

In 2008, we proudly worked with the FMPR Support Committee of New York. This campaign mobilized essential financial and political solidarity across US (particularly among the Puerto Rican diaspora and labor) for the FMPR’s historic 10-day strike that stopped the drive to charter-privatize the school system.

Today, the FMPR again needs our help! There are opportunities now, after several years (finally successful) of legal and political battles, to get the union back on its feet. What is now lacking are initial funds to support an intense recruitment drive that will guarantee the union's solvency.

Please read the attached letter from the union’s president, Mercedes Martinez and Secretary-Treasurer, Ana Guzman to learn more about the current Puerto Rican reality and the teachers’ role in the island’s growing progressive movement.

Consider offering your individual and organizational solidarity to this important struggle that will have repercussions in the US and beyond. Any donation, no matter how small, will make a difference.

Please feel free to share this email with your contacts and organizations.

In solidarity and struggle,

On behalf of the Teachers Federation of Puerto Rico (Federación de Maestros de Puerto Rico or FMPR), we extend our warm solidarity to you and the struggles you are engaged in. We would like to update you as to the current political and social situation in Puerto Rico, particularly (but not exclusively) as it affects the educational community: students, parents, teachers and families, as well as to solicit your support for our ability to escalate our involvement in these important struggles.

Due to the colonial relationship between the United States and Puerto Rico, conditions imposed on the island have important repercussions on working people of the US. From drug experimentation and forced sterilization of 1/3 of Puerto Rican women of child-bearing years to the destruction of the agrarian economy, from obscene tax breaks for multi-national corporations while the majority of the population lives at or below the poverty level to the more recent extraordinary austerity program imposed upon our people, our ability to fight back against such draconian attacks is a critical element in our common struggle against the neo-liberal agenda.

As in the US, the entire public educational system is under attack, from pedagogy to labor rights, from privatization efforts to the dismantling of community participation. While some of the most vicious attacks have focused on educators, similar assaults are increasing against unionized public sector workers, and those in the private sector continue as well.

The Federal Department of Education and the Governor of Puerto Rico (Alejandro García Padilla) are employing a monumental offensive to shut down more than 300 schools, impose charter schools, destroy teachers’ labor benefits, and privatize public education in our island.

The process of Federalization, which began with the implementation of the “No Child Left Behind Law,” has intensified with the rollout of the so-called “Flexibility Plan” in June 2015. Similar to the conditions attempted in the US, that federal plan mandates a punitive evaluation system for teachers based on fraudulent standardized test results; abrogation of negotiated teachers’ rights, imposes a workload that makes quality education an impossibility, and most recently penalizes students who participate in our largely successful opt-out of standardized tests movement.

The Federalization of the Department of Education in Puerto Rico vis a vis this Flexibility Plan:

• Makes a lucrative business out of education

• Disallows an environment that fosters creativity and critical thought

• Facilitates the economic and cultural oppression of Puerto Ricans.

This reality, combined with the profound crisis this model is encountering (resulting in the elimination of many thousands of government jobs and the deterioration of benefits), has dramatically increased already high rates of unemployment and dependency, and forced the migration of more than a half million Puerto Ricans in the past ten years. The inability of the Puerto Rican government to pay the public debt (a good portion of which involves the inadequate funding of Medicaid and Medicare and long-standing imposed dependency conditions) and the

devaluation of that debt has set the stage for the IMF-recommended imposition of extraordinary fiscal measures against our people.

The economic colonial model based on cheap manual labor, tax exemptions for US companies, and the trade restrictions that favor US products and prohibit alternative economic programs have collapsed. The Free Market Treaties, the restructuring of the world’s production towards Asia, and the unilateral elimination of industrial promotion mechanisms by the United States in our island, mortally wounded our theoretical economic model of “progress.”

To avoid a political crisis, our respective governments increased the transference of federal funds—and thus the massive public debt--to artificially maintain our colonial model and ensure monumental profits for the North American industries ($35 billion per year). As the international economic crisis intensified, US austerity programs mushroomed and the federal funds that our island receives stagnated, resulting in an enormous contraction of our colonial economy. Our corrupt government was rendered incapable of generating profits and paying the public debt, now at $72 billion.

In August 2015 Puerto Rico’s government did not comply with the payment of the public debt (controlled by Wall Street) and recognized its insolvency. Under the advice of the International Monetary Fund (IMF), the government is working on a Fiscal Crisis Measure Plan, transferring the weight of the crisis to the shoulders of the working class, and guaranteeing continued profits for the vulture financial sector—the sector that contributed to the bulk of public debt in the first place!

The Teachers Federation of Puerto Rico

The FMPR is a militant labor organization with profound roots in the teaching profession and school communities. For more than 40 years our organization has developed, alongside parents, extraordinary struggles to guarantee an education of excellence and the rights of parents, teachers and, students.

Our tradition of struggle has enabled us to build a labor movement in education with a social commitment, thus aligning with the interests and demands of the communities we serve. Three national strikes (1974, 1993, 2008), dozens of national walkouts and hundreds of individual school strikes have made the Teachers Federation one of the principal instruments of struggle of the Puerto Rican working class.

This history has made our union a target of repression of the government-employer. It is the only labor union in Puerto Rico the government has decertified as an exclusive teachers’ representative (2008). It was also decertified as a bona fide (professional) organization (2009). It suffered the unjust termination of eleven of its executive committee members (2010) and, due to the colonial federal courts’ protracted economic attacks, FMPR was forced to declare bankruptcy in 2011.

Since this time, FMPR has maintained its labor and community activism. Through legal efforts and organizing among teachers and within our communities, we have been able to move out of Chapter 11 and achieve the right to petition for exclusive representation once again.

Our efforts are currently dependent on volunteers and a miniscule staff of officers (living on poverty wages) to engage in the following:

1. Continue the fight against privatization, particularly of public education.

2. Accelerate the coordination of various sectors of the population to stop the neoliberal measures presented by the government to manage its financial crisis and thus impoverish our people further.

3. Educate and organize teachers to ensure our financial viability via dues and similar means so that we can have full time organizers on the ground as conditions escalate.

The Need for “Start-up” Funds

We require an initial fund to be able to pay approximately 13 Area Representatives (elected members of our Executive Committee) so that they can work full-time as labor and community organizers for one year. We estimate this cost to be about $300,000 or about $23,000 per organizer. Our objective is to be financially independent at the close of this period so that this work can be ongoing.

We are appealing to progressive organizations and individuals at this time for donations to implement our plans as the crisis has impoverished our own activists as well, and the daily struggle for survival has intensified.

Upon request, FMPR will send a quarterly report of income, expenses and tasks paid for by the fund to our donors. Donations, as well as messages of solidarity, and updates as to your own analysis, challenges and successes (of which we are most interested in understanding) will be graciously welcome. Our struggles complement our respective nations and people.

On behalf of the Teachers Federation of Puerto Rico, we express our gratitude for your support and solidarity. We humbly offer whatever we can to assist you in your efforts, so similar to our own. In these times it is necessary to join together to achieve a just society, founded in solidarity and fraternity.

Prof. Ana I. Guzman Secretary-Treasurer FMPR Email: anitaguz(at)gmail.com
https://www.facebook.com/amprnet/
Add Your Comments
Support Independent Media
We are 100% volunteer and depend on your participation to sustain our efforts!