Add an Event
Newswire
Calendar
Features
Home
Donate
From the Open-Publishing Calendar
From the Open-Publishing Newswire
Indybay Feature
Publish to Newswire
Add an Event
Related Categories: California | Santa Cruz Indymedia | Environment & Forest Defense | Health, Housing & Public Services
Public Interest Groups Support California Intent to Label Glyphosate Carcinogenic
by via Center for Food Safety
Tuesday Oct 20th, 2015 2:17 PM
SACRAMENTO, CA (October 19, 2015)—Today, nearly 20 food, farming, public health and environmental organizations submitted a letter (see PDF) in support of the Office of Environmental Health Hazard Assessment’s (OEHHA’s) determination to list glyphosate as a substance known to the State of California to cause cancer under the Safe Drinking Water and Toxic Enforcement Act of 1986 (aka Proposition 65).
On September 4, OEHHA issued a notice of intent to list glyphosate under Proposition 65 as a chemical known to the state to cause cancer. Under California law, “[s]ubstances listed as human or animal carcinogens by the International Agency for Research on Cancer (IARC)” must be listed under Proposition 65. IARC is an arm of the World Health Organization, and the world’s leading authority on cancer, and recently concluded that “[t]here is sufficient evidence in experimental animals for the carcinogenicity of glyphosate.”

Today’s letter, written by Center for Food Safety staff scientists, affirms the conclusions of the IARC and adamantly supports OEHHA’s decision to list glyphosate under Proposition 65.

“The U.S. Environmental Protection Agency (EPA) has known for years that glyphosate probably causes cancer, yet the agency has allowed Monsanto and other companies to sell more and more of it every year, without further regulation or labeling. In the absence of federal action, it is imperative that California be a leader in this issue by requiring labeling of products containing glyphosate,” said Rebecca Spector, west coast director at Center for Food Safety.

"Multiple studies cited by the International Agency for Research on Cancer have found that glyphosate causes cancer in the kidneys, pancreas, liver and other organs when administered in the diets of mice and rats," said Dr. Michael Hansen, senior scientist with Consumers Union, the policy and advocacy division of Consumer Reports. "These findings should warrant caution for regulators, and we expect this will result in warning labels on many consumer products for the home and garden that contain glyphosate."

Glyphosate is the world’s most heavily used conventional pesticide, with over 280 million lbs. sprayed on American cropland each year. Most is applied to Monsanto’s genetically engineered, glyphosate-resistant corn, soybeans and cotton, which each represent roughly 90% of respective crop acres. In California, glyphosate is sprayed on more acres than any other pesticide. With such massive use comes increasing exposure, and Glyphosate has been detected in the air, water and rainfall, in foods, and in human urine and blood.

“Under California’s science-based rules, the state must add glyphosate to its Proposition 65 list of chemicals that can cause cancer,” said Caroline Cox, research director of the Center for Environmental Health, which has a nearly 20 year track record of successful Prop 65 litigation. “People have the right to know before they buy Roundup that exposure to this product’s active ingredient can cause cancer. It’s far past time for stronger rules to protect our health from this dangerous pesticide.”

"Consumers have a right to know that a dangerous chemical in Roundup has been found to cause cancer. If our federal agencies won't tell us, then the state should - and that's what this listing will do," said Jason Pfeifle, public health advocate at CALPIRG.

OEHHA has a public comment period on this issue open until October 20th. 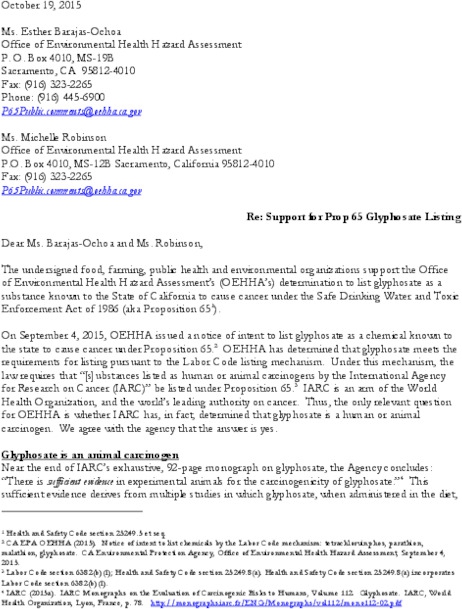 Download PDF (243.7KB)
Add Your Comments
Support Independent Media
We are 100% volunteer and depend on your participation to sustain our efforts!