Add an Event
Newswire
Calendar
Features
Home
Donate
From the Open-Publishing Calendar
From the Open-Publishing Newswire
Indybay Feature
Publish to Newswire
Add an Event
Related Categories: San Francisco | Animal Liberation | Environment & Forest Defense
Coyote Hazing: Learning to Live with Urban Coyotes in San Francisco
by D. Boyer
Sunday Oct 18th, 2015 8:59 AM
We can either kill or remove the urban coyote or we must learn to live with them. Residents in San Francisco’s Stern Grove recently experienced two urban coyote attacks. In one attack a small dog was seriously injured, and in the other attack a small dog wandered away from its owner, into a spot where an urban coyote was lurking, but never returned. Both pets were allegedly unleashed. 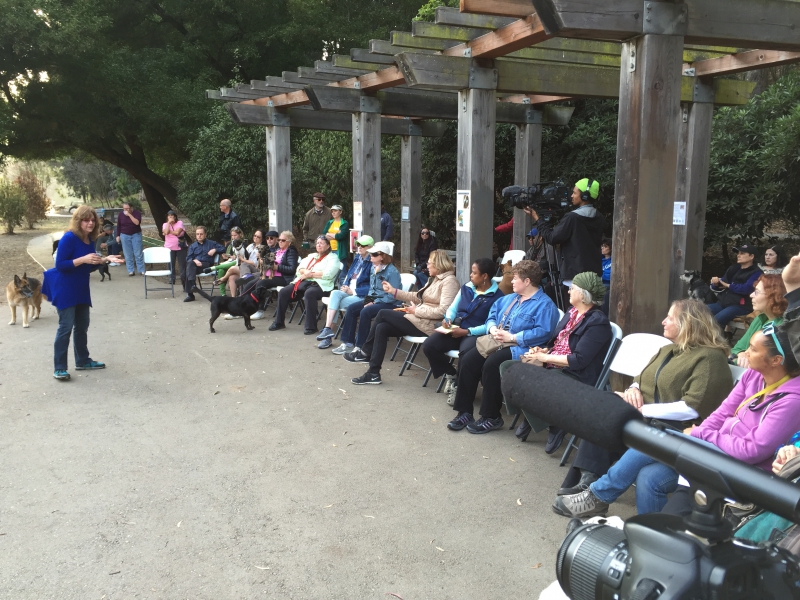 original image (3264x2448)
Urban coyotes are everywhere, from Chicago, to New York’s Central Park, to Washington D.C. and finally in many of San Francisco’s urban parks. Their presence is a success story, but is still relatively new when it comes to people feeling comfortable with them during close encounters. Urban coyotes adapt well to urban environments, and they are good at staying illusive and avoiding human contact; however if an unleashed small pet dog wanders into their area a coyote will take the opportunity to attack it. Historically urban coyotes outlive the rural Coyotes with motor vehicles being the biggest threat to their lives. Urban coyotes are mostly nocturnal, but if they are habituated with food some will wander their territory during the day.

The non-profit Project Coyote, “is a North American coalition of wildlife scientists, educators, predator- friendly ranchers and community leaders, promotes compassionate conservation and coexistence between people and wildlife. As a national non-profit organization based in Northern California, Project Coyote works to change negative attitudes toward coyotes, wolves and other native carnivores by replacing ignorance and fear with understanding, respect and appreciation. All of our work through education, science, and advocacy strives to create fundamental and systemic changes in the ways wild carnivores are viewed and treated in North America.” More information can be found on their website. Project Coyote

As part of their mission Project Coyote creates workshops that teach residents or citizens how to safely co-exist with urban coyotes. One workshop called "Coyote Hazing Field Training" was recently held in San Francisco’s Stern Grove. The workshop aimed to teach dog owners and other residents what is coyote hazing and how it can be used to keep people and dogs safe when encountering an urban coyote. The alternative to learning to live with urban coyotes is simple. Gina Farr, Project Coyotes National Coyote Educator & Communications Advisor said “we would have to basically become killing machines. We could go into our urban parks and either trap or shoot the coyotes then put up fences and gates, and that would be the only way to keep them out.”

Coyote hazing is a tool that dog owners and other citizens can use to safely keep urban coyotes at a safe distance. According to Project Coyotes Coyote Hazing Field Guide, hazing is the act of “scaring a coyote away from you, your yard, or your neighborhood.” I have attached the coyote hazing guide in this post below. There are two types of hazing active and passive. Passive hazing entails that homeowners “remove attractants” to create less favorable conditions for urban coyotes. Passive hazing also means not feeding your pets outdoors, cleaning around bird feeders, and installing motion detection lighting or sprinklers. Active hazing means scaring a coyote away from you when one is encountered. Safe ways to haze a coyote are using noise makers, such as placing pennies in a can, using whistles, bells and or pots and pans. Another effective hazing technique is by acting big and loud, and waving your arms over your head, and make that coyote afraid of you, but do not throw anything at it. More information on the effective ways to haze coyotes can be read in the attached coyote hazing field guide. Please do not haze if you suspect a coyote is sick or injured and during the months March-July, which is when they den and possibly raise their families. It is not recommended that you haze a coyote if it is a safe distance from you, or your dog. A safe distance is 30 feet. 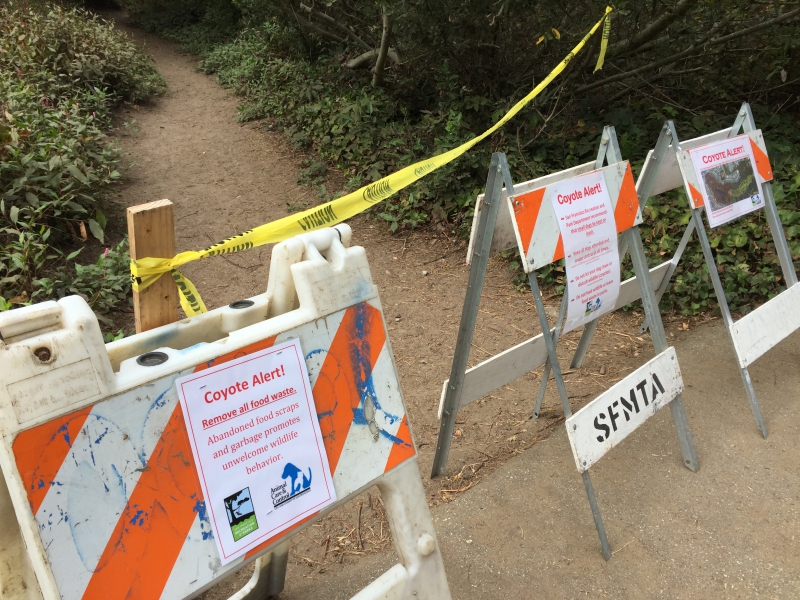 original image (3264x2448)
The signage was put-up after a small unleashed pet dog wandered away from it's owner into coyote territory and never returned.
§Coyote alert signs.
by D. Boyer Sunday Oct 18th, 2015 8:59 AM 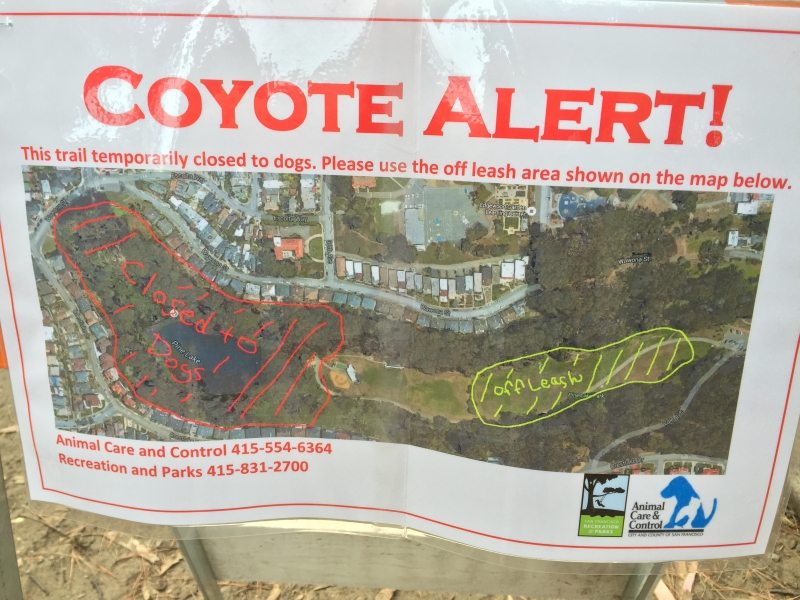 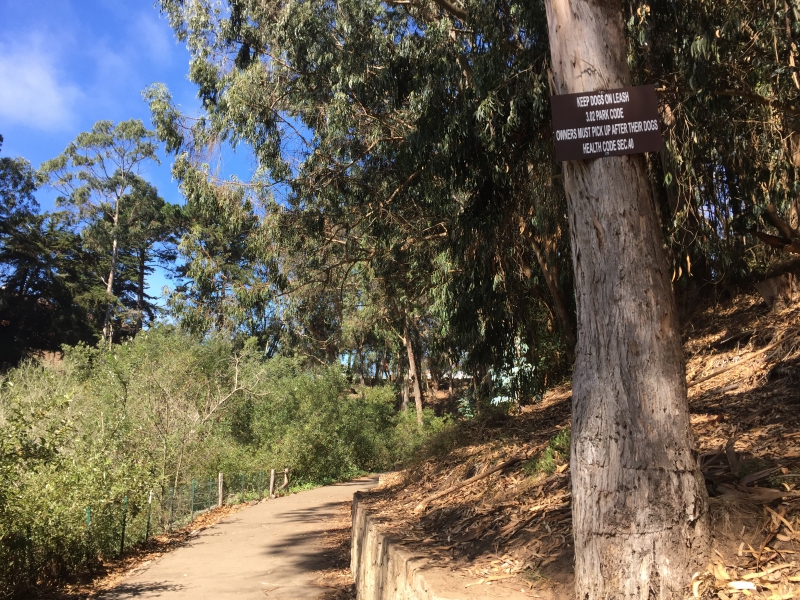 original image (3264x2448)
If you don't officials to become killing machines to remove coyotes then we must all follow the rules.
§Be Coyote Aware Flyer
by D. Boyer Sunday Oct 18th, 2015 8:59 AM 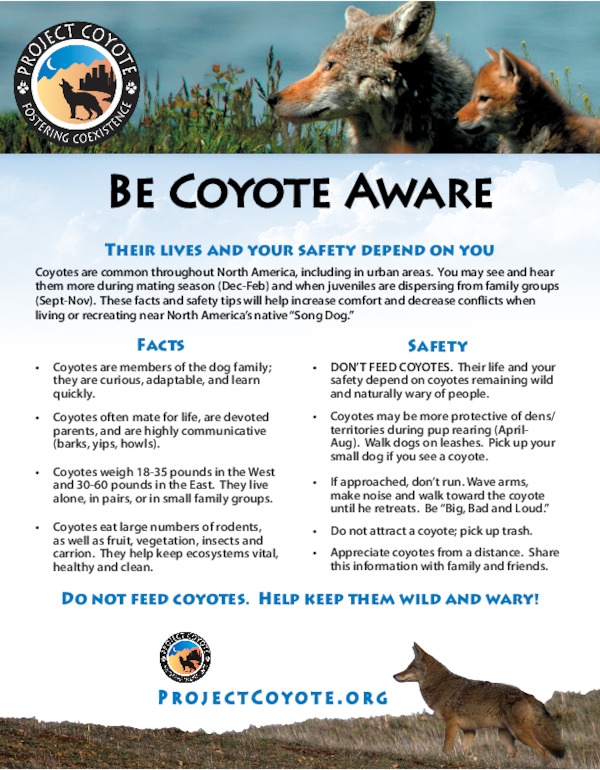 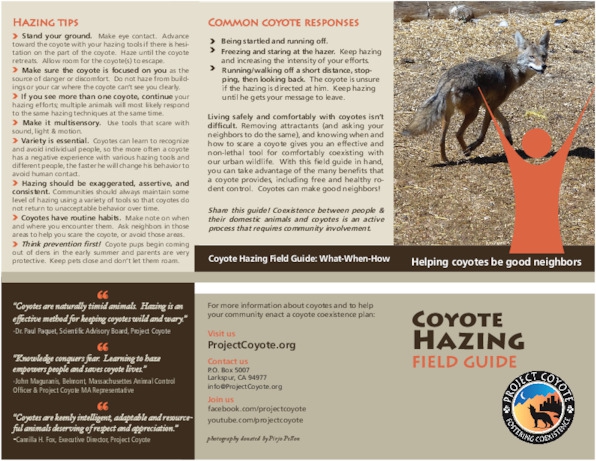 Download PDF (3.3MB)
This guide is produced by Project Coyote.
§Urban Coyote Behavior
by D. Boyer Sunday Oct 18th, 2015 8:59 AM
Copy the code below to embed this movie into a web page:
Download Video (18.0MB) | Embed Video
Coyotes are dogs so they act like dogs. If you leave food, garbage, or other attractants laying around on the ground in coyote country they will find it and then become habituated by food.
§Urban Coyote from Golden Gate Park
by D. Boyer Sunday Oct 18th, 2015 8:59 AM 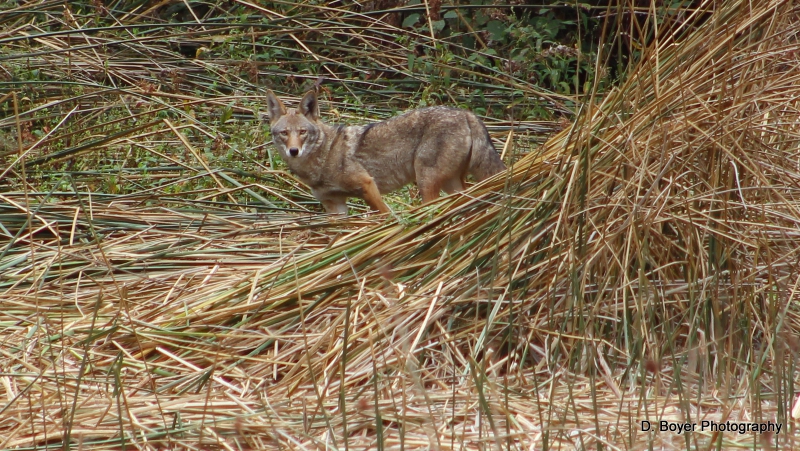 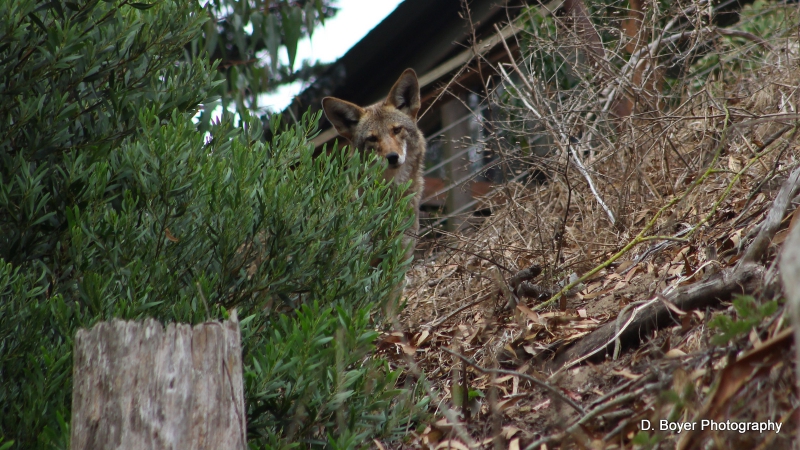 original image (1600x900)
Yes this urban Coyote has a name, and it is Trevor. He inhabits the area around Pine Lake Park in San Francisco's Stern Grove park.
§This coyote is obviously habituated by food.
by D. Boyer Sunday Oct 18th, 2015 8:59 AM 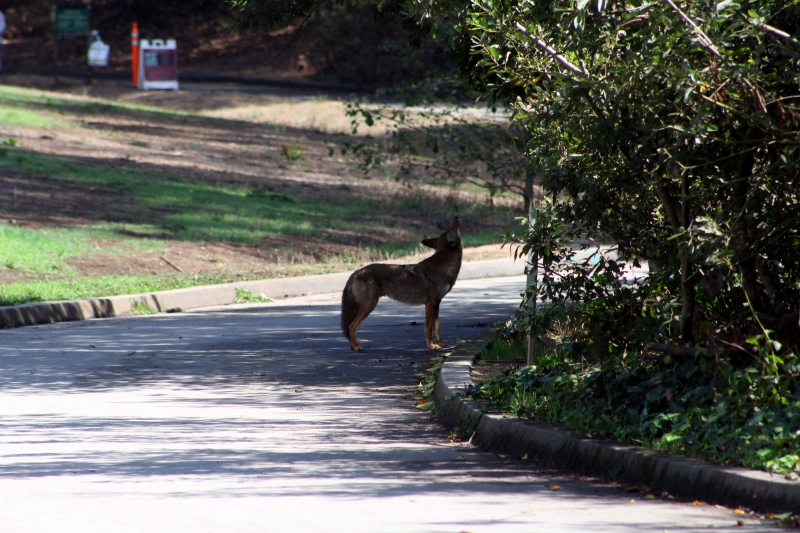 original image (5184x3456)
Dog owners and walkers sometimes take treats with them on their walks, but what they don't know is that a coyote can smell those treats and they will go investigate the smell. In this photo the coyote is getting his scent. They stick their noses up in the air and then they go after it.
§Accidental encounter
by D. Boyer Sunday Oct 18th, 2015 8:59 AM 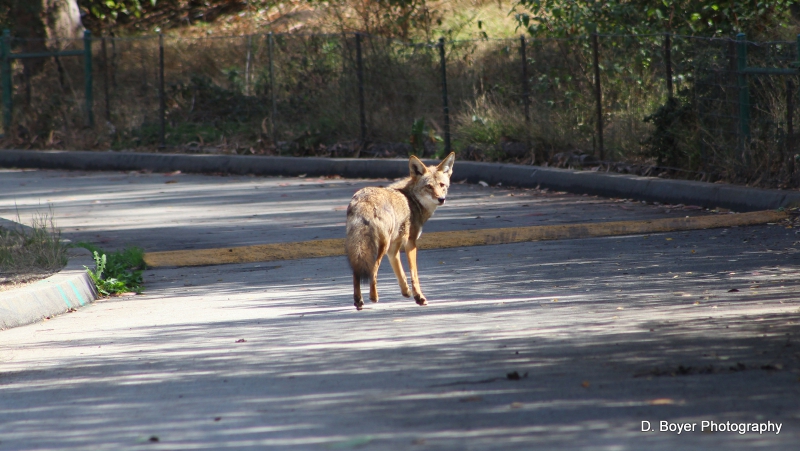 original image (1600x902)
There is a rule in the wildlife photography world that says we must stay at least 30 feet away from all wildlife. But on occasion I have close encounters, and cannot get 30 feet away.
§Feeding wildlife is illegal in San Francisco City and County limits.
by D. Boyer Sunday Oct 18th, 2015 8:59 AM 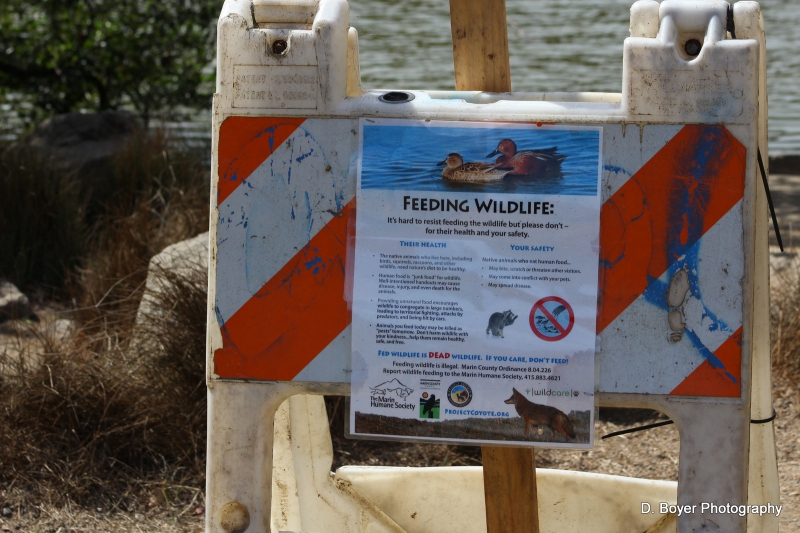 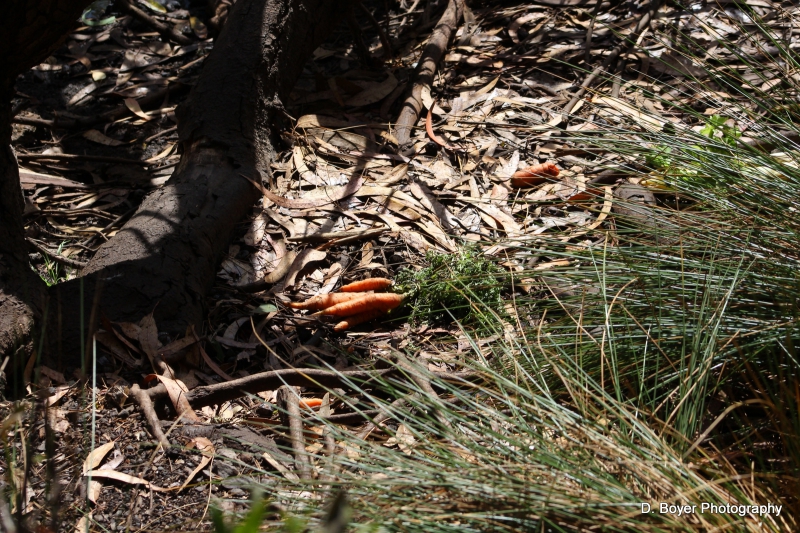 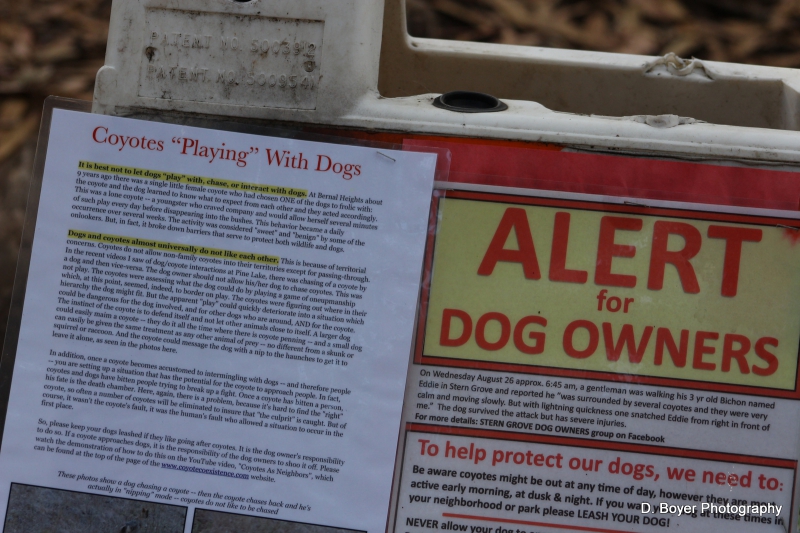 original image (1600x1067)
There has never been a case reported officially that suggests urban coyotes play with domestic dogs.
§Coyotes love to look down on their surroundings or environments.
by D. Boyer Sunday Oct 18th, 2015 8:59 AM 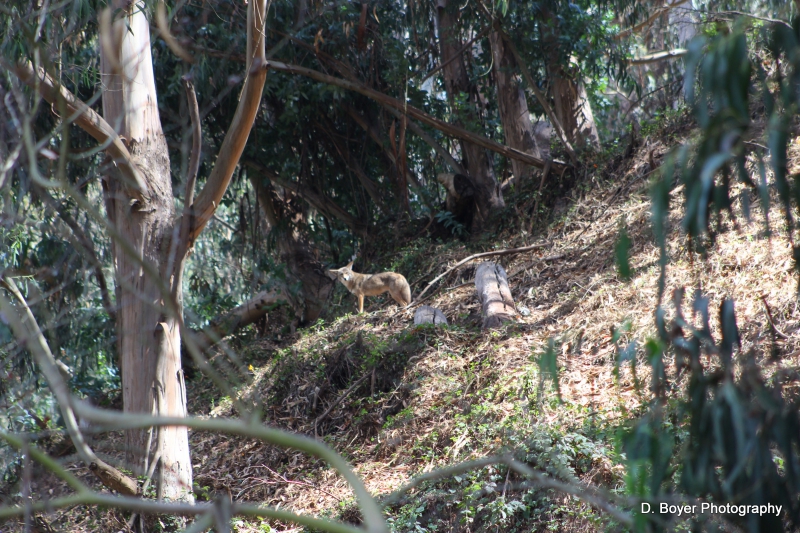 original image (1600x1067)
Add Your Comments
Support Independent Media
We are 100% volunteer and depend on your participation to sustain our efforts!