by Dan Bacher
Conflicts of interest abound in California politics; the appointment of an oil industry executive on October 9 and the dismissal of two key regulators by Jerry Brown in November 2011 because they failed to serve the oil industry's wishes are just just a few examples of how Big Oil, agribusiness and other corporate interests have captured the regulatory apparatus in Caifornia. 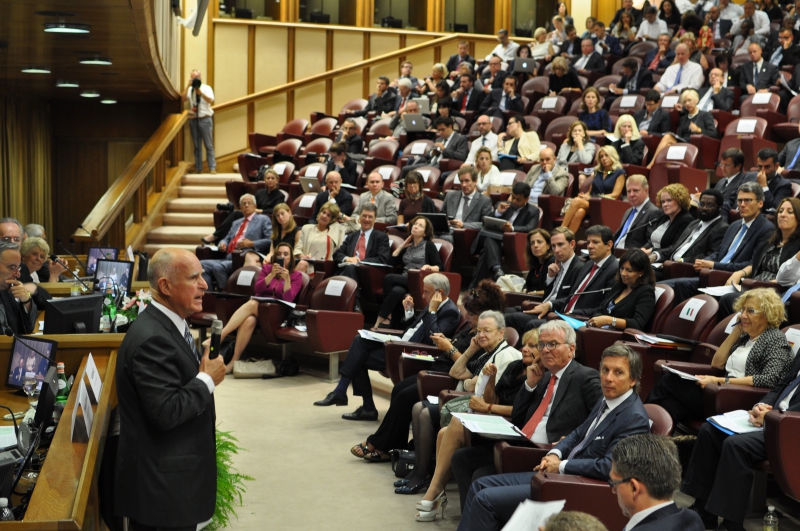 As advocates of Senate Bill 350 were celebrating the signing of the amended renewable energy bill by Governor Jerry Brown, a major appointment to a regulatory post in the Brown administration went largely unnoticed.

In a classic example of how Big Oil has captured the regulatory apparatus in California, Governor Jerry Brown announced the appointment of Bill Bartling, 61, of Bakersfield, who has worked as an oil industry executive and consultant, as district deputy for Bakersfield in the Division of Oil, Gas and Geothermal Resources (DOGGR) at the embattled California Department of Conservation. He supervises “oil and gas production, fresh water protection, enhanced recovery, underground injection control, production tank and pipeline integrity and the environmental protection programs.”

What are Bartling's qualifications? According to a statement from the Governor's Office:

"Bartling has been president at Aspectus Energy Consulting since 2015, where he was president from 2005 to 2008. He was general manager at OptaSense Borehole Imaging Services from 2014 to 2015, president and chief executive officer at SR2020 Inc. from 2008 to 2014 and founder and chief technology officer at Ambrose Oil and Gas from 2007 to 2010.

Bartling was senior director of market strategy at Silicon Graphics Inc. from 2000 to 2005, manager of technical computing at the Occidental Petroleum Corporation from 1998 to 2000 and senior vice president of software engineering at CogniSeis Development from 1996 to 1998.

He held several positions at the Chevron Corporation from 1981 to 1996, including supervisor for exploration, supervisor for production and research, geologist and geophysicist.

Bartling earned a Master of Science degree in geology from San Diego State University. This position does not require Senate confirmation and the compensation is $180,000. Bartling is a Republican."

Ironically, Brown made the controversial appointment on the same day that DOGGR, the state agency in charge of regulating the state's oil and gas industry, released a critical internal review documenting the poor job it has been doing. (ftp://ftp.consrv.ca.gov/pub/oil/Publications/SB%20855%20Report%2010-08-2015.pdf)

"Most of the transgressions were dealt with by sending the oil company a notice of violation," according to David Broder of AllGov California. "Critics of the chronically underfunded agency, which is in the California Department of Conservation, have complained for years that the regulators are too close to the industry." (http://www.allgov.com/usa/ca/news/appointments-and-resignations/brown-appoints-oil-executive-to-head-oil-oversight-office-151016)

The Center for Biological Diversity’s Hollin Kretzmann criticized the appointment, stating, “Governor Brown’s administration has shown a blatant disregard for the law, and time after time it has sacrificed California’s water and public health in favor of oil industry profits. Hiring an oil executive to run one of the state’s most captured agencies is completely inappropriate and only adds insult to injury.”

As the case on October 7, when Jerry Brown signed Senate Bill 350 at Griffith Park in Los Angeles, Brown continually attempts to depict himself as a "climate leader" and "green governor" at environmental conferences and photo opportunities across the globe.

However, court documents obtained by the Associated Press this summer in a RICO lawsuit by Central Valley farmers against the Brown administration document the claims by anti-fracking activists that the governor is collaborating with Big Oil on the expansion of extreme oil extraction techniques in California.

In these documents, two former senior level officials in the Department of Conservation in Governor Brown’s administration reveal that they were fired on November 3, 2011 after repeatedly warning the governor that oil drilling would imperil the state’s groundwater. (http://www.eastbayexpress.com/SevenDays/archives/2015/09/08/governor-brown-under-fire-for-axing-state-oil-regulators-and-pay-to-play-politics)

Conflicts of interest abound in California politics; the appointment of an oil industry executive on October 10 and the dismissal of two key regulators by Jerry Brown in November 2011 because they failed to serve the oil industry's wishes are just just a few examples of how Big Oil, agribusiness and other corporate interests have captured the regulatory apparatus in Caifornia. Other examples of regulatory capture include the following:

• State Senator Michael J. Rubio resigned in February 2013 to go work in a "government affairs" position for Chevron. Rubio, who was leading the charge to weaken the landmark California Environmental Quality Act (CEQA) and make it friendlier to corporations, claimed he resigned in order to spend more time with his family.

• In one of the most overt conflicts of interest in recent years, Catherine Reheis-Boyd, President of the Western States Petroleum Association (WSPA), served as Chair of the Marine Life Protection Act (MLPA Initiative Blue Ribbon Task Force to create so-called "marine protected areas" in Southern California from 2009 to 2012. She also sat on the the MLPA Initiative task forces for the Central Coast, North Central Coast and North Coast. (http://www.truth-out.org/speakout/item/30745-a-whale-of-a-conflict-of-interest-big-oil-lobbyist-s-oversight-of-marine-protected-areas)

• Johnny Amaral, Chief of Staff for Representative Devin Nunes, who represents California's 22nd Congressional District, joined the staff of the Westlands Water District as Deputy General Manager for External Affairs on May 1, 2015. Nunes is best known for sponsoring legislation to increase pumping Delta water to corporate agribusiness and to eviscerate Endangered Species Act protections for Central Valley salmon, Delta smelt and other species.

• Laura King Moon, a lobbyist for the state's water exporters, was appointed by Jerry Brown as Chief Deputy Director for the California Department of Water Resources (DWR) in September 2013. Before her appointment, she served as a project manager for the Bay Delta Conservation Plan while "on loan" from the State Water Contractors, as chief deputy director for Department of Water Resources.

The amending of SB 350 and defeat of other bills opposed by the oil industry and Governor Jerry Brown's support of the expansion of fracking in California show how Big Oil, along with agribusiness, the timber industry, developers and other corporate interests, has captured the regulatory apparatus in the state.
Add Your Comments
Latest Comments
Listed below are the latest comments about this post.
These comments are submitted anonymously by website visitors.
TITLE
AUTHOR
DATE
industry regulating the country
drew fenton
Support Independent Media
We are 100% volunteer and depend on your participation to sustain our efforts!