by Dan Bacher
Caleen Sisk, the Chief and Spiritual Leader of the Winnemem Wintu Tribe, spoke movingly about the sacredness of water and the threat to the environment and people posed by controversial plans to raise the Shasta Dam and build Jerry Brown's Delta Tunnels.

“This spring, the headwaters of the Sacramento, is sacred to us,” said Chief Sisk. “Archeologists once said they couldn’t find any evidence of indigenous people around this spring. That’s because our ancestors believe the site was so sacred that they would leave nothing behind when they prayed there. It is for the sacred beings – it is not for us to use.”

Photo: Chief Caleen Sisk speaks in front of the Crystal Geyser plant, not yet in operation, in Mount Shasta City. 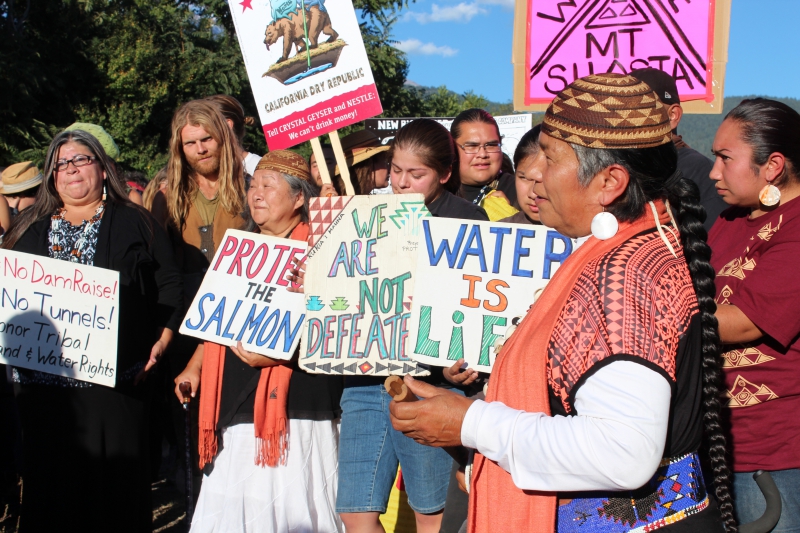 Small cascades of cold, pristine water rush out of the hillside at Big Springs, the headwaters of the Sacramento River, as they converge in a clear and shallow pool located in the Mount Shasta City Park.

Adults and children fill their jugs and bottles with the pristine water that takes 50 years to make it from snow and rain on Mount Shasta down through the volcanic aquifer to where the torrents converge in the park.

Even in a record drought year like this one, the icy water rushes from the hillside to make its way to Lake Siskiyou, then Lake Shasta and then to the Delta and the ocean. People from throughout the world walk along the creek and hike along shaded trails and footpaths that cross through hedges of horsetail fern and willow and across small bridges.

As people hiked to and relaxed besides Big Springs, Caleen Sisk, Chief and Spiritual Leader of the Winnemem Wintu Tribe, and hundreds of environmentalists and activists from all over California and Oregon held a rally, the “Water Every Drop Sacred” event, in this scenic park at the Sacramento River headwaters. After the rally ended, Sisk and tribal members led a march and protest of 160 people to the plant.

The Tribe is opposed to the planned opening of the plant, closed after it was operated by the Coca-Cola Bottling Company and other corporations for years, in accordance with its commitment to protect and preserve the Headwaters of the river, the Mount Shasta watershed and sacred tribal lands.

Performances by Sawako Ama, Rieko Ivaska and Mao highlighted the fact that Japanese residents and tourists are not pleased about the plans to open another bottling plant just 2000 feet from the headwaters, according to Vicki Gold, of Water Flows Free in a news release.

"Crystal Geyser is already entrenched in Weed, CA, just 8 miles north of Mt. Shasta, reportedly extracting 1.5 million gallons of water daily, much of it headed for Japan in single use plastic bottles with a huge carbon footprint," said Gold. "Meanwhile, Japan has abundant water of its own."

Chief Caleen Sisk, the keynote speaker, spoke movingly about the sacredness of water and the threat to the environment and people posed by controversial plans to raise the Shasta Dam and build Jerry Brown's Delta Tunnels.

“This spring, the headwaters of the Sacramento, is sacred to us,” said Chief Sisk. “Archeologists once said they couldn’t find any evidence of indigenous people around this spring. That’s because our ancestors believe the site was so sacred that they would leave nothing behind when they prayed there. It is for the sacred beings – it is not for us to use.”

“Mount Shasta (where the Sacramento and McCloud and other rivers come from) is sacred. The sacred being brings us a message that the plant can’t be here. And if we’re not successful here, the mountain may take care of it instead," emphasized Sisk.

She emphasized that the pending plan to open the Crystal Geyser plant in Mount Shasta is part of a large water grab by corporate interests, including the federal plan to raise Shasta Dam and the Brown administration scheme to shop water to agribusiness interests and Southern California water agencies.

“The twin tunnels will be built to transfer water from the headwaters to agribusiness farming in a desert. They are large enough to divert the entire Sacramento River in them," said Chief Sisk.

She said that if the tunnels were built it would destroy the largest estuary on the West Cost of the Americas, a nursery for Chinook salmon, steelhead, green and white sturgeon, Delta and longfin smelt and numerous other fish species.

“If they kill the estuary, what will it mean? When the estuary is cut off from the fresh water, the estuary will disappear and no longer be a nursery," said Chief Sisk.

Sisk also discussed the Tribe’s long struggle to bring the original run of winter run Chinook salmon back to the McCloud River above Shasta Dam. Sisk and Tribal Members journeyed to New Zealand in 2009 to conduct ceremonies with the Maori on the Rakaira River, where the descendents of the original winter run chinook salmon from the McCloud, transplanted from the Livingston Stone Fish hatchery over 100 years ago, now thrive.

“The Maori are ready – they said they have 400,000 eyed eggs ready to be planted in the McCloud…But the scientists from the Bureau of Reclamation said they are not sure whether these are the same fish because they have no DNA from the McCloud River winter Chinooks to match the DNA of the New Zealand fish. Yet all of the records show that these fish came from this river!"

When the march arrived at the plant, Sisk appealed to Otsuka Pharmaceuticals in Japan to reconsider their plans and not open the facility. She also suggested that opponents of the plant make a trip to Japan to convince the company's owners to not open the plant in a manner similar to how members of the Hoopa Valley, Yurok and Karuk Tribes went to Scotland to convince Scottish Power, the owner of the Klamath River Dams, to decommission the dams in order to restore fish to the headwaters.

Gold estimated that 500 people attended the event throughout the day, with 200 present at any one time.

The speakers addressed the threats posed to our food sources, potable water supply, and ecosystem posed by water bottling and other water commodification schemes.

In addition to rallying against Crystal Geyser’s pending plant in Mt. Shasta, speakers at the event discussed their opposition to Calpine’s proposed industrial geothermal plant in the Medicine Lake Highlands that the Pit River Tribe has been fighting for many years. Both of these industrial developments threaten water quantity and quality in the area and have been the target of grassroots campaigns.

Lucas RossMerz, of Sacramento River Preservation Trust, addressed the importance of keeping the water in the river to all those who use it for recreation, residential use and farming.

He cited the aphorism, “I have Pessimism of the intellect and optimism of the will,” as his philosophy in addressing the many problems of the Sacramento River watershed.

“No matter how bad the numbers of fish and habitat get, my heart won’t let me quit," he said. "So I show up to work every day and do my best!”

Reverend Amanda Ford, M.A., of the Environmental Justice Coalition for Water, who addressed human rights issues surrounding water, told the story about how she found Crystal Geyser bottled water in her mom's refigerator when she went home to Michigan recently. "Our message has to reach people like my mom, who view water as as a commodity," Ford said.

Mauro Oliveira, of SOL Communications, emphasized, "The Sierra Nevada and Mount Shasta snowpacks are the lowest in 500 years. Our mission is to protect our water, our watersheds, oceans, all beings and their habitat. The oceans, rivers and all life forms are suffering from plastic pollution and consequent endocrine disruption. We have to change our habits and question every action of polluting industry.”

Gold pointed out the importance of people uniting to stop the opening of the Crystal Geyser plant.

"It's time to join forces in an alliance to protect our local water," she said. "We must continue to put pressure on Crystal Geyser, Siskiyou County Board of Supervisors, the City Council of Mt. Shasta and other public agencies. We are making a stand here, now, on Mount Shasta."

"Our friends in Oregon at Cascade Locks are facing Nestle; British Columbia is facing new exploitation by Nestle," Gold explained. "The plastic pollution is choking our oceans, our landfills, our rivers. Single use plastic water bottles is an idea whose time has clearly passed. Boycott bottled water."

"We must vote with our pocket books. This is time for the voice of the public, speaking for our fragile planetary ecosystem, to be heard," she concluded.

On September 16, Crystal Geyser, through their PR Firm, Burson-Marsteller, stated it will comply with the EIR process.

"However, EIR’s don’t always present the entire picture of the effects of an industry's environmental impact,” said Gold. “Our event shed light on the issues of water bottling overall, plastic waste resulting from bottling, the overall effects and impact on the environment, and the irrationality of bottling water during the time of the worst drought in California’s history.”

The event was organized by Vicki Gold of Water Flows Free and the Environmental Justice Coalition for Water and sponsored by the Mount Shasta Bioregional Ecology Center. 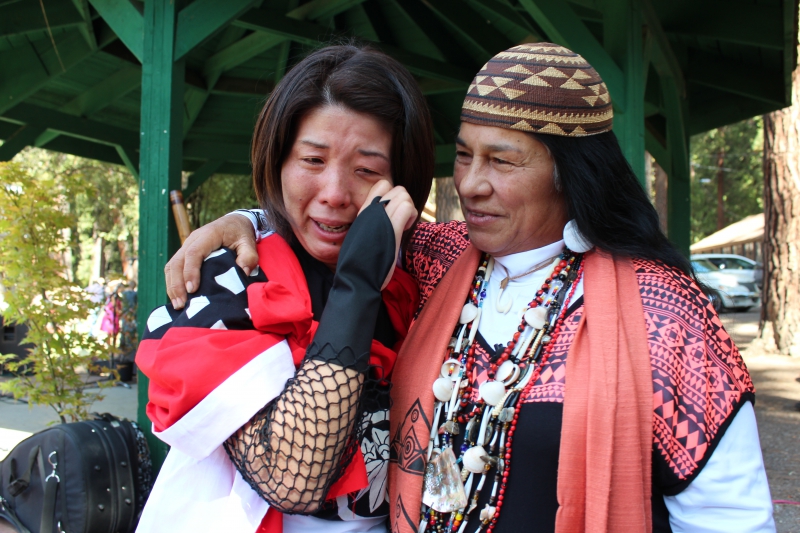 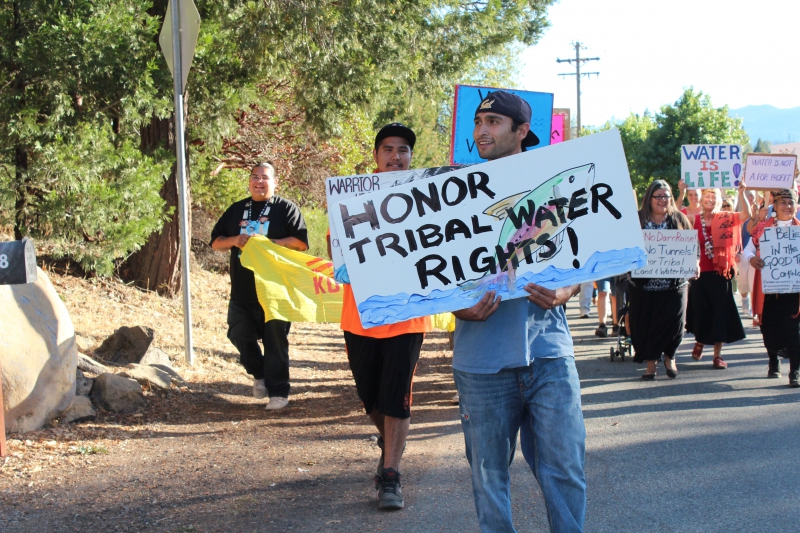 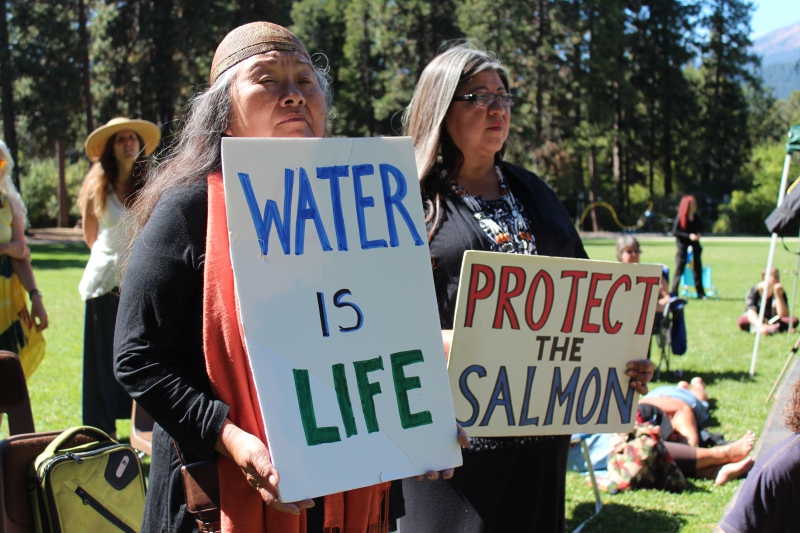 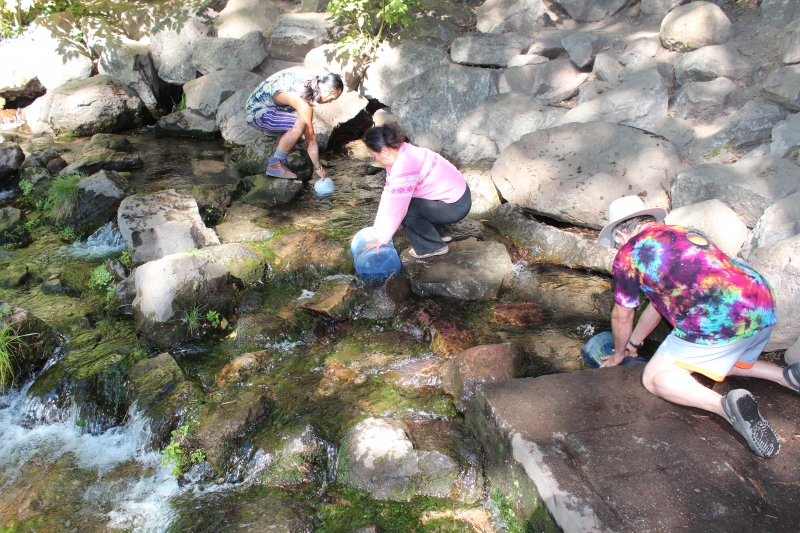 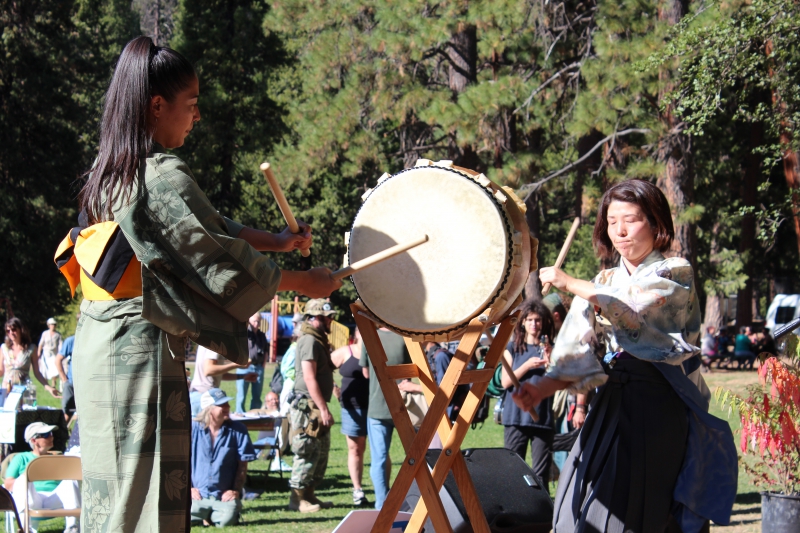 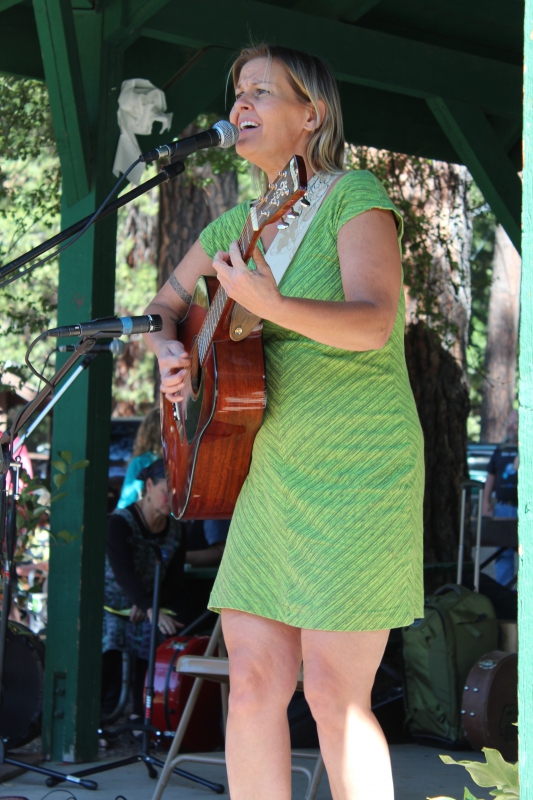 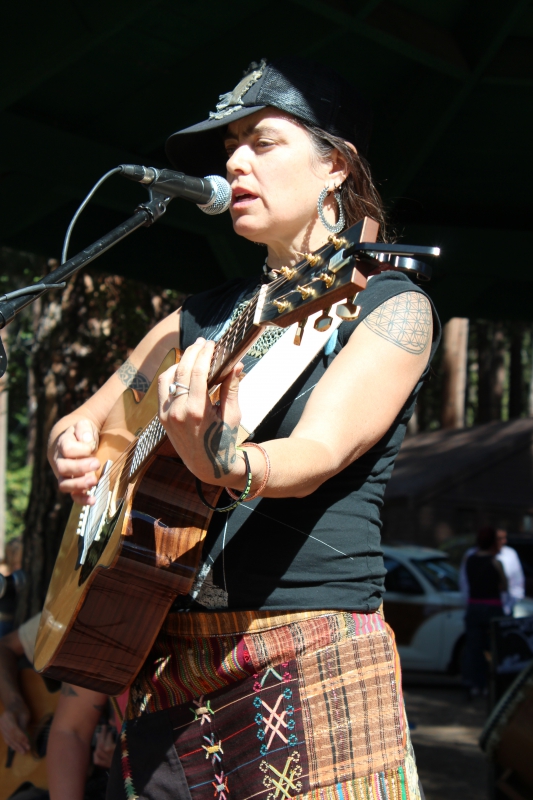 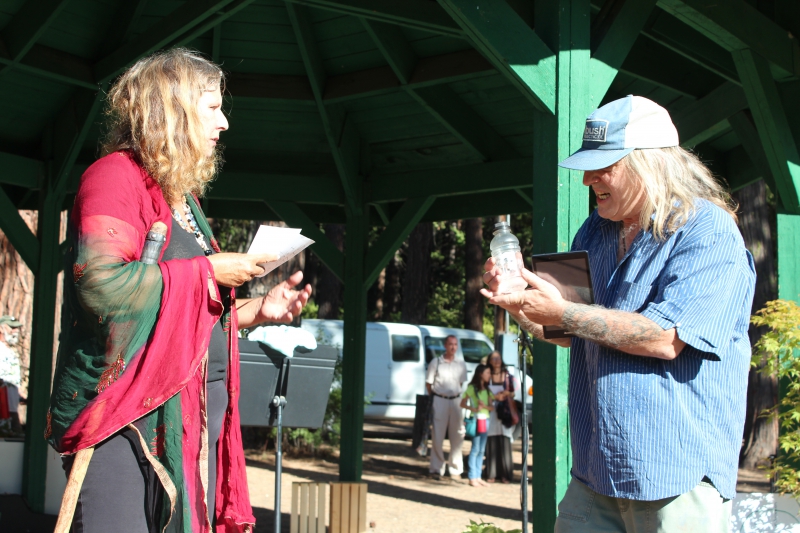 original image (5184x3456)
Art and Revolution came from Sacramento to perform at the event. Photo by Dan Bacher.
§Lucas RossMerz
by Dan Bacher 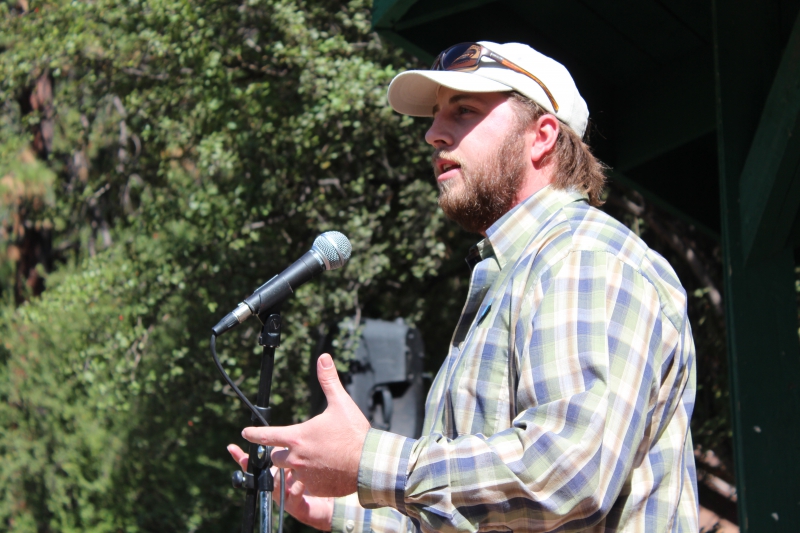 original image (5184x3456)
Lucas RossMerz, of the Sacramento River Preservation Trust, said, “No matter how bad the numbers of fish and habitat get, my heart won’t let me quit." Photo by Dan Bacher.
§Reverend Amanda Ford
by Dan Bacher 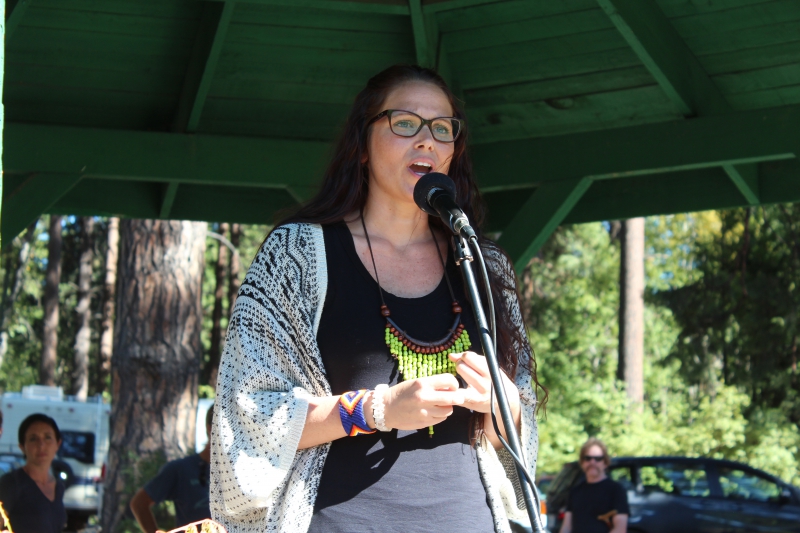 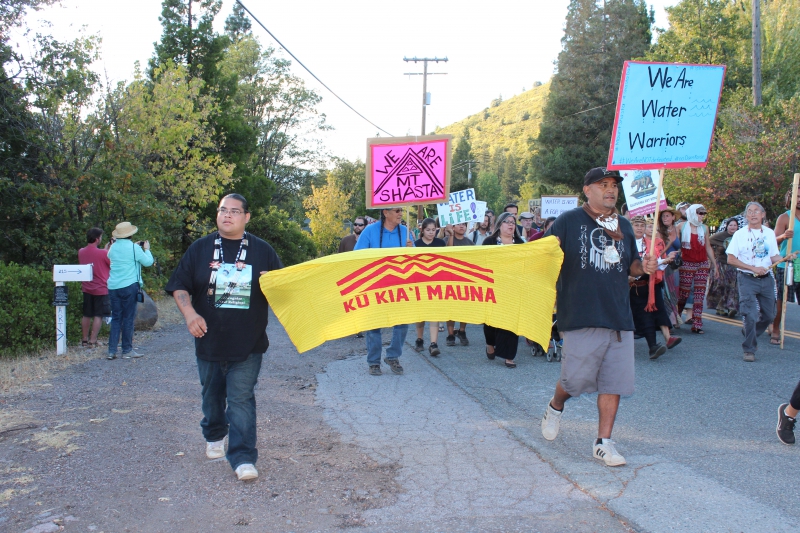 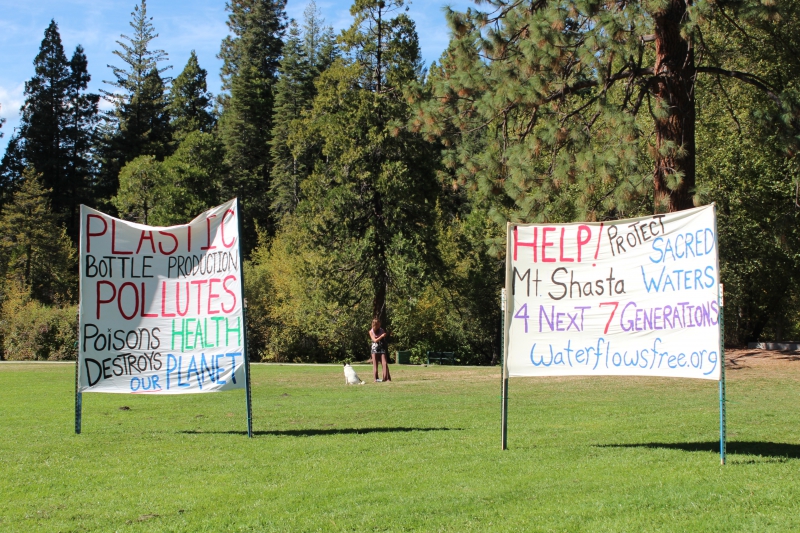 original image (5184x3456)
Signs in the the park during the rally. Photo by Dan Bacher.
§Caleen speaks at rally
by Dan Bacher 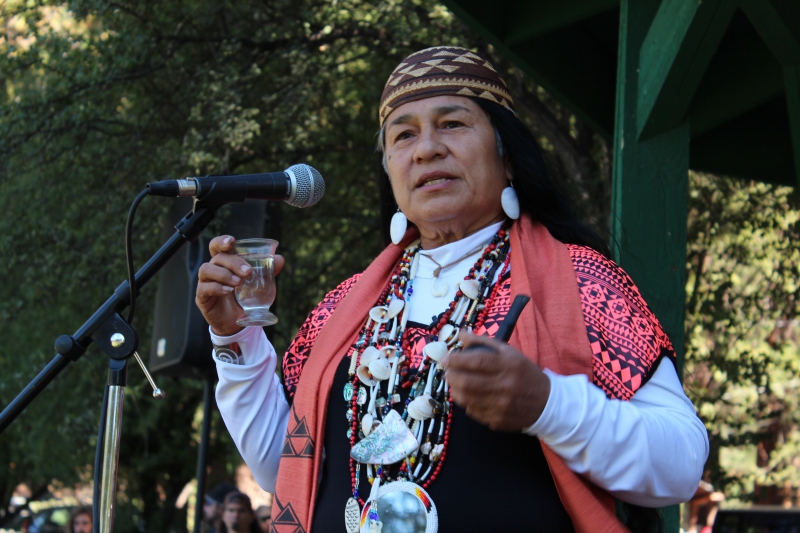 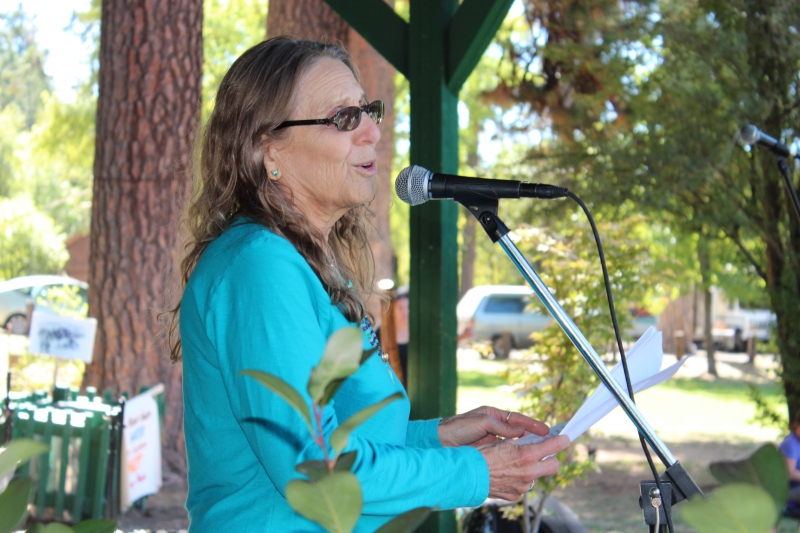 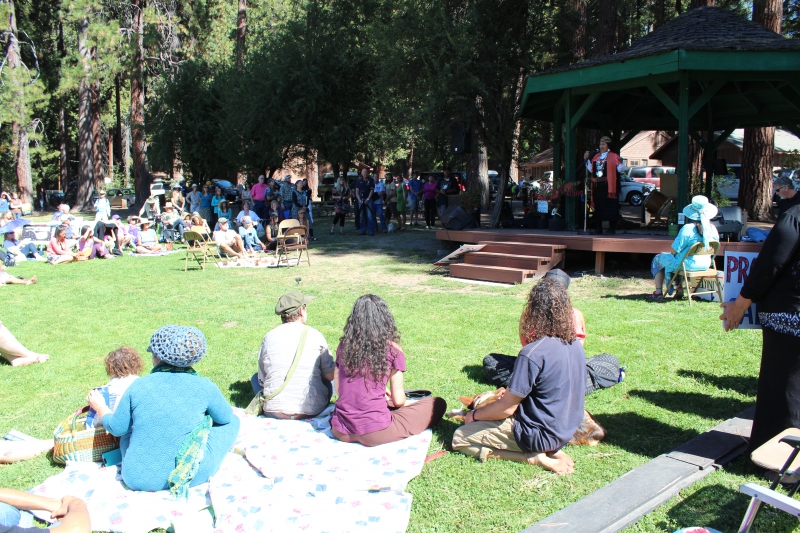 original image (5184x3456)
The crowd listens to Chief Sisk speak. Photo by Dan Bacher.
§In front of the plant
by Dan Bacher 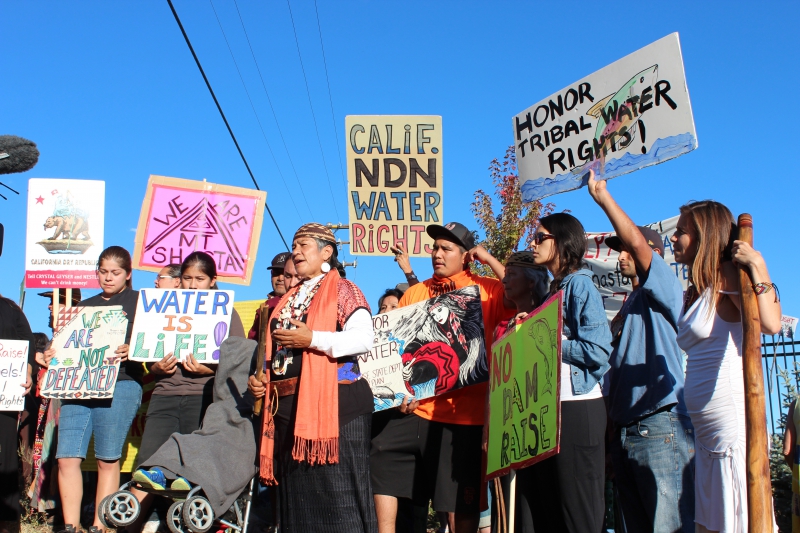 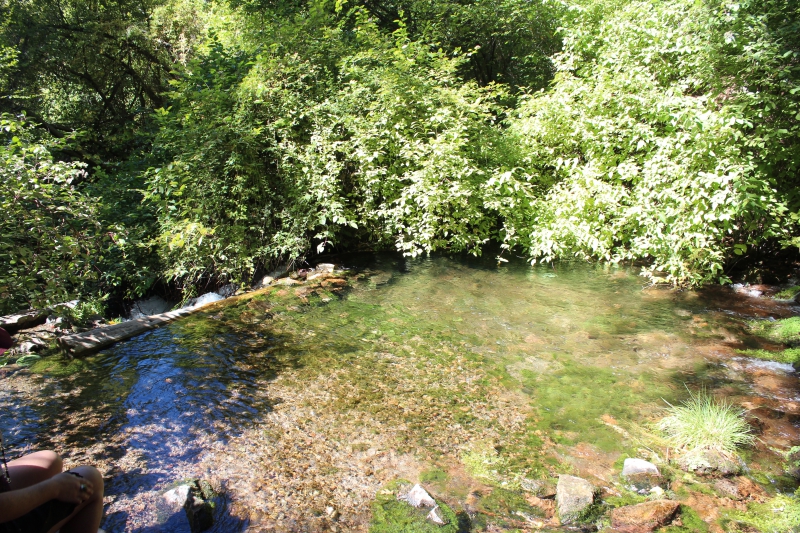 original image (5184x3456)
Big Springs Creek just downstream of where the spring water pours out of the rock.
Add Your Comments
Latest Comments
Listed below are the latest comments about this post.
These comments are submitted anonymously by website visitors.
TITLE
AUTHOR
DATE
yall could probably study the neggative impact of merceds case
water
Ideology of Mythology
Beeline
Support Independent Media
We are 100% volunteer and depend on your participation to sustain our efforts!