At least six independent groups and political coalitions have announced plans to stage protests at the SAP Center arena in San Jose and at some high-profile tech companies that Indian Prime Minister Narendra Modi plans to visit. These include the Alliance for Justice and Accountability (AJA), Sikhs for Justice (SFJ), and the Organization for Minorities of India (OFMI). Scores of buses from across California are set to converge on SAP Center, bringing what is expected to be thousands of protesters with a wide range of grievances against the Prime Minister.

AJA's #ModiFail campaign, for example, aims to educate Silicon Valley on the threat to India’s democracy and diversity being posed by Prime Minister Modi. SFJ opposes the Bharatiya Janata Party's "saffronization" efforts, while continuing to seek redress for the massacre of Sikhs in and around Delhi in 1984. OFMI demands equal protection and opportunities for all minority communities and lower castes.

Mr. Modi is coming to Silicon Valley with plans to visit Facebook, Google, Tesla, and Adobe to advance his Digital India campaign seeking their big dollar investments in India. Then he will be hosted at the SAP Center in San Jose, as part of his global campaign to promote his image among the sizable Indian community in the Bay Area.

But many of his long-time observers have remarked that, "At the same time, he defends his BJP's narrow vision of the wealthy class, exclusivist Hindu nationalism that actively exploits the religion of majority Hindus to marginalize minority communities, lower caste Hindus, and the poor, and to dilute civil liberties."

India’s celebrated values of pluralism and tolerance are under severe attack since Mr. Modi assumed office as Prime Minister. According to the Modi government’s sources, attacks against religious minorities are up 25% since last year. Some of his own ministers are engaged in a malicious hate campaign against Christians and Muslims.

Narendra Modi speaks eloquently of Digital India, but Indian media has reported that many individuals who have spoken against Modi or his peers on Facebook, WhatsApp, and other social media sites have repeatedly faced arrests and have been hounded by national security agencies with investigation on trumped-up charges. The Indian government is implementing new rules limiting encryption and forcing all users to hand over encryption keys to the government. This is in direct opposition to the open internet and privacy concerns advocated by the Silicon Valley tech community.

Modi’s administration has launched measures to dismantle civil society institutions. According to Firstpost, Modi blocked funding for over 13,000 NGOs, including Greenpeace, the Sierra Club, 350.org, the Ford Foundation, and Cordaid. The Modi administration specifically targets human rights activists, environmentalists and whistle-blowers seeking justice for victims of violence and activists seeking protection of India's ecology and natural resources like rivers and forests.

Women’s rights initiatives have also suffered a huge setback as funding for women’s and children’s programs has been cut by half. Indian women have been shocked to hear Modi’s ministers and party members continue to justify rape — in some cases blaming the women victims for inviting rapes with the kind of clothes they wear. In many instances under Modi, the police have refused to take action against those who have committed rape against women belonging to lower Hindu castes and religious minorities.

Prominent human rights activists and activists like Teesta Setalvad (Sabrang) and Meera Pillai (Greenpeace) have been harassed with investigations by government agencies and threats of arrest by police, despite the courts disagreeing with those charges against them.

A large number of small farmers throughout the country are in desperate financial condition due to the failure of their crops and complications introduced by promotion of genetically-modified seeds. Farmer suicides continue to mount with the cumulative total now approaching a staggering 300,000, with 60,000 in Maharashtra state alone. A strong farmers' movement is holding rallies on this issue nationwide but Prime Minister Modi continues to ignore it.

The Modi administration has pressed Parliament for over a year to pass the draconian Land Acquisition Act that would have forced millions of small farmers across India to surrender their lands at low rates. The Modi government had planned to give this land to wealthy industrialists to build factories. Poor small farmers would lose their only means of livelihood. Only massive public opposition has stopped this legislation from becoming law.

Chief ministers of at least two major states (Rajasthan and Madhya Pradesh) ruled by Modi's BJP, and a few senior ministers in his cabinet are deeply involved in major corruption schemes, most notably the money-laundering and bribery scams of Lalit Modi, a rogue businessman, and a scam of bribes for admissions into medical colleges. Prime Minister Modi has refused to address these serious corruption issues, let alone take any action against the corrupt officials, despite nationwide demands by many activists for over 3 months now.

Zuckerberg, in particular, has been deluged with letters at the weekend expressing disappointment at his announced decision to welcome Modi to Facebook. Each letter includes a bottle of Purell hand sanitizer "to cleanse your hands after shaking the blood soaked hands of Prime Minister Modi." This is a reference to Modi's role in inciting the Gujarat riots in which over 2,000 Muslims were killed by raging Hindu mobs in 2002 while he was Chief Minister of the state. For this Modi had been banned from entering the U.S. over a 10-year period.

AJA, SFJ, OFMI, and numerous other groups are organizing protests on September 27 outside the SAP Center (North Autumn and Santa Clara Streets) in San Jose beginning at 2 pm. Over 40,000 attendees are expected -- far more than the 17,500 seats in the SAP Center -- and they are expected to be greeted by thousands of protesters. According to organizers, "The protests will be held in safe permitted free speech areas to tell the other side of the story."
http://modifail.com
§To Mark Zuckerberg: "cleanse your hands"
by Sharat G. Lin and Kaleem Kawaja Saturday Sep 26th, 2015 9:00 PM 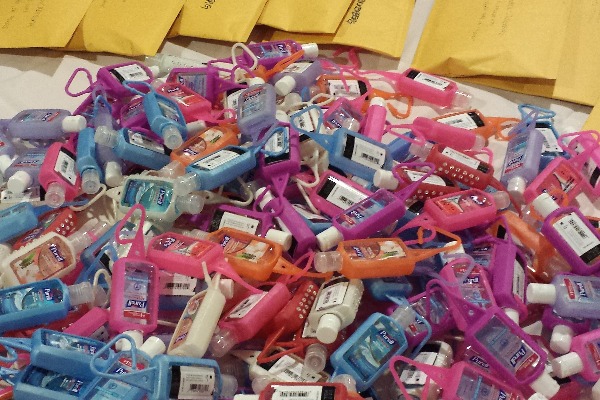 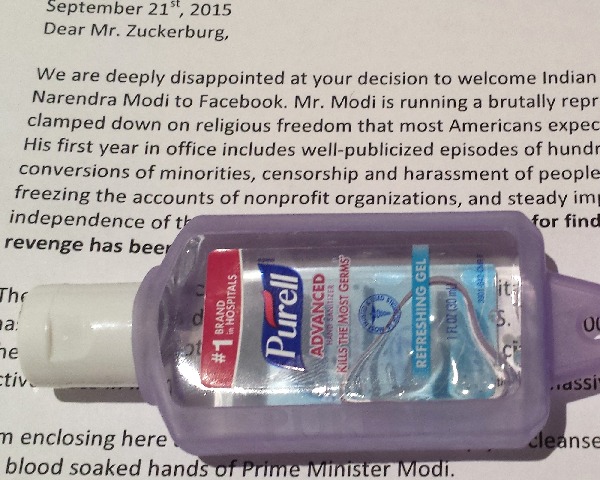 One of hundreds of letters received by Mark Zuckerberg suggesting that he cleanse his hands with Purell "after shaking the blood soaked hands of Prime Minister Modi."
http://modifail.com
§Bulletin Board: #ModiFail
by Sharat G. Lin and Kaleem Kawaja Saturday Sep 26th, 2015 9:00 PM

Roadside digital bulletin board carrying an advertisement by the Alliance for Justice and Accountability.
http://modifail.com
§Report: One Year Under Modi
by Sharat G. Lin and Kaleem Kawaja Saturday Sep 26th, 2015 9:00 PM 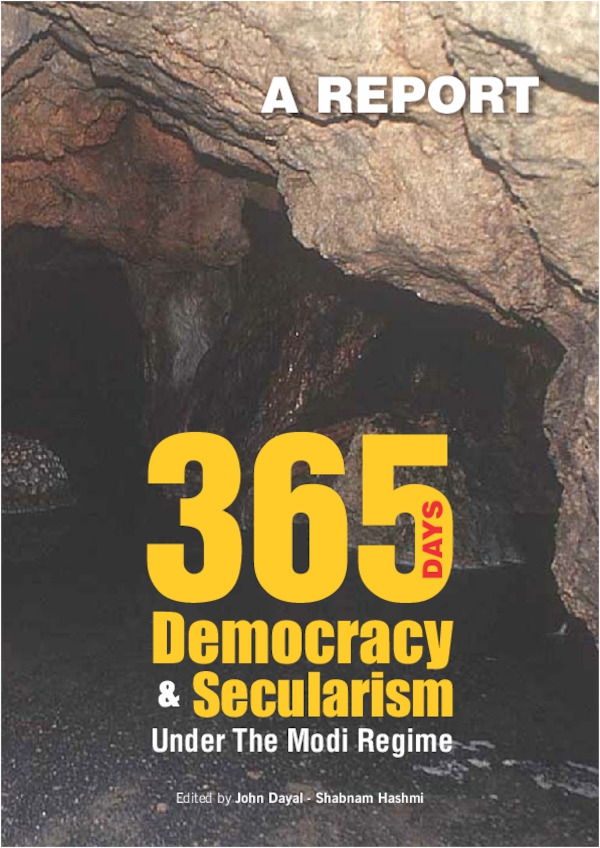 Download PDF (1.9MB)
Read the ANHAD report on Indian Prime Minister Narendra Modi's first year in office -- 365 Days: Democracy and Secularism Under the Modi Regime.
http://modifail.com
Add Your Comments
Support Independent Media
We are 100% volunteer and depend on your participation to sustain our efforts!