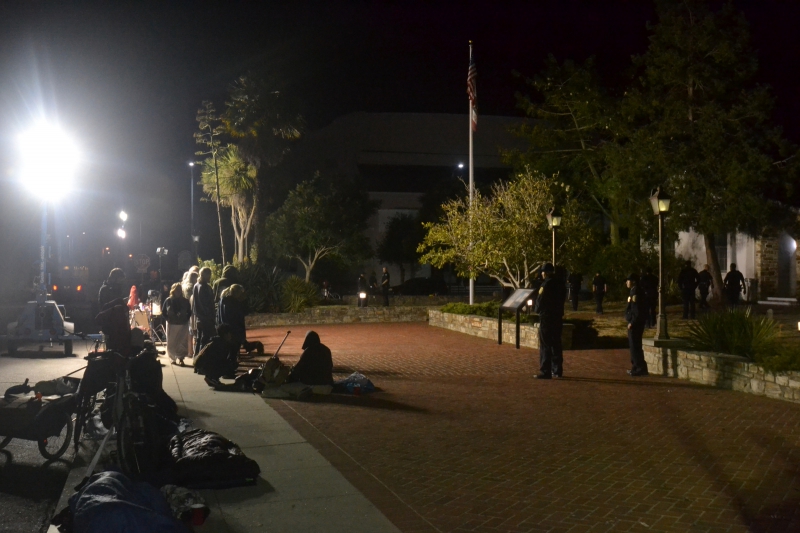 original image (1600x1067)
Another sleepout protest at Santa Cruz city hall occurred this past Tuesday evening. Protesters have now spent 11 nights sleeping out in the open at city hall, in order to protest and draw attention to the Santa Cruz law which makes camping out in public or in one’s vehicle a citable offense. The law - which has been on the books in Santa Cruz since 1978 - has been criticized by protesters as unfairly targeting houseless people in the city who have no choice other than to sleep outdoors. The last Point in Time count - a nationally used method of surveying unhoused people - in the county registered 1964 individuals, far more than the 1172 shelter beds available to them.

The sleepouts have regularly been visited by officers of the Santa Cruz police department, who arrived this past Tuesday evening around 11:00 pm. This week the police only wrote one citation, for a houseless protester found asleep beneath the city hall flagpole. The plaza area of city hall that faces Center street is designated by the city’s Parks and Recreation department as a park, only open from 6:00 am until 10:00 pm each day. Police have generally cited people present in the city hall plaza after 10:00 pm for being in the park after hours. The brick walkways that lead from the sidewalk into the plaza and toward the City Council chambers are also designated as part of the park. Protest organizers have pointed out that closing these walkways after hours along with the rest of the park designated area essentially makes it illegal for people to visit city hall after 10:00 pm, even to do something as simple as check posted agendas for city council meetings.

Some recently added fixtures at the protests include an array of light towers of the kind commonly seen at late night construction sites. These towers, supplied by local tool equipment rental service A-Tool Shed, carry 4 high-powered bulbs lit by a rumbling diesel generator. These lights have been present now at four sleepouts. Accompanying the lights this Tuesday were three security guards from Bay Area private security firm First Alarm, who have also been present since the lights were first at city hall. According to the guards, First Alarm was hired to protect the lights. When questioned further, one guard indicated that the lights are provided by the Santa Cruz police department. Protesters charge that the lights are a method by which the police department tries to harass them and prevent them from sleeping. One of their signs takes a militant stance on the issue, stating “Sleep deprivation is a form of torture!” in reference to the lights. The sign also refers to the police practice of waking houseless sleepers in the city to cite them under the camping ban.

Police started the lights up this Tuesday night just as they arrived, flooding the city hall plaza with light like at a movie shoot. Protesters formed a line along the sidewalk just the other side of the park zone to avoid tickets, while police stood in clusters in the plaza as they waited for their colleague to complete his ticket. They left soon after he finished.

The protest continued quietly until the early morning, when the police returned at about 5:40 am to inform sleepers on the sidewalk around City Hall that a pressure washer was coming through to clean the concrete. The protesters, roused from sleep, groggily collected their bedding and belongings and stood around for a few minutes until the plaza opened at 6:00 am, then relocated to the grass in the plaza center. Notably, the pressure washer did not arrive to clean the front sidewalk until more than 2 hours later.

A topic this reporter has heard consistently discussed at sleepouts is the cost of enforcing against the protests, both for police and private security. A phone call to A-Tool Shed found out that each light costs $125 per day plus diesel fuel costs, based on an 8 hour shift. A hiring ad for First Alarm found on craigslist.com stated that guards make between $11 and $18 per hour, for an average of $14.50 (for convenience of calculation). First Alarm guards have been present at the protests from 4:00 pm on Tuesday afternoons until 8:00 am on Wednesday mornings, for two 8 hour shifts. With this information, one can determine that the city of Santa Cruz has spent over $1000 each Tuesday for the past four Tuesdays (including this week) just to keep lights and First Alarm guards present.
§organizer Abbi Samuels explains protest to newcomers
by ZH Friday Sep 25th, 2015 12:27 AM 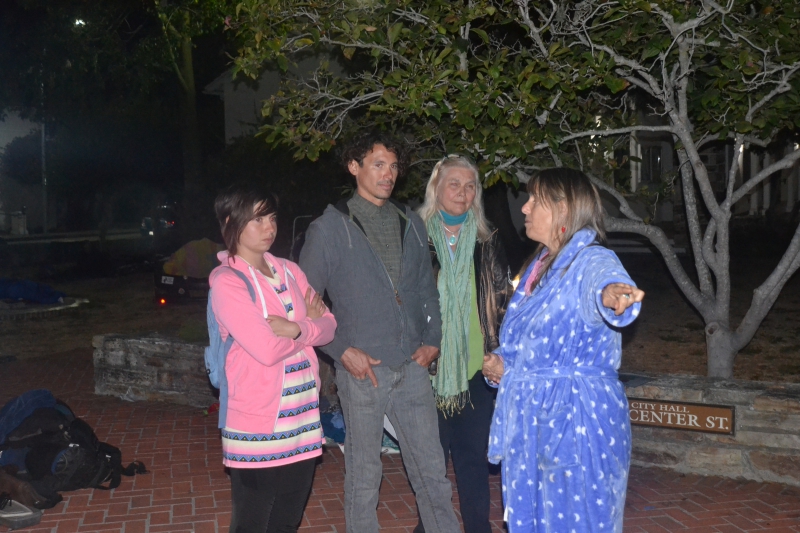 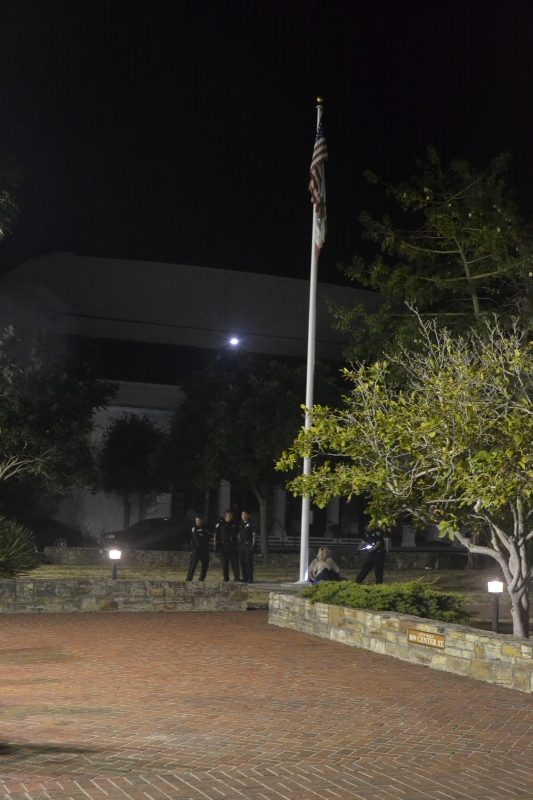 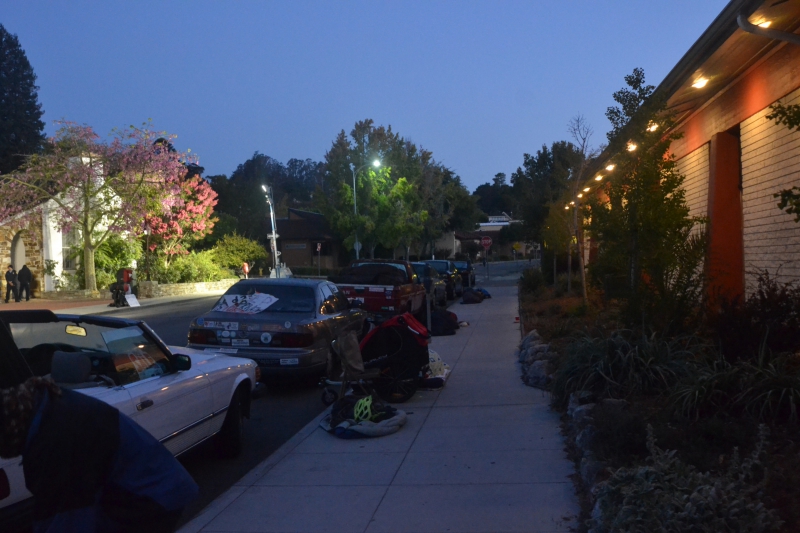 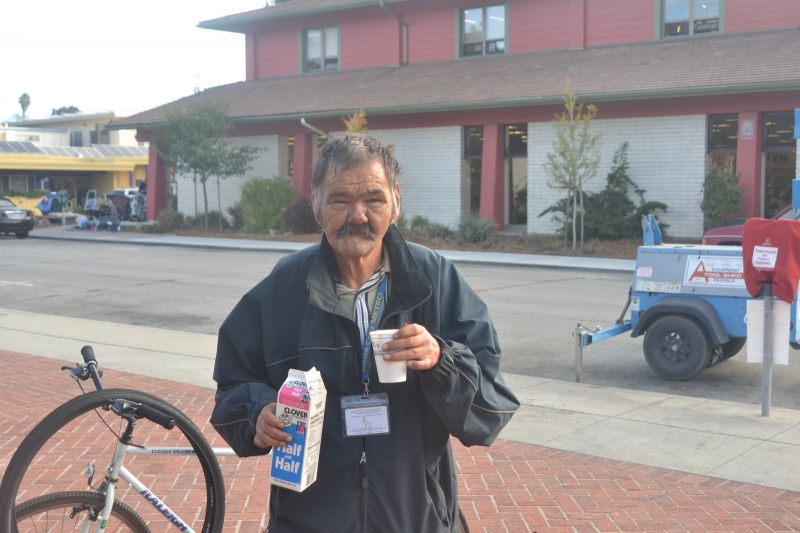 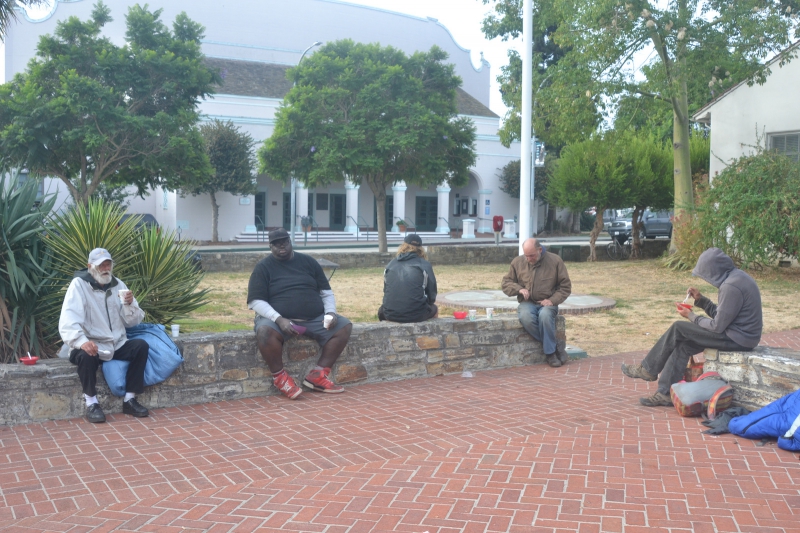 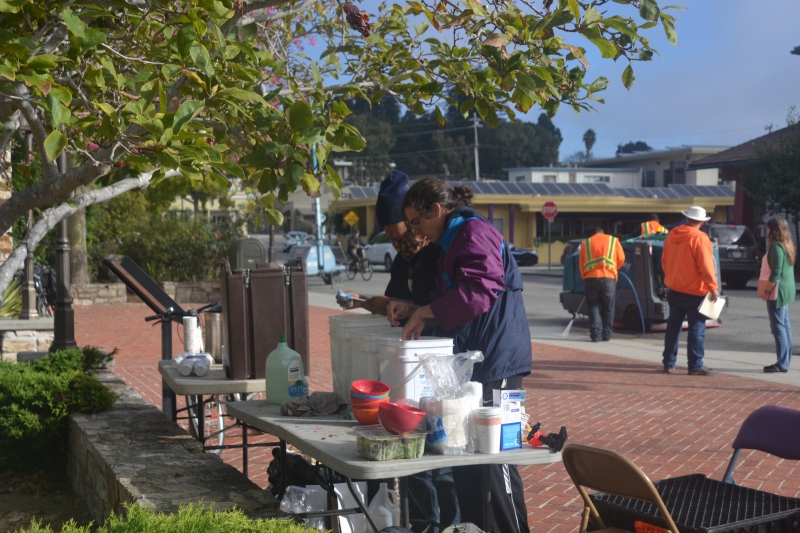 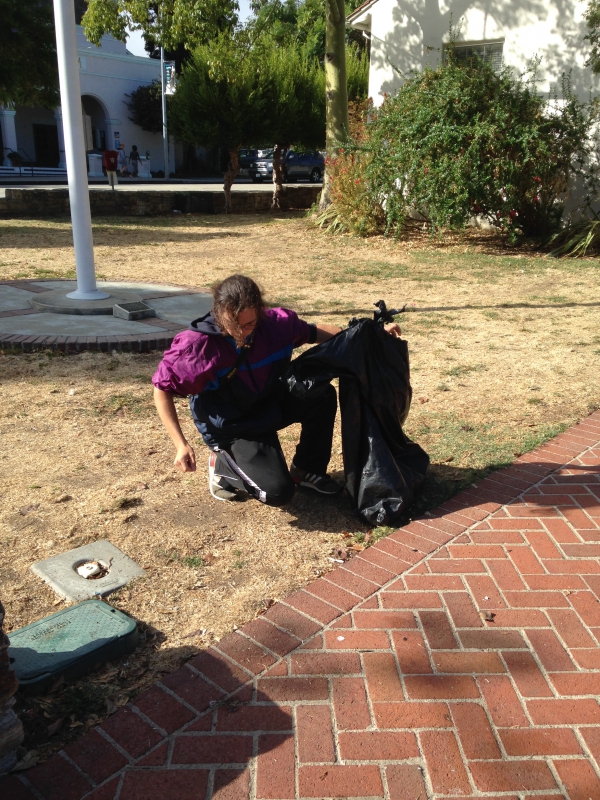 original image (2448x3264)
Add Your Comments
LATEST COMMENTS ABOUT THIS ARTICLE
Listed below are the latest comments about this post.
These comments are submitted anonymously by website visitors.