Add an Event
Newswire
Calendar
Features
Home
Donate
From the Open-Publishing Calendar
From the Open-Publishing Newswire
Indybay Feature
Publish to Newswire
Add an Event
Related Categories: Santa Cruz Indymedia | Racial Justice
Amah Mutsun Tribe Sends Sixth Letter to Pope Francis Opposing Canonization of Serra
by via Amah Mutsun Tribal Band
Monday Sep 21st, 2015 10:50 AM
In a letter to Pope Francis outlining the reasons the Amah Mutson people oppose the canonization of Junipero Serra, Tribal Chairman Valentin Lopez says “Undoubtedly what puzzles and hurts us most is how the Catholic Church has ignored the humanity of our ancestors.” 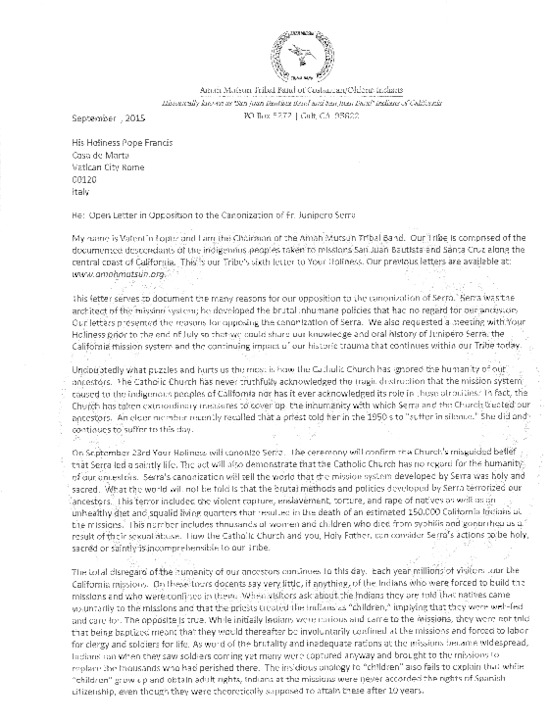 
The Amah Mutsun Tribal Band currently has an enrolled membership of nearly 600 BIA documented Indians. These are the Previously Recognized Tribal group listed by the Indian Service Bureau (now known as the Bureau of Indian Affairs) as the “San Juan Band.” All lineages comprising the “Amah Mutsun Tribal Band” are the direct descendents of the aboriginal Tribal groups whose villages and territories fell under the sphere of influence of Missions San Juan Bautista (Mutsun) and Santa Cruz (Awaswas) during the late 18th, 19th and early 20th centuries.

As a result of the Congressional Appropriation Acts of 1906 and 1908 our Tribe came under the legal jurisdiction of the Indian Service Bureau (BIA), and the Reno and Sacramento Indian Agencies until 1927. Our Tribe was never terminated by any Act or intent of the Congress, however, we remained a landless Tribe since our Federally Acknowledged status began in 1906. As a result of the Congressional California Indian Jurisdictional Act of 1928, both living members and direct ancestors enrolled with the BIA between 1930 and 1932. Our members also enrolled between 1948 to 1955 and during the third enrollment period between 1968 to 1970.

Our Tribe is currently listed with the Department of Interior, Bureau of Indian Affairs as Petitioner #120 as we are seeking status clarification to have our Recognized status restored by the Secretary of the Interior.
Add Your Comments
Support Independent Media
We are 100% volunteer and depend on your participation to sustain our efforts!