Add an Event
Newswire
Calendar
Features
Home
Donate
From the Open-Publishing Calendar
From the Open-Publishing Newswire
Indybay Feature
Publish to Newswire
Add an Event
Related Categories: International | Anti-War
21 Categories Of The Criminal Record Of Jeb Bush
by Truth
Thursday Sep 17th, 2015 4:09 PM
Jeb Bush is one of 6 executing Republican governors running for the presidency. He helped his father and brother in a criminal conspiracy to steal the election from Al Gore. He therefore is one of those responsible for 2 of 3 Bush wars. 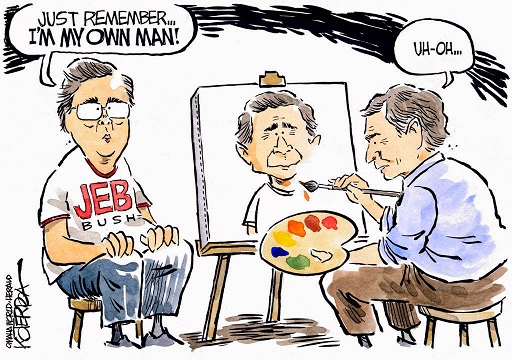 On June 15, Jeb Bush announced he is running for the US presidency. His father and his brother have started THREE wars: the first Gulf war, the socalled Desert Storm, and the war in Afghanistan, now the longest war in US history. These 3 wars have killed millions, injured millions more, destroyed fragile environments, and have virtually bankrupted the US, penalizing the poor as Trillions of dollars have been spent on arms, geometrically multiplying veterans' injuries etc. These wars have meant declining health care, library shut downs, students financially shut out of higher education, banks running amok etc. Rand Paul has the only antiwar record of the 16 Republicans expected to run for the presidency.

Jeb Bush was a coconspirator in the theft of the 2000 election from the citizens of the US.
He was supervisor of the removal of untold hundreds of thousands illegally from the voting rolls, under the guise that they were felons. He was the man who directed that policemen be in black and Hispanic neighborhoods shutting off roads leading to the polls. Jeb Bush was in charge of the decision of the Jacksonville metropolitan paper's decision to spread disinformation about the ballot in black neighborhoods. A special edition of the Florida Times-Union was published and distributed in black neighborhoods, with false instructions. Twenty thousand ballots in Jacksonville were disqualified because of this. In addition there were robocalls telling blacks they could vote through Nov 7, Wednesday.
Not all the ballots were counted in the 2012 election on November 8th, an election in which Miami residents, many, were kept waiting til ONE AM to vote.
Because of his colossal crime, the war in Iraq by G H W Bush was again instituted and euphemistically
called Desert Storm. Because of his felonious action, the war in Afghanistan was begun by his brother. He is therefore a cocreator of TWO wars in Afghanistan and Iraq.

Jeb Bush's father G H W Bush conducted a secret attack on William Colby, CIA director, because Colby had revealed to the Senate past CIA assassinations of foreign leaders etc. Bush's reward was to be named director of the CIA, a position he held for 1 year. Jeb Bush's brother George through an executive order ratified the kidnappings and torture conducted by the CIA. The euphemistic term for the barbarism was 'rendition'. 23 CIA operatives were convicted by the Italian government.

Jeb Bush has made bellicose statements about the Ukraine and has promoted once again expanding US government military in Iraq. According to the Washington Post, 19 of Jeb Bush's campaign advisers are holdovers from Bush 1 and Bush 2, and even as far back as the Reagan administration.

Like his brother George, Jeb Bush was governor of 1 of the last 7 states involved in execution. Because Jeb Bush did not prevent the execution of a man named Diaz, the man had several inches of chemical burns on his right and left arms. Altogether, he turned thumbs down to 21 requests for mercy, and executed 21 people, more than several other Florida governors. Florida and Texas
remain 2 of the last 7 states involved in state judicial and prosecutorial murder, while 43 states have come into the 21st Century. Since government murder was reintroduced by the Republican dominated Supreme Court in 1976, Jeb Bush as of December 2014 holds the record in Florida executions.

When he was asked what he would do for African Americans if elected, he replied 'probably nothing'.

Jeb Bush was a proponent of offshore drilling.
Florida depends heavily on its tourist industry.

He served on the board of a Norwegian company which sold fire equipment for oil operations.

Jeb Bush is on record in wanting to raise the retirement age, which would be a contract breaker.

Unlike his father who said 'no new taxes' and then raised them, J Bush said he will not rule out increasing taxes. http://www.politico.com/story/2014/12/jeb-bushs-policy-minefields-113624.html

a. Jeb Bush gave 310 million dollars in Floridian citizens money to Scripps to set up its animal torture labs. He also opposed state funds for stem cell research. The 2 wars he cocreated with G W Bush by his criminal suppression of the vote in the 2000 election in Florida killed billions of animals.

b. What are Bush's and Rubio's positions on the hunting of bears in Florida?

e George W Bush was named by Safari Club as governor of the year.

The privacy rights of Floridians who emailed Jeb Bush were violated as he released their emails.

Such stem cell research would have reduced the amount of pain inflicted on Florida animals in labs.

a Jeb Bush wants to repeal the health law passed under the current administration.

b He signed a bill and eliminated mandatory helmets for motorcyclists. ER doctors say helmets save many lives yearly.

He privatized many state jobs.

He expanded the power of the executive over the judiciary.

He tried to implement school vouchers which weaken public education.

(Rand Paul pointed out the hypocrisy of so many candidates who claim to be states' rights but would act legally to oppose states who legalize marijuana.)

G H W Bush, for a year the director of the CIA, engineered the Iran Contra scandal, meeting on March 12 of 1980 with James Woolsey, another former director of the CIA, to negotiate arms for Iran in exchange for not releasing the US hostages held by the government of Iran until After the 1980 election. The motive was the portrayal of President Carter as weak. The negotiation by private citizens (both Bush and Woolsey were) with a foreign government is a crime.

James Hatfield wrote the book Fortunate Son about the cocaine arrest and Awol military record of George W Bush. The Bush family fought the publication and was able to block the first publication. After the book was in the second attempt published, James Hatfield was found dead in an out of state motel room. As in the case of Gary Webb who revealed the CIA's role in distributing crack cocaine throughout black neighborhoods in the US, the murder was called a suicide.

Two operatives of George Bush attempting to position themselves for the 2016 election both lost their elections. Eric Levinson sent by Bush to Iraq to arrange the illegal immoral hanging of a foreign leader, Saddam Hussein, lost to incumbent Robin Hudson in a North Carolina Supreme Court race.

Whenever anyone prays for all beings, he or she is praying as well for those who have done the most harm.

Wbur's On Point on Dec 19 chose to promote a slavishly promoting book for the Bush campaign written by an employee of Pentagon war promoting animal flesh invested NPR.

The Bush family were cocreators of the bombing of the WTC

a Jeb Bush now has his own private equity firm, established offshore.

b While Florida citizens lost 300 million on Enron investments, Jeb Bush made money.

All but 2 worked in his brother's, father's or the Reagan
administration

Those who were in the Reagan administration
Otto Reich
George Shultz

Those who were in George W, George H W
and Reagan administrations:
Paul Wolfowitz warmonger The following quote is from thinkprogress.org

"Wolfowitz, who served as Deputy Secretary of Defense in the George W. Bush administration, began advocating an attack on Iraq shortly after the Sep. 11 attacks, established “what amounted to a separate government” to push for war and invited journalists to secret meetings in order to lay out the foundation for his plans. Wolfowitz established the Office of Special Plans in the Pentagon that ignored the conclusions of the intelligence community and fed policy makers and the media discredited claims of Iraqi weapons of mass destruction."

Those who were in G H W Bush
administration

Only
Lincoln Diaz-Balart
is new

*
Like Romney, JEB Bush HAS A NEW Private Equity Fund Based Offshore

"Documents filed with the U.S. Securities and Exchange Commission on Nov. 27 list Bush as chairman and manager of a new offshore private equity fund, BH Global Aviation, which raised $61 million in September, largely from foreign ­investors. In November the fund ­incorporated in the United Kingdom and Wales­—a ­structure, several independent finance lawyers say, that operates like a tax haven by allowing overseas investors to avoid U.S. taxes and regulations." Source: Bloomberg
*

Like HIS Brother George, JEB Announced HE Would Streamline Exeuctions

"One of Bush's central themes during the 1994 campaign was his desire to streamline the execution process for death row inmates. In order to do this, he proposed limiting death row inmates to only one appeal with the state, a measure he hoped would speed up the state's execution process. Bush named his plan "one trial, one appeal," and released it at a press conference in the spring of 1994. According to a May 19 report in the St. Petersburg Times, Bush told attendees, "I believe the one trial, one appeal will speed the enforcement of the death penalty by two to four years in most death cases." Source: Huffington Post
*
A Fraction OF THE Ways JEB Bush Stole THE Election From People'S Choice AL Gore

"Documents filed with the U.S. Securities and Exchange Commission on Nov. 27 list Bush as chairman and manager of a new offshore private equity fund, BH Global Aviation, which raised $61 million in September, largely from foreign ­investors. In November the fund ­incorporated in the United Kingdom and Wales­—a ­structure, several independent finance lawyers say, that operates like a tax haven by allowing overseas investors to avoid U.S. taxes and regulations." Source Michael Parenti

1 Jeb Bush fought access to abortion
2 He worked to end affirmative action He ended affirmative action in state contracts and college admissions.
In answer to 'what will you do for the black community?' he answered
'probably nothing'.
3 He lost his first attempt to be governor in 1994 to Governor Lawton Chiles
In 1994 he criticized Lawton Chiles for not executing fast enough.
4
Bush tried to take control of Terri Schiavo's end-of-life decision
5 He signed all gun lobby bills
6 His support among Iowa Tea Party voters who represent a third of Republcians is only 3%. 32% of Tea Party voters
in Iowa said they would definitely not support him

In the 2014 book by Michael Corrigan
CONSERVATIVE HURRICANE: HOW JEB BUSH REMADE FLORIDA

**************
Did all 3 Bush's work to privatize Social Security
Bush dealings with Bahrain
G W Bush and the Texas Rangers... the poor of Arlington Texas taxed to build the stadium... but G W in selling took
the profits
The murder connected to the book Fortunate Son.

All of us are, say teachers of the world's spiritual paths, temples of divinity in whom God dwells. That includes all candidates for the presidency. This column is not meant as personal criticism but as an information article for those deciding on how they will vote and/or work for a candidate for the US presidency.

Publishing emails of Floridians including their email arouses criticism

*A Monsanto's Connections to the Bush family.

The Murder of James Hatfield Whose wrote the Book Fortunate Son about G W Bush's AWOL record and cocaine arrest. Hatfield was found dead in an out of state motel room.

http://www.msn.com/en-us/news/politics/jeb-bush-%E2%80%98people-need-to-work-longer-hours%E2%80%99/ar-AAcJu62
http://rense.com
Add Your Comments
Support Independent Media
We are 100% volunteer and depend on your participation to sustain our efforts!