Add an Event
Newswire
Calendar
Features
Home
Donate
From the Open-Publishing Calendar
From the Open-Publishing Newswire
Indybay Feature
Publish to Newswire
Add an Event
Related Categories: Santa Cruz Indymedia | Government & Elections | Health, Housing & Public Services | Police State & Prisons
Santa Cruz Police Make More Arrests at City Hall Sleepout #9
by Alex Darocy (alex [at] alexdarocy.com)
Saturday Sep 12th, 2015 8:42 PM
On September 8, community members protesting laws that criminalize homelessness held their ninth in a series of group sleepouts at Santa Cruz City Hall, which is closed to the public at night. At least three people were issued citations, and two others were reportedly arrested for participating in the latest protest. Despite that, a large group stayed through the night and slept at City Hall. They call themselves "Freedom Sleepers" and have planned their next sleepout for September 15. [Top photo: A person inside a small tent in the courtyard of Santa Cruz City Hall is issued a citation. Scroll down for more photos from the September 8 sleepout.] 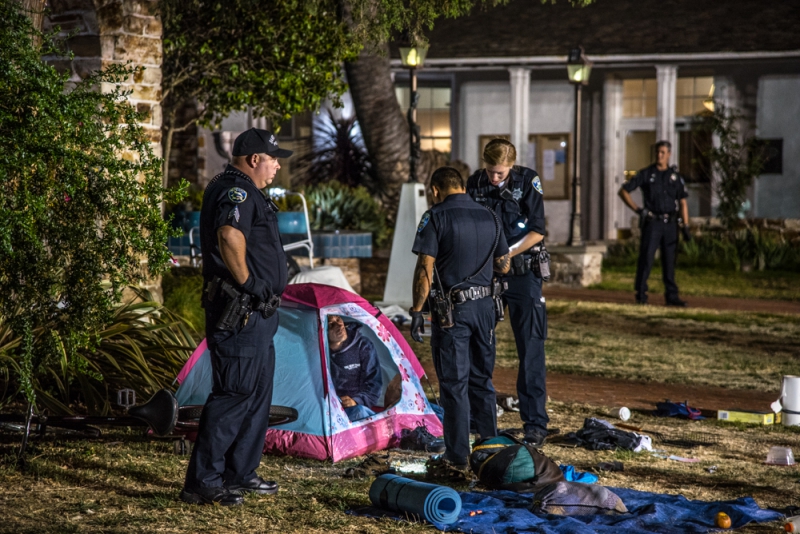 original image (1000x668)
Since the sleepouts began on July 4, police have consistently attempted to disperse protesters away from City Hall and its garden courtyard by conducting raids. In the process, many participants have been issued citations, and several have been arrested.

One individual taken to jail on the evening of September 8/9 had been holding a protest sign and speaking loudly about the injustice of the police raids as people were being cited in the courtyard. She was arrested when she began to walk away from two police officers who were attempting to communicate with her. She had been standing on a flat, open section of the brick walkway that serves as the main entrance to the City Hall property. The area is only feet from the public sidewalk, but is considered by police to be part of the "no trespassing" zone.

To discourage individuals from sleeping at City Hall, portable stadium lighting units have been employed by police during the last two protests, and "no parking" hoods were placed over parking meters on Center and Church Streets to distance protesters from their cars.

The lighting units are placed in front of the courtyard where protesters have been setting up sleeping locations, and have been guarded all night by a team of First Alarm security guards who also watch over the protest.

Additionally, a no trespassing zone was established and maintained around council chambers while the September 8 city council meeting was in session. Food Not Bombs had previously been using the area to cook and share food.

During the police raids, protesters generally leave the courtyard area of City Hall and sleep on the sidewalk. The group decided early on at a general assembly that this would be the tactic used whenever the police arrived. This was a strategic decision, since the sidewalk around City Hall is exempt from the sit/lie ordinance, and sleeping there narrows the laws applicable to the protest. Many of the protesters want to be cited specifically for sleeping, while others have stated they are also concerned with issues more broadly related to the right to sleep or protest 24 hours a day at Santa Cruz City Hall, the center of local civic life. 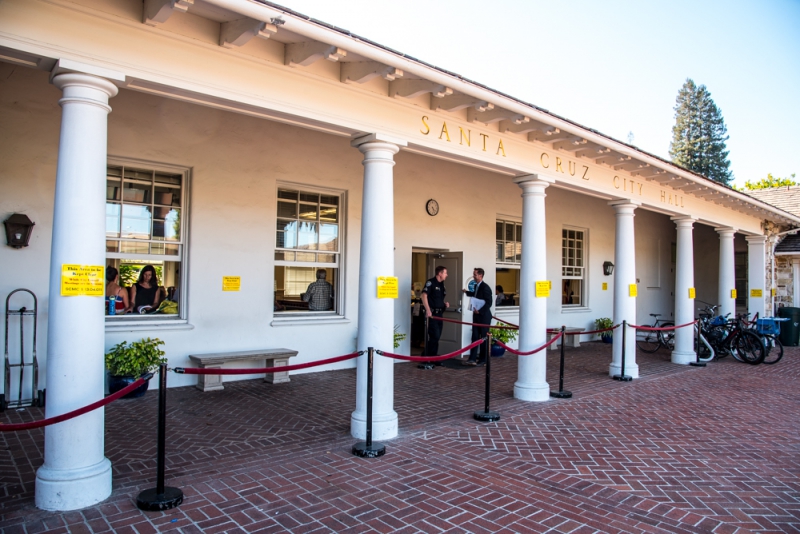 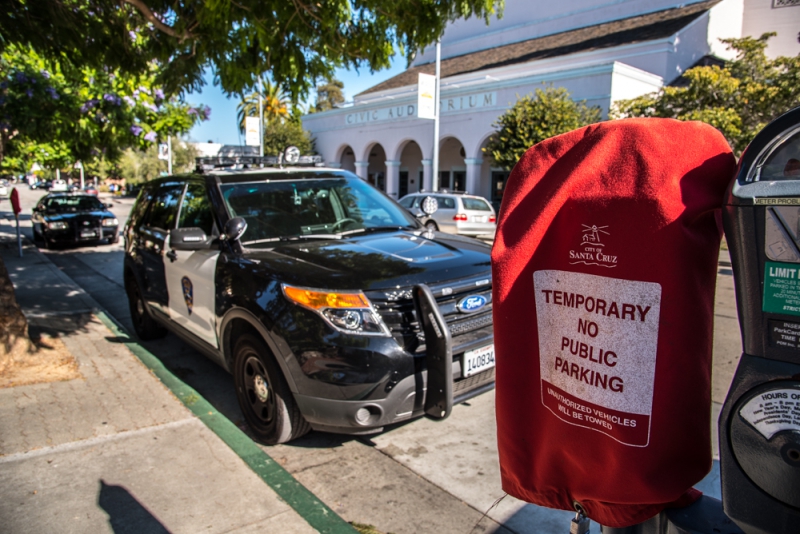 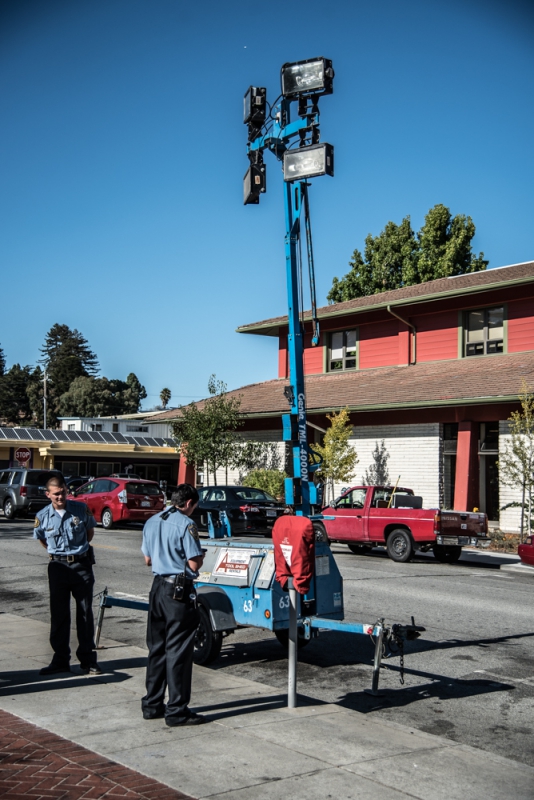 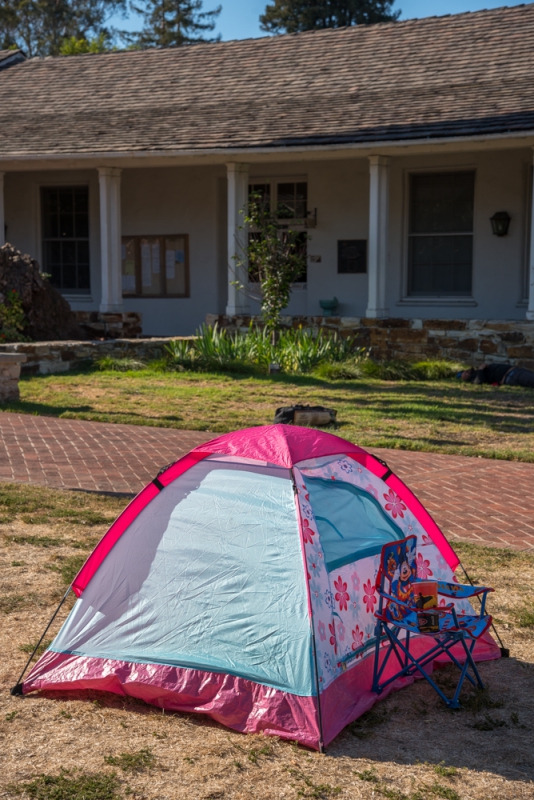 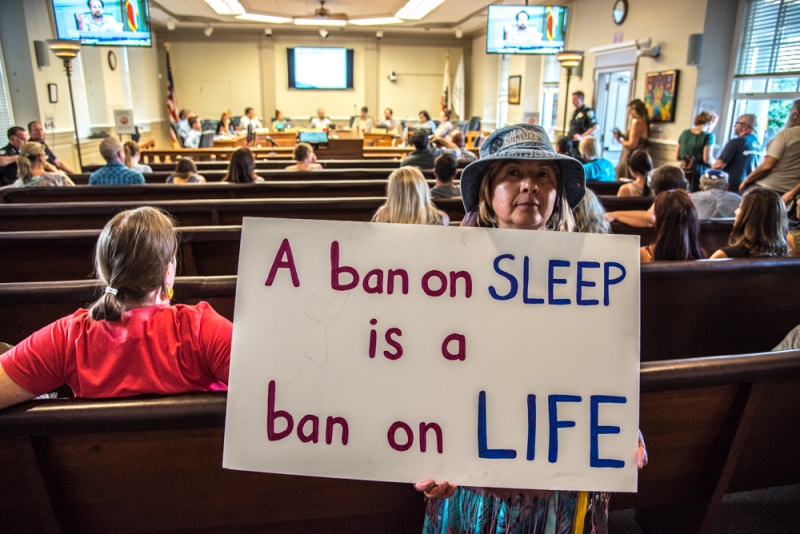 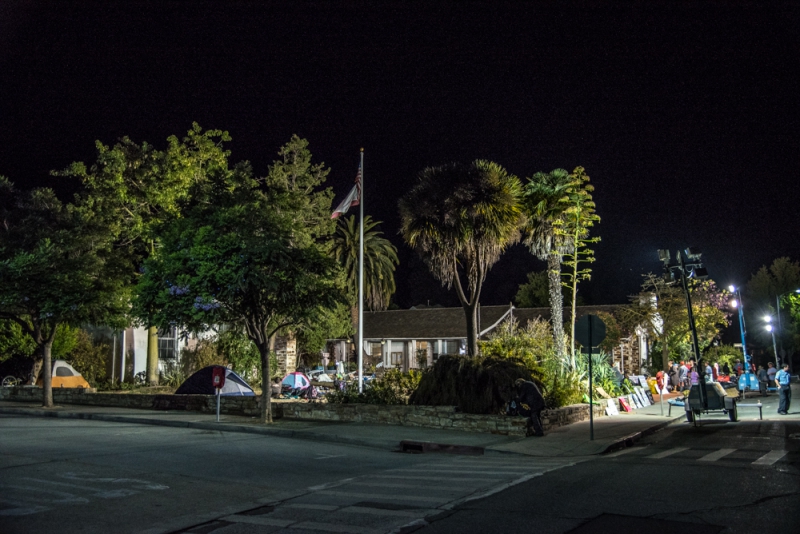 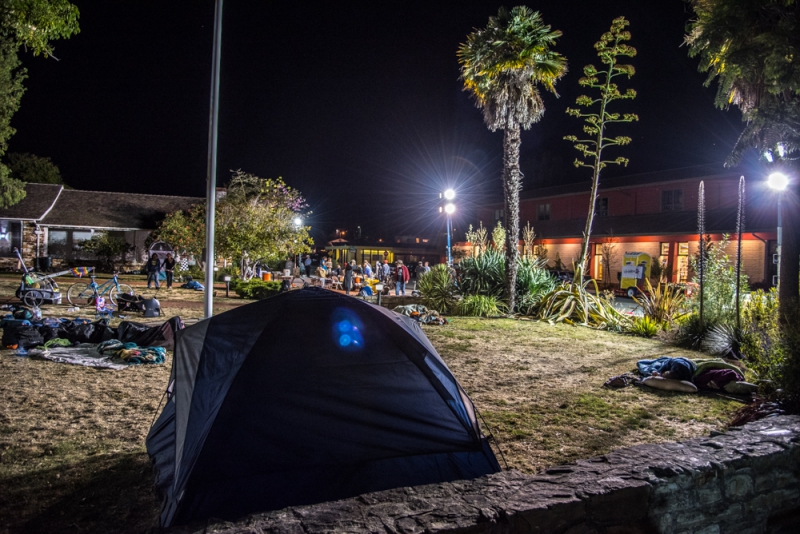 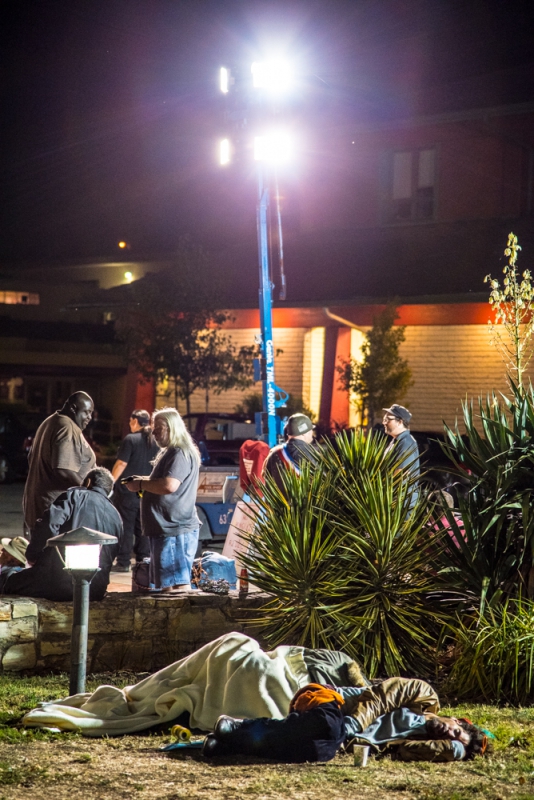 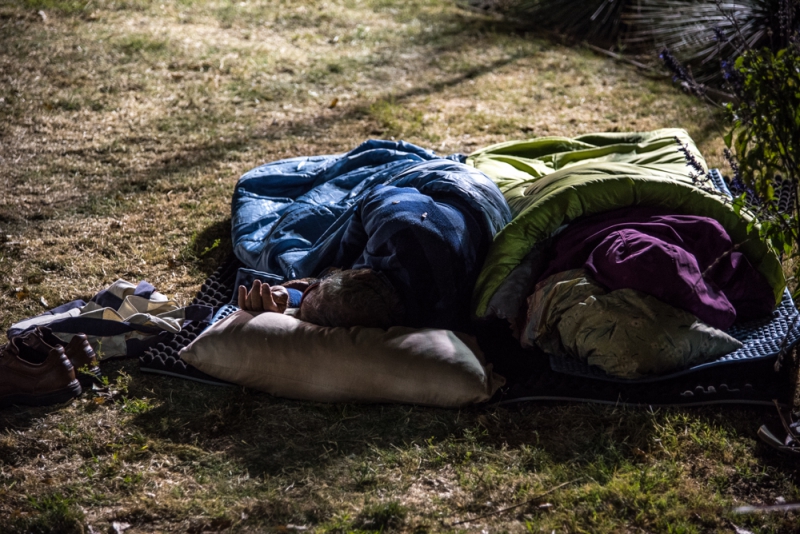 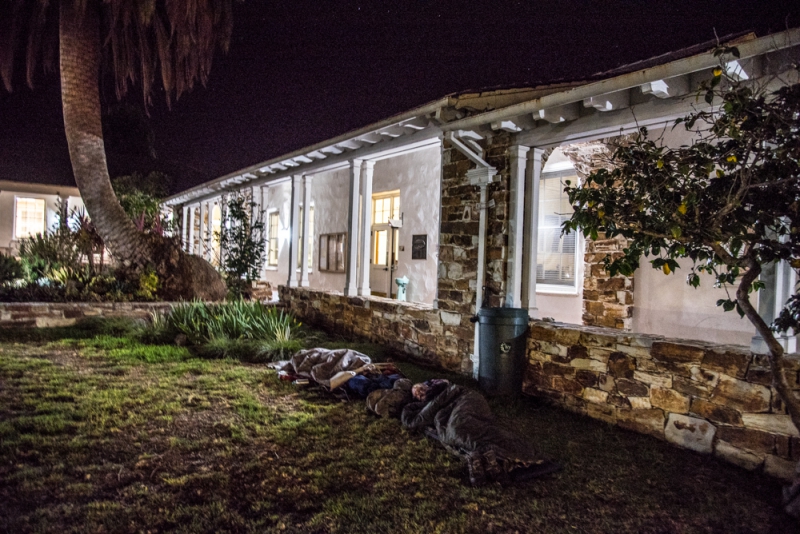 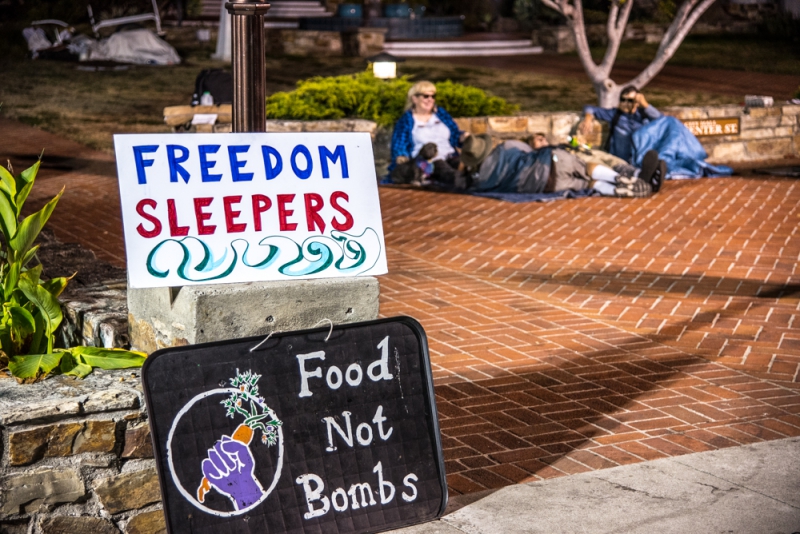 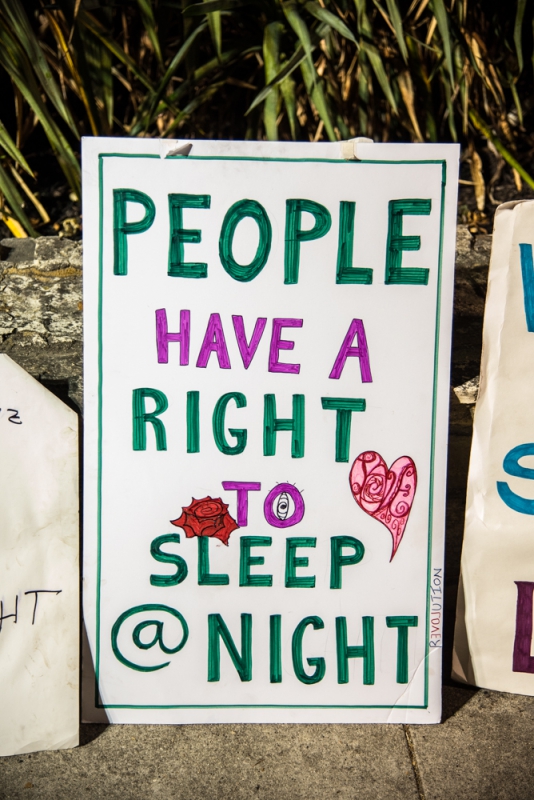 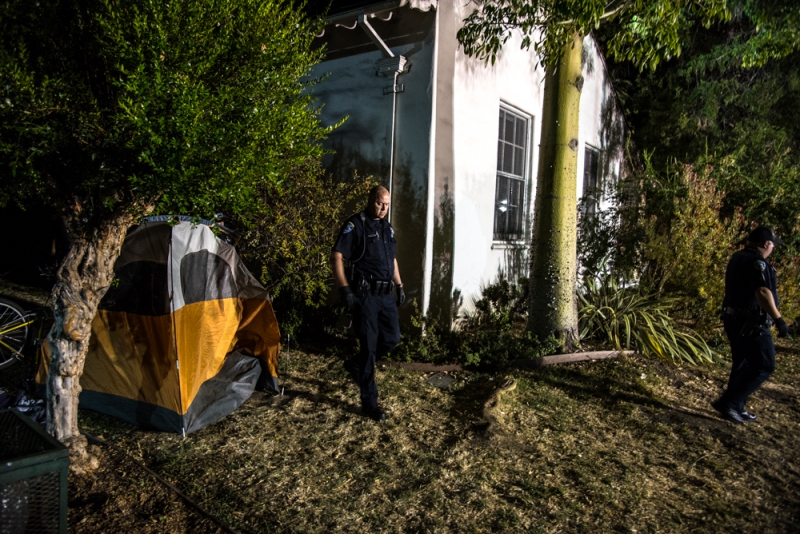 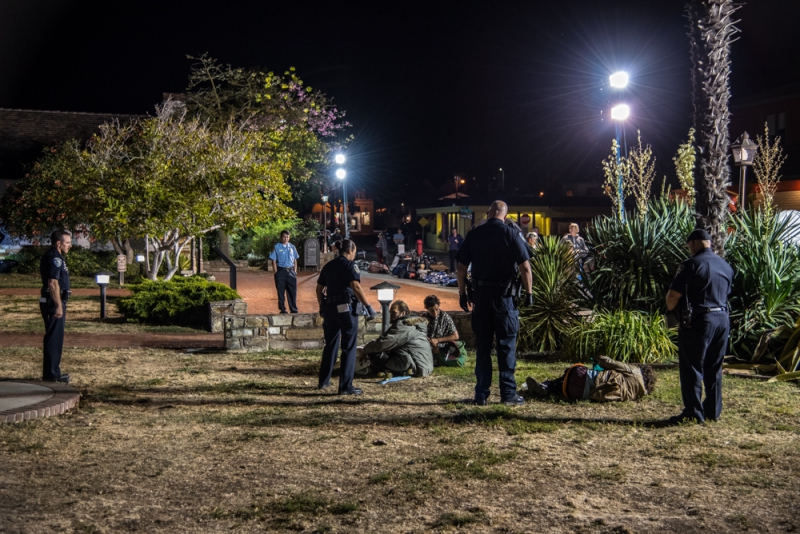 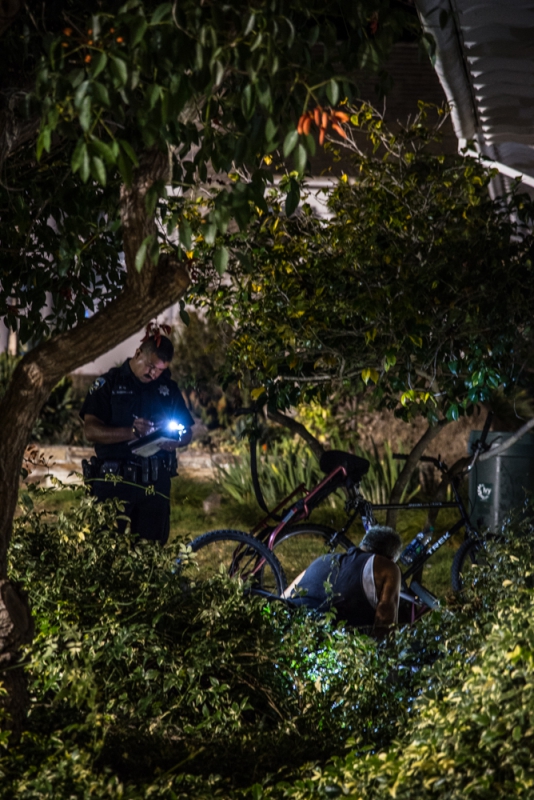 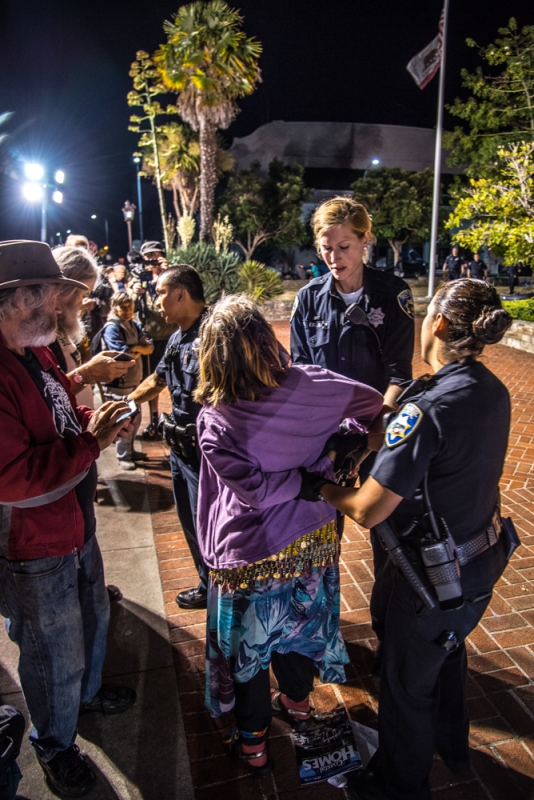 original image (668x1000)
§Police brought her to the center of City Hall and briefly processed her arrest there
by Alex Darocy Saturday Sep 12th, 2015 8:42 PM 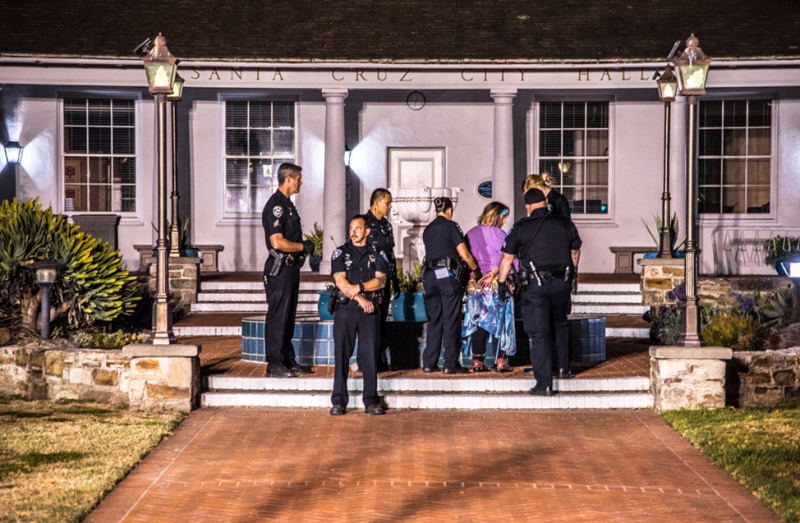 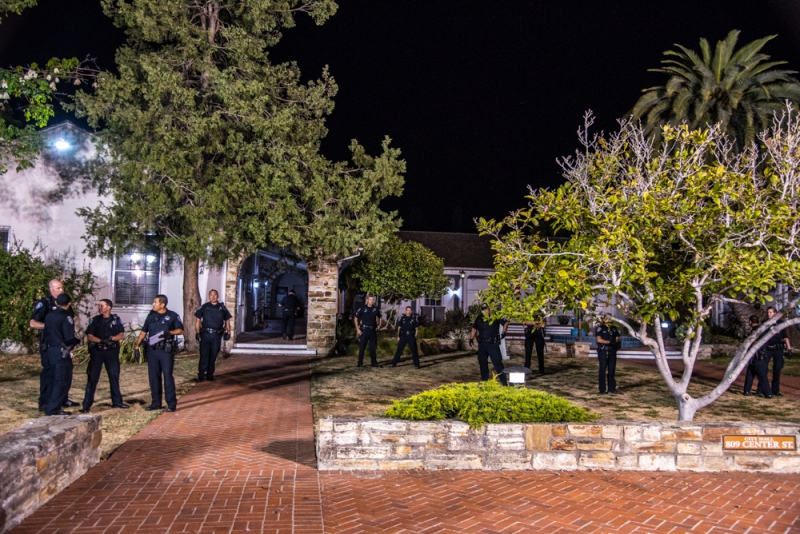 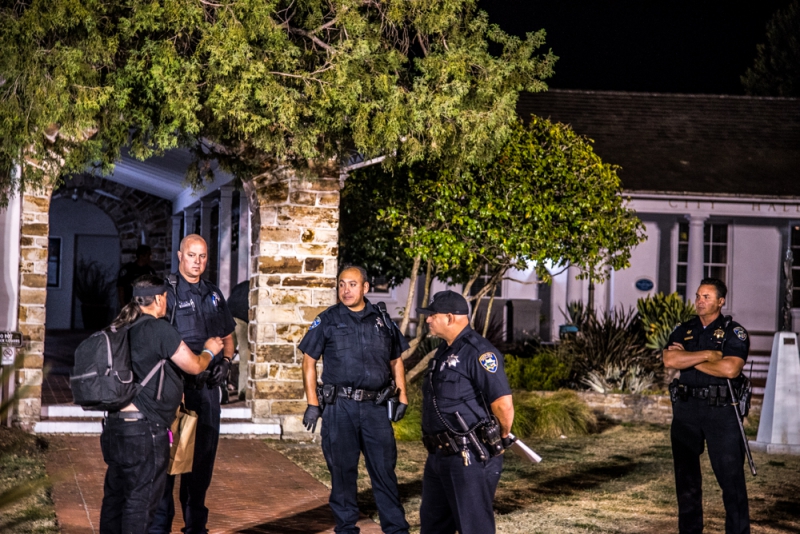 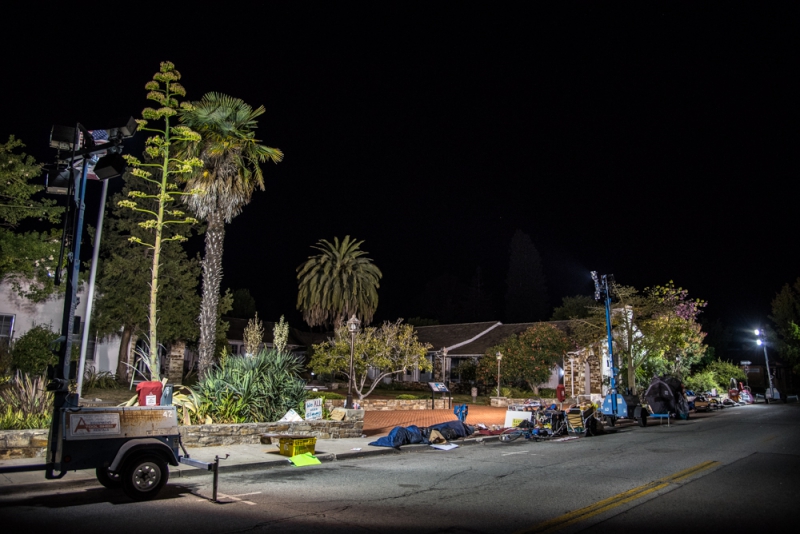 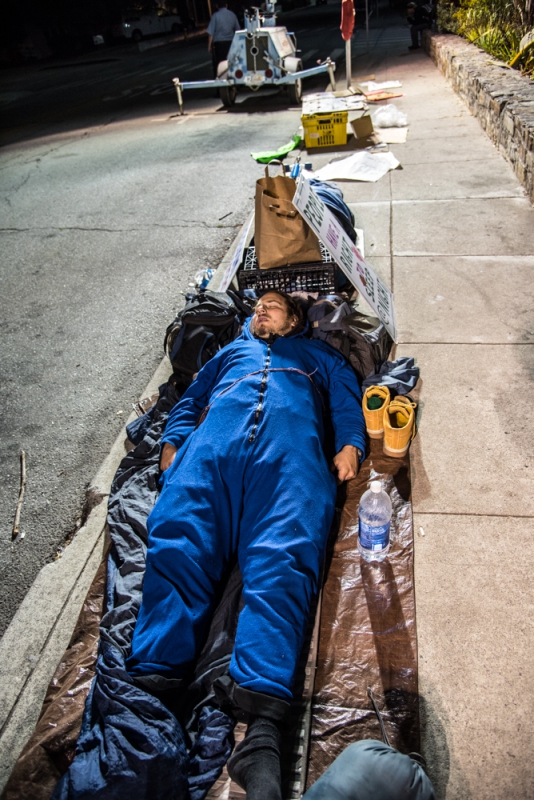 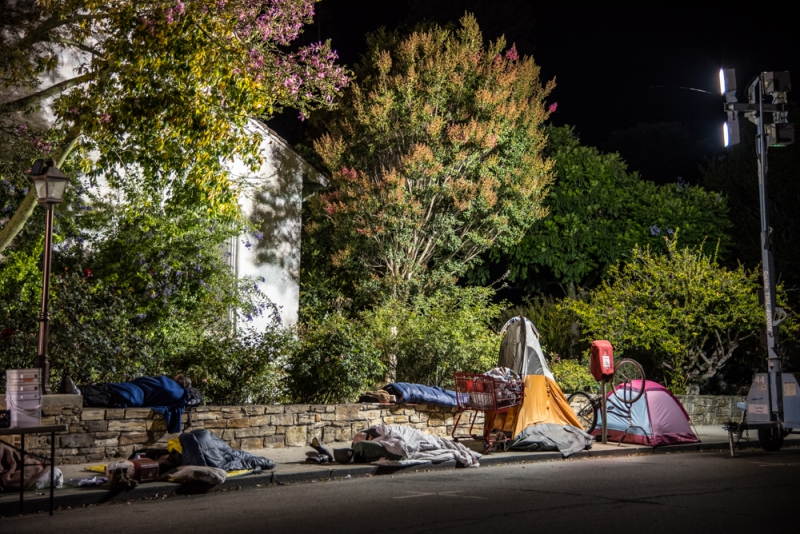 original image (1000x668)
Freedom Sleepers on the sidewalk and on the retaining wall around City Hall
§The food table at 5am
by Alex Darocy Saturday Sep 12th, 2015 8:50 PM 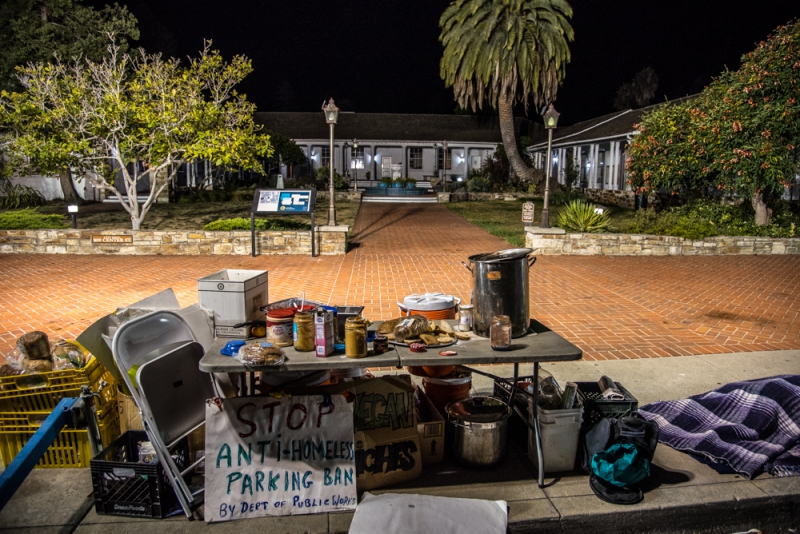 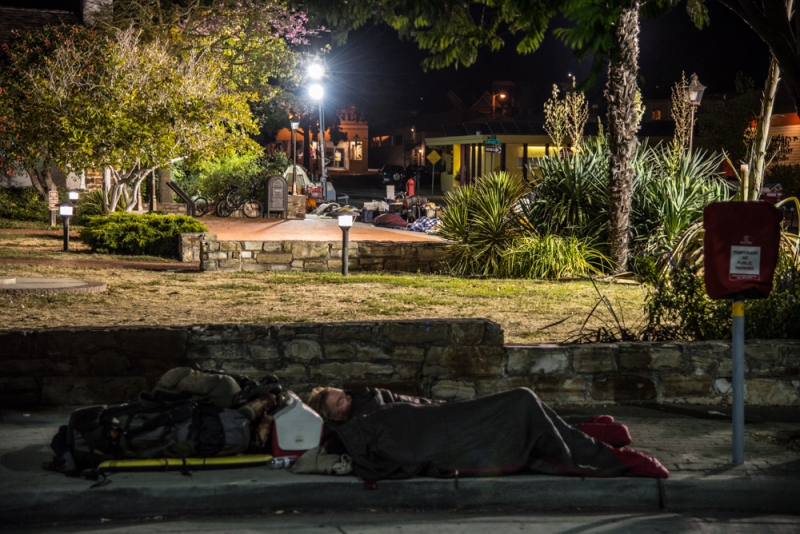 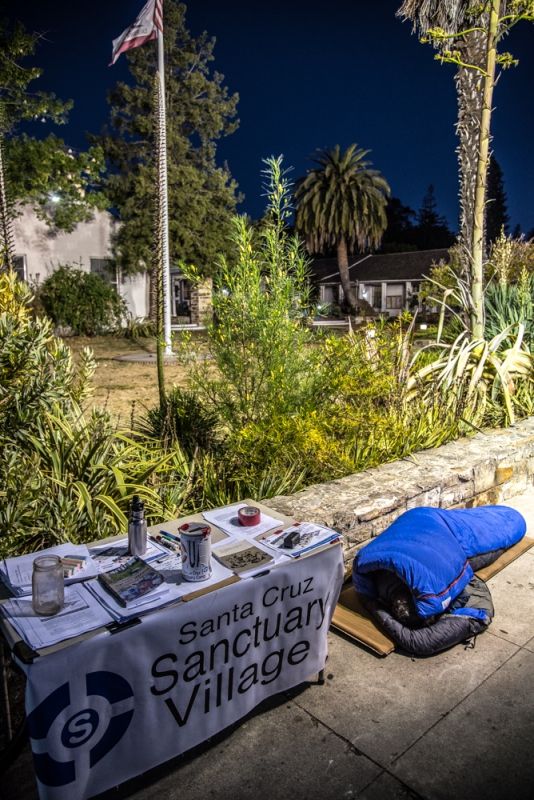 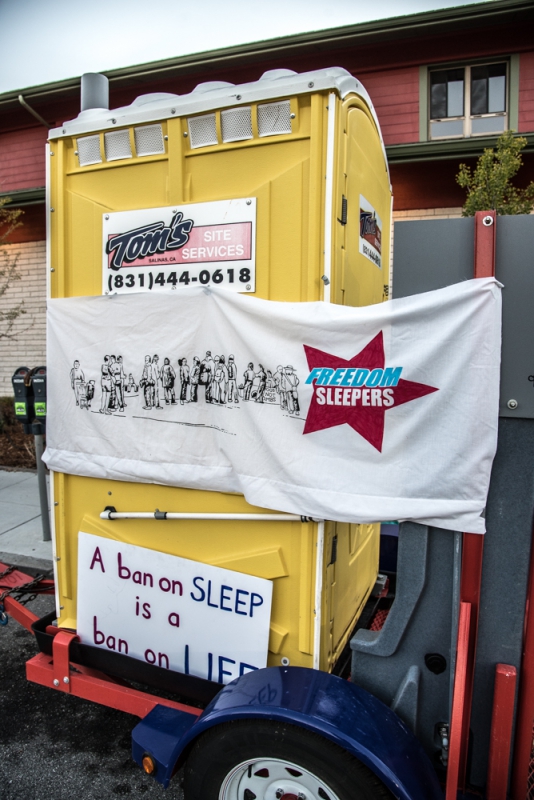 original image (668x1000)
The Freedom Sleepers port-a-potty
Add Your Comments
LATEST COMMENTS ABOUT THIS ARTICLE
Listed below are the latest comments about this post.
These comments are submitted anonymously by website visitors.