Add an Event
Newswire
Calendar
Features
Home
Donate
From the Open-Publishing Calendar
From the Open-Publishing Newswire
Indybay Feature
Publish to Newswire
Add an Event
Related Categories: International | San Francisco | Anti-War | Labor & Workers
Jeremy Corbyn Joined Stop The War Conference In San Francisco In 2007
by repost
Saturday Sep 12th, 2015 4:32 PM
Jeremy Corbyn the newly elected leader of the UK Labour Party was last in San Francisco where he attended and supported an Stop The War conference at ILWU Local 10. His speech at the conference is as true today as it was when he gave it. 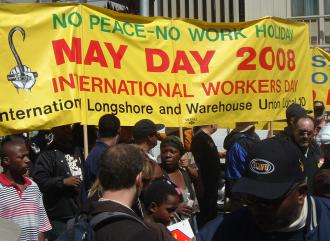 British Labor MP Jeremy Corbyn reports from the U.S. on the one-day labor conference hosted by the ILWU to build opposition to the war in Iraq and calling for the withdrawal of U.S. troops. It took place in San Francisco on Saturday, October 20, 2007.

The International Longshoremen and Warehouse Men’s Union (ILWU) has a long and very honorable tradition of international solidarity.

Its members are organized in all the ports and docks on the west coast of the U.S. and in Hawaii and are a very powerful force in the U.S. labor movement.

Their legendary leader, the late Harry Bridges, is revered for the battles during the Great Depression, when labor fought for its existence against the overwhelming might of their employers.

It is not an insular or inward-looking organization and has supported struggles and causes all around the world. On his release from prison in 1990, Nelson Mandela made specific reference to the support that ILWU members had given in practical sanctions to the apartheid regime.

They also gave huge financial and real support to the miners in Britain during the 1984-5 strike and, more recently, they gave all support possible to the Liverpool dockers during their heroic struggle to save jobs on the Merseyside docks.

The ILWU exemplifies some of the best traditions of the U.S. labor movement of linking industrial and political actions. Meetings are held in the ILWU “hiring hall” which, in the daytime, acts as an employment exchange for dockworkers and, in the evenings, is a place of debate and discourse. Huge banners adorn the concrete walls opposing the Department of Homeland Security and the war in Iraq and calling for social justice such as free health care in the U.S.

Last weekend, it organized a one-day conference on building opposition to the war in Iraq and calling for the withdrawal of U.S. troops.

It has participated in all of the big anti-war demonstrations since 2003 and is calling for support for next weekend’s coast-to-coast activities demanding peace in Iraq.

The conference was opened by Jack Heyman of ILWU Local 10, who was one of the speakers at the million-plus demonstration in London in 2003. He outlined the reasons why the union had called the conference and was supporting the anti-war effort, with particular focus on the growing crisis of the poorest people in the U.S., lack of funding for schools and increasing attacks on civil liberties through the Department of Homeland Security.

Outside the hall in the tourist centre that is Fisherman’s Wharf of San Francisco, one could see significant numbers of beggars. Indeed, one man whom I met, who was collecting money for soup kitchens, told me that most of the people who were living rough and were making use of the soup kitchens were ex-soldiers. As if to drive the point home, ABC News reported last Saturday that 100,000 U.S. combatants in Iraq were now seeking psychiatric help at home—victims of the war just as much as everybody else.

The speakers at the conference included Cindy Sheehan, who is famous for her camp outside the Bush ranch in Crawford, Texas, and her worldwide campaigning despite her terrible personal loss in Iraq. She personifies the disappointment of many in the United States who voted Democrat in the mid-term elections to wrest control of both the House and the Senate from Bush’s clutches, only to find that, despite votes for the withdrawal of all U.S. troops, Congress has nevertheless gone on to provide Bush with the funds to maintain an occupation of Iraq.

Clarence Thomas, not to be confused with his ultra-conservative namesake in the Supreme Court, but the organizer of the million-plus march in Washington, spoke for many in the black community when he highlighted education and achievement problems, the disproportionate number of blacks in the armed services and the declining living standards of many of the poorest people to pay for a war that is now running into many billions of dollars.

The international flavor of the event was also emphasized by a delegation from the Japanese Railway Workers Union, who described their struggle against privatization and their contribution to try to prevent the militarization of Japan.

The conference was an organization of working-class activists, mainly from the west coast of the U.S., and included a very well-received speech calling for an amnesty for migrant workers to grant them legal status in the U.S. and a very powerful speech from the president of the Oakland Education Association Betty Olson-Jones, who described on behalf of teachers the shortage of funding in schools, again linked to the war.

To many outside the United States, the lack of a public health-care system has always been a cause of bemusement. It was not surprising that one of the campaigns that was represented there was for a proposition of the establishment of a fully funded public health-care system—an exciting development and a far cry from the infamous proposition 13 to cut public taxation which originally propelled Reagan to the U.S. presidency.

The war in Vietnam ended with the loss of a million lives in Vietnam, 55,000 U.S. soldiers’ dead and many thousands more who later committed suicide at home. It is too easy to draw complete parallels with Vietnam, but the cost, loss of life and anger that is being created at home in the U.S. should not be forgotten and is fuelling a major part of the worldwide anti-war movement.

The Turkish parliament voted to send troops across the border into northern Iraq at the weekend despite the entreaties of the United States and many other countries.

The regular bombardment of alleged Kurdish positions in northern Iraq has intensified as the Turkish army moves thousands of troops along the border.

U.S. Secretary of State Condoleezza Rice is now putting pressure on the administrations in Baghdad and Irbil to do the job of the Turkish forces for them by attacking Turkish Kurdish positions in Iraq.

Amid all the self-righteous indignation on the part of the U.S. and the governments of Turkey and Iraq, the situation facing many Kurdish people in southeastern Turkey seems to have been forgotten. Full recognition of language and political rights has not yet been won and repeated ceasefires by the PKK have not been followed up with political dialogue by either the government of Turkey or the international community.

Perhaps, instead of heading into another awful conflict, we should look at the underlying causes of Kurdish discontent in south-eastern Turkey and recognize that, unless those rights of expression, assembly and organization are observed, all the fulminating in the world from Rice will not bring about peace or justice.

Jeremy Corbyn is Labor MP for Islington North. He can be contacted at corbynj [at] parliament.uk

Labor leaders from around the world gathered in San Francisco today to call on workers to stand up and take organized action against war in Iraq, saying that politicians can't be counted on to halt the bloodshed.

Several speakers cited the civil rights movement of the 1950s and the anti-Vietnam War movement of the 1960s as models to follow, saying that both achieved change that would not have occurred if matters had been left in the hands of those running the country.

"Until people get off their asses and do something, there won't be a change," Clarence Thomas, past secretary-treasurer of the International Longshore and Warehouse Union Local 10 and a third-generation ILWU member, told the audience at the local's hall near Fishermen's Wharf.

Jeremy Corbyn, a Labour Party member of Parliament in Britain, cited the staggering number of civilian deaths in the Iraq war and the thousands of returning soldiers who have needed psychiatric care to deal with what they faced during battles in that country.

Corbyn told the audience of about 150 labor officials that the war in Iraq is "a disaster of the grandest scale possible for the people of Iraq and the rest of us."

Thomas, whose local and ILWU local 34 co-hosted the conference, and other speakers said that leaders at the conference should go back to their unions and begin a dialogue resulting in concrete actions that highlight their opposition to the war.

Several speakers mentioned that while billions of dollars funnel into the wars in both Iraq and Afghanistan, there are urgent needs for health care, education, disaster relief and housing that go unmet or underfunded.
https://archive.org/…/Johnp-LaborConfere...
Add Your Comments
Support Independent Media
We are 100% volunteer and depend on your participation to sustain our efforts!