Newswire
Calendar
Features
Home
Donate
From the Open-Publishing Calendar
From the Open-Publishing Newswire
Indybay Feature
Publish to Newswire
Add an Event
Related Categories: Santa Cruz Indymedia | Government & Elections | Health, Housing & Public Services | Police State & Prisons
Crackdown from Police against the Freedom Sleepers
by via Freedom Sleepers
Tuesday Sep 1st, 2015 3:48 PM
The City of Santa Cruz and its police department have decided to crush the Freedom Sleepers protests at Santa Cruz City Hall, and today they launched the first strike of their campaign. At 1 p.m. they put little red hoods on all of the parking meters around city hall, and have indicated that they will ticket and then tow any vehicles parked in these spaces. The first casualty of this action was Keith McHenry, the founder of the international humanitarian organization Food Not Bombs, whose little red truck was ticketed as he was busily preparing a meal at city hall so serve this evening to homeless and housed members of the Santa Cruz community, as well as the Freedom Sleepers and other activists and protesters. 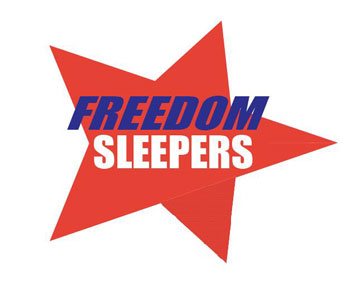 The campaign to crush the protests was revealed to the Freedom Sleepers in an intelligence report on an email received yesterday by city employees, staff, city council, and the police department. The Freedom Sleepers held an emergency meeting last night to begin planning their strategy, tactics, and logistics in anticipation of a potentially much more serious confrontation with police tonight than has occurred during past protests.

The Freedom Sleepers will hold a general assembly today at 6 p.m. with the broader community of activists and protesters, many of whom are prepared to be hauled off to jail later this evening. Local and regional media are urged to come cover events as they unfold.

The Freedom Sleepers' moral compass and former Freedom Rider Rabbi Phil Posner has made it clear that he is looking forward to an eventual showdown with the city over the constitutional and civil rights issues involved, and the rest of the Freedom Sleepers seem to be falling in line behind him.

While the Freedom Sleepers all are very excited that the long-anticipated attack is finally underway, they also are extremely disappointed that the City of Santa Cruz has elected to crush the protests instead of reevaluating the sleeping and camping bans that ignited them, despite the federal government's recently announced three-pronged attack on laws and municipalities that criminalize homelessness. More information about the federal government’s announcement is available here:

Local Officials Have Pushed To Criminalize Homelessness For Years. The Feds Are Starting To Push Back.
http://thinkprogress.org/economy/2015/08/18/3692251/homelessness-criminalization-doj-usich-hud/
§UPDATE: Mass arrests seem likely in Santa Cruz TONIGHT!!
by via Freedom Sleepers Tuesday Sep 1st, 2015 5:06 PM
Escalating their attack on the months-long protests in Santa Cruz, police descended on Santa Cruz City Hall at 3 p.m. today and are setting up high-powered lights as another part of the campaign to crush the Freedom Sleepers protests over constitutional and civil rights issues that seem to be tearing this seaside community apart.

Despite its origins as nonviolent civil disobedience, the ongoing protests by activists, religious leaders, constitutional and civil rights legal scholars, and both homeless and housed members of the broader Santa Cruz community seem to be heading toward a much more serious confrontation with the Santa Cruz police, many of whom have been accused in the past of assaults on homeless people and their supporters in the years since ordinances banning camping and public sleeping in the city limits went into effect.

Rather than accomplishing their intended goal of driving homeless people--84% of whom were Santa Cruz residents at the time they became homeless--and other "undesirable elements" out of town, these ordinances appear to have polarized this once peaceful community to the point that violent confrontations between protesters and police soon might become commonplace.

If you are planning a trip to Santa Cruz anytime soon, consider avoiding the downtown business district, the Boardwalk amusement park, and the city's main beach, as many believe these areas will be most affected by the ongoing unrest.
Add Your Comments

§The lights are a known tactic.
by G
Tuesday Sep 1st, 2015 5:43 PM
The red bags and klieg lights have been used against previous City Hall protests. Is a pattern of behavior now established?

The noise and smell from the lights annoyed the neighborhood.

The lights make it easier for people to read protest signs at night.

The lights went away after an amusing/embarrassing 'lost the key, ran out of fuel' incident.
http://PeaceCamp2010insider.blogspot.com/
Add a Comment
§I want to thank the Santa Cruz Police Department
by Razer Ray
Wednesday Sep 2nd, 2015 11:03 AM 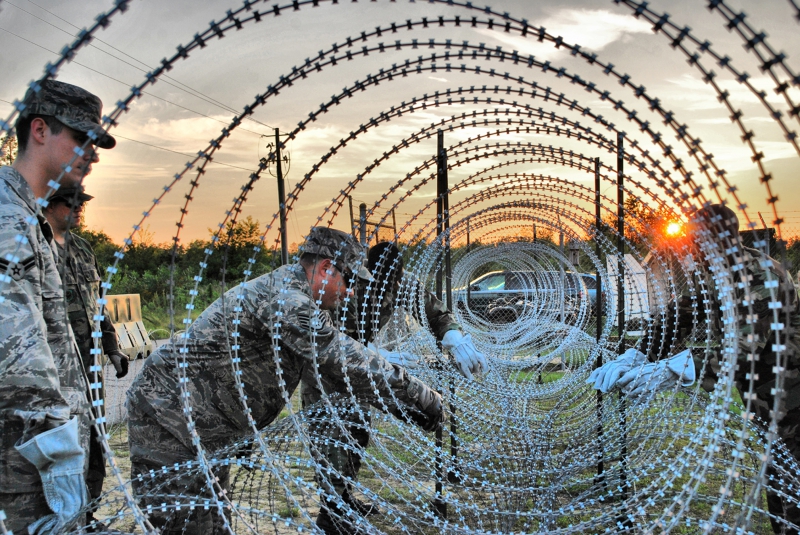 original image (2700x1807)
I want to thank the Santa Cruz Police Department for supplying the festival lighting at last night's protest. Many folks dropped by or pulled over in their cars to ask us what was going on.

Next time why don't you see to it that Razer Wire is provided as it would be self-explanatory to passersby?
Add a Comment
§Can someone list the list of demands the Freedom Sleepers want?
by saul
Wednesday Sep 2nd, 2015 1:00 PM
you would think that in every post or thread at least the laundry list of demands would show up.
Add a Comment
Support Independent Media