Add an Event
Newswire
Calendar
Features
Home
Donate
From the Open-Publishing Calendar
From the Open-Publishing Newswire
Indybay Feature
Publish to Newswire
Add an Event
Related Categories: California | Central Valley | Environment & Forest Defense | Government & Elections
Big Oil spent $6.2 million lobbying CA officials in year's first six months
by Dan Bacher
Wednesday Aug 19th, 2015 6:13 PM
In California environmental politics now, there is no bigger issue than than the capture of the regulatory apparatus by the regulated, including Big Oil, agribusiness, developers, the timber industry and other corporate interests. This is why fishermen, Tribal leaders, family farmers, environmentalists and grassroots Californians must relentlessly expose and fight this regulatory capture in order to restore our rivers, oceans, fisheries and the public trust - and support state and national campaigns including 99Rise and Move to Amend to take the corporate money out of politics.

Who would have ever thought WSPA was funding the California Driver's Alliance? Graphic courtesy of Stop Fooling California. 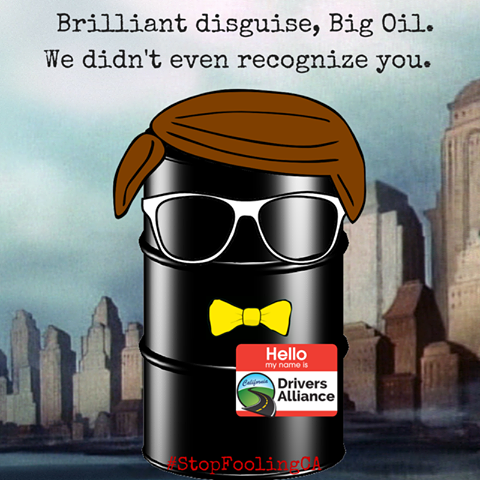 The oil industry spent $6.2 million to lobby legislators and other state officials in California in the first six months of 2015, according to a report just released by the California Secretary of State's Office.

Last year WSPA spent a record $8.9 million on lobbying, double what it spent in the previous year. WSPA spent $4.67 million in 2013. (http://www.eastbayexpress.com/SevenDays/archives/2015/02/06/big-oil-group-spent-89-million-last-year-lobbing-jerry-brown-and-california-officials).

Big Oil is currently spending over $1 million per month to fight legislation and regulations to prevent future oil spills, to protect our drinking water supplies from contamination by fracking waste water, from cleaning up the air, and from protecting marine protected areas from offshore oil drilling.

Oil companies funnel most of their California lobbying money through WSPA, the industry’s trade association, but they also spend additional money through their own lobbyists. In addition to their WSPA contributions, Chevron spent $1.5 million lobbying for influence over California laws in 2015's first six month, according to Sarah Rose, Chief Executive Officer of the California League of Conservation Voters, in a letter to supporters.

Last year, the oil industry spent $7.6 million to defeate a measure calling for a fracking ban in Santa Barbara County and nearly $2 million into an unsuccessful campaign to defeat a measure banning fracking in San Benito County during the November 2014 election. Chevron spent $3 million to elect their selected candidates to the Richmond City Council, but they were defeated by a grassroots coalition.

Big Oil also exerts its influence by setting up Astroturf groups to promote its agenda. Last week, WSPA launched a campaign against climate change bills in the Legislature, according to Rose. Under the thinly-disguised mask of their Astroturf group "California Driver's Alliance," WSPA's ads attacking the legislation are now running on television, internet, and radio in several key legislative districts throughout the state.

Senator Hannah-Beth Jackson (D-Santa Barbara) has jointly authored with Senator Mike McGuire (D-Healdsburg) Senate Bill 788, which would ban new offshore oil drilling in state waters off Tranquillon Ridge, located in a "Marine Protected Area" off the coast of Vandenberg Air Force Base created under the MLPA Initiative. SB 788 is currently in the Assembly Appropriations Committee and is expected to be up for a vote in the State Assembly as the Legislature enters its last month of the legislative session, according to Senator Jackson’s office.

And guess who opposes this legislation? Yes, "marine guardian" Reheis Boyd’s WSPA, is leading the charge to defeat the bill.

WSPA is also opposing two bills sponsored by Senator Jackson that were spurred by the recent Santa Barbara Oil Spill that fouled many miles of coastline on May 19 after after a badly corroded oil pipeline owned by Plains All American Pipeline burst off Refugio State Beach.

You can expect Big Oil to continue dumping millions of dollars into stopping these and other environmental bills in the California Legislature, as the industry has done over the past decade.

Big Oil is the largest and most powerful corporate lobby in Sacramento, and as we have discussed, wields its influence by spending its money on lobbying and election campaigns, creating Astroturf groups and getting its officials and friends on state regulatory panels.

In California environmental politics now, there is no bigger issue than than the capture of the regulatory apparatus by the regulated, including Big Oil, agribusiness, developers, the timber industry and other corporate interests. This is why fishermen, Tribal leaders, family farmers, environmentalists and grassroots Californians must relentlessly expose and fight this regulatory capture in order to restore our rivers, oceans, fisheries and the public trust - and support state and national campaigns including 99Rise and Move to Amend to take the corporate money out of politics.