by Dan Bacher
“The most disturbing aspect of the documents are that the Brown Administration and water exporters don’t trust Californians,” said Conner Everts with the Southern California Watershed Alliance. “Why do they feel the need to “fool” Californians? To advance their deeply flawed multi-billion-dollar tunneling experimental export plan.”

Photo of the Sacramento River near Clarksburg by Dan Bacher. 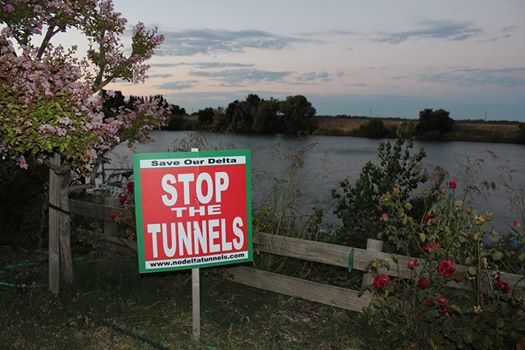 Governor Jerry Brown's Delta tunnels plan hasn't been approved yet by the permitting agencies, but documents obtained from the Metropolitan Water District (MWD) of Southern California reveal that the state and tunnels proponents have identified 300 parcels in the Delta they intend to take through eminent domain.

The newly released documents obtained through Public Records actions demonstrate that water exporters and the "Delta Design Construction Enterprise," housed within the California Department of Water Resources (DWR), have already developed plans to “acquire” family farms and "right of way" in the Sacramento-San Joaquin River Delta through eminent domain, according to a joint statement from Restore the Delta, Delta landowners and the Southern California Watershed Alliance.

I challenge anybody who doesn't believe that the "fix is in" on the Delta Tunnels plan to review the two “Acquisition Management Plan" documents, obtained from the Metropolitan Water District of Southern California. The process to "acquire" Delta land is spelled out in minute detail, showing that the Brown administration and supporting agencies believe the approval of construction of the two massive tunnels under the largest estuary on the West Coast of the Americas is a foregone conclusion.

You can read the documents by going here:
http://restorethedelta.org/wp-content/uploads/2015/08/DCE-Cm1-Property-Acquisition-Plan-2-Fr-MWD-PRA-2015.pdf
http://restorethedelta.org/wp-content/uploads/2015/08/DCE-Cm1-Property-Acquisition-Plan-1-Fr-MWD-PRA-2015.pdf

Delta family farmers, who for more than six years have successfully litigated against DWR on eminent domain issues, said they are "shaken" by the 160—page property acquisition plan.

“It is wrong and premature that the Department of Water Resources has a unit creating a secret land acquisition plan to take 150 year-old farms, like ours, through condemnation,” said Richard Elliot, whose family has farmed pears, cherries and other food crops in Courtland for more than 150 years and has never sold any of their land in the Delta.

Elliot pointed out how some of the most fertile land in the West, Delta farmland, is being condemned in order to keep irrigating toxic, drainage impaired land on the west side of the San Joaquin Valley, land that many believe should have never been irrigated.

“Now it is going to be condemned by thirsty water agencies working with DWR," Elliot said. "It does not make good policy sense to forsake prime Delta farmland with access to water and moderate weather conditions to farm in a dry desert that is filled with salt and selenium in its soils and that is not sustainable. The entire plan doesn’t make for sustainable food policies, smart land use practices, or even common sense."

The documents include maps of targeted farm parcels in the Delta - and envision groundbreaking ceremonies for the controversial tunnels as early as July 2016.

“While Delta and good-government activists are busy mobilizing comments in a democratic process, we discover state agencies view public oversight as simply a distraction,” said Barbara Barrigan-Parrilla, Executive Director of Restore the Delta. “These documents arrogantly envision groundbreaking ceremonies as early as July 2016."

“Bulldozers and cement trucks are ready to roll! Red ribbons are budgeted! All for a $60 billion boondoggle without even one permit. Clearly, water officials under the Brown Administration view the Delta as a colony," she emphasized.

Officials from the Metropolitan Water District (MWD), one of the districts that has been promoting the construction of the tunnels, defended the targeting of Delta farmers as part of a "normal planning process."

"Planning for right-of-way needs, that is the key part of your normal planning process," said Roger Patterson, assistant general manager for the Metropolitan Water District of Southern California, told the Associated Press.
(http://www.usnews.com/news/us/articles/2015/08/17/records-california-plans-taking-land-for-huge-water-tunnels)

In addition to identification of 300 parcels to be "acquired" through eminent domain, the tunnels opponents also noted that released documents reveal that DWR and the tunnel promoters will "cease all outreach to the Delta as a cost saving measure while issuing multi-million dollar no-bid contracts to oversee the construction of a project that will dewater the estuary."

In an apparent attempt to avoid public comment and scrutiny, the property plan states: “All transactions are conducted, reviewed and approved internally by DCE staff and managers to maintain control and avoid unnecessary delays to schedule. DCE shall seek to minimize external review and approval requirements."

“The most disturbing aspect of the documents are that the Brown Administration and water exporters don’t trust Californians,” said Conner Everts with the Southern California Watershed Alliance. “Why do they feel the need to “fool” Californians? To advance their deeply flawed multi-billion-dollar tunneling experimental export plan.”

“Plus, Metropolitan Water District this coming Monday is once again moving forward with a continuing parcel tax to burden property tax payers. What will these new taxes be used for--this massive tunneling experiment?” Everts asked.

A letter from the San Diego County Water Authority to the Metropolitan Water District discussing this parcel tax can be found here: http://restorethedelta.org/wp-content/uploads/2015/08/2015_08_15-Board-Item-5G-2-Ad-Valorem-Tax-Final.pdf

Attorney Thomas H. Keeling, who has represented landowners in this litigation, said this confidential draft "confirms my concerns about the magnitude of the assault on private property interests in the Delta and disruption to Delta life as a result of the proposed project."

“Like every other aspect of the tunnels scheme, taxpayers, landowners, and Delta communities in general will pay the heavy price for a project that will line the pockets of a few private interests south of the Delta without delivering anything of value to California,” stated Keeling.

Recent documents received in a separate Public Records Act request also shed a light on the Delta Design Construction Enterprise (DCE) created by DWR. The agency awarded an $11.4 million no-bid contract to the Hallmark Group, headed by Chuck Gardner, to direct the DCE that was signed in 2013, according to the tunnels opponents.

The DCE is housed within the Department. “Claiming, but not specifying the loophole through which they awarded the contract, DWR gave this contract to a contractor who heads a small water policy firm, rather than an engineering firm, with no listed experience in managing large water construction contracts or large experimental tunneling projects specifically," said Barrigan-Parrilla.

She said the Hallmark Group, under the banner of the DCE, is now the group “creating, planning and executing this secret land acquisition plan in the Delta.”

According to the Hallmark Group website, "Mr. Gardner has over 30 years of program management, organizational leadership and strategic planning experience. As a project turnaround specialist, Mr. Gardner has been brought in to direct capital projects struggling with funding, scheduling, and leadership challenges. His projects include a wide range of complex and politically sensitive programs that require creative collaboration with local and national government entities including influential public stakeholders.

Mr. Gardner’s most recent project is the Delta Habitat Conservation Conveyance Program; a program to provide a more reliable water supply to over 25 million California residents and restore vast areas of natural habitat located in the California Delta.” (http://hgcpm.com/leadership/)

Barrigan-Parrilla commented, "This is the second largest public works project in California history and yet Gardner is not an engineer. There seems to be a real lackof qualifications in the private contractors that are embedded with the Department of Water Resources on this project."

She noted that DWR's mission is: "to manage the water resources of California in cooperation with other agencies, to benefit the State's people, and to protect, restore, and enhance the natural and human environments."

"These 'confidential' documents' reveal that DWR is not fulfilling the mission of the agency - they are working solely for the interests of the water contractors,” said Barrigan-Parrilla.

In the big picture, these documents expose the complete capture of the regulatory apparatus - DWR and other state agencies - by the regulated - corporate agribusiness, MWD and the water contractors. This regulatory capture is precisely what has led to the dramatic of Central Valley steelhead, Sacramento River Chinook salmon, Delta and longfin smelt and other fish species in recent years, due to massive water exports from the Delta and declining water quality.

For the complete news release with links to the documents, goto: http://restorethedelta.org/blog/delta-tunnels-confidential-documents-reveal-state-plans-take-delta-farms/#background