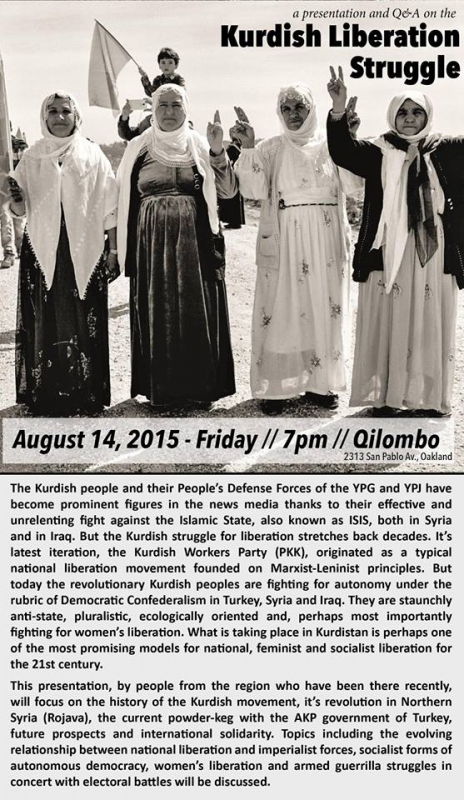 The Kurdish people and their People’s Defense Forces of the YPG and YPJ have become prominent figures in the news media thanks to their effective and unrelenting fight against the Islamic State, also known as ISIS, both in Syria and in Iraq. But the Kurdish struggle for liberation stretches back decades. It’s latest iteration, the Kurdish Workers Party (PKK), originated as a typical national liberation movement founded on Marxist-Leninist principles. But today the revolutionary Kurdish peoples are fighting for autonomy under the rubric of Democratic Confederalism in Turkey, Syria and Iraq. They are staunchly anti-state, pluralistic, ecologically oriented and, perhaps most importantly fighting for women’s liberation. What is taking place in Kurdistan is perhaps one of the most promising models for national, feminist and socialist liberation for the 21st century.

This presentation, by people from the region who have been there recently, will focus on the history of the Kurdish movement, it’s revolution in Northern Syria (Rojava), the current powder-keg with the AKP government of Turkey, future prospects and international solidarity. Topics including the evolving relationship between national liberation and imperialist forces, socialist forms of autonomous democracy, women’s liberation and armed guerrilla struggles in concert with electoral battles will be discussed.

END_OF_DOCUMENT_TOKEN_TO_BE_REPLACED
Added to the calendar on Sat, Aug 8, 2015 3:25PM
Add Your Comments
Support Independent Media
We are 100% volunteer and depend on your participation to sustain our efforts!