Sacramento activists sing "No Fracking No Way" at protest

by Dan Bacher
People gathered at 18 coordinated "Clean Not Extreme" events that were a part of a statewide day of action following the release of a statewide study on fracking and oil well stimulation in California. These actions demonstrated mounting public opposition to fracking and other extreme oil extraction methods and increasing support for a pathway to 100% clean energy, according to Californians Against Fracking.

Photo of Raging Grannies singing in front of the Department of Conservation by Dan Bacher. 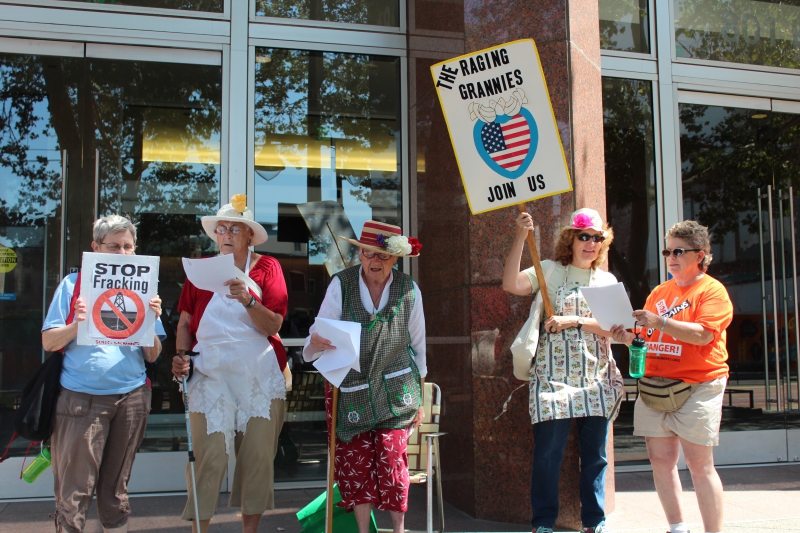 The Sacramento Chapter of "System Change Not Climate Change" held a protest, featuring the "Raging Grannies" singing their songs calling on the Brown administration to end fracking now, on August 1 at 11 am at the California Department of Conservation office in Sacramento.

People gathered at 18 coordinated "Clean Not Extreme" events that were a part of a statewide day of action following the release of a statewide study on fracking and oil well stimulation in California. These actions demonstrated mounting public opposition to fracking and other extreme oil extraction methods and increasing support for a pathway to 100% clean energy, according to Californians Against Fracking.

"We are in the front of the Department of Conservation today to protest fracking, since this agency is the one that regulates fracking in California," said Chris Hodges, Sacramento organizer of "System Change Not Climate Change. "The Department has the authority to stop all fracking in the state."

He pointed out that fracking, an extreme method of oil and natural gas extraction, adversely impacts the air and water quality of California at a time when the state is suffering from extreme drought. The fracking process yields toxic wastewater after a mixture of toxic chemicals and water is used to fracture the shale to extract the oil and bring it to the surface.

"The state of New York, after publishing a 160 page report documenting the dangers of fracking to water, air and human health, has banned fracking," he said. "Governor Jerry Brown should do the same as New York Governor Andrew Cuomo and ban fracking also."

Hodges noted, "We hope this demonstration is but the first of many such anti-fracking demonstrations to be held by System Change Not Climate Change (and any other sympathetic persons, and organizations) and we hope it or similar demonstrations will be held on a regular monthly basis until fracking is an outlawed practice in the State of California."

At Lake Merritt in Oakland on Saturday, Alameda County families and residents entered the ring and delivered a round of "jabs, right hooks and upper cuts" to the oil industry to demand clean, not extreme energy, in Alameda County and across California, according to a statement from Food and Water Watch.

The “Knock Out Oil” rally and performance saw kid superheroes in bright orange capes teamed with adults dressed as grapes and a solar panel to topple over a fracking rig in a street theater boxing ring.

"The action offered residents a light-hearted way to speak out for urgent action to protect public health, water and the climate from the risks inherent in fossil fuel extraction," said Ella Teevan of Food and Water Watch. "The crowd of several dozen issued a resounding call to Gov. Jerry Brown and the Alameda County Board of Supervisors to ban fracking and extreme extraction."

“We knocked out oil today, and we call on the Alameda Board of Supervisors to do the same by passing a countywide ban on fracking and extreme oil extraction,” said Ashley Cupp, an Alameda County campaigner with Food & Water Watch. “In the absence of statewide leadership to protect California from the dangers of drilling, it is up to local elected officials to take the lead. We urge the Alameda County Board of Supervisors to do what Governor Brown hasn’t: ban fracking and other dangerous drilling as the first step toward a renewable energy future.”

“Governor Brown says science must guide decisions on fracking, and scientists tell us that fracking pollution threatens the water we drink and the air we breathe,” Wolf said in a press release from Californians Against Fracking. “Extreme oil extraction in California uses incredibly hazardous chemicals near our precious water supplies. Air pollution from fracking and drilling endangers the health of millions of Californians living near oil and gas wells. It’s time for the governor to protect our state by stopping the oil industry from using fracking and other toxic techniques.”

Earlier this month, an independent scientific study by the California Council on Science and Technology (CCST) outlined serious risks associated with oil development processes and concluded that state regulatory officials lack data to adequately protect the public or even to propose effective mitigation strategies to avoid associated health risks, according to Wolf. (http://documents.latimes.com/study-hydraulic-fracking/)

In an opinion piece in the Sacramento Bee, Catherine Reheis-Boyd, the President of the Western States Petroleum Association (WSPA) and the former Chair of the Marine Life Protection Act (MLPA) Initiative Blue Ribbon Task Force to create so-called "marine protected areas" in Southern California, claimed, "For those in the oil industry – or who value energy independence and domestic production – the council’s report provides validation that we are doing things right in California." (http://www.sacbee.com/opinion/op-ed/soapbox/article29170207.html)

"After decades of using hydraulic fracturing and other oil production technologies under some of the most stringent regulations in the world, the council was unable to find any evidence these technologies have harmed the environment," she said.

However, Californians Against Fracking, in their response to the study, released their "Top 10 Reasons to Ban Fracking" that strongly contest oil industry claims that the report provides "validation" that the oil industry is "doing things right in California." Cited with page numbers and direct quotes from the study, the independent scientific analysis clearly demonstrates the serious risks associated with drilling, fracking and well stimulation. (http://californiansagainstfracking.org/wp-content/uploads/2015/07/10-Reasons-to-Ban-Fracking-in-CA-final-with-logo.pdf)

"The CCST study concludes that operations close to neighborhoods present substantial public health concerns, including risks to children, pregnant women, the elderly, and those with pre-existing health conditions. It also concludes that the sheer number and toxicity of chemicals used in fracking and extreme extraction fluids make it impossible to quantify the risks to the environment and human health, thereby making human beings lab rats in California’s fracking experiment," according to the coalition.

"The recent study by the California Council on Science and Technology only verifies what we’ve known all along: fracking and drilling threaten our water, our food, our health and our future," said Adam Scow, California Director with Food & Water Watch. “It’s beyond time for Governor Brown to protect Californians from these risks by banning fracking and other dangerous drilling as the first step toward a renewable energy future."

“The release of the CCST report highlights a critical decision point for Governor Jerry Brown. Now that the science is in, he can either choose to stop fracking and dangerous oil extraction, or allow it to continue and knowingly put Californians at risk,” said David Greenson, Rootskeeper, one of the organizers of the event.

In the absence of statewide action by Governor Brown and other regulators to protect public health and the climate, communities across the state facing the threat of expanding oil development are taking steps to protect themselves, the group said.

In 2014, Santa Cruz and Mendocino counties joined the city of Beverly Hills in passing measures to ban fracking and similar oil extraction techniques. San Benito County voters also approved a fracking ban with a 59 percent majority, despite a $2 million opposition campaign by the oil industry. In March, voters in Hermosa Beach stopped one company’s attempt to expand oil drilling in their community.

Big Oil is the largest corporate lobby in California. Big Oil spent an amazing $266 million on lobbying and election campaigns from 2005 to 2014, according to an analysis of California Secretary of State data by StopFoolingCA.org, an online and social media public education and awareness campaign that highlights oil companies’ efforts to “mislead and confuse Californians.”

For more information, go to: http://www.eastbayexpress.com/SevenDays/archives/2015/07/29/californias-biggest-secret-oil-industry-capture-of-the-regulatory-apparatus

Californians Against Fracking is a coalition of about 200 environmental business, health, agriculture, labor, political and environmental justice organizations working to win a statewide ban on fracking and other dangerous extraction techniques in California. Follow @CAagainstFrack on Twitter or go to: http://californiansagainstfracking.org/
§Ellen and Joan
by Dan Bacher 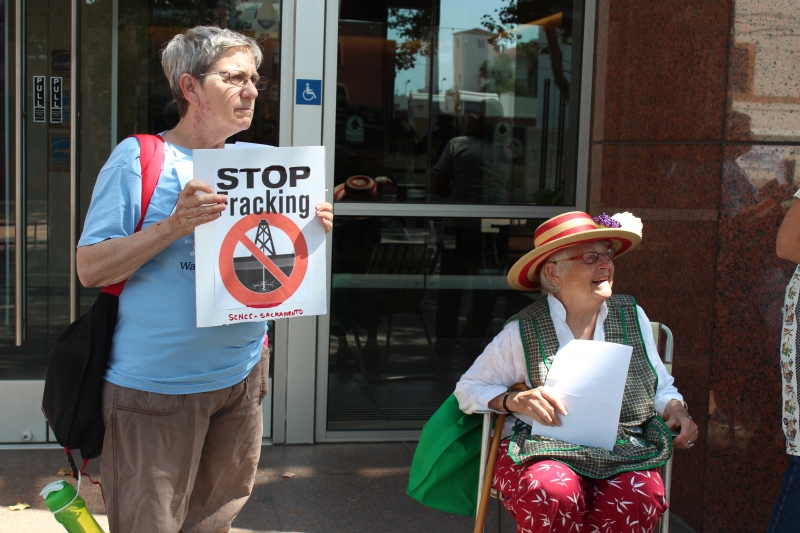 original image (5184x3456)
Ellen Schwartz and Joan Kelly of the Raging Grannies at the anti-fracking protest in Sacramento.
§Californians Against Fracking
by Dan Bacher 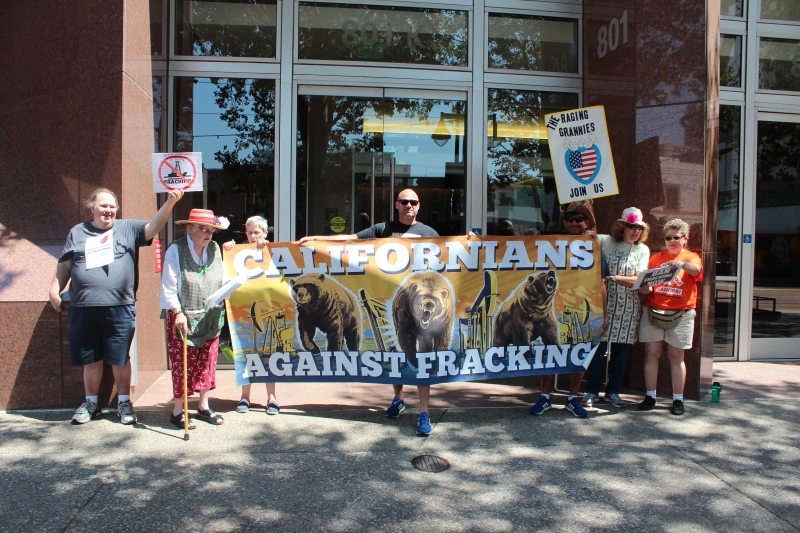 original image (5184x3456)
Californians Against Fracking and Sacramento area activists joined to protest fracking in front of the Department of Conservation Offices. Photo by Dan Bacher.
Add Your Comments
Support Independent Media
We are 100% volunteer and depend on your participation to sustain our efforts!