by Alex Darocy (alex [at] alexdarocy.com)
Community members protesting local laws that criminalize homelessness held their third group campout at Santa Cruz City Hall on July 26. Several dozen people slept in the City Hall courtyard from sunset until the following morning, when they were greeted with a large buffet-style breakfast served by a fresh-faced group. Organizers have more sleep-ins planned for the future, with the next confirmed for Sunday, August 2, again at Santa Cruz City Hall. 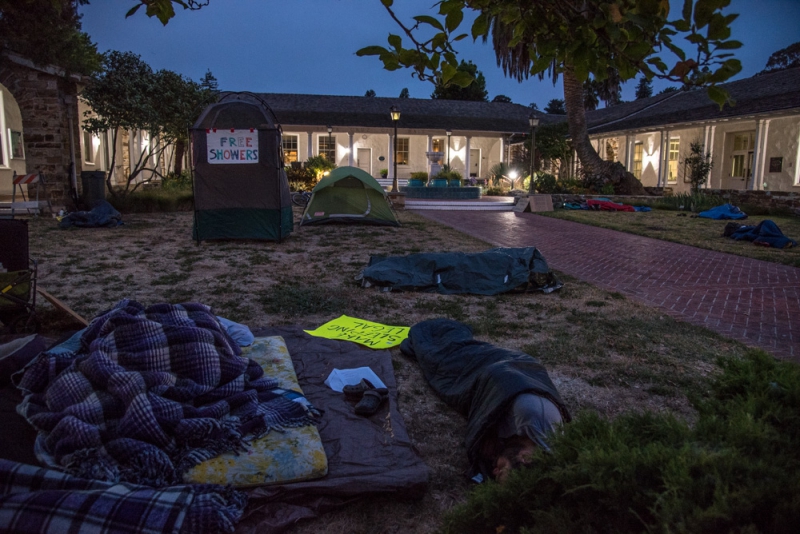 original image (1000x668)
The July 26 sleep-in was preceded by campouts held on July 4 and July 19, which were organized after the Homeless Services Center (HSC) announced in June it was having severe budget issues and would be losing a significant amount of state-administered federal funding. As a wide variety of day services were being discontinued, a coalition of homeless rights groups joined together to host a series of free breakfasts next to the center. The City Hall campouts were the next step in the response, and are now focused on the broader issues surrounding the criminalization of homelessness.

Participation at the community campouts is an act of civil disobedience because it involves the violation of multiple local ordinances that outlaw sleeping in public.

For one, the court yard at City Hall is closed to the public between the hours of 10pm and 6am, however the primary ordinance in the Santa Cruz municipal code focused on at the protests has been the camping/sleep ban. The camping ban prohibits sleeping in public with or without setting up bedding in the City of Santa Cruz between the hours of 11pm and 8:30am, and the ordinance also criminalizes sleeping in cars.

On July 26, protesters slept at City Hall in a variety of manners.

Some slept on the court yard's lawn and some slept on the sidewalk. Some slept in tents, some slept out in the open in sleeping bags, and some used blankets on top of tarps. Some sat in chairs and slept with blankets draped over their bodies. One person used no bedding at all as she lay on the rock wall that surrounds the City Hall courtyard. At least one person slept in an automobile.

Some of those who slept during the protest had houses of their own. Some were homeless.

In the morning, many people expressed that they had received a good night's sleep.

The two previous sleep-ins at City Hall were subject to visits by large groups of officers with the Santa Cruz Police Department, who attempted to disperse the protests on both occasions by issuing citations to those who would not leave City Hall.

There were no attempts by police, however, to break up the campout on July 26, which was most likely due to the large police response that was required by the community tragedy that had begun to unfold earlier in the day when eight-year-old Madyson Jordan Middleton was reported missing in downtown Santa Cruz. Printed flyers with missing person information made their way to City Hall, and the community campout group posted one on the van they rented to store food and supplies.

One individual who said he was homeless arrived at City Hall at 2am to sleep at the campout. He described how he had spent the entire evening searching near the San Lorenzo River and other locations for the missing girl. He said that because he had spent so much time being homeless downtown, he was very well acquainted with the area. He was very distraught he had to end his search early due to the fact he had nowhere to store his personal belongings. He had been carrying all of his possessions for hours by hand in a folded tarp as he searched for Madyson.

After talking about the search for the missing girl for some time, he eventually moved to a location in the City Hall court yard where he slept for a few hours until daylight when the sound of rising campers woke him up.


For more information about the Community Sleepouts, see: 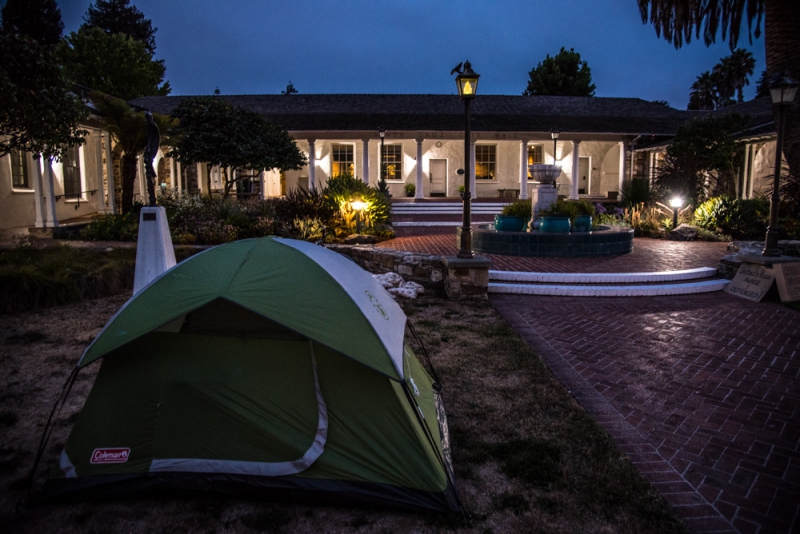 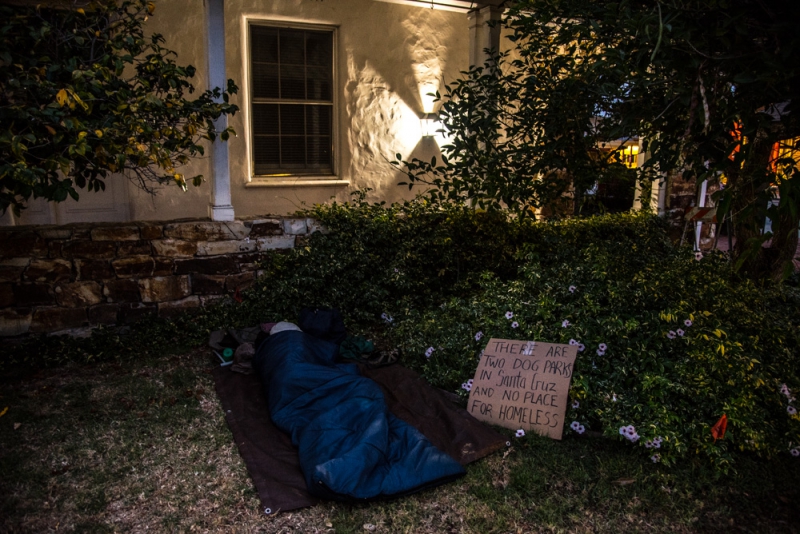 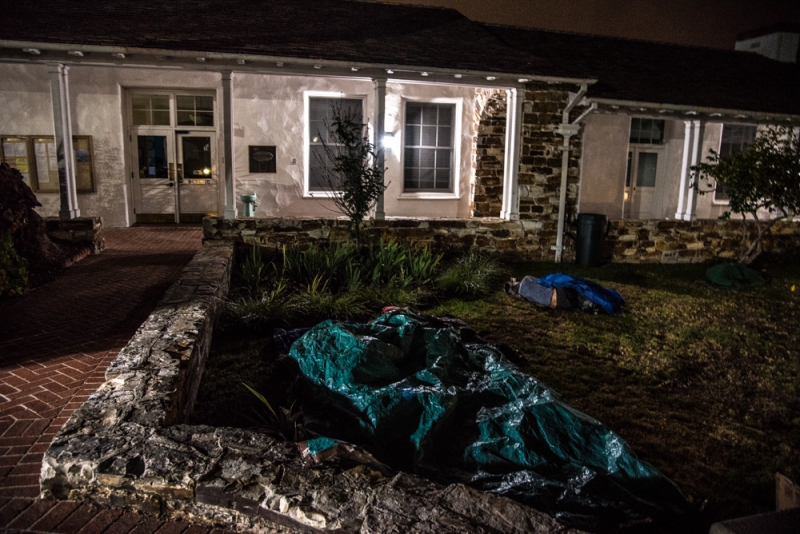 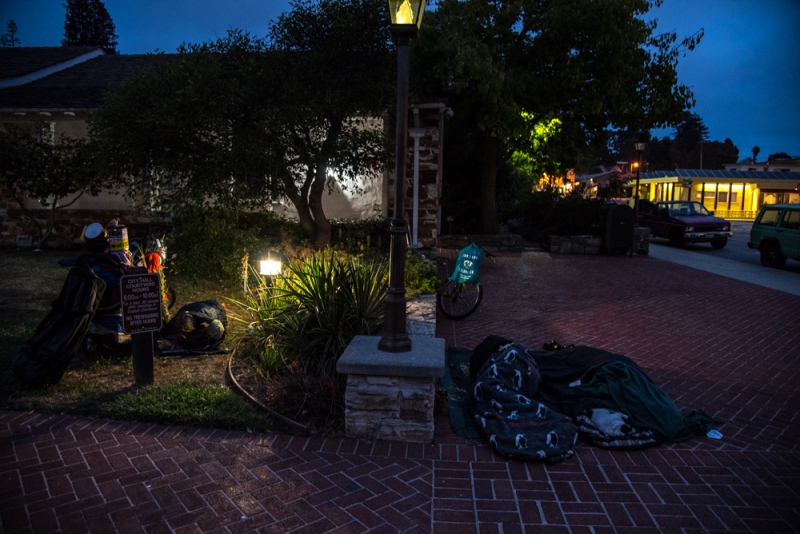 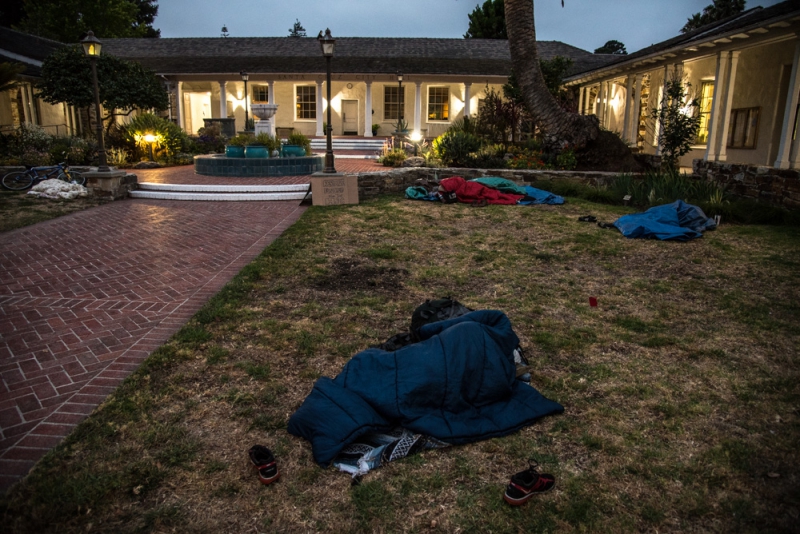 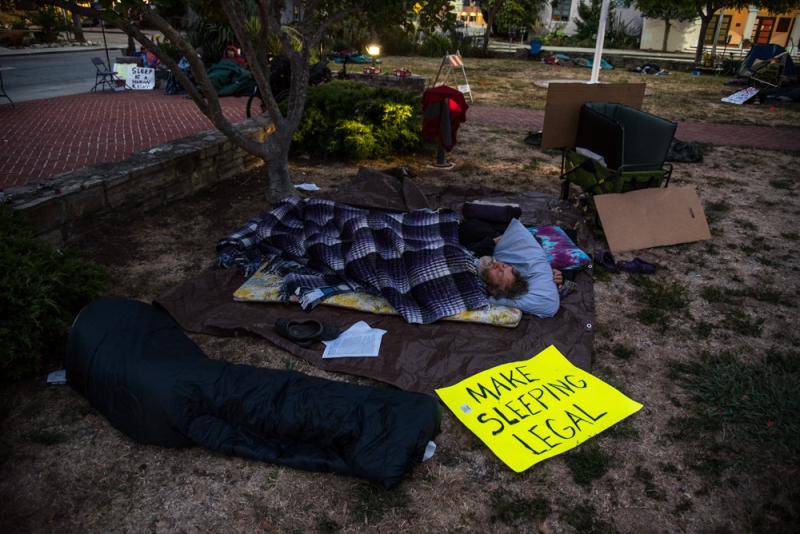 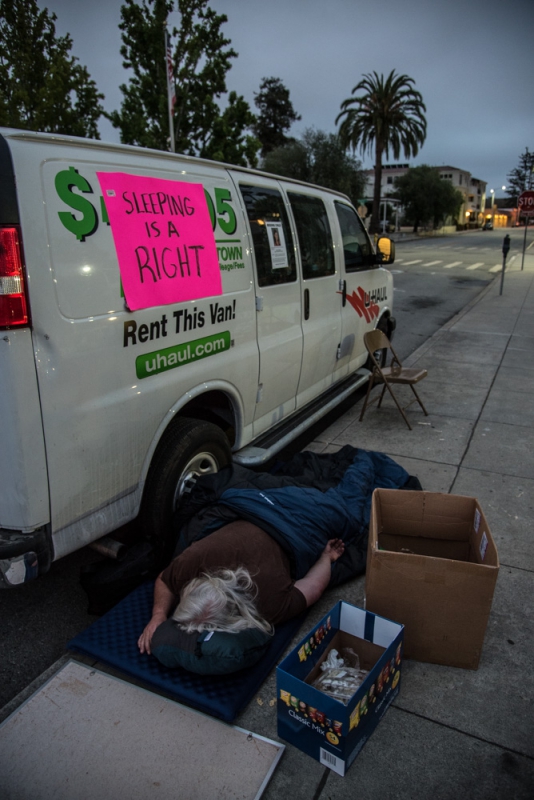 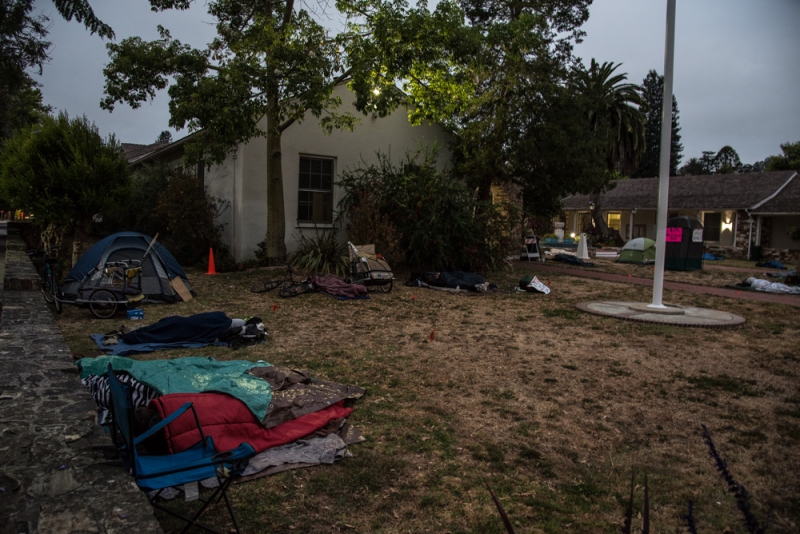 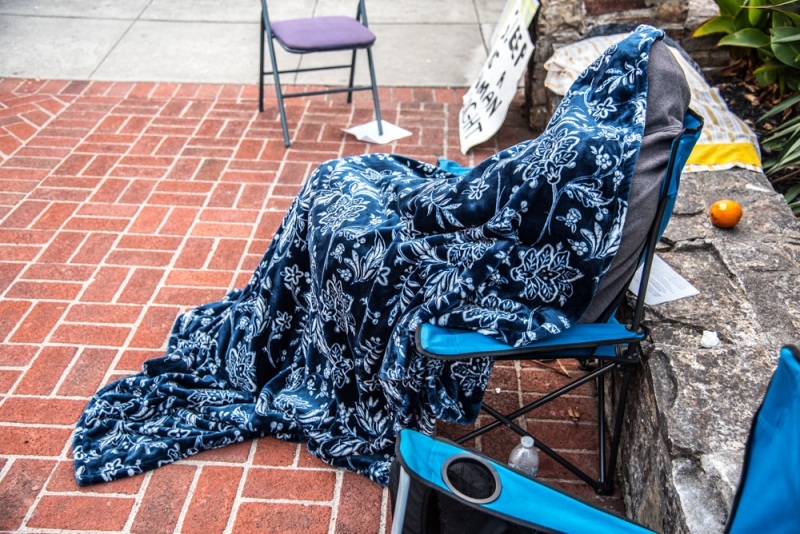 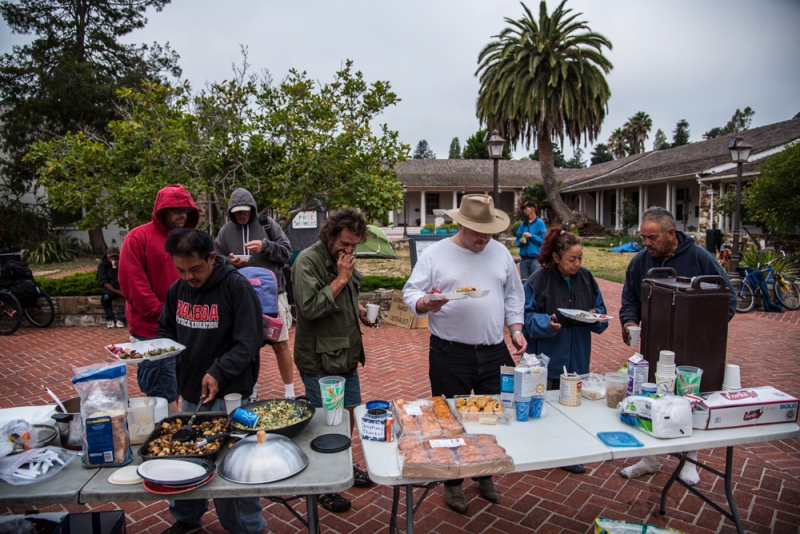 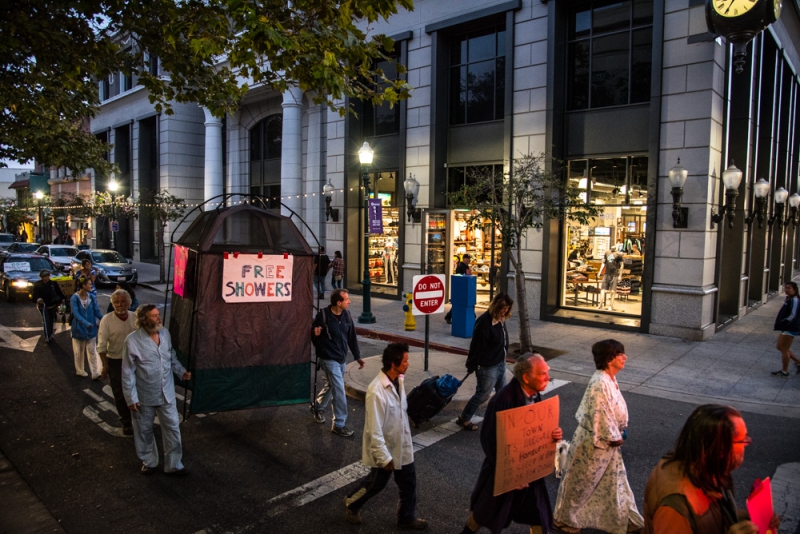 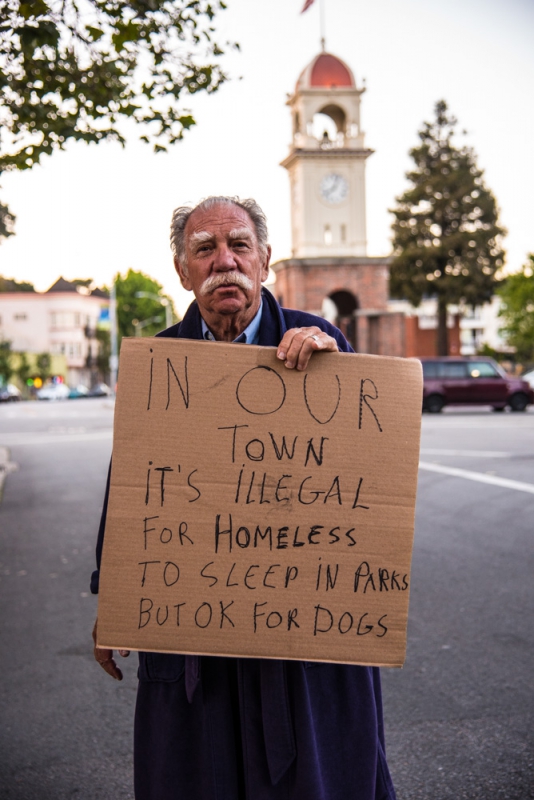 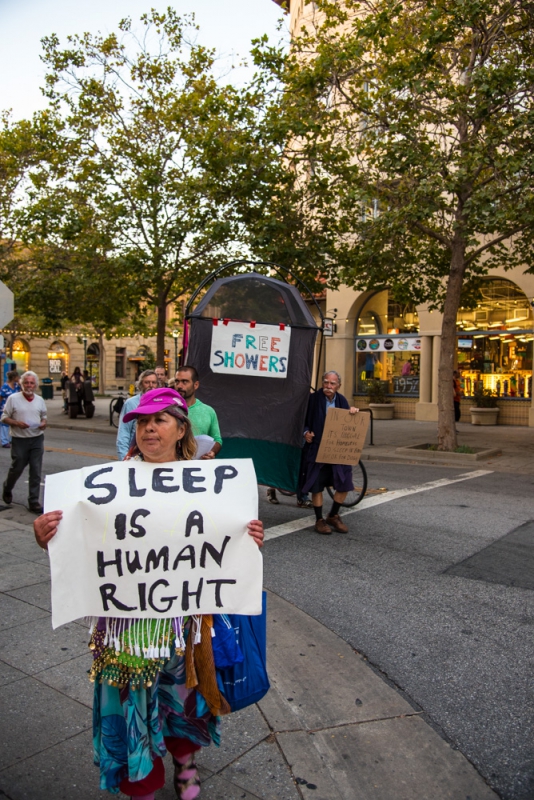 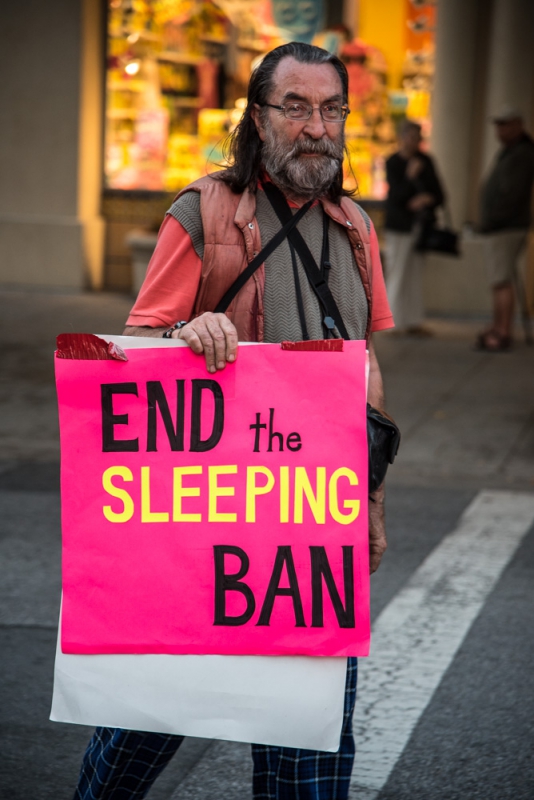 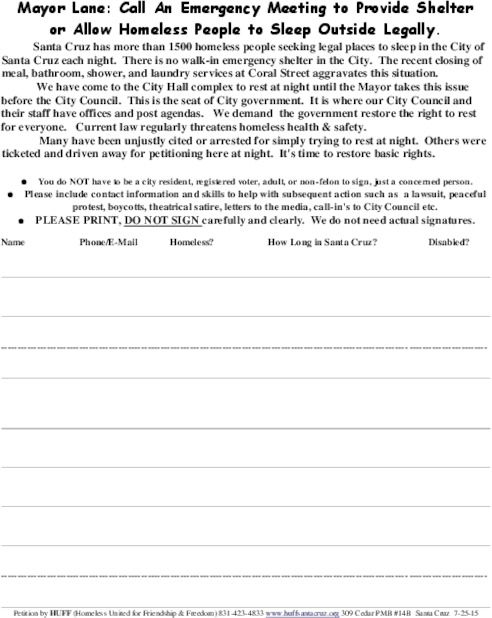 Download PDF (121.1KB)
Thanks to Alex, yet again, for not just covering the event, but weathering the night outside himself to get the story.

Neither as wet as the night of the first sleepout, nor as balmy as it was during the second event, the weather held clear and brisk. Several of us slept in our cars nearby and weren't bothered or ticketed by police.

A First Alarm security guard did attempt to roust the protest, but was rather loudly denounced and then videoed by some of the protesters who objected to the "wake up and get out" threats. The guard (who gets over $20 an hour for this job) tried to stop our videoing and audioing him, but eventually fled as visiting UCSC videlojournalists caught him in in Klieg lights for better video coverage. He returned briefly to make a show of calling the police, claiming he was being threatened by "illegal photographing". Police came briefly and interviewed hm, but never disturbed the sleepers.

Many sleepers had protest signs next to them, to advise police they were at their City Hall to petition the government for redress of grievances. I also brought along the attached petition--which I'll be circulating again at the 4th protest tomorrow night.

Folks are encouraged to phone City Council at 831-420-5020; e-mail them at citycouncil [at] cityofsantacruz.com, or ask a Councilmember why they wish to continue to disgrace Santa Cruz with the Sleeping Ban . Or grab a blanket, a sleeping bag, and a sign and come on down! Between protests, carry a video device with you and immediately record any harassment activity by police, rangers, or private vigilantes.
Add a Comment
§Es preciso abolir este sistema inhumano
by Truman Show
Toda mi solidaridad con los sin techo. Por cierto:
¿A ver si adivináis en que bananero reino pueden instalarte sistemas de videovigilancia y PRIVARTE DEL SUEÑO EN TU PROPIO HOGAR, haciendo ruido deliberadamente, incluso en las horas destinadas al descanso?
Add a Comment
§support your local rabbi
by reporter
rabbi posner is a shining example for city council members. they could learn morality and humility from him.
Add a Comment
Support Independent Media
We are 100% volunteer and depend on your participation to sustain our efforts!