Photo: Chief Caleen Sisk at the protest against the Delta Tunnels in front of the Sheraton Grand Hotel in Sacramento on July 28. Photo by Dan Bacher. 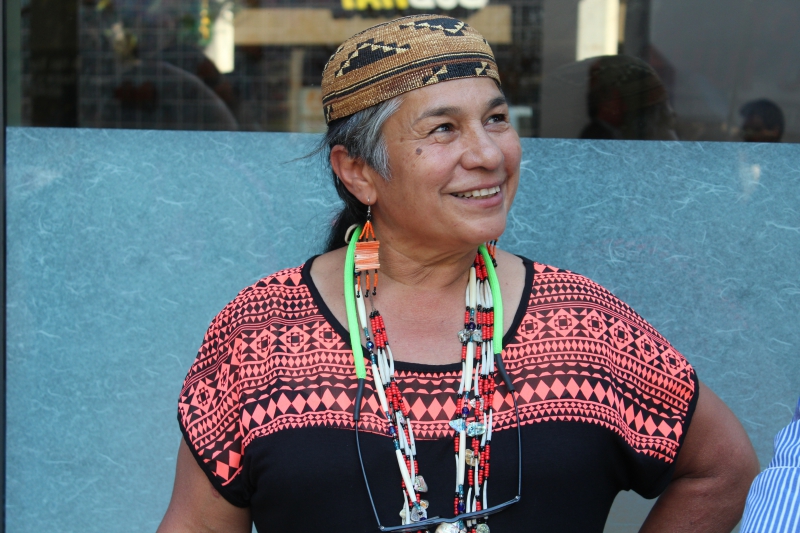 As consultants and state and federal officials promoting the Delta tunnels used poster displays to tout the alleged benefits of Jerry Brown’s project, Stockton activist and performer Jonathan Michelsen stood up on a chair with his guitar in the dark ballroom of the Sheraton Grand Hotel in Sacramento and began belting out his song, “Sanctuary.”

As he continued singing the song over and over, a crowd of tunnels opponents, many of whom had come on buses from Stockton, the Delta and the Bay Area, began to gather around. They began clapping and singing along to the lyrics.

The consultants and officials around the room at the California Water Fix “open house” in Sacramento on July 29 seemed amused by the song and didn’t stop him from singing. After he played the song for several exciting moments in the otherwise sedate and bureaucratic affair, he got down off the chair.

“We must be bold. We have our home here in the Delta. We must stand up for what belongs to us. It is our land, our crops and our fish,” he told me in a short interview.

“As a Christian, I am called to give witness to the persecuted around the earth,” he added.

Michelsen is a music teacher at Delta College and had joined Restore the Delta and other tunnel opponents last year at protest against the project at the State Capitol. He performs regionally, nationally and internationally.

Surrounded by posters around the room touting the alleged ecological and water supply benefits of the California Water Fix, Michelsen said, “The tunnels only take away from the natural ecosystem, not restore it.”

The state and federal agencies organized the “open house” for the review of Delta Tunnels EIR/EIS (formerly known as the Bay Delta Conservation Plan.) The Department of Interior and California Natural Resources Agency recently divided the project into two parts - the tunnels component, the California Water Fix, and the habitat "restoration" component, California Eco Restore.

The agencies promoting the project made no formal presentation to the public and set no time aside for the public to express their concerns in a community setting. Instead, the set up the "open house" like a science fair, with the public moving from one exhibit to the next.

Some took advantage of a chance to give a comment to the court reporter in attendance. Others at the event handwrote their comments on forms provided by the agencies.

As Michelsen performed and others wrote their comments on forms, other Delta advocates gathered with a variety of colorful signs and props on the sidewalk in front of the hotel to protest the tunnels plan. The protesters included Delta farmers and residents, fishermen, Winnemem Wintu Tribe leaders, local environmental activists and others concerned about the fate of the largest estuary on the West Coast of the Americas.

Karen Cunningham, a Delta cattle rancher on Bradford Island, said, “The tunnels will destroy the ecosystem and take three-quarters of the fresh water out of it. They will be bad for fish, otters, turtles, since they need fresh water. So do the farmers and ranchers.”

She has already been impacted by ecological changes on her property, a result of the construction of the False River Barrier. For example, she said the area where her and her family normally catch bluegill now has a current that is too strong for panfish to hold.

In addition, she noted that if the tunnels are built, you can expect the same lack of concern for endangered species that the state has shown when it put in the False River Barrier.

“We saw how the state acted when I found five endangered Giant Garter Snakes while the Department of Water Resources (DWR) was installing the barrier this year,” she said. “I tried to speak to a biologist on the project site, but my phone calls never resulted in a scientist coming out to the site. This is just an inkling of what will happen if the tunnels project is built.”

In addition to driving salmon, Delta smelt and other species closer to extinction, the tunnels project also violates tribal rights, according to Caleen Sisk, Chief and Spiritual Leader of the Winnemem Wintu Tribe, who showed up with her son, Michael, and her sister, Helene, at the “open house.”

“The government has conducted no on-the-ground cultural studies, as required under Public Law 106, protecting burial sites, villages and traditional fishing areas,” said Sisk. “They are solely relying on the libraries for their information. They have not consulted with any of the Tribes. Tribes have been left out of the water process.”

She emphasized, “Right now the existing water projects continue to damage our ecology. They have already harmed our fish and driven them to extinction. The tunnels will only complete the job. The tunnels that they want to build are large enough to divert the entire Sacramento River."

“The tunnels are one key part of the plan that includes the Sites Reservoir, Shasta Dam Raise and Proposition 1,” she said.

She said the water for the tunnels would be provided by Shasta Lake and Sites Reservoir – and that to fill Sites Reservoir, the Shasta Dam would be raised to hold more water from the Sacramento River.

“This state was built for salmon, not almonds and pistachios,” Chief Sisk said. “We should base our economy on salmon. If people want to see a healthy environment and healthy watersheds, we should bring back the salmon."

“A lot of countries are now acknowledging the rights of nature. We should allow nature to have the right to support us,” she concluded.

During the protest outside of the hotel, a video crew organized by Restore the Delta interviewed people to share their actual public comments with the Secretary Jewell at the Department of the Interior and with President Obama

Speaking to the video camera, Michael Frost, Restore the Delta Board Member and recreational angler, offered a four point plan.

“First, we need to retire drainage impaired land,” he said. “Second, we need to increase freshwater flows through the Delta. Third, we must repair the levees. Fourth, we must determine the amount of water that we actually have in the system (not paper water.”

The agencies backing the California Water Fix also held an open house the following day from 3:00 pm to 7:00 pm in Walnut Grove at the Jean Harvie Senior and Community Center. A big crowd of tunnels opponents also showed up at this event to comment - and to wave signs opposing the tunnels also.

Outside of the center, members of North Delta Cares parked a boat, outfitted with fishing rods, on a trailer. They also outfitted the boat with signs protesting the tunnels.

"I placed a family standing in the tunnels to give a clear perspective of how really large the tunnels will be," he stated. "This model gives a human scale to the tunnels project."

He plans to build a full scale tunnels model - and is encouraging people to help build their own sections of the tunnels, based on his pattern, so they can be interlocked.

"I live on the river and often sit on the river and watch the water flow by in the evening," he noted. "The tunnels will have a clearly detrimental impact on the Sacramento River by pulling more water out of it."

Background: The Revised BDCP EIR/EIS at 48,000 pages of appendices, footnotes, tables, and renumbered alternatives is now open for public comment. The original 45-day comment period was met with outrage by community groups and agencies. The comment period has now been extended until October 30, 2015.

Written comments are due by close of business Friday, Oct. 30. Comments should be mailed to BDCP/WaterFix Comments, P.O. Box 1919, Sacramento, CA 95812 or emailed to BDCPComments [at] icfi.com
§Jonathan Michelsen
by Dan Bacher Thursday Jul 30th, 2015 2:36 PM 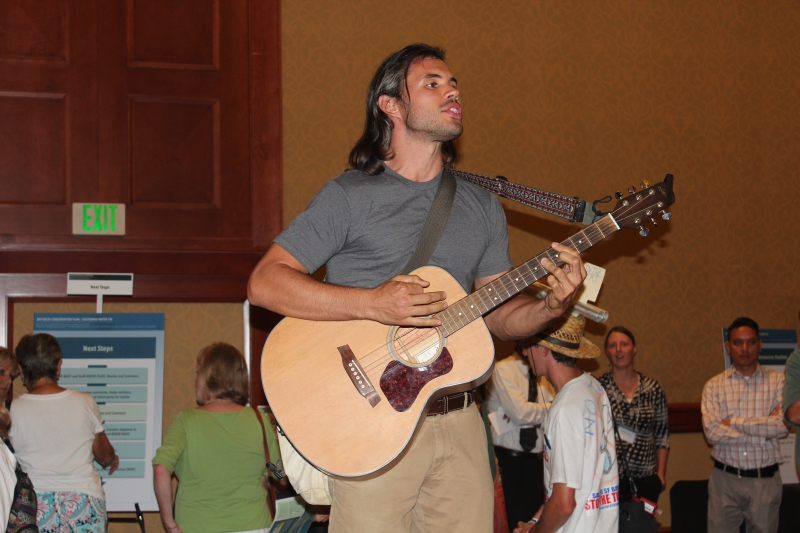 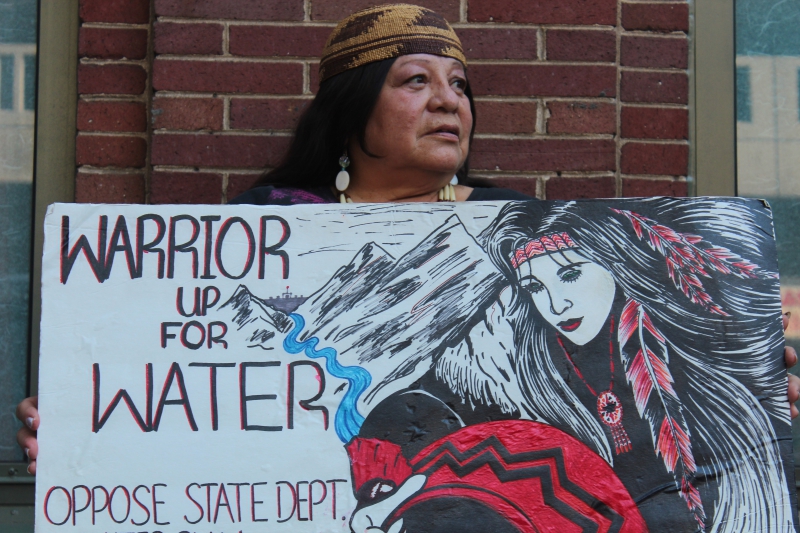 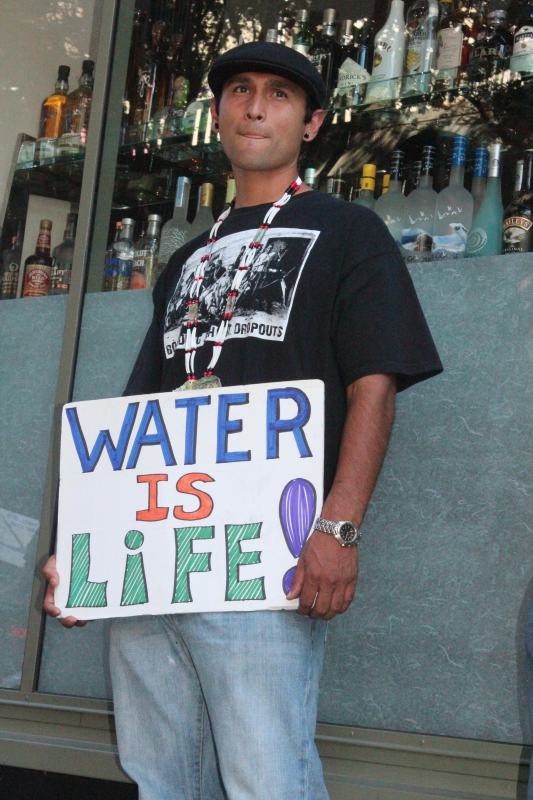 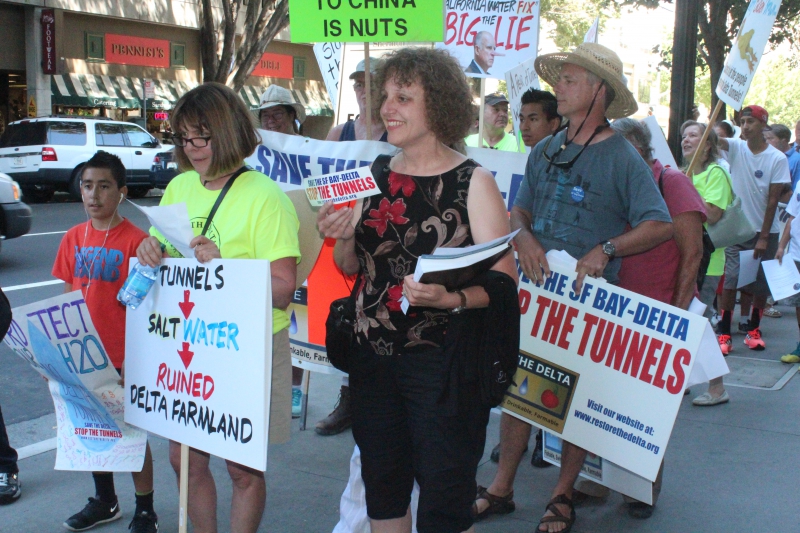 original image (5184x3456)
Delta advocates line up on the sidewalk outside the Sheraton Grand to get their comments recorded on video by Restore the Delta. Photo by Dan Bacher.
§Brown Puppet
by Dan Bacher Thursday Jul 30th, 2015 2:36 PM 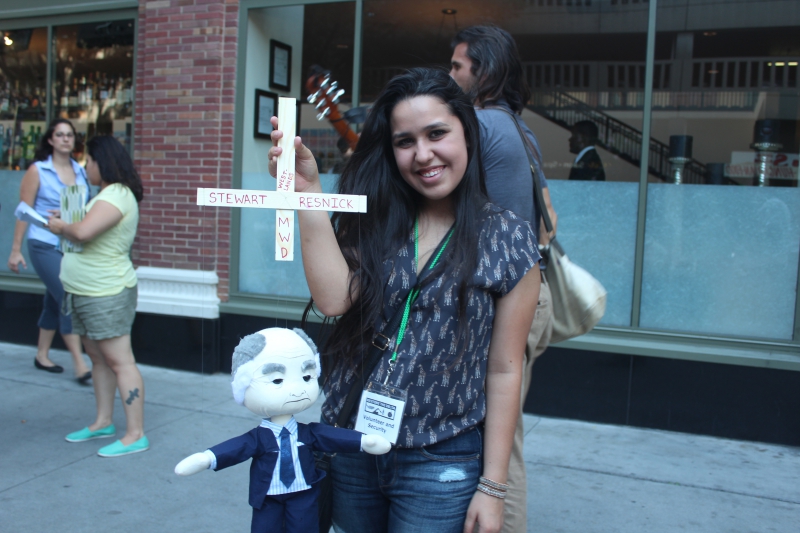 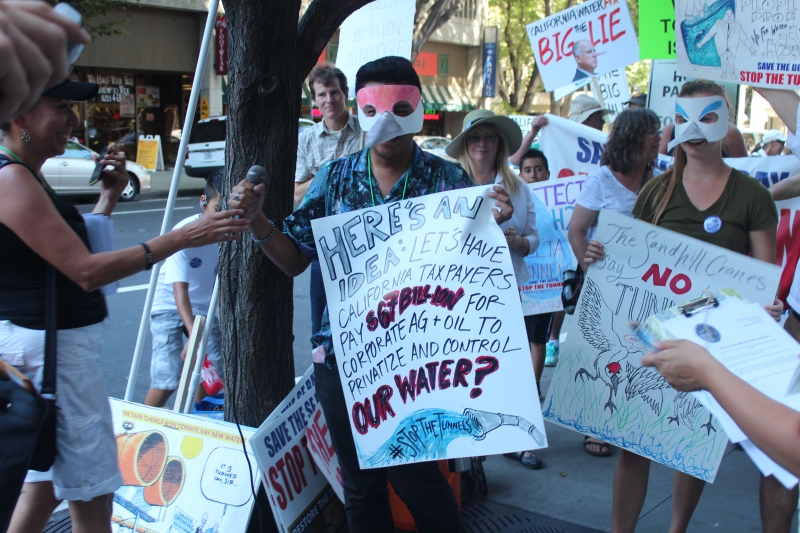 original image (5184x3456)
Ryan Camero and others speak up for the Sandhill Cranes threatened by the tunnels. Photo by Dan Bacher.
§Gary Adams
by Dan Bacher Thursday Jul 30th, 2015 2:36 PM 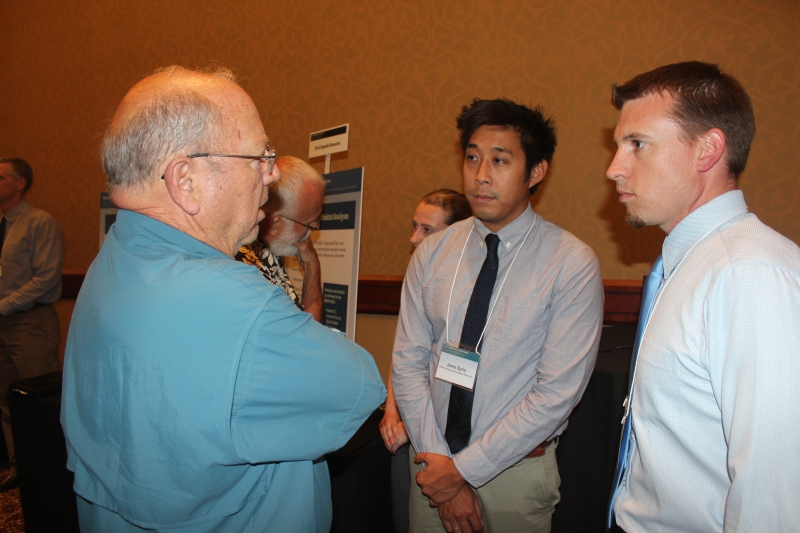 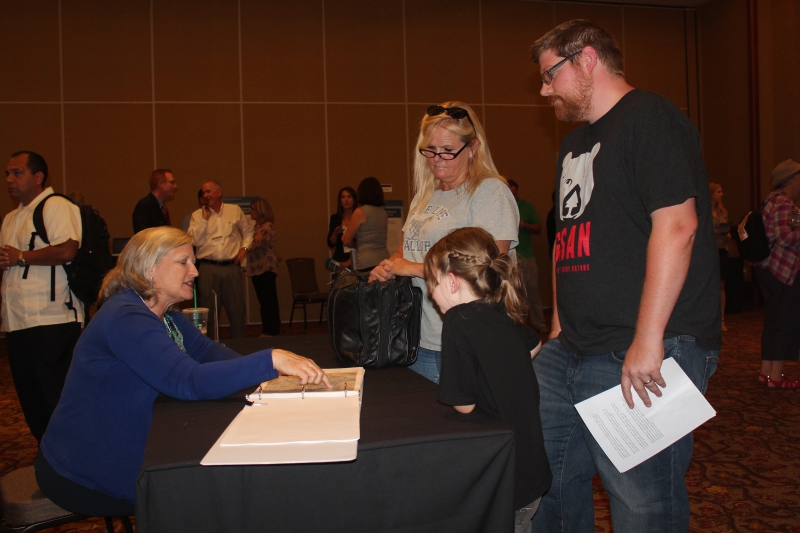 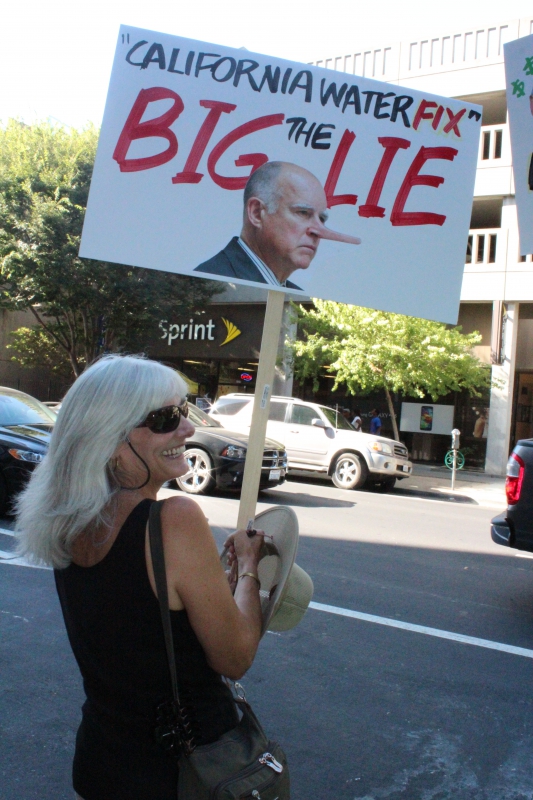 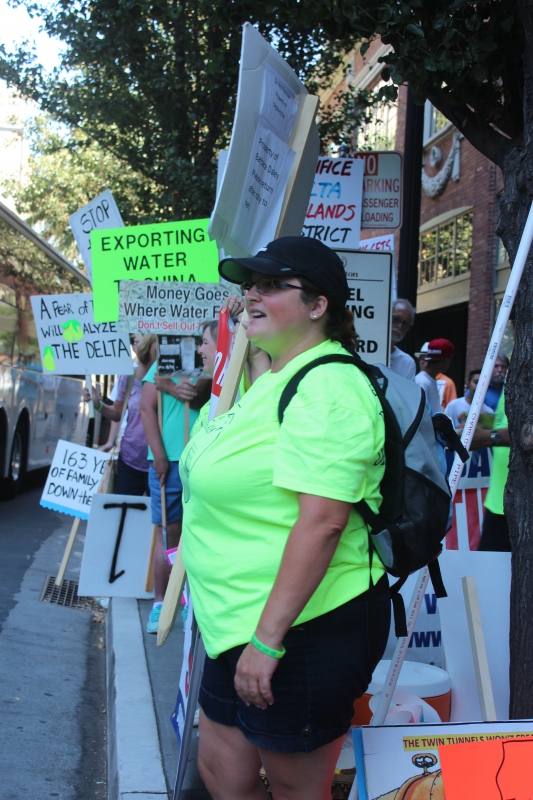 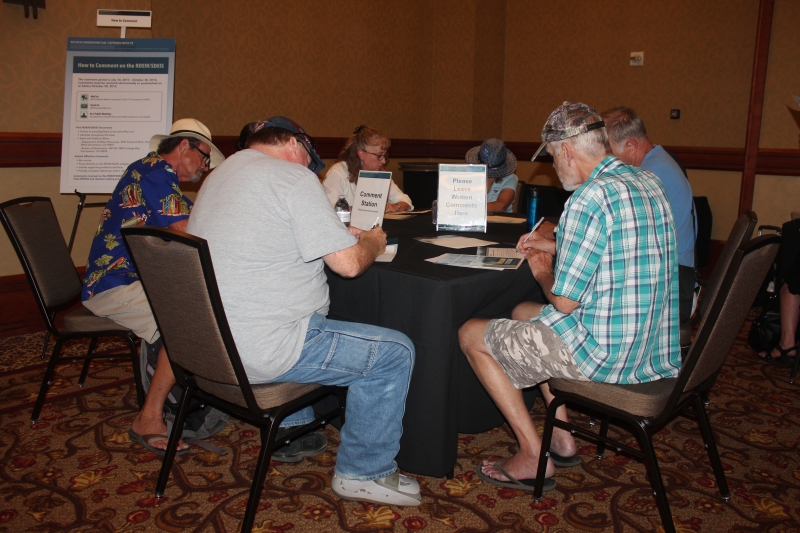 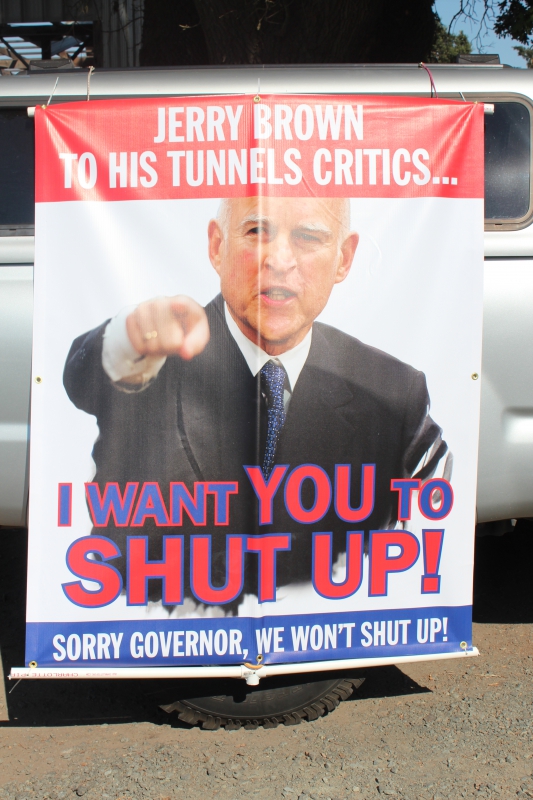 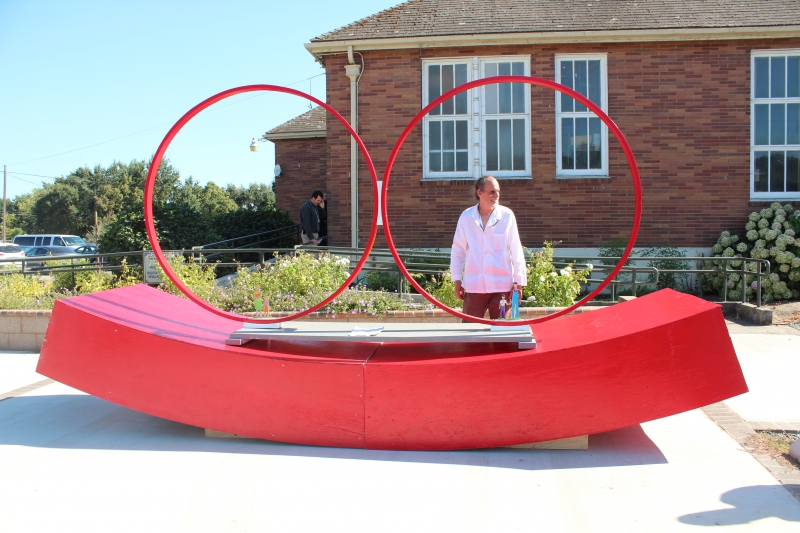 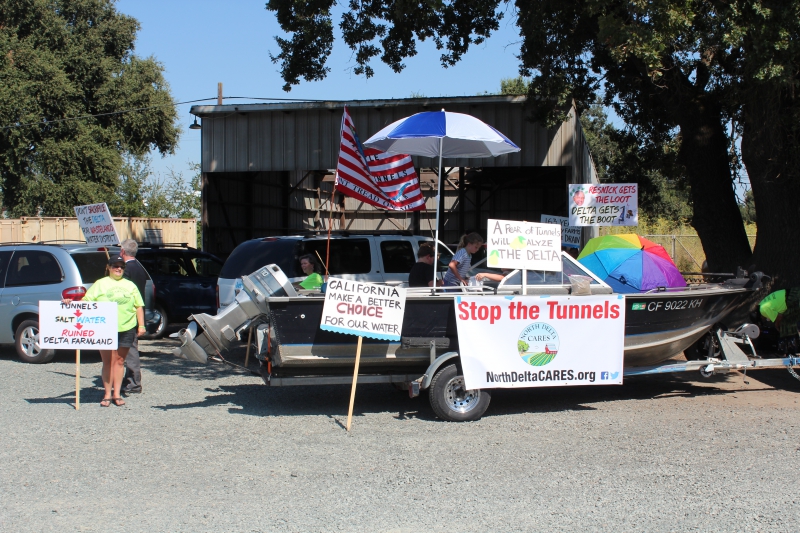 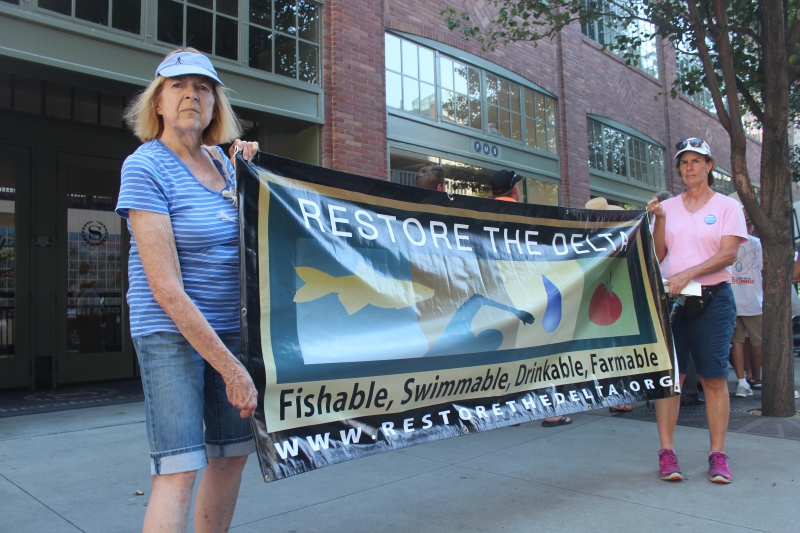 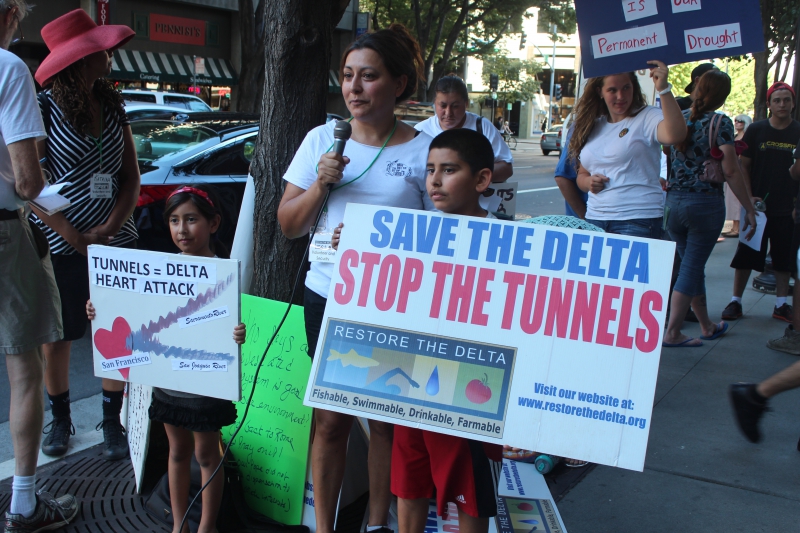 original image (5184x3456)
A family speaking out against the tunnels, a Delta "heart attack." Photo by Dan Bacherl
Add Your Comments

§thanks again
by David Roknich
Thursday Jul 30th, 2015 2:58 PM
Dan, thanks again for the sustained effort. You've been an absolute saint. I'll try to spread this a bit further on IndyRadio and elsewhere. - dave
http://ch0.us
Add a Comment
§Thanks!
by Dan Bacher
Thursday Jul 30th, 2015 3:05 PM
Thanks for the kind words. I also greatly appreciate all of your many efforts to speak out against injustice!
Add a Comment
Support Independent Media