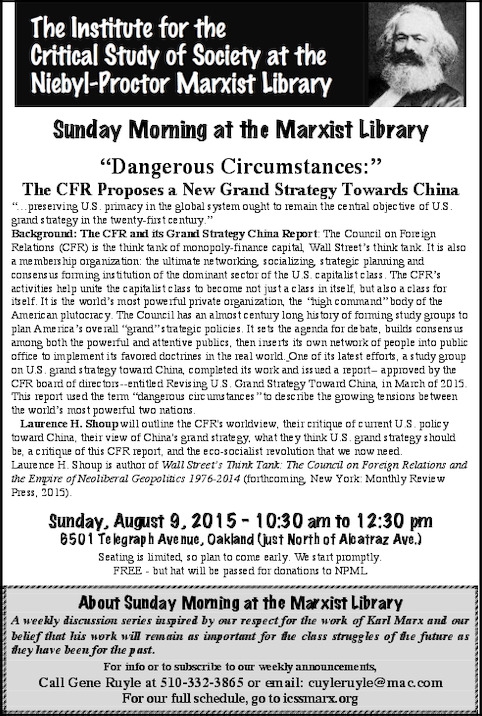 “…preserving U.S. primacy in the global system ought to remain the central objective of U.S. grand strategy in the twenty-first century.”
Background: The CFR and its Grand Strategy China Report: The Council on Foreign Relations (CFR) is the think tank of monopoly-finance capital, Wall Street’s think tank. It is also a membership organization: the ultimate networking, socializing, strategic planning and consensus forming institution of the dominant sector of the U.S. capitalist class. The CFR’s activities help unite the capitalist class to become not just a class in itself, but also a class for itself. It is the world’s most powerful private organization, the “high command” body of the American plutocracy. The Council has an almost century long history of forming study groups to plan America’s overall “grand” strategic policies. It sets the agenda for debate, builds consensus among both the powerful and attentive publics, then inserts its own network of people into public office to implement its favored doctrines in the real world. One of its latest efforts, a study group on U.S. grand strategy toward China, completed its work and issued a report-- approved by the CFR board of directors--entitled Revising U.S. Grand Strategy Toward China, in March of 2015. This report used the term “dangerous circumstances” to describe the growing tensions between the world’s most powerful two nations.
Laurence H. Shoup will outline the CFR's worldview, their critique of current U.S. policy toward China, their view of China's grand strategy, what they think U.S. grand strategy should be, a critique of this CFR report, and the eco-socialist revolution that we now need.
Laurence H. Shoup is author of Wall Street’s Think Tank: The Council on Foreign Relations and the Empire of Neoliberal Geopolitics 1976-2014 (forthcoming, New York: Monthly Review Press, 2015).

END_OF_DOCUMENT_TOKEN_TO_BE_REPLACED
Added to the calendar on Mon, Jul 27, 2015 7:09PM
Add Your Comments
Support Independent Media
We are 100% volunteer and depend on your participation to sustain our efforts!