Add an Event
Newswire
Calendar
Features
Home
Donate
From the Open-Publishing Calendar
From the Open-Publishing Newswire
Indybay Feature
Publish to Newswire
Add an Event
Related Categories: Santa Cruz Indymedia | Government & Elections | Health, Housing & Public Services | Police State & Prisons
Despite Heavy Police and Security Presence, Campers Make it Through the Night at City Hall
by Alex Darocy (alex [at] alexdarocy.com)
Tuesday Jul 21st, 2015 9:30 PM
On Sunday night members of local homeless rights organizations held their second community campout at Santa Cruz City Hall. Making it through the entire evening at City Hall was no easy task for the group, which was comprised of some individuals who have homes of their own to sleep at and some who do not. The campers wrangled with Santa Cruz police, who rousted them out of their sleep spots in the City Hall court yard at 1am after insisting the area be vacated. Many, however, returned to their spots after the police left, and most were able to sleep through to the morning hours. Group sleepouts have been organized in Santa Cruz to call attention to local laws that render it a crime to sleep outdoors in public, and are also a response to the drastic cuts to day-services that occurred at the Homeless Services Center in June. 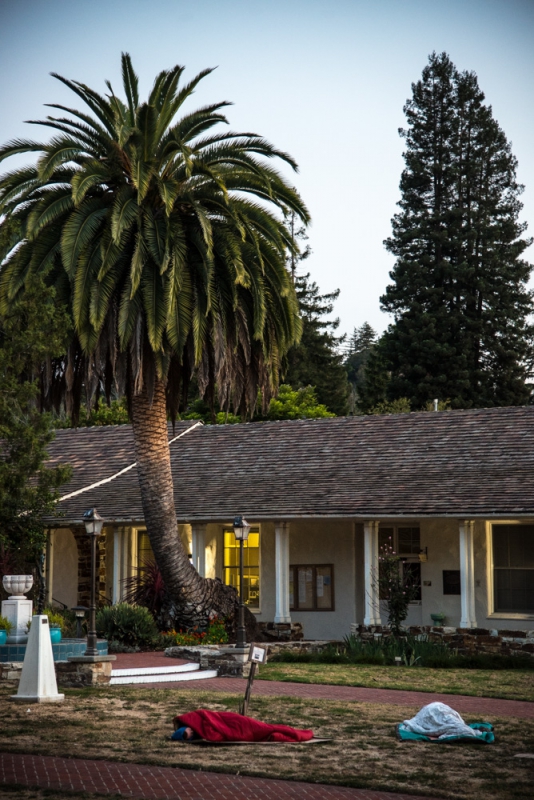 original image (668x1000)
The July 19 sleepout began with a march through downtown Santa Cruz where activists carried a portable shower stall to show it off to the public. After arriving at City Hall about two dozen individuals set up places to sleep shortly before sunset, and a table was set up where free vegan sandwiches were served.

One man setting up a small tent commented that he had a nice home and that he was there to protest.

One man occupied a small space on the lawn at City Hall using a sleeping bag provided by organizers. He slept next to his wheelchair.

Earlier, participants had discussed as a group what they would do in the event of a police raid. At least eight individuals were cited for refusing to leave City Hall at the first community sleepout the group held on July 4. Several maps of the area surrounding City Hall were displayed, and the merits of where to sleep in relation to the specific laws that would be violated were debated.

Many at this time were deciding whether or not they wanted to obey police commands if they were warned to leave City Hall, and some considered facing a citation or arrest as an intentional act of civil disobedience.

The court yard and all pedestrian access to Santa Cruz City Hall is closed to the public after 10pm and the whole area is actively patrolled throughout the night by First Alarm security guards employed by the city.

The 1am visit by Santa Cruz police on July 19 was initiated by a call from a First Alarm guard on patrol. The call resulted in the arrival a half-hour later of a squad of a dozen officers from the Santa Cruz Police Department, led by Lt. Bill Azua.

Most cleared the area for the police presence, but two protesters refused to leave City Hall and were cited by officers.

The first spoke at length to the supporters and police that surrounded him as he was written up. One of the points he wanted to express was that if there is no place for people to sleep at night, then the government has made it illegal for people without homes to exist.

Another person refused to leave City Hall and explained she believed it was her constitutional right to be in the area in order to protest anti-homeless laws.

Both of those cited on July 19 were also cited for refusing to leave City Hall at the previous community sleepout on July 4.

After the police left, some of the sleepers returned to the lawn area of the courtyard while others chose to sleep on the sidewalk in front of City Hall.

Another First Alarm guard walked through City Hall on foot patrol at 3am, and called the police, but no one from the department ever arrived.

A dozen people made it though the night in their various sleep locations, and at 7:30am they were served breakfast by volunteers. First Alarm continued to call the police on the group at this hour, complaining that sidewalks were being obstructed, but the police never arrived.

The group is planning similar actions for the future.


For more information about the Community Sleepouts, see: 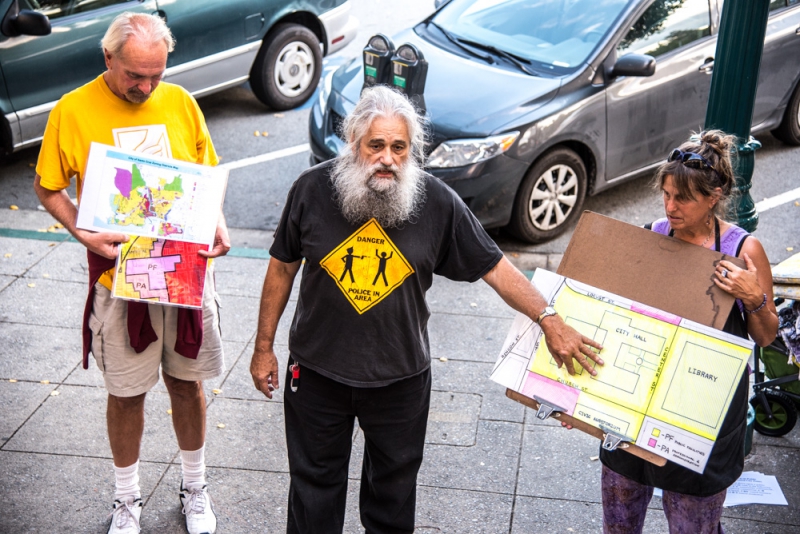 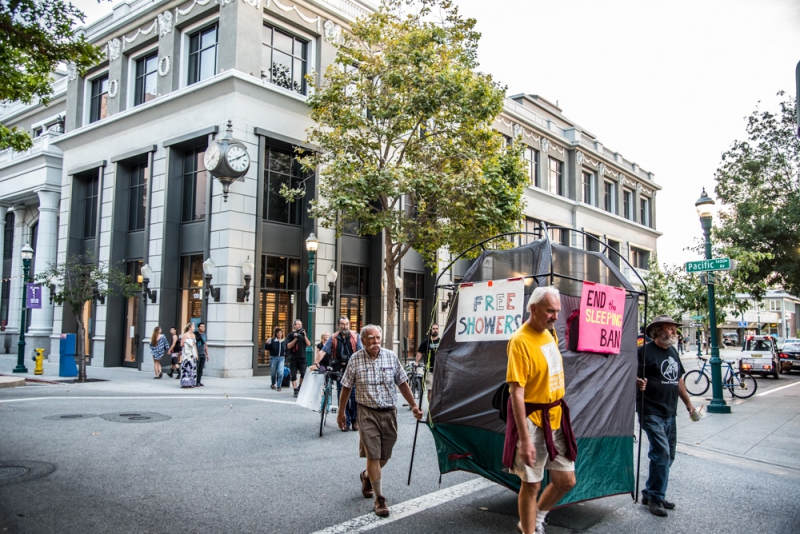 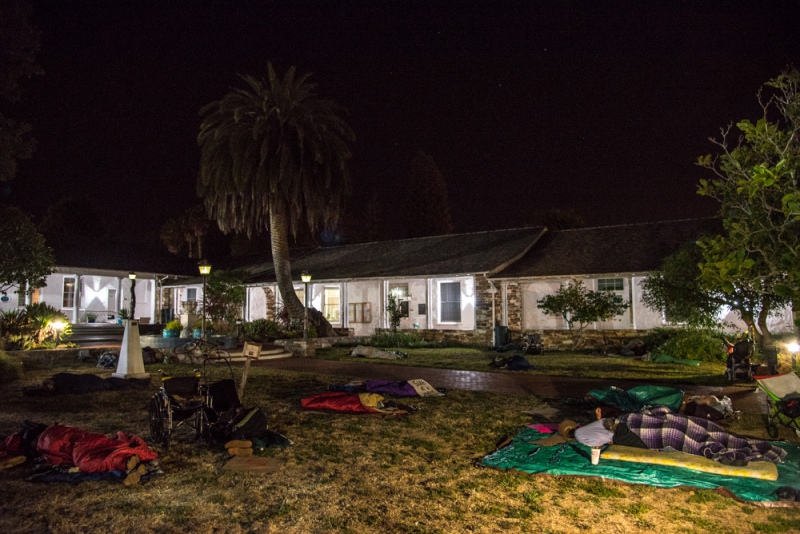 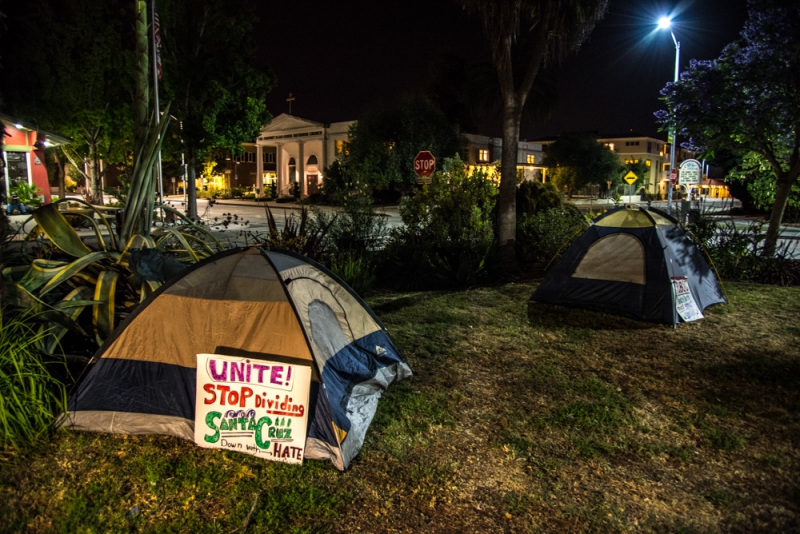 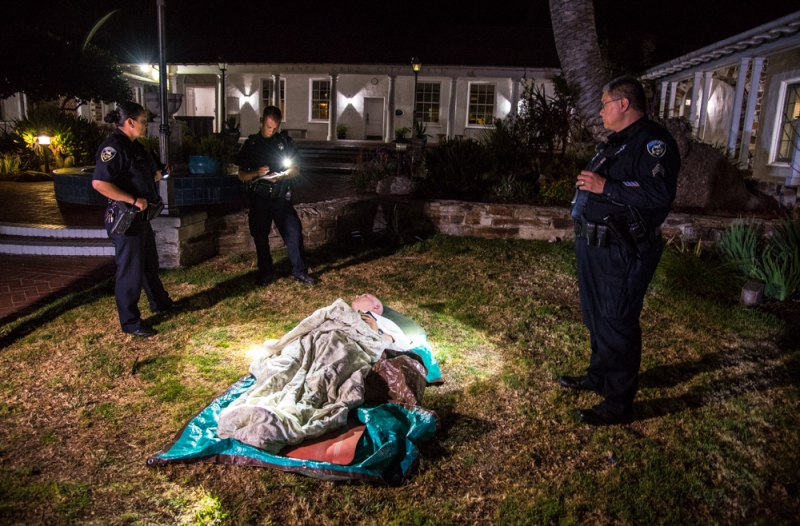 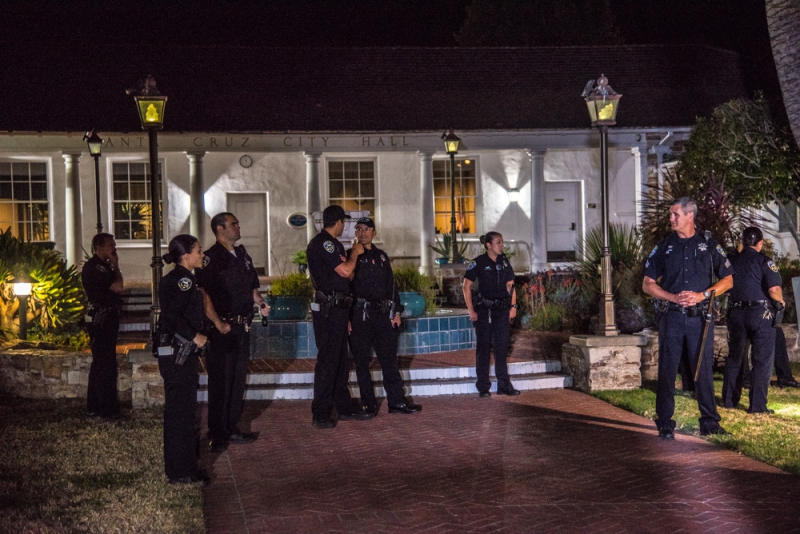 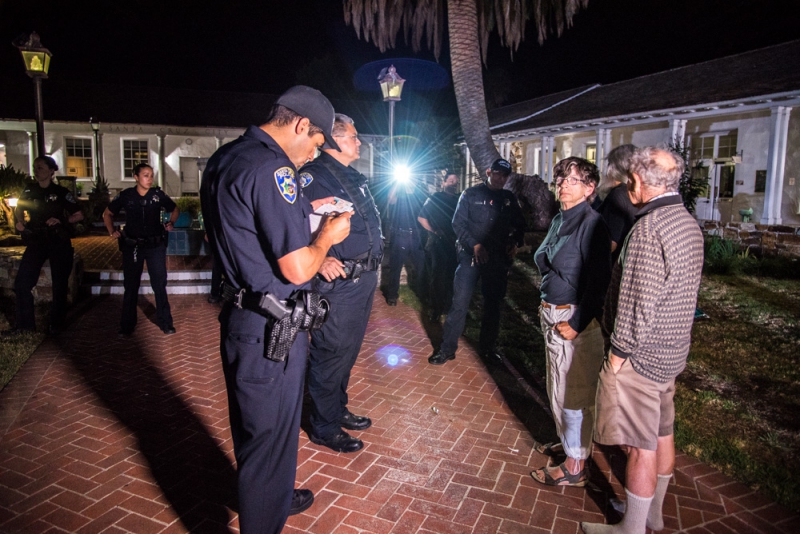 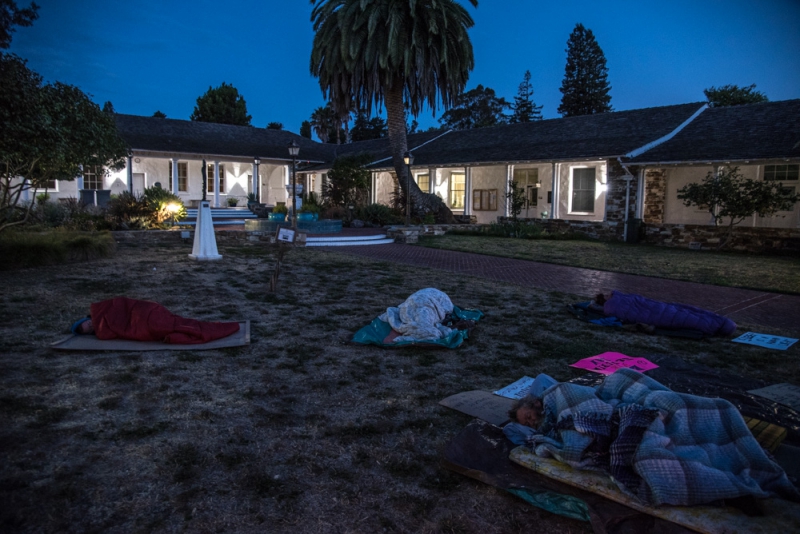 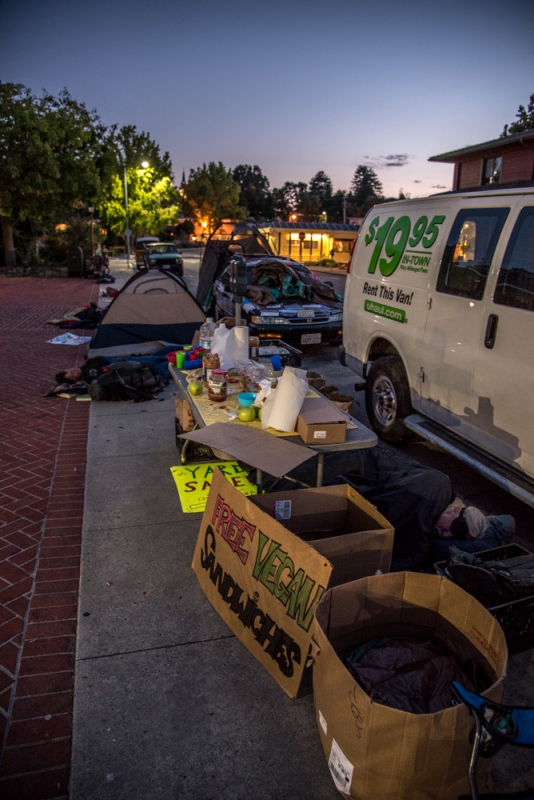 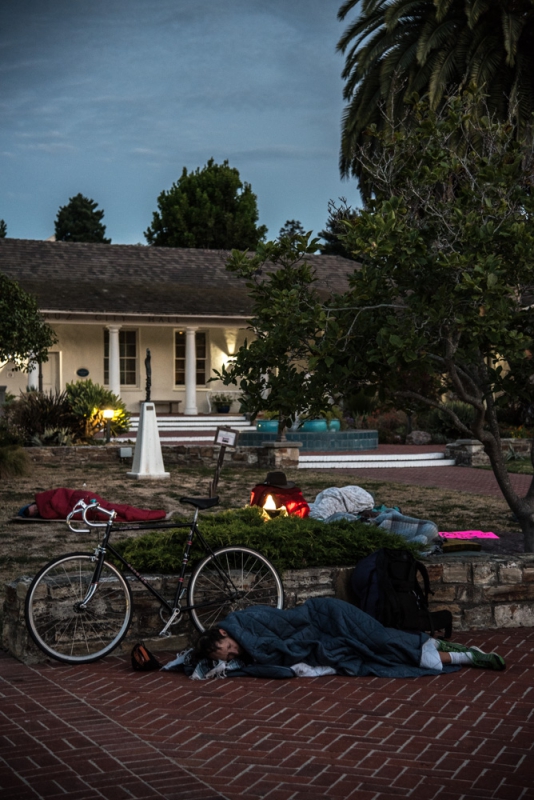 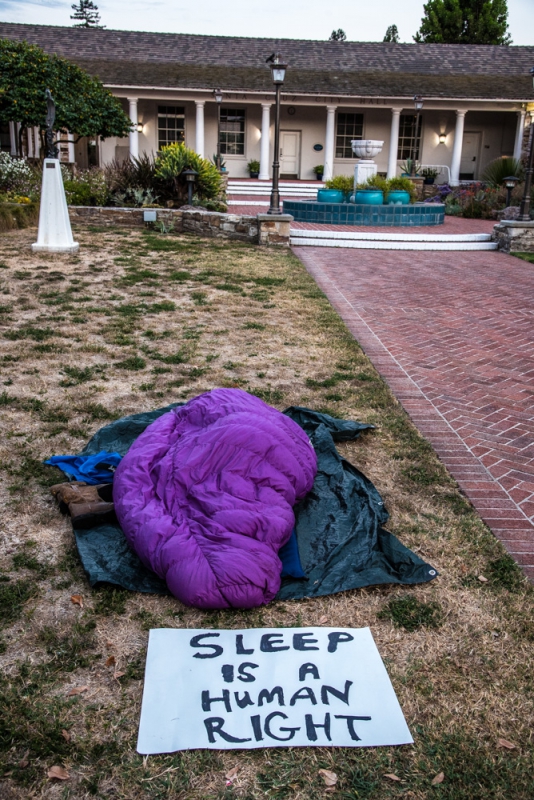 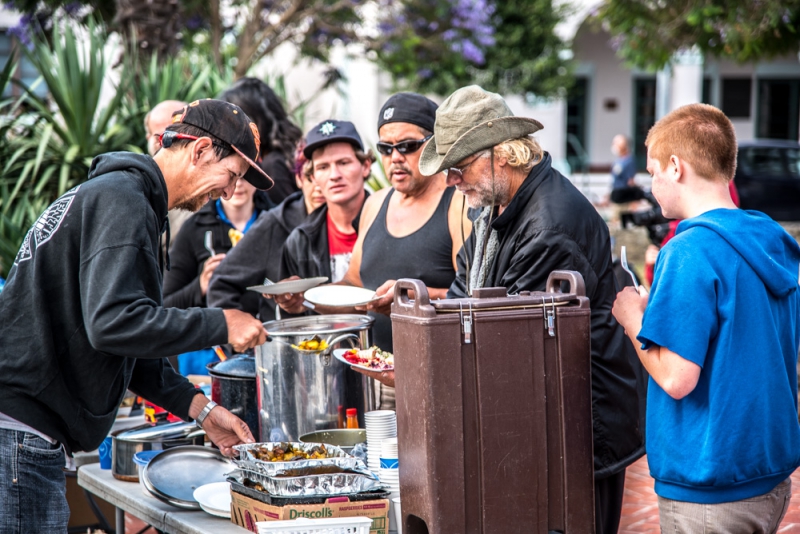