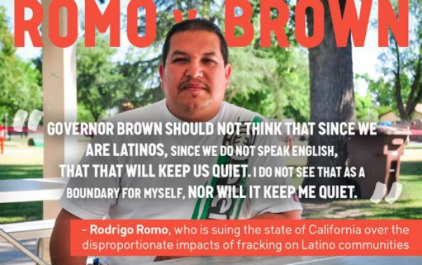 The regulations were developed under Senator Fran Pavley's Senate Bill 4, considered the "green light for fracking" bill by anti-fracking and public trust advocates.

The lawsuit, filed by lawyers Madeline Stano and Sofia L. Parino for the Center on Race, Poverty and the Environment, argues the new fracking regulations illegally discriminate against Latino public school children, who are disproportionately affected by the negative impacts of fracking in their neighborhoods.

California’s Government Code section 11135 prohibits the state from intentional or unintentional discrimination on the basis of race. The full complaint is available at: http://www.crpe-ej.org/crpe/images/stories/press_releases/SignedComplaintSmaller.pdf

Naming Governor Brown and California Oil and Gas Supervisor Steve Bohlen as defendants, the suit claims that the state is discriminating against Latino students by permitting wells in close proximity to schools they attend.

"Fracking in California overwhelmingly occurs close to schools that serve predominately Latino populations," according to a news release from the Center on Race, Poverty and the Environment. "More than sixty percent of the 61,612 California children who attend school within one mile of a stimulated well are Latino. Statewide, Latino students are over eighteen percent more likely to attend a school within a mile and a half of a stimulated well than non-Latino students."

Although they were intended to protect the public from the negative health impacts of fracking, the newly implemented regulations fail to address the inherent danger of allowing such practices to occur within close range of sensitive receptors, such as homes and schools, the Center stated. When fracking occurs close to schools, students are exposed to air toxins such as BTEX compounds, VOCs, and Hydrogen Sulfide that have serious impacts on their physical, social and emotional health.

“Everyday my daughters go to school, they fear for their health and safety because of how close the fracking wells are to their schools,” said Rodrigo Romo, the named plaintiff, whose two daughters have been exposed to dangerous levels of toxic pollution and psychological stress from extreme well stimulation while attending public schools in Shafter and Wasco, California.

Sequoia Elementary School, the school both of Romo’s daughters attended, is located within a half mile of three separate fracked wells, with one well less than 1,200 feet from the school. Romo said students are often forced to stay inside for long periods of time because of the noxious fumes associated with fracking and many students suffer from serious, unexplainable illnesses that many families believe are caused by the wells.

“Fracking and other types of unconventional well stimulation threaten every child’s right to a quality education,” said Madeline Stano, attorney for the Center on Race, Poverty and the Environment. “Governor Brown and our state regulatory agencies have failed to protect public school students and our state as a whole by adopting regulations that do not address the existing racially disparate impact of well stimulations on Latino students.”

"California’s Division of Oil Gas and Geothermal Resources (DOGGR) has a mandate to protect the life and health of Californians. Romo v. Brown aims to hold Governor Brown and state regulators accountable for protecting the health and safety of California’s students," Stano said.

"Governor Jerry Brown should not think that since we are Latinos, since we do not speak English, that will keep us quiet. I do not see that as a boundary for myself, nor will it keep me quiet," Romo concluded.

On September 20, 2013, Governor Jerry Brown signed Senate Bill 4, an odious piece of legislation that creates the infrastructure for the expansion of fracking in California. Before Brown signed the bill, he had received millions in donations from Big Oil, according to Robert Gammon's East Bay Express article published on October 2, 2013. (http://www.eastbayexpress.com/oakland/fracking-jerry-brown/Content?oid=3726533)

"Before Jerry Brown signed legislation last month that promises to greatly expand fracking in California, the governor accepted at least $2.49 million in financial donations over the past several years from oil and natural gas interests, according to public records on file with the Secretary of State's Office and the California Fair Political Practices Commission. Of the total, $770,000 went to Brown's two Oakland charter schools — the Oakland School for the Arts and the Oakland Military Institute. The other $1.72 million went to his statewide political campaigns for attorney general and governor, along with his Proposition 30 ballot-measure campaign last year," said Gammon.

One of the least well-known facts of California politics is that the oil industry is the largest and most powerful corporate lobby in California, allowing the oil and gas companies to manipulate, capture and control the regulatory apparatus. While Jerry Brown cynically spouts off about "climate change" and "green energy" at press conferences and climate summits, he is in reality a stooge of Big Oil.

Under the Brown and Schwarzenegger administrations, a network of questionable "marine protected areas" was implemented on the South Coast under the helm of a Big Oil lobbyist. Strongly supported by state officials and corporate "environmental" NGOs, Catherine Reheis-Boyd, the president of the Western States Petroleum Association (WSPA), chaired the Marine Life Protection Act (MLPA) Initiative to create so-called "marine protected areas" in Southern California.

These bizarre "marine protected areas" fail to protect the ocean from oil spills, oil drilling, fracking, pollution, corporate aquaculture, military testing and all human impacts on the ocean other than sustainable fishing and gathering.

The Western States Petroleum Association that Reheis-Boyd heads is the most powerful lobbying group representing the oil industry in the West. WSPA set a new record for lobbying expenses in 2014 when it spent $8.9 million spent on lobbying, nearly double what it spent in the previous year. WSPA spent $4.67 million in 2013. (http://www.eastbayexpress.com/SevenDays/archives/2015/02/06/big-oil-group-spent-89-million-last-year-lobbing-jerry-brown-and-california-officials)

In addition to promoting the expansion of fracking in California, Governor Jerry Brown, the "Climate Coyote," has also rushed the construction of the salmon-killing Delta tunnels; has driven Delta smelt, winter Chinook salmon and other species to the edge of extinction; and campaigned for this water bond bailout for corporate agribusiness, developers and oil companies. For more information, read my investigative piece about Brown's war on the environment at: http://www.indybay.org/newsitems/2015/04/15/18771135.php
Add Your Comments
Support Independent Media
We are 100% volunteer and depend on your participation to sustain our efforts!