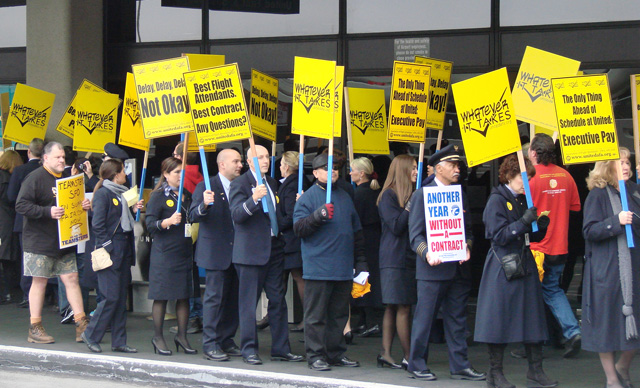 "We Are Making 1994 Wages" UAL AFA-CWA, IAM, APA, IBT 1/7/2011 Labor Picket At SFO
https://www.youtube.com/my_videos?o=U&sq=afa+cwa
"We are making 1994 wages" This was the statement of AFA-CWA SFO chair Christine Black in San Francisco as part of an international day of action.
UAL CWA-Airline Flight Attendants, International Association of Machinists IAM 1781, IAM 1782, Airline Pilots Association APA and International Brotherhood Of Teamsters workers picketed at At SFO on 1/7/2011 against the UAL airline management and owners who continue to demand take backs from the UAL workers. The pickets also took place throughout the US and internationally at UAL terminals.
Production Of Labor Video Project
http://www.laborvideo.org laborvideo.blip.tv
(415)282-1908
https://www.youtube.com/my_videos?o=U&...
Add Your Comments
LATEST COMMENTS ABOUT THIS ARTICLE
Listed below are the latest comments about this post.
These comments are submitted anonymously by website visitors.