Add an Event
Newswire
Calendar
Features
Home
Donate
From the Open-Publishing Calendar
From the Open-Publishing Newswire
Indybay Feature
Related Categories: Santa Cruz Indymedia | Government & Elections | Health, Housing & Public Services | Police State & Prisons
Community Campout Ends with Citations
by Alex Darocy (alex [at] alexdarocy.com)
Sunday Jul 5th, 2015 7:42 PM
On July 4, community members in Santa Cruz held a public campout at Santa Cruz City Hall, but it was quickly cut short by police at about 1am. The campout was organized in response to the recent reduction of services at the Homeless Services Center that occurred due to a funding deficit, as well as to protest local laws that criminalize sleeping outdoors. [Top photo: Police issue citations to clear the community campout from Santa Cruz City Hall. Scroll down for more photos.] original image (1000x668)
Organizers announced in advance of the protest that a location for the campout would be decided at a meeting to follow the July 4 Food Not Bombs dinner at the post office in downtown Santa Cruz. At an assembly on the steps of the post office, a group of about 40 people voted to camp in the courtyard at City Hall, which would be an act of civil disobedience as the area is closed to public use at night.

To address sanitary needs, organizers rented a portable restroom, which was to be towed to City Hall on a small trailer. The plan was complicated when police pulled over the truck towing the port-a-potty. Attorney and sleep activist Ed Frey was at the wheel of the truck, which police say they stopped because it was missing the proper tail lights, however an officer was first seen taking down the vehicle's license plate number at the post office where it was parked earlier.

It appeared that police weren't going to allow the porta-a-potty to be towed any further, but individuals became more vocal with officers, and eventually Deputy Chief of Police Rick Martinez arrived. As a solution, one organizer convinced him of the necessity of a police escort to City Hall, as it wasn't very far away. Martinez agreed. The police car that initially pulled over the truck then escorted the port-a-potty the approximately three blocks distance to City Hall.

After their arrival, about 25 people set themselves up to sleep in various locations around City Hall's courtyard. Some snuggled into free sleeping bags, and others ate peanut butter and jelly sandwiches, both of which were provided by the organizers.

Eventually, all of the people who weren't planning to sleep at the protest left, and by midnight most present were quiet and attempting to sleep. Fireworks could still be heard and seen in the sky as 4th of July continued to be celebrated in various parts of the city.

At 1am a group of 22 police officers, led by Deputy Chief Martinez, showed up at City Hall. Some of those who were sleeping quickly rose and avoided being cited, but others refused to move in an act of civil disobedience.

After warning individuals they had to leave City Hall, the police themselves left. The group of protesters remained in the courtyard for some time after that deciding what to do. Eventually they chose to reconvene for breakfast in front of the post office in the morning.

The campout was originally called for by activists from a variety of organizations, including Santa Cruz Food Not Bombs, Homeless United for Friendship and Freedom (HUFF), residents and refugees from the Coral St. complex, UCSC students, Camp of Last Resort workers, the Homeless Legal Persons Assistance Project, and others.

All images copyright Alex Darocy. Re-use by permission only.
§Meeting at the post office to decide the location of the campout
by Alex Darocy
Sunday Jul 5th, 2015 7:42 PM 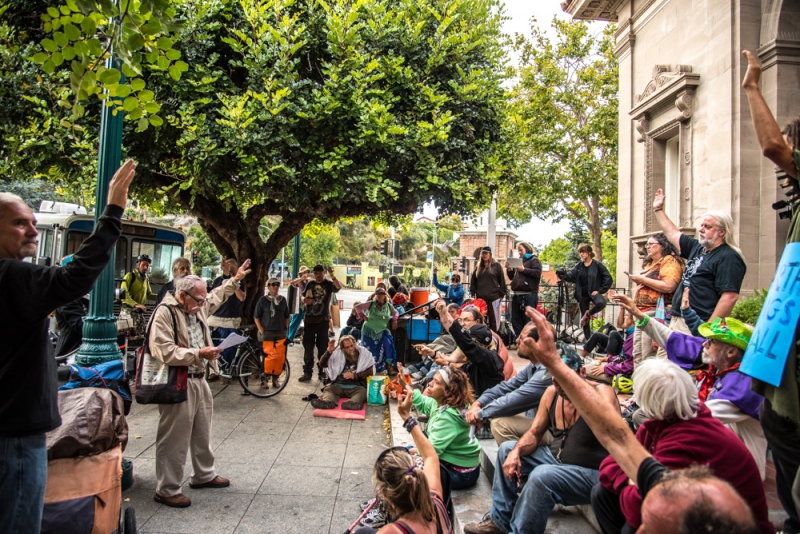 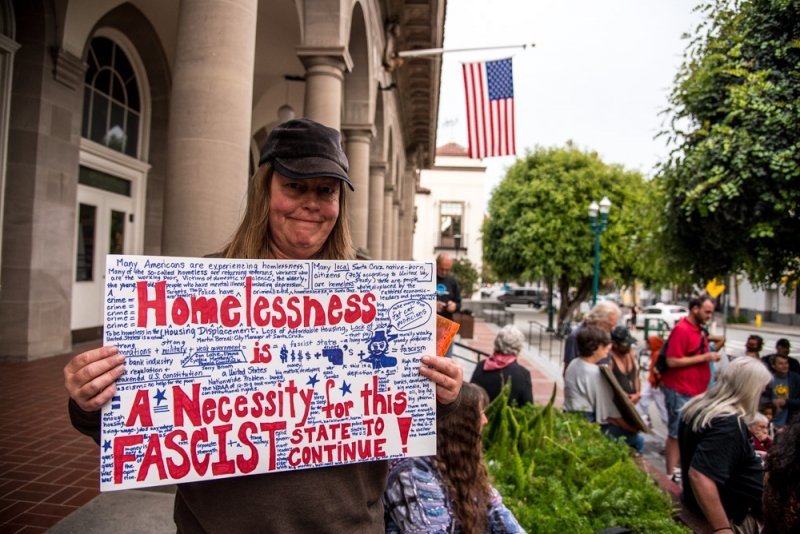 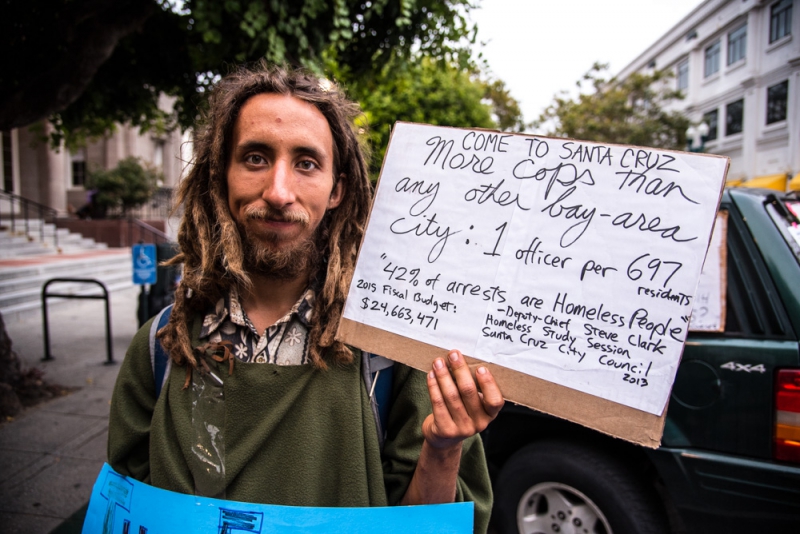 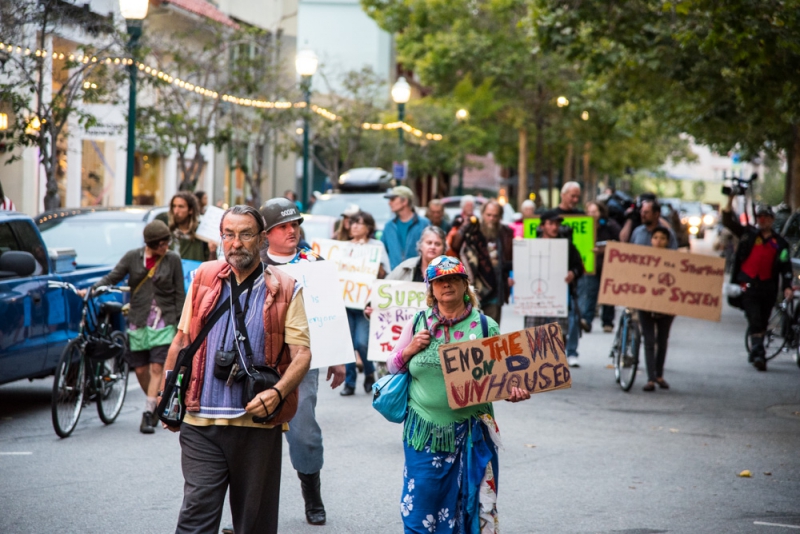 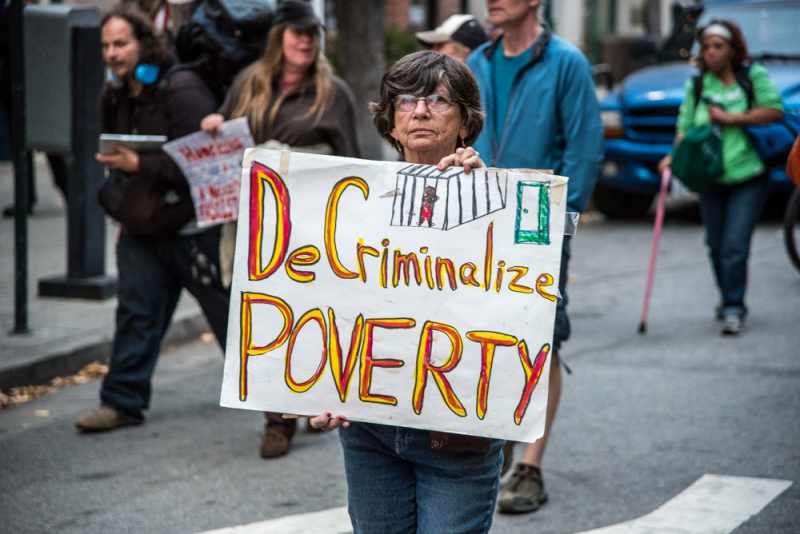 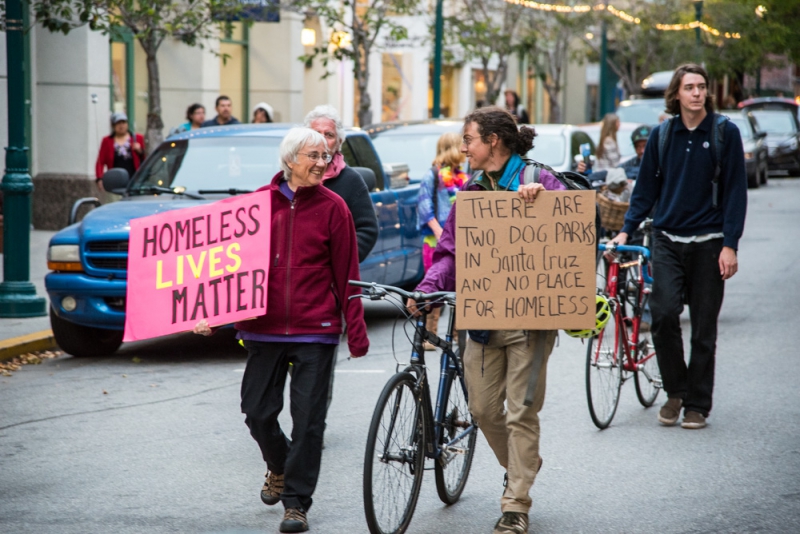 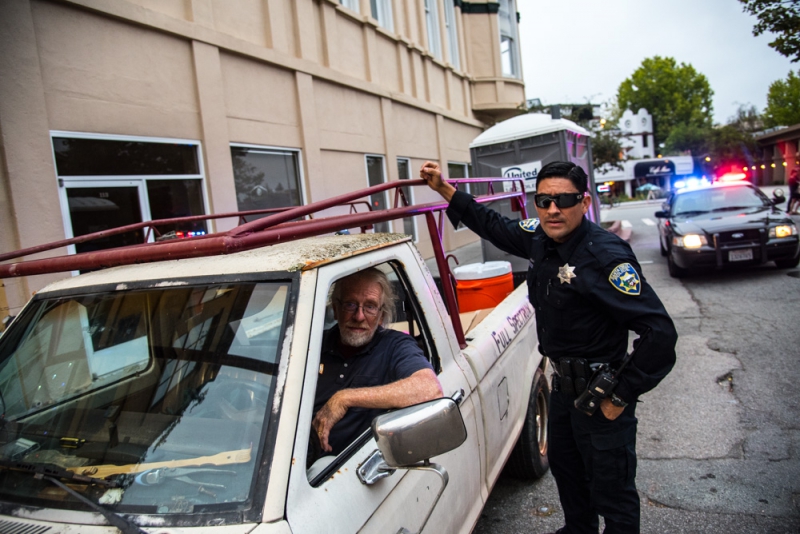 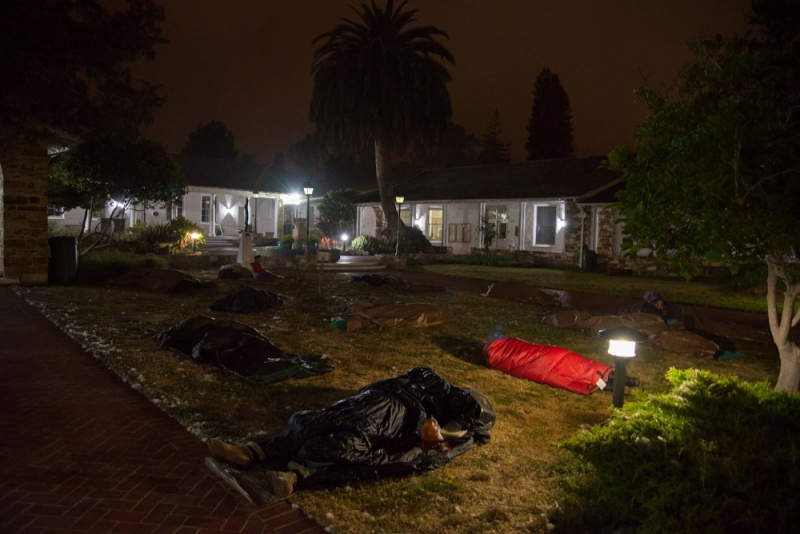 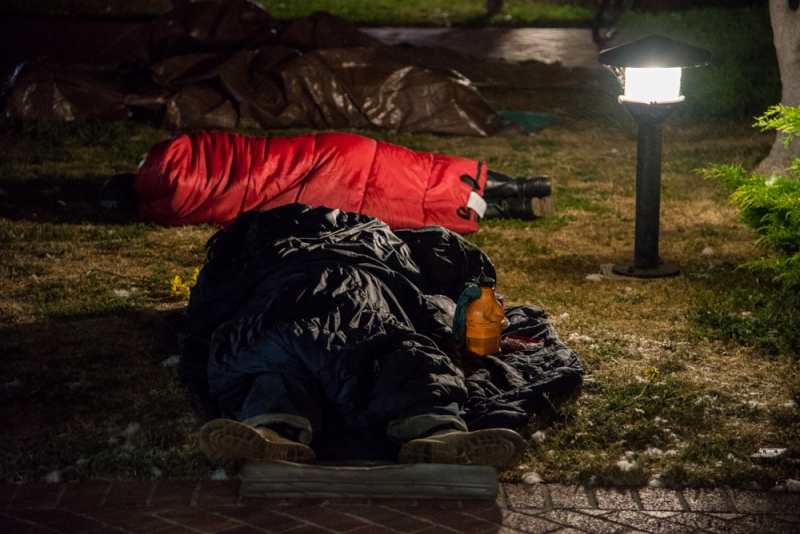 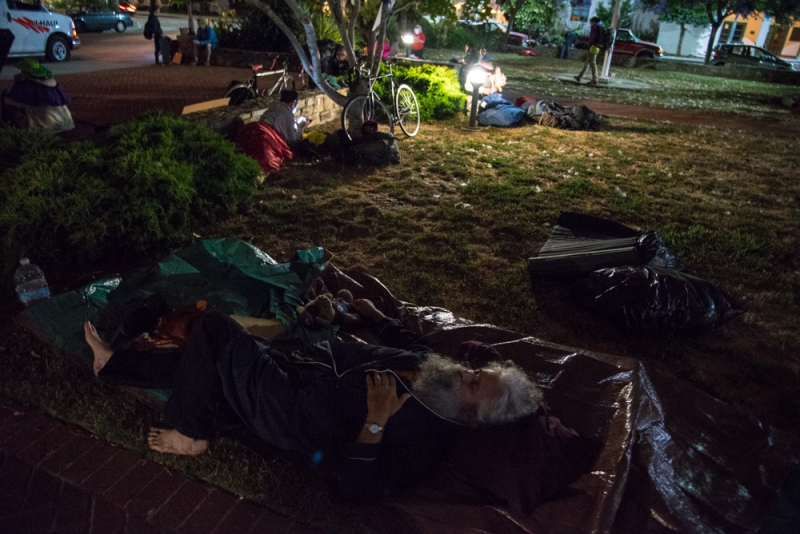 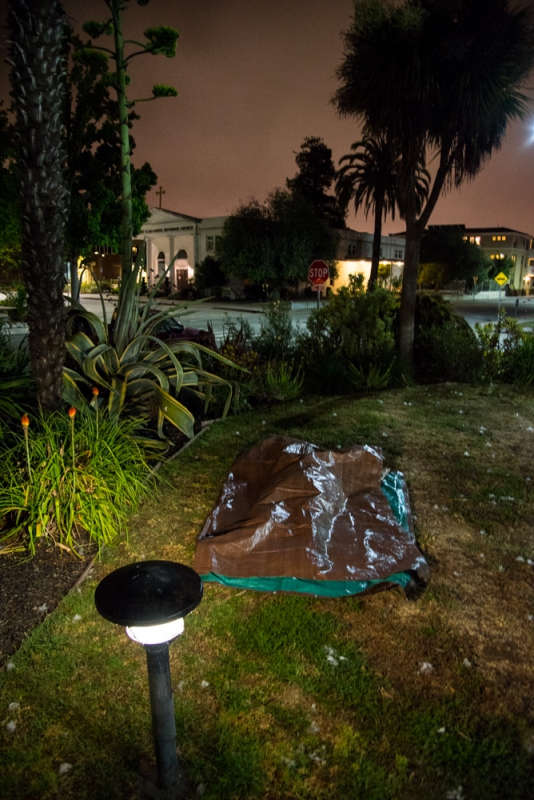 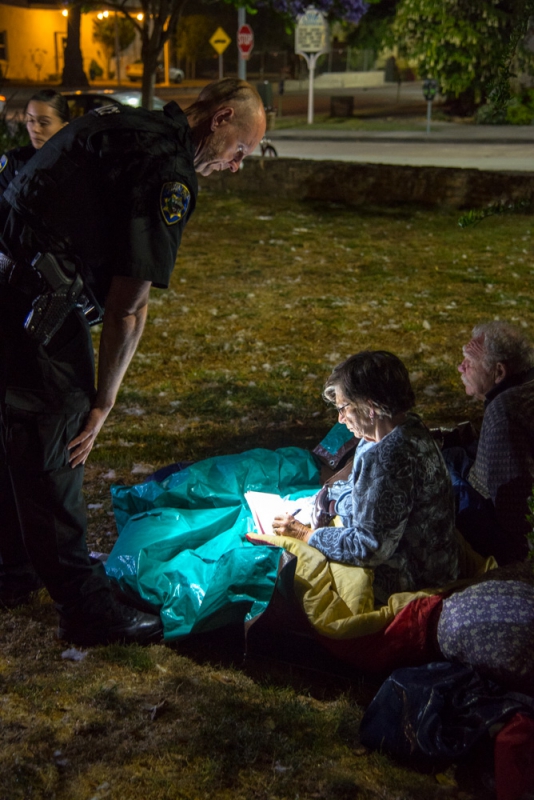 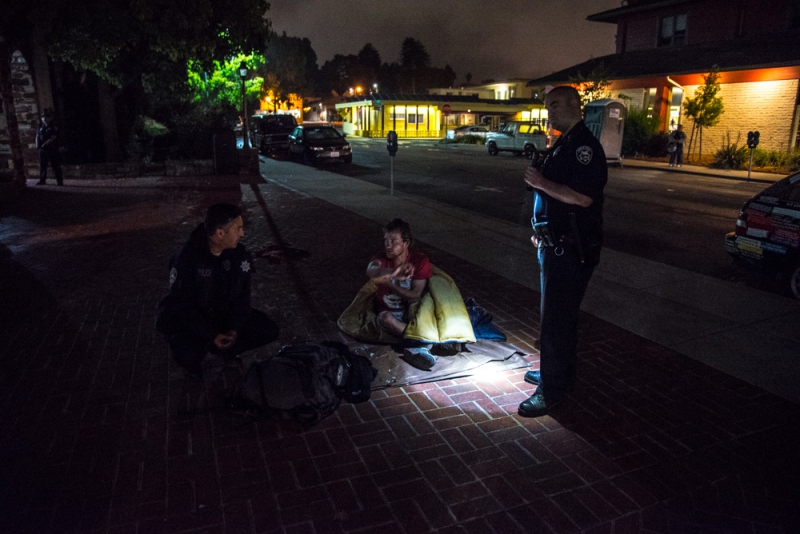 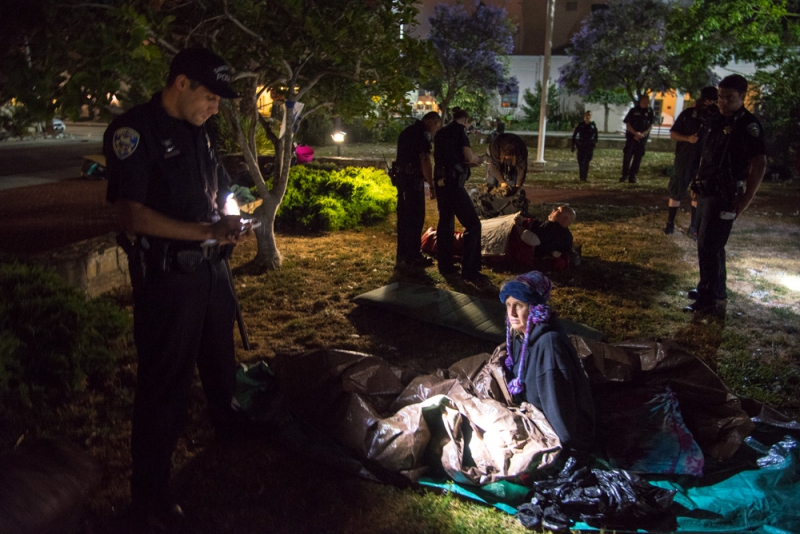 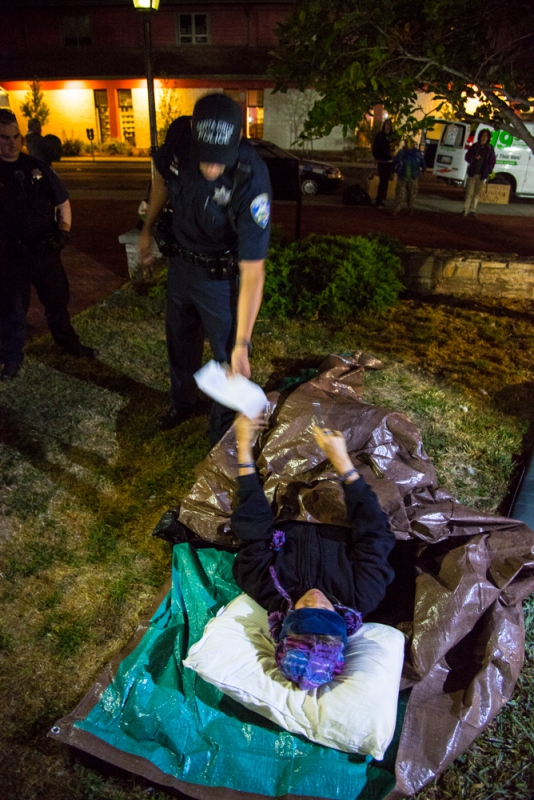 original image (1000x668)
Officers with the Santa Cruz Police Department.
Add Your Comments
LATEST COMMENTS ABOUT THIS ARTICLE
Listed below are the latest comments about this post.
These comments are submitted anonymously by website visitors.