by Dan Bacher
While environmental groups blasted the regulations developed under SB 4, the oil industry gushed with an oily torrent of praise for the new rules. Catherine Reheis-Boyd, the President of the Western States Petroleum Association (WSPA) and the former Chair of the Marine Life Protection Act (MLPA) Initiative Blue Ribbon Task Force to create alleged "marine protected areas" in Southern California, praised DOGGR for rejecting comments calling for a moratorium on the environmentally destructive practice of fracking in California. 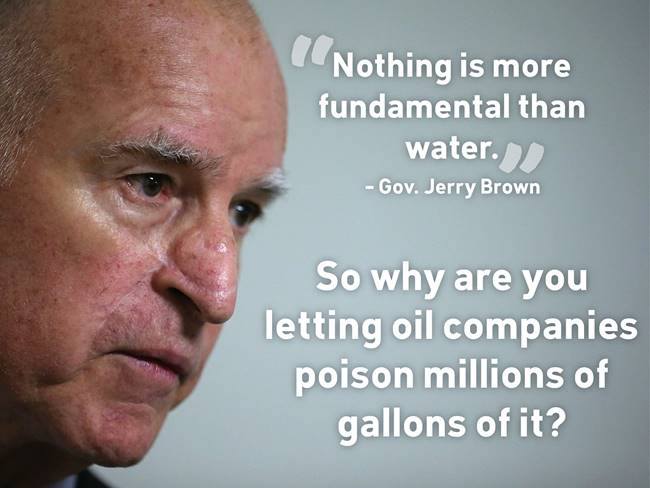 The Governor Jerry Brown administration, known for its subservience to Big Oil, is gearing up for a massive expansion of fracking and other extreme oil drilling techniques that will contaminate California's groundwater supplies, pollute rivers and streams, and devastate coastal ecosystems, including so-called "marine protected areas" implemented under his helm.

On July 1, anti-fracking, environmental and watchdog groups responded to the release of final fracking regulations developed under Senate Bill 4, pointing out that the rules promote more fracking and pollution of water supplies in the drought-plagued state.

Senate Bill 4, the green light for fracking bill, was signed by Governor Jerry Brown on September 20, 2013. The Natural Resources Defense Council (NRDC), the California League of Conservation Voters, the Environmental Defense Fund and other corporate "environmental" NGOs provided green cover for the odious legislation. They backed the bill until the very last minute when they finally decided to withdraw support because of amendments from the Western States Petroleum Association and other Big Oil interests that further weakened the already weak legislation.

In a statement, Food and Water Watch said, "Today the Brown Administration finalized regulations on fracking and other dangerous oil extraction techniques that will allow oil and gas companies to continue to conduct these techniques at the expense of California’s water, air, agriculture and public health."

“These regulations will not alter the fundamental way these inherently dangerous oil drilling techniques are conducted and therefore cannot prevent the dangerous and severe consequences that will continue to harm California. For example, the recent Refugio oil spill in Santa Barbara has been tied to offshore oil rigs that have used acidizing and are seeking permits to frack. Moreover, the industry continues to dispose its toxic wastewater into aquifers that could be used for drinking and irrigation purposes.”

“The regulatory process mandated by Senate Bill 4 has been misguided and backwards as it has allowed the industry to frack while and before a study and environmental review were conducted to determine the impacts of these dangerous extraction techniques. As such, this review has no bearing on the regulations, which were developed by the Department of Oil and Gas and Geothermal Resources, an industry-friendly agency charged with promoting oil development.

“A better and more responsible course of action would be for Governor Brown to implement a moratorium on these techniques now. Faced with the Governor’s ongoing failure to protect Californians, it’s no wonder that more and more communities are working to pass local bans on fracking and oil drilling.”

Californians Against Fracking also issued a news release, noting that the California Council on Science and Technology is expected to release its second and third volumes of a report titled “An Independent Scientific Assessment of Well Stimulation in California,” on July 9.

"The first volume, released in January, included no information about health impacts associated with a third of chemicals used in fracking. While CCST delayed the release of the portion of the report that examines the health risks of fracking, it did conclude in the first volume that fracking in California uses high concentrations of chemicals at shallow depths and in close proximity to our drinking water aquifers," according to the release.

"In California, drilling happens in overburdened communities that already suffer from the worst air pollution, have the highest levels of childhood asthma, and generally have the greatest health disparities in the state,” said Barbara Sattler, a board member at the Alliance of Nurses for Healthy Environments and professor at the University of San Francisco. “That regulators would finalize regulations and release a final environmental review before the completion of an independent scientific assessment is simply unacceptable.”

CAFrackFacts.org also responded to the California’s Division of Oil, Gas and Geothermal Resources (DOGGR)'s release of its final report of the environmental impacts unconventional well stimulation techniques, such as fracking and acidization, in California.

"The environmental impact report (EIR) reveals that these drilling techniques have 'significant and unavoidable impacts' that cannot be mitigated," according to a press release from the group.

In a mockery of science, the EIR, mandated under SB 4, was drafted by DOGGR and released six months after California’s first-ever fracking regulations were finalized, making it impossible for the regulations to reflect the findings of the EIR.

“California has reversed the regulatory process when it comes to fracking,” said Jackie Pomeroy, spokesperson for CAFrackFacts. "State regulators finalized California's fracking regulations a full six months before the environmental impacts of these unconventional well stimulation techniques were understood. We now know that these techniques come with serious risks that cannot be mitigated."

The report found the following significant and unavoidable impacts:

Climate: Well stimulation will "generate greenhouse gas emissions that may have a significant impact on the environment, [and] conflict with an applicable plan, policy or regulation adopted for the purpose of reducing the emissions of greenhouse gases" (pg 14).

Public Safety: Well stimulation will "increase risks to public safety by exposing the public to accidental hazardous materials releases from pipelines," as well as, "create a hazard to the public or environment through crude oil transport and reasonably foreseeable accidents and releases" (pg 14).

While environmental groups blasted the regulations developed under SB 4, the oil industry gushed with an oily torrent of praise for the new rules. Catherine Reheis-Boyd, the President of the Western States Petroleum Association and the former Chair of the Marine Life Protection Act (MLPA) Initiative Blue Ribbon Task Force to create alleged "marine protected areas" in Southern California, praised DOGGR for rejecting comments calling for a moratorium on the environmentally destructive practice of fracking in California.

Reheis-Boyd noted that "DOGGR has rejected comments calling for a moratorium on well stimulation treatments and confirms the legality of these technologies, which have been practiced safely in California for decades."

"We appreciate the great care DOGGR has taken to explain the reasoning behind the changes that were made in the draft EIR, including the deletion of some mitigation measures that were determined to be infeasible or unnecessary," she said.

We are encouraged by DOGGR's commitment to be as flexible as possible in evaluating the need for specific mitigation measures, given site-specific considerations, and its recognition that the mitigation measures in the final EIR are suggestions rather than mandates," the oil lobbyist/"marine guardian" claimed.

"We also appreciate DOGGR's confirmation that it will work very closely with Kern County and other local lead agencies, with the goal of achieving consensus on the mitigation measures that are appropriate to specific projects," she concluded.

Meanwhile, crews continue to clean up the Santa Barbara Oil spill that began on May 19 when a pipeline owned by Plains All America Pipeline ruptured off Refugio State Beach. The corporate and most "alternative" media continue to suppress any discussion of the root cause of the oil spill - Big Oil's capture of the regulatory apparatus.

WSPA President Catherine Reheis-Boyd, the head of the same oil industry trade association that lobbies for the Plains All American Pipeline corporation, whose corroded pipeline rupture caused a massive oil spill off Refugio State Beach, is the very same person who chaired the panel that created the so-called "marine protected areas" that have been fouled with crude oil.

To read my groundbreaking investigative piece, please go to:
http://www.calitics.com/diary/15750/lobbyist-for-oil-pipeline-company-oversaw-creation-of-fouled-marine-protected-areas
Add Your Comments
Support Independent Media
We are 100% volunteer and depend on your participation to sustain our efforts!