Add an Event
Newswire
Calendar
Features
Home
Donate
From the Open-Publishing Calendar
From the Open-Publishing Newswire
Indybay Feature
Publish to Newswire
Add an Event
Related Categories: California | Environment & Forest Defense | Government & Elections | Health, Housing & Public Services
Tests reveal toxic cocktail as media covers up CA. oil spill's root cause
by Dan Bacher
Wednesday Jul 1st, 2015 8:28 AM
While Governor Brown, other state officlals and the mainstream media continue to falsely portray California as a "green" state, the devastation of the oil spill shows the fragility of California's ocean waters - and exposes the failure of state and federal officials to stop a disaster like this, due to the capture of the state's regulatory apparatus by Big Oil. 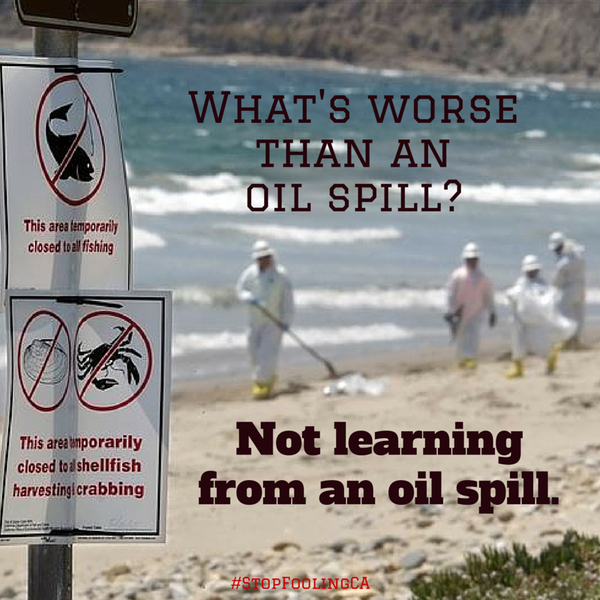 As the mainstream media and most "alternative" media refuse to discuss the root cause of the Santa Barbara Oil Spill - Big Oil's capture of the regulatory apparatus - an independent scientific study revealed that the spill released glutaraldehyde, ethylbenzene, naphthalene and other toxic chemicals into the environment.

Numerous toxic chemicals known to pose severe threats to human health and marine life contaminated the Pacific Ocean and beaches when more than 100,000 gallons of oil spilled from a ruptured pipeline in Santa Barbara County, according to independent test results released on June 25 by Water Defense.

The non-profit organization’s testing of spilled oil deposited on the beach and water samples collected from the May 19 Refugio State Beach oil spill confirmed the presence of several toxic chemicals including, but not limited to, Ethylbenzene, Toluene, Xylene, and Naphthalene.

"The test results also confirmed the presence of Glutaraldehyde – a biocide that is also a key additive in drilling, fracking and acidizing injections – in the pipeline oil deposited on the beach," according to a joint news release from Water Defense and Food and Water Watch. "These chemicals, which are known to be a severe threat to human health, were released onto the beach and into the Pacific Ocean, contaminating ocean waters and threating marine life."

“These toxic chemicals should never be released in our environment let alone into the water column and beaches of the Pacific Ocean. Their presence indicates just how dangerous this oil spill really is to people, marine life and our environment,” said Scott Smith, chief scientist for Water Defense, in a news release. “These chemicals can never be completely cleaned up, especially with the archaic scraping of the beach and rocks with manual brushes.”

The Water Defense results come days after several studies confirmed that the Refugio oil also contaminated beaches in southern California, including Manhattan Beach, and come one week after a study from the Unified Command Center claimed the chemicals in the oil were "not a concern." The latter study failed to disclose evidence to support its conclusions, or the names and affiliations of scientists involved, charged the two groups.

"Tidal variations cause the oil deposits on the beach to re-release oil and its related chemicals into the water. According to the Centers for Disease Control & Prevention, exposure to the chemicals found in the tests by both the Unified Command Center and Water Defense can lead to cancer and reproductive health problems. Chemicals such as Naphthalene, Ethylbenzene, Xylene, and Toluene can enter the body through the skin and accumulate in body tissue, which is a particular concern for beachgoers who encounter tar balls on southern California beaches," the groups said.

“These chemicals are a threat to our health and the health of our unborn,” said Dr. Kevin Beckmen, who has practiced Family Medicine in Solvang for fifteen years. “This spill has exposed this community to chemicals for which there are no safe levels of exposure. They can cause cellular damage and death with both immediate toxicity and long-term health effects including birth defects, abortion and cancer.”

These chemicals are also a serious concern for marine life. For example, in the 2010 BP Deepwater Horizon Spill in the Gulf of Mexico, initial test levels didn’t show chemical concentrations that “exceed human health benchmarks,” but the spill has had a tremendous impact on the health of the ecosystem, with Naphthalene linked to the skin lesions seen on snapper and dolphins still dying five years later, according to the groups.

Some of the chemicals present in the samples, including Glutaraldehyde and volatile organic compounds similar to Ethylbenzene are also commonly used by industry when drilling and when injecting fluids to stimulate the flow of oil, such as with the extreme energy extraction methods of fracking, acidizing and cyclic steam injection.

A recent investigation by the Environmental Defense Center revealed that several ExxonMobil- and Venoco-owned offshore oil rigs that feed the now broken Plains All-American Pipeline have used acidizing multiple times and have applied for permits to conduct fracking. Chemicals additives — including biocides — are often in the fluids released into the ocean from ordinary accidents and spills, along with the other toxic chemicals in oil.

“As we transition to renewable energy, the Refugio oil spill is a stark reminder why we must simultaneously phase out oil development in California,” said Adam Scow, California Director of Food & Water Watch. “As a first step, Governor Brown must ban fracking, acidizing and other extreme forms of extraction, both onshore and offshore in order to prevent future spills and end the release of toxic and often undisclosed chemicals into California’s environment.”

Phase 2 testing results, which include oil and water samples from beaches in Southern California counties are expected to be released within the next 10 days, according to the groups.

For the test results and more information, go to: http://www.foodandwaterwatch.org/pressreleases/new-tests-find-toxic-cocktail-in-santa-barbara-spill/

While Governor Brown, other state officlals and the mainstream media continue to falsely portray California as a "green" state, the devastation of the oil spill shows the fragility of California's ocean waters - and exposes the failure of state and federal officials to stop a disaster like this, due to the capture of the state's regulatory apparatus by Big Oil.

Unfortunately, in the reports from the Associated Press, other mainstream media and most of the "alternative" media you won't see one word about one of the most troubling and significant aspects of this oil spill - the fact that Catherine Reheis-Boyd, the President of the Western States Petroleum Association and a lobbyist for Plains All American Pipeline and other oil companies, served as the Chair of the Marine Life Protection Act (MLPA) Initiative Blue Ribbon Task Force to create the same "marine protected areas" that are now being fouled by crude oil.

That's right - the very same person who is lobbying for increased offshore drilling and fracking in California - and is serving as the lobbyist for Plains All American - is the exact same oil lobbyist who chaired the panel that created the "marine protected areas" that are now being fouled by the Santa Barbara Oil Spill. And while she served as the chair for the South Coast task force - and served on the panels for the Central Coast, North Central Coast and North Coast from 2004 to 2012 - oil companies were fracking like crazy off the California coast.

In 2013, an Associated Press and Freedom of Information Act investigation revealed that oil companies had conducted over 200 offshore fracking operations in Southern California waters, including the Santa Barbara Channel, over a 20-year period.

Why was Reheis-Boyd's chairing of the MLPA Initiative Blue Ribbon Task Force a conflict of interest?

"Because, as President of the Western States Petroleum Association she had to have known that offshore fracking was already taking place, and she steered the MLPA process around that subject, making sure the oil companies wouldn’t be bothered by such things as ‘'No Take' in a State Marine Reserve," said Joey Racano, Director of the Ocean Outfall Group, in a comment on the OB Rag. (http://obrag.org/?p=95147#.VYmCjN3DyRo)

"Catherine Reheis-Boyd was President of the Western States Petroleum Association at the same time she was Chair of the Blue Ribbon Task Force on the Marine Protected Areas, and during the all-important ‘implementation’ process. That means she got to decide what would make it on to the agenda and what wouldn’t," he noted.

"Nobody is saying Marine Protected Areas aren’t a good thing or that they aren’t causing a return to health and abundance. What we are saying is that we can’t wait for some future process to get the oil out. Indeed, the entire MLPA was called a ‘once in a generation opportunity’ to do so," he emphasized.

The oil industry is the largest and most powerful corporate lobby in California. Reheis-Boyd's Western States Petroleum Association (WSPA) set a new record for lobbying expenses in 2014 when it spent $8.9 million spent on lobbying, nearly double what it spent in the previous year. WSPA spent $4.67 million in 2013. (http://www.eastbayexpress.com/SevenDays/archives/2015/02/06/big-oil-group-spent-89-million-last-year-lobbing-jerry-brown-and-california-officials)

To read WHY the oil spill occurred - Big Oil's capture of the regulatory apparatus - read my groundbreaking investigative news piece at: http://www.calitics.com/diary/15750/lobbyist-for-oil-pipeline-company-oversaw-creation-of-fouled-marine-protected-areas