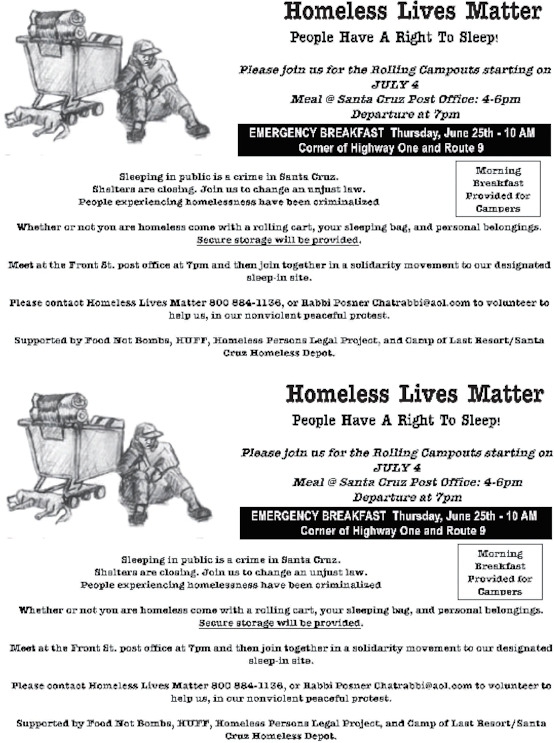 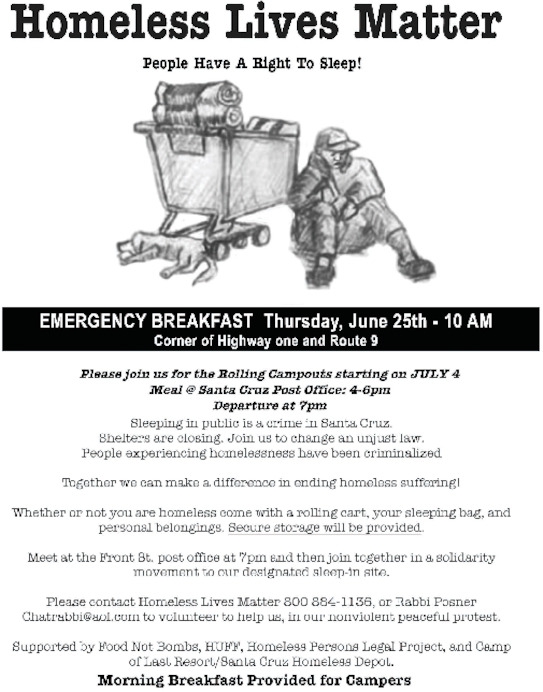 Download PDF (2.1MB)
Event Flyer Large
§Text of Abbi's email
by PDF to text converter Wednesday Jun 24th, 2015 3:47 PM
Abbi Samuels, FNB activist, on the June 18 Emergency Breakfast
Hi everyone!
...Jessica York from the Sentinel called me about an hour ago asking me what happened at our breakfast
today. She was on her way to another appointment when she got the call (thanks to the person who made the
call!), so she sent her photographer there but, according to her, when he passed by, the police had left and all of
the tables were on the edge of the sidewalk. She wanted to know what happened so I explained and asked her if
she wanted some pictures so she can count the police cars herself. I was able to get a hold of Zav who did take
pictures, which I'm extremely grateful for! Hopefully, he'll be sending the pictures to the Jessica....
When I got there about 9:30, there was one CHP there. I wonder how he got notified so early???? He
asked us to move our tables down the street and out of his jurisdiction. He was very polite. In fact, he supported
Food Not Bombs in what we do letting us know during his childhood he experienced being homeless a lot! He
actually was very kind! He asked us to simply get a permit and the process was quite simple. I proceeded to tell
him that we don't get permits and our permit was our first amendment and we were protesting the
Criminalization of the Homeless.
So, we moved our 5 tables about 30 feet down. He said he would ask his Sargent if that was the
Highway Patrol's jurisdiction. The Sargent arrived and told us it was still within their jurisdiction. Even though
we explained that we would be leaving in about an hour, around 11:00am, they said they would be writing out
tickets for trespassing and taking our food away. I frantically started making phone calls since I didn't want our
arrests to be all for nothing.
At that point, I asked someone to move the literature table back in a more prominent position (back to
the original place) and said, 'I may as well set up here waiting to get arrested'. I made sure Sammy, my dog, was
safe, and that the most important items would get packed away with Robert's help. Thanks, Robert! I would say
about 20 cops lined down the sidewalk on Route 9. Then Lee came by and suggested to move our tables to the
sidewalk. So we did.
At that point, the police moved away, conferred, asked to speak to me and others and explained that they
would be leaving and if they get a call complaining about blocking the sidewalk, they would come back and try
and work it out with us. They also asked if we would be having another breakfast next week and I told him we
didn't have plans but I'm not in charge.
The group may decide differently but I wasn't aware of any plans for a breakfast next week. I told them I
was sorry they wouldn't be arresting me, cause I was sure looking forward to having an interesting press day
with pictures of them taking away food for the homeless! They smiled, shook hands, and thanked us for being
polite and left! Now I know everyone will have their own version of what happened. This is my experience. :)
My lesson today is to be more prepared with people with more cameras and still cameras! Tried getting a
hold of Alex... John Colby was there but I don't believe he got any video of our actual breakfast which shared
food with about 40-50 people today!
THANK YOU SO MUCH for your SUPPORT! Even though I was the only one, I believe, who was
willing to get arrested, I could feel the support from several people around me! Thanks Robert, Lee, Pat, John,
Kevin, Ray, Steve and Keith(on the phone), Meredy, Coral, Cat, and others! Sorry if I left out your name. Some
don't want to be mentioned so I'm excluding them! Don't have Lee's email address!
THANK YOU!
Abbi
§June 18 Pictures
by avid reader Wednesday Jun 24th, 2015 3:51 PM 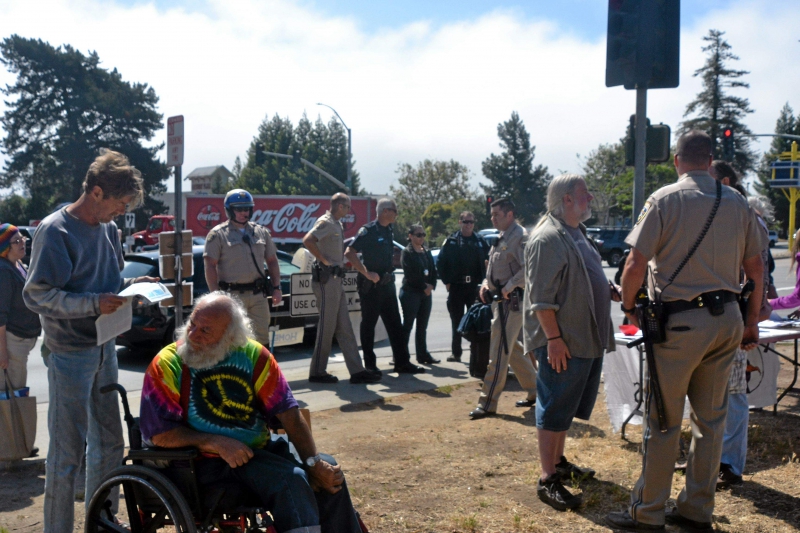 original image (3456x2304)
Picture from the June 18 breakfast.
Add Your Comments
LATEST COMMENTS ABOUT THIS ARTICLE
Listed below are the latest comments about this post.
These comments are submitted anonymously by website visitors.