by Fernando A. Torres
With zero money and the indifference of the big-money media, long-time Mission singer and activist's throwing his guitar into mayoral race. 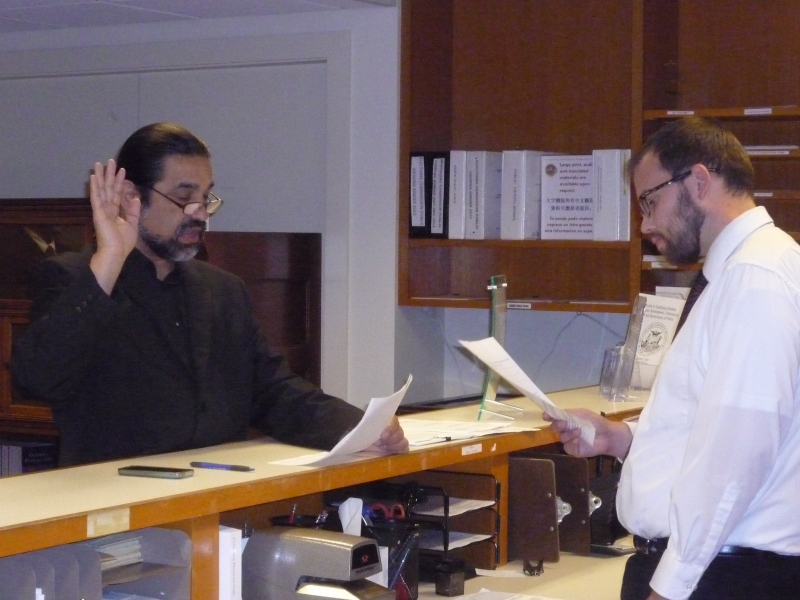 original image (3072x2304)
With over one hundred volunteers, zero money, the indifference of the big-money media and against all odds, activist, singer and long-time Mission resident, Francisco Herrera announced a few weeks ago his intention to run for the highest political office in the city.

So far, two other candidate has shown interest to be in Lee's shoes. The shortage of candidates may seem surprising or better said, astonishing, considering that the city, paraphrasing the mayor himself, is going through one of the most serious social crisis in its history.

Because of this crisis, "we asked ourselves: how is it possible that Ed Lee enters another year without any opponent? No challenger who can say: something has to change? There are civic responsibilities one has,” said Herrera in his office at the barrio La Misión. “We have an alternative popular plan. (It is) the vision of what works or what helps the working people of San Francisco."

We are in a crisis. We are being pushed out of here

This is the first time Herrera will run for a public office. One of the main focuses of his campaign is stopping the exodus of the various communities which, according to Herrera; is the essential characteristic of the city. "San Franciscans are very committed to the sense of social change for the common good. The richness of the city lies in the diversity of its neighborhoods... and it is that precisely which is being destroyed. We are lacking the political will to listen and implement the wisdom of the neighborhoods. This is our goal: to work for the common good.

"We are in a crisis. We are being pushed out of here!” Mayor Lee’s policies has allowed the entry "of big corporations; an overwhelming capital that is causing much damage to the working community. We have almost 4,000 young people who have had to leave San Francisco and live in other cities because they can no longer make their future here. Nearly 1,700 children live or in cars or huddled on a living room couch because it is impossible to rent an apartment here. The murder of Alex Nieto and Amilcar Perez-Lopez, the suspicious fires...," Herrera said.

The task for Herrera will not be easy; It is either big money or the popular support. Candidates have to pay $ 5,706 (2% of the Mayor's salary of $ 285,319) or collect 11,412 signatures. Miguel Perez, coordinator of the Herrera campaign, said they chose the latter. "The traditional politician pays this amount, but what we are doing is creating a movement. This does not begin and end with the campaign of Francisco. This is an attempt to create a larger movement,” he said.

In the last election the city had 650,000 people registered to vote but only 120,000 voted. "Elections in general cost 25,000,000 in a city with a population of 980,000. So what we're saying is, 'this is a tyranny' this is a small group of people in the driving seat of a city where the rest of the people are not even aware or involved, or interested, so what we are doing is working with the youth and make them see that we are in an emergency.

"Until 2004, we (latinos) were 13% of the population and now we are about 8%. We are losing people. And we are not alone as there are other ethnic groups leaving the city. This is a matter of survival for us as a community, as a political sector, as an alternative, as San Franciscans. For many of us, this is like the last battle, the next one will probably be in Oakland," said Perez.

The hemorrhage must be stopped

Saint Francis vs San Francisco. According to the Mission Economic Development Agency and the Council of Community Housing Organizations over past decades, buyouts, landlords harassment and evictions have removed more than 10,000 residents of which, at least 8,000 are Latinos. The US Census estimated that from 2000 to 2013, 4,000 Latinos have left the Mission.

Displacement and ongoing evictions - an average of 800 a year, are "a hemorrhage and to stop it pressure must be applied before we can start the healing.  And it is not a band-aid that we need. (Healing) can only begin if we can bring the wisdom of the communities, not an individual group nor a person, together. Creating a plan for the whole city. Stop the bleeding, save City College, (provide) decent wages and access to health care, stop displacement and evictions so people who work here can live here, " he said.

Now it is time to say yes: si se puede

From Mexican parents, Herrera, 52, was born in the border town of Mexicali. He studied political science and graduated with a master's degree in theology. "For my family, faith always meant community service. Faith will always be hand to hand with social commitment, otherwise it's just a mockery," he said.

Before moving to the Bay Area, Herrera worked in Logan Heights, one of the poorest neighborhoods of San Diego. "I found a Jesuit community, and I joined them to enrich my spirituality, to serve the people, the needy, better."

The ex-seminarian Chicano has a bulging experience working with community organizations. In the early eighties he supported the refugees in Panama, Guatemala and Honduras. During the war in El Salvador he worked in shelters serving victims of violence. He works with Mexico's International Christian Secretariat of Solidarity with the Peoples of Latin America, and worked with community and religious leaders such as Bishop Samuel Ruiz Garcia, Pedro Casaldaliga and Rigoberta Menchu.

In Tijuana, and Northern Baja California Herrera worked in orphanages and community support organizations such as the House of the Poor and the House of the Immigrant. In San Jose he worked with women survivors of domestic violence. In Los Angeles, Oakland, Santa Barbara and San Francisco, with his guitar on his back, he helped found shelters for displaced people and immigrants.

“The guitar, the arts, is what helps us to feel from the heart. To think from the heart means a banquet where everyone can eat, it means a decent education in which our children learn to think and feel. Too much money is going to big corporations and, like Google or Twitter, they are not paying their fair share of taxes. "For too long social movements have been movements of the 'No', now it is time to say 'Yes'; si se puede.” Herrera said.

##
Related Categories: San Francisco | Arts + Action | Government & Elections | Health, Housing & Public Services
Add Your Comments
Support Independent Media
We are 100% volunteer and depend on your participation to sustain our efforts!