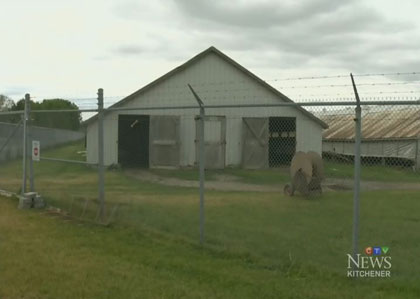 In a communique received by the Animal Liberation Press Office, anonymous activists have taken credit for the liberation of approximately 1600 captive mink from an Ontario, Canada fur farm, mink destined to be killed so that their skins can be sold to the fashion industry.

The communique reads in full:

"As many as 1,600 mink were released from cages at the Glenwood Fur Farm (4216 Perth Line 9) in St. Marys, Ontario late on May 30. According to media reports, fencing that surrounds the farm was cut and a gate opened. Animals in two sheds were released, and breeding cards removed."

Imprisoned in cages for life, or mercilessly trapped with painful leghold traps in the wild, fur-bearing animals killed to make unnecessary fashion statements are forced to endure intensive confinement, compared to the miles of territory these still-wild animals would enjoy in their natural state. The natural instincts of these captive animals are completely frustrated; self-mutilation, sickness, infection, poor sanitation and the sheer stress of confinement lead animals in captivity to premature death. When they do survive, animals of sufficient size are killed by anal electrocution or gassing, then skinned. In addition to liberating the wild animals destined for a certain, painful and agonizing death, another goal of liberationists is to cause economic damage to fur retailers and farms; dozens of stores and fur farming operations have seen economic ruin since "Operation Bite Back" began by the Animal Liberation Front in the 1990s.

Those concerned with the truth should not be misled by claims of those with economic interests, for instance ridiculous stories that the animals released are domesticated and unable to survive in the wild, or that the animals voluntarily returned to their cages, or that they froze to death or starved within hours, or were immediately run over by automobiles or eaten by household pets. Scientific studies have validated that these animals remain genetically wild and are able to survive in a wide range of habitats.

The Animal Liberation Front and other anonymous activists utilize economic sabotage in addition to the direct liberation of animals from conditions of abuse and imprisonment to halt needless animal suffering. By making it more expensive to trade in the lives of innocent, sentient beings, they maintain the atrocities against our brothers and sisters are likely to occur in smaller numbers; their goal is to abolish the exploitation, imprisonment, torture and killing of innocent, non-human animals. A copy of the Final Nail, a listing of known fur farms in North America, is available from the Press Office website at http://www.animalliberationpressoffice.org]