“When it comes to ensuring the public’s health and protecting our water and air, Jerry Brown has failed,” said Schlosberg. "Mark Nechodom is one of many in the Brown Administration who have looked the other way as oil companies inject poison into underground drinking water, spill oil onto our beaches and spew methane into the air." 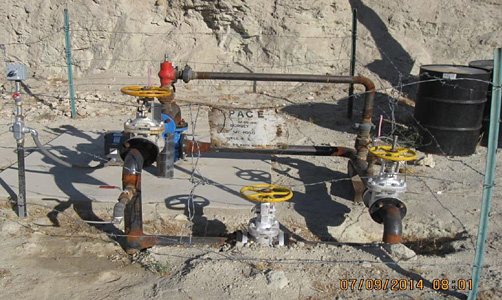 Mark Nechodom, the controversial director of the California Department of Conservation, the agency that oversees the Division of Oil, Gas, and Geothermal Resources (DOGGR), resigned on Thursday, June 4.

DOGGR is the agency charged with regulating the state's oil and gas industry. Governor Jerry Brown in 2011 appointed Nechodom, who is considered very friendly to the oil industry, to the post in order to expedite permits for oil drilling in Kern County and elsewhere.

The lawsuit alleges that "The Oil Companies, Governor's Office, Director of Conservation Mark Nechodom, State Oil & Gas Supervisor Tim Kustic, Director of the Kern County Planning and Development Department Lorelei Oviatt, DOGGR, WSPA, CIPA, and others known and unknown, formed an "enterprise" ("the Enterprise") to achieve through illegal means the goal of increasing oil production and maximizing profits and tax revenue by allowing the Oil Companies to inject salt water into fresh water in violation of the Safe Drinking Water Act."

That's not the only suit filed challenging the agency's "permits to pollute." A lawsuit filed on May 7 by Earthjustice in Alameda County Superior Court, on behalf of the Center for Biological Diversity and Sierra Club, challenged recently unveiled “underground injection control” regulations from DOGGR.

"The regulations allow oil companies to continue injecting oil industry wastewater and other fluids into protected aquifers until February 2017, in violation of state and federal law and despite a water-scarcity crisis caused by the worst drought on record," according to a statement from the groups. "DOGGR pushed the rules through in just a few days, characterizing inconvenience to the oil industry from interrupting its illegal injections as a public 'emergency.'" (See interactive map: http://www.biologicaldiversity.org/publications/maps/highlighted_maps/enhanced_oil_recovery_wells.html).

Nechodom told lawmakers earlier this year that regulators “all fell down” in protecting the state’s water supplies.

Jason Marshall, the Conservation Department’s Chief Deputy Director, will head the tainted department while a permanent replacement is sought.

Attorney Rex Parris, whose law firm filed the RICO lawsuit, said in a written statement Friday, “We are not surprised that Nechodom resigned a day after the filing of this lawsuit. We are confident he is just one of many resignations to come.”

Mark Schlosberg, organizing director with Food and Water Watch, a member organization of Californians Against Fracking, responded to the resignation by saying it points to the larger failure by the Brown administration to protect California's water and air.

“When it comes to ensuring the public’s health and protecting our water and air, Jerry Brown has failed,” said Schlosberg. "Mark Nechodom is one of many in the Brown Administration who have looked the other way as oil companies inject poison into underground drinking water, spill oil onto our beaches and spew methane into the air."

"It is incumbent upon Gov. Brown to hold the oil industry and his own state regulators accountable and protect Californians from these inherently unsafe practices. Nechodom’s departure does not let Brown off the hook," he concluded.

No comments from Nechodom or the Natural Resources Agency were available at press time.

While Brown spouts off about his carbon trading and "green energy" policies at photo opportunity after photo opportunity, he is currently committed to the expansion of fracking in California, spurring increasing resistance to his Big Oil-friendly policies by environmentalists, Tribal leaders and fishermen.

Brown has also continued and expanded some of the worst environmental policies of the Schwarzenegger administration, including the Bay Delta Conservation Plan (BDCP) to build the twin water export tunnels and the Marine Life Protection Act (MLPA) Initiative to create questionable "marine protected areas."

In one of the biggest environmental conflicts of interest in California history, the Brown administration approved the implementation of so-called "marine protected areas" on the South Coast created under the leadership of a Big Oil lobbyist. Catherine Reheis-Boyd, President of the Western States Petroleum Association, chaired the MLPA Initiative Blue Ribbon Task Force for the South Coast, as well as sitting on the task forces for the Central Coast, North Central Coast and North Coast.

The "marine protected areas" created under the leadership of her and other corporate operatives fail to protect the ocean from oil spills, oil drilling, fracking, pollution, corporate aquaculture, military testing and all human impacts on the ocean other than fishing and gathering.

In a bizarre scenario that the mainstream media and most of the "alternative" media have failed to discuss, four "marine protected areas" now being fouled by the Santa Barbara Oil Spill - the Goleta Slough, Campus Point, Naples and Kashtayit State Marine Conservation Areas - were created under the oil lobbyist's "leadership." If that isn't the proverbial fox guarding the hen house, I don't know what is.

Big Oil is able to exert enormous influence over regulatory bodies like DOGGR and the MLPA Initiative because it is the largest and most powerful corporate lobby in the state. The Western States Petroleum Association spent a record $8.9 million on lobbying in the California in 2014, nearly double what it spent the previous year. WSPA spent $4.67 million in 2013. (http://www.eastbayexpress.com/SevenDays/archives/2015/02/06/big-oil-group-spent-89-million-last-year-lobbing-jerry-brown-and-california-officials)