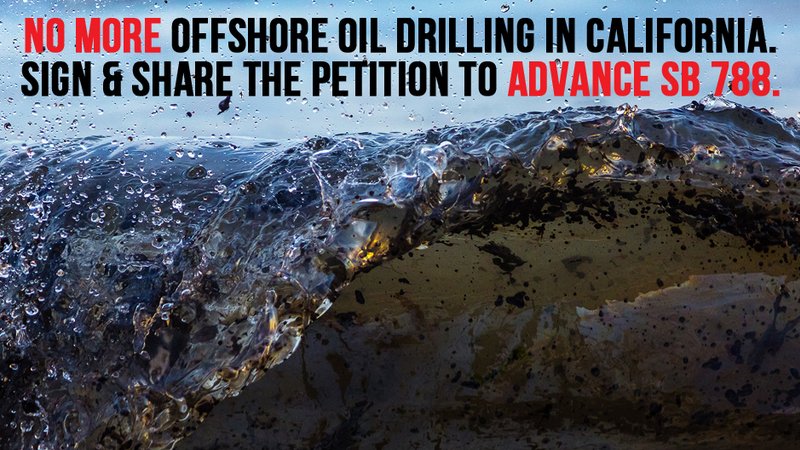 In a victory for fishing groups, Indian Tribes and environmental organizations, SB 788, a bill to ban new offshore oil drilling in a nearby "marine protected area" in the Santa Barbara Channel known as Tranquillon Ridge, passed off the Senate floor.

The vote on the bill, jointly authored by Senator Mike McGuire (D- Healdsburg) and Senator Hannah-Beth Jackson (D-Santa Barbara), was 21-13.

The vote took place two weeks after a ruptured pipeline, owned by Plains All-American Pipeline, led to a devastating oil spill along the Santa Barbara County coastline. The state and federal governments are currently cleaning up the spill - and the dead birds, mammals and fish killed by the spill.

In 1994, the California Legislature banned any new offshore oil and gas leases when it passed the California Coastal Sanctuary Act, according to a news release from Senator Jackson's office. But a loophole in state law left Tranquillon Ridge, which extends into state and federal waters, with reserves that are currently being tapped in federal waters from Platform Irene, uniquely vulnerable to offshore drilling.

In 2007, Tranquillon Ridge was designated as a "marine protected area" under the Marine Life Protection Act (MLPA) Initiative because of its sensitive marine ecosystem, according to Senator Jackson.

"The Refugio Oil Spill has been a dramatic wake-up call, reminding us just how destructive and dirty oil can be, " said Jackson. "Tranquillon Ridge is one of the most important bio-regions on the planet. It is a place of extraordinary and wonderous diversity. If there's ever a place and time where were should commit to no new offshore drilling, it should be here, in this extraordinary place known as Tranquillon Ridge, and it should be now, when the consequences of oil - oil-covered birds and an oil- drenched coastline - are so fresh in our minds."

She added, "California's coast is truly a worldwide wonder. Its natural beauty attracts 150 million visitors annually from all across the planet. It is a core part of this great state's identity and our coastal economy is a main driver of our statewide economic engine. In the wake of last month's devastating oil spill, we cannot afford to wait any longer to permanently ban new oil drilling off our coast."

State Senator Jeff Stone (R-Murrieta) opposed the bill, saying it will cost the state millions of dollars in potential revenue as well as new oil industry jobs, according to the Los Angeles Times.

“'This bill, I think, sends the wrong message about oil and gas production in our state,' he said. While he said green energy should be pursued, 'Oil and gas are still an important part of the equation' for meeting the state’s energy needs," the Times reported.

Reheis-Boyd also served as the Chair of the Marine Life Protection Act (MLPA) Initiative Blue Ribbon Task Force to create "marine protected areas" on the South Coast. In a bizarre irony, four of the reserves created under Reheis-Boyd's "leadership" are now being fouled by the oil from the Plains All-American Pipeline spill. The pipeline company is a "proud" member of the Western States Petroleum Association!

You can expect WSPA and the oil industry to put up a big battle to stop SB 788 from passing through the Assembly.

You can sign the petition in support of SB 788 at: http://www.senatormikemcguire.com/protectourcoast/