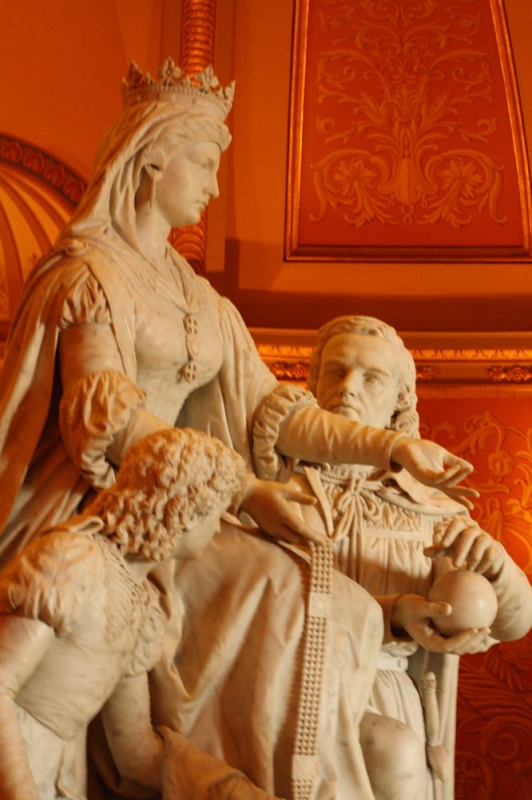 original image (666x1000)
Califia (aka Calafia) is the name of a legendary Black Amazon warrior queen, associated with the mythical Island of California. The State of California is thought by some to be named after Queen Califia.

A modern Califia image has also been depicted in art present at the historic California Room, today John Burton Room in the California State Capitol.

The legend of Queen Califia dates back to the novel Las Sergas de Esplandián (The Adventures of Esplandián), written around 1510 after the Moorish influence of the Iberian Pennisula was nearly complete. The legacy of Jewish, Islam and Catholic conflict is woven into stories by Spanish writer Garci Rodríguez de Montalvo: “It is known that to the right of the Indies there exists an island called California very near the terrestrial paradise; and peopled by black women among whom there was not a single man since they lived in the way of the Amazons. They had beautiful robust bodies, spirited courage and great strength. Their island was the most impregnable in the world with its cliffs and headlands and rocky coasts. Their weapons were all of gold . . . because in the entire island there was no metal except gold. And there ruled over that island of California a queen of majestic proportions, more beautiful than all others, and in the very vigor of her womanhood. She was not petite, nor blond, nor golden-haired. She was large, and black as the ace of clubs.”

But the prejudice of color did not then exist even among the most brazen-faced or the most copper-headed. She was reputed the most beautiful of women; and it was she who accomplished great deeds, she was valiant and courageous and ardent with a brave heart, and had ambitions to execute nobler actions than had been performed by any other ruler — Queen Califia.

In 1536 when Conquistadors of New Spain Government officials led by Hernán Cortés, his crew and over 300 free and enslaved Africans arrived at what is known today as Baja California, they believed that they had arrived on Califia's land in a military campaign of plunder.

The name “California” was first thought to be used by Cortés to describe Baja and the claim for New Spain, based in Havana, Cuba for the Spanish crown.

By 1770, the entire Pacific coast controlled by Spain had been given the name California, and the Spanish speaking people who lived there were called Californios. A portion of the original of the document Las Sergas de Esplandián was translated by Edward Everett Hale for the Antiquarian Society, and the story was printed in the Atlantic Monthly magazine in 1864.

END_OF_DOCUMENT_TOKEN_TO_BE_REPLACED
Add Your Comments
Support Independent Media
We are 100% volunteer and depend on your participation to sustain our efforts!