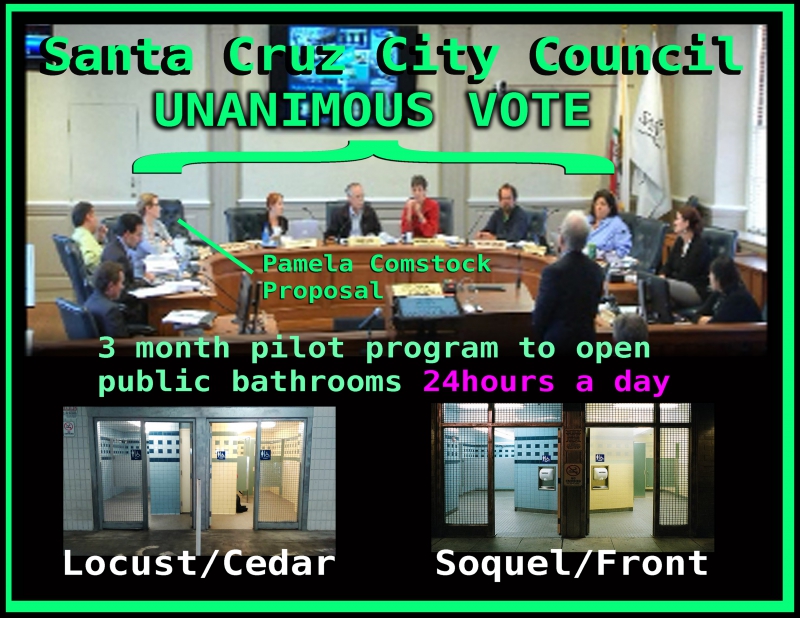 original image (3300x2550)
During the day-long City of Santa Cruz budget hearings by the city council on Wednesday, May 27, councilperson Comstock got the drop on all other councilmembers by going rogue and finding a contracting company to provide after-hours cleaning. Facing down Public Works Director Mark Dettle, Comstock asserted that the problem of "open excrement" in downtown areas necessitates the full-time opening of those two restrooms that are housed in two of the three downtown parking structures.

Councilperson Cynthia Matthews expressed disagreement with the proposal supported by two comments concerning potential vandalism; these were issues raised by Director Dettle which Comstock seemed to regard as less important than the free access to toilets.

The Downtown Bathroom Task Force has instituted a Cleaning Team that has been servicing the city's ONLY CURRENTLY 24hour bathroom, which is the porta potty located on the corner of Front St. and Laurel St. The unit is only cleaned 3 days per week, thus the Team cleans it the remaining 4 days. While Director Dettle insisted that he would look into the problem of the 3 day professional cleaning service schedule, Councilperson asserted that if the 24hour bathroom proposal passes, the porta pottie contract should be terminated because "porta potties are disgusting."

When put to a vote, Comstock's proposal passed unanimously. Now both the Locust St./Cedar St. and Soquel Ave./Front St. public restrooms will (at some point in the future) be open 24hours a day as part of a 3 month pilot project.

The Downtown Bathroom Task Force will continue to clean the 24hour porta potty until either, a new cleaning service is added or that the porta potty is removed in leu of 24 hour access to the two public restrooms in the parking structures. Those two locations have been redesigned in recent years to be more "vandalization proof" because of the see through wire mesh front enclosure and more secure bathroom fixtures.
https://www.facebook.com/pages/Downtown-Sa...
Add Your Comments 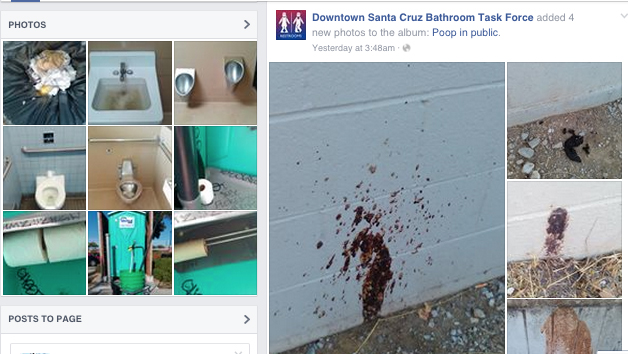 It happens, all you can do is rally the local jurisdiction to do a better job of helping the process happen. This isn't a service that very poor shouldn't be discriminated against accessing.

Please view the facebook page, which is a photographic data repository documenting the city's downtown and park public restrooms. Check it out and Keep Santa Cruz Weird.
Add a Comment
§Cluefest?!
by G
Tuesday Jun 2nd, 2015 5:23 AM
Interesting unanimous vote by the chronically clueless council. Given their past, wondering why they suddenly caught a clue is unavoidable...

Is it graft? What is known about the 'cleaning contractor'?

Meanwhile, back at the accountability; have any of the bigots admitted defeat, clearly and unambiguously? Will their years of damaging hate be noted, or ignored? Will Brent be properly acknowledged for successfully rubbing their faces in it?
http://PeaceCamp2010insider.blogspot.com/
Add a Comment
§Not all that surprising
by Steve Schnaar
Tuesday Jun 2nd, 2015 2:11 PM
Well yes the City Council on the whole has a history of treating homeless people as a problem to be gotten rid of, and I imagine they will in general continue to do so. But if I remember correctly it was Pamela Comstock who joined Micah Posner to push for the existing 24-hr bathroom, which I think they wanted a real bathroom but the best they could get from the rest of Council was a porta-potty.

So I don't see any reason to doubt the sincerity of Comstock's interest to reduce public poop by giving homeless greater bathroom access. The fact that I disagree with her on many other things should not stop me from giving her credit and thanks for making this happen.
Add a Comment
§Peek-a-Boo Bathroom
by Robert Norse
Tuesday Jun 2nd, 2015 5:26 PM
Note that the Locust St. Garage bathroom has been slightly relocated. At its new location it allows passersby a revealing look at anyone sitting on the can inside (torso concealed though).

More privileged city employees, customers of Little Shanghai and presumably other nearby eateries get a special key to the completely closed, private, and lockable-from-the-inside city facility a few yards away for the privacy that the poorer folks don't deserve. Hmm, brings back delightful memories of the Old South.

While I commend Comstock for this initiative, it is only a drop in the bucket (so to speak) with the Homeless (Lack of) Services Center [HLOSC] bathroom now closed at night to those Outsiders outside the sacred locked gates. This makes the "Let Homeless People Drown in Shit Cause the City Won't Clean It" Posner PortaPotty the only 24-hour bathroom available.

It'll be interesting to see how long it takes this "pilot project" to open up. It could be done immediately, of course.

While the Council "studies" Housing at its Special Study Session at 7:30 PM today, there's no indication that even the limited-to-token HLOSC shelter and the broader meal, meal, laundry, shower, and shitter services will be restored in the final June 9th budget vote.

Folks outraged at this situation and planning a community response to this latest attack on the poor should come to the follow-up meeting at 11 AM tomorrow that precedes the regular HUFF meeting at the Sub Rosa Cafe. See:: "Service Shutdown Survival Meeting To Map Out Action " at https://www.indybay.org/newsitems/2015/06/02/18773039.php.
Add a Comment
§congrats to Brent-the leading Homeless Achievist
by sarcastic heckler
Tuesday Jun 2nd, 2015 5:30 PM
first the warming center, now this, good work brent and others.
micha originally came to a HUFF meeting offering to do something for the homeless now that he was on city council. i immediately challenged him to open a 24 hour bathroom. HUFF members agreed and micah went and got comestock to join, (i guess tbsc doesn't like picking up poop on their clean teams). congrats to micah and comestock as well, it takes a lot of courage to have your name associated with poop politically. (when i challenged rotkin to do the same, he claimed it was impossible, vandals would destroy it within 3 days.)

i am glad to hear that santa cruz government has finally figured out how ro run a 24 hour toilet.
Add a Comment
§UNANIMOUS VOTE
by Linda Lemaster
Tuesday Jun 2nd, 2015 6:22 PM
Brava Pamela Comstock,
Bravo Brent Adams and helpers with the "real work".

When's the last time this particular council had a unanimous vote?

Add a Comment
§Generally...
by Robert Norse
Tuesday Jun 2nd, 2015 10:36 PM
...the Council does have unanimous votes. It's the rare vote that involves a division--or such is my experience. But then I haven't been watching every vote.
Add a Comment
Support Independent Media
We are 100% volunteer and depend on your participation to sustain our efforts!